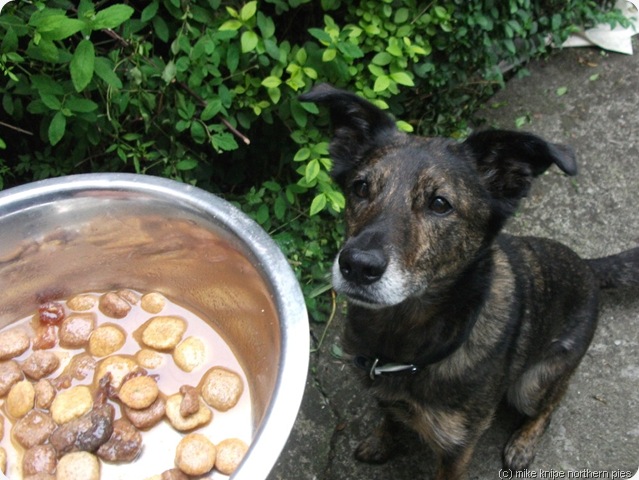 Bruno feigns disinterest…..
Alert readers with good memories may well remember that a while ago I received a huge bag of Supadog dog food which I promised to review. The bag is now almost finished and it’s now time for me and Bruno (aka Superdawg) to say what we thought about it.
Bruno has very simple ideas about food, as it happens. He’s not picky. His views are either scoff whatever it is as quickly as possible or express the view that whatever it is is not suitable for dogs. the latter category mainly involves citrus fruit. So, with Supadog – Beef in Gravy flavour, he was quite enthusiastic. And he’s remained enthusiastic right through the bag. He loves it. He just wolfs it down. 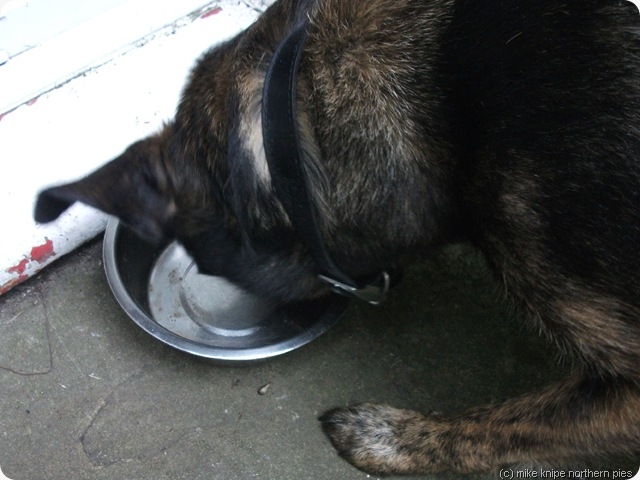 Shortly after……
As for me, if he’s happy, then so am I.
The only thing that  he has a beef about (see what I did there….?) is having to wait for it to cool. The food is a dry food and the “gravy” element is released by adding a quantity of warm water and stirring it up a bit. And then there’s a wait for it to cool. During this wait, I am afraid to say, the dog goes a bit mental. He doesn’t see why, having gone to the effort of filling his bowl, he has to wait any time at all. In the end, I just added more cold water and let him have his evil way. A bowlful takes around ten seconds to scoff, followed by thirty seconds of violent licking to make sure no atoms of nutrition remain in the bowl. 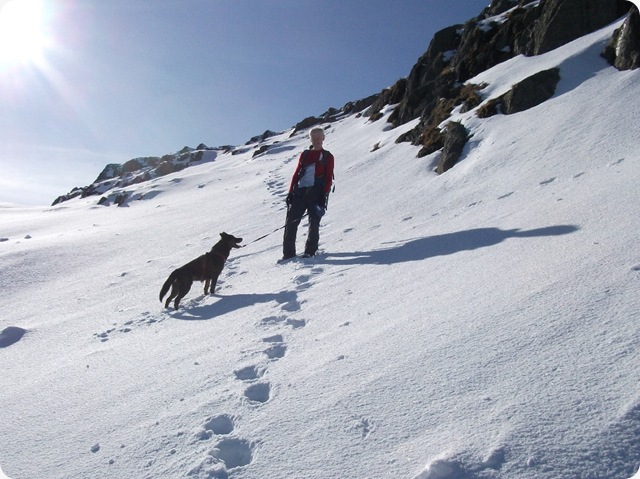 He’s very happy on the stuff and he remains capable of a twenty-miler over the highest bits of the North Pennines with no ill-effects at all.
As far as he’s concerned, he’d quite like another bagful. 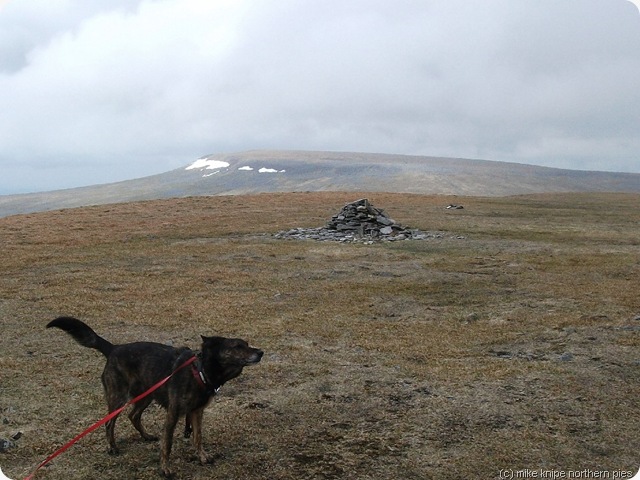 The food is made by Burgess Pet care and they do other styles and flavours, plus food for cats and wabbits and other furry things.
Follow this link for more fax and info http://www.burgesspetcare.co.uk/shop/supadog.html
You know me – If it wasn’t any good, I’d have said it wasn’t any good.
Posted by Mike Knipe at 15:07

That is better than tin meet for a dog. Last time I gave my hound tin meet he hogged it down, went for a pea outside and then walked into the hall looked up at me with the most cute look. Promptly followed by throwing it all up on the floor in the hall.

I am sure that hound of yours appreciates the effort you go to to feed him. Dogs are a joy. Just the throwing up, peeing on the hall rug and the like tends to try my patients. That and the insurance cost and vet bills and the other costs. Cant be without them to be honest.

I think dogs enjoy throwing up, Martin. It doesn't have the same drama as when people do it, although the pre-vomit contractions can be quite violent.
Luckily Bruno has the constitution of a wheelie bin and has a horror of indoor incontinence. Unless its at the vets, in which case it's a mess....