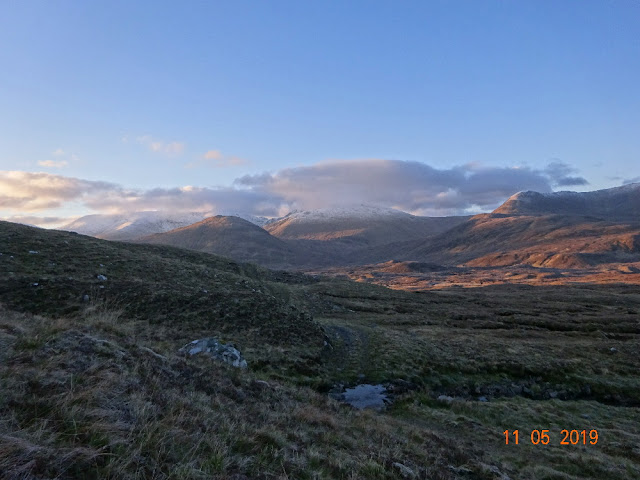 Readers have been quite patient and/or drifting away as me and The Lad had our two weeks of  jollies walking across Scotland. I'm not going to write a blow-by-blow account at this stage, but might save that till the time when it might be more useful - when people are considering applying and needing a bit of insight into what it's all about. Instead, a brief overview is offered here with just a dozen pics out of the 238 I took - mainly, and a bit oddly , all a bit on the slant. 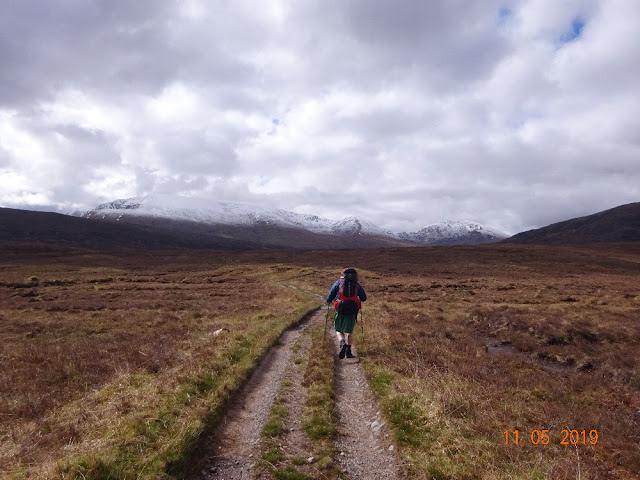 But never mind.
We began well with all trains and planes turning up on time and in the right places. And then we had a nice curry with chapattis in Inverness and stunned the local boozers by winning the Thursday quiz. As we are both English, we weren't allowed to claim any kind of prize. It seems that the locals weren't very up-to-date on current affairs. This is not surprising as they're in the pub all the time and whilst the TV is on, the volume is turned down. It always is turned down in a pub, innit? 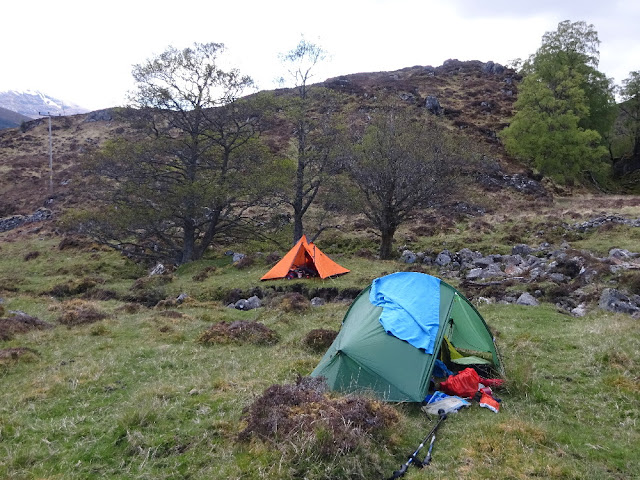 We began at Strathcarron, a little way inland for a coast to coast walk and we wandered Eastwards, meeting Phil Werner and Claire heading Westwards on the Cape Wrath Trail. Oddly enough, he recognised me somehow. During the crossing we met lots of challengers - mainly in the form of Bernie who turned up ahead of us or behind us or, sometimes alongside us.  He's done 23 challenges - I was on my 15th and The Lad was doing his 4th.  That's a lot of miles and several t-shirts. 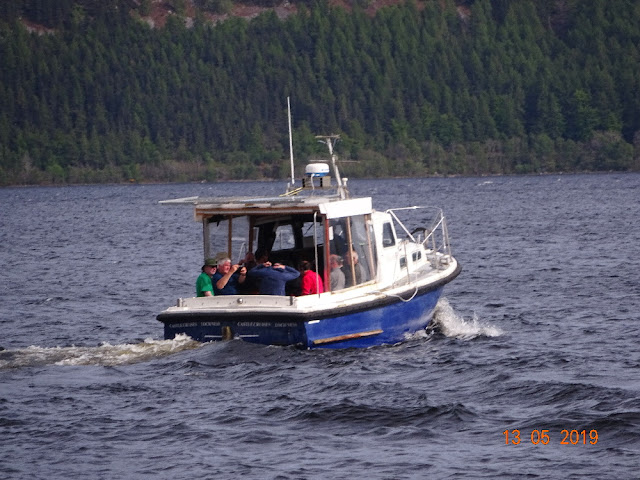 So, on the first day we did just 10 miles - I like to start with a shortish day. Our camping spot was occupied by another challenger but we found another spot on a little platform by a burn and settled in for a very cold and frosty night. 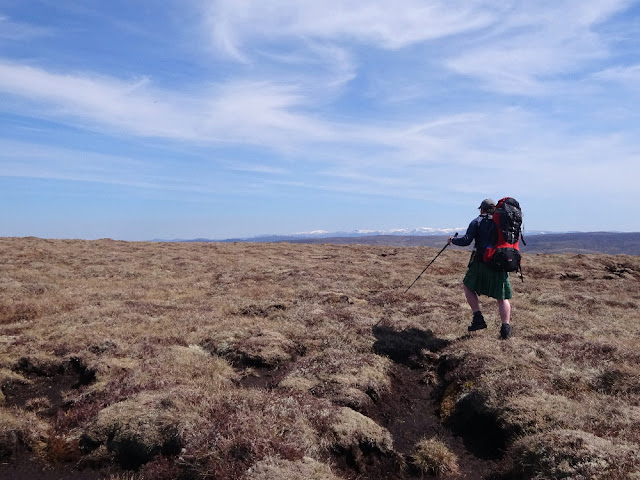 We gave up the idea of a high level route due to snow showers and what appeared to be extensive snow high up - other challengers made the same decision. We weren't equipped for snow/ice so we initially took our low-level route which took us through to Cannich where huuuuge amounts of calories were taken in the form of 2 dinners, a breakfast and a fair dose of beer. 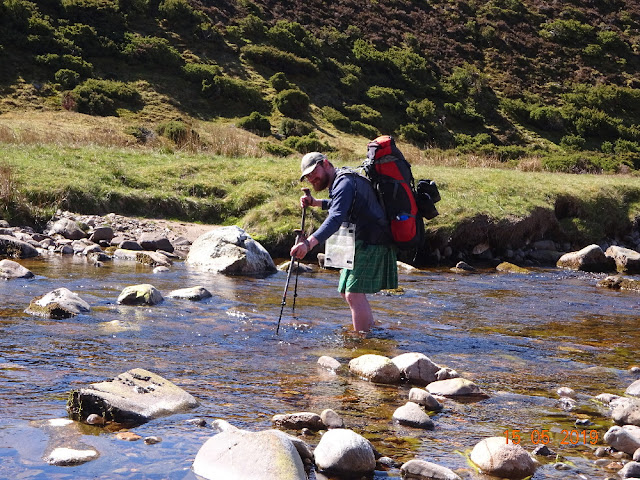 The next day we crossed Loch Ness by Gordon Menzies ferry and hit the Monadliath Mountains where we got temporarily lost due to windfarm roads not being on the map. The sun beat down mercilessly. The son walked quickly ahead, equally mercilessly. We got to Kincraig, which appears to be a bit of a desert for wayfarers and had to walk 2 miles to get some food. John Donohue advised on the Gaelic name for a teatowel which was not only wrong but was a potential cause of conflict when expressed to a gaelic speaker enquiring sarcastically about the clan to which our kilts belonged. (I wanted to reply "Glen Teatowel" but had to resort to "Glen Ribblesdale") This sometimes brought a bit of a stunned or puzzled reaction as they tried to work out where Ribblesdale was. (It's between Airedale and Lonsdale!) 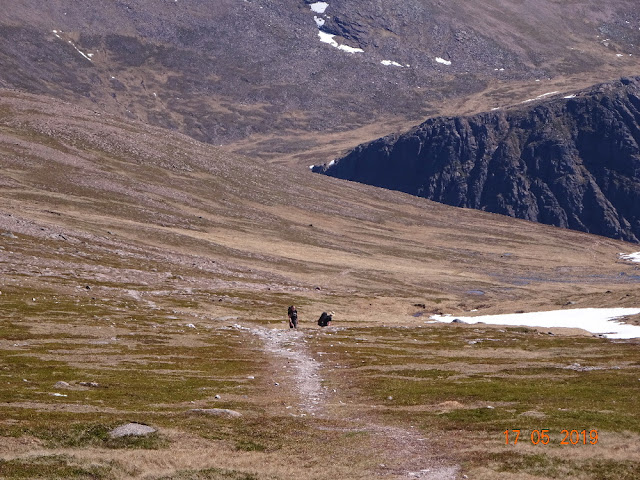 As we pressed Eastwards into the Cairngorms, this issue seemed to become less important. The sun shone till we'd crossed Cairngorm itself and descended by Loch Avon (a spectacularly beautiful spot of which pics will not be published at this point as a bit of a tease). But in the morning, at the Hutchinson Memorial Hut, the weather broke and it rained or showered for the remaining time. 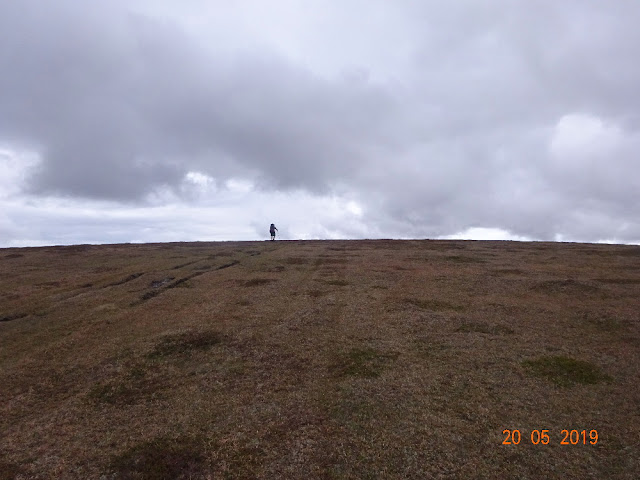 Taking another foul weather alternative put us half a day ahead and we ended up by the Water of Unich (just after spotting an eagle at close quarters). During that night it rained and rained and the waters rose till we eventually had to move and at 4:00 am , dawn broke,  and so did we, arriving at Tarfiside at 9:00 am just in time for breakfast. A close-run thing, we felt.
The remaining was a simple road-walk to Haughs of Benholm where we were treated to a nice cuppa and a chat from a challenger's Mum who lived there. 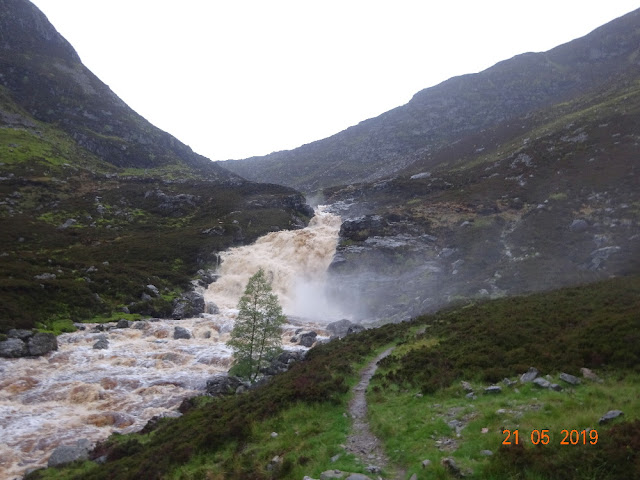 And that was that - just short of 200 miles and a lovely tan and some very skeggy socks. The wearing of the kilt means that skeggy undies are not an issue. It seems there were some 9 kilted men on the chally this time. This is an increase of 6 from last year and is something to be encouraged, I feel....
Posted by Mike Knipe at 22:12 7 comments: 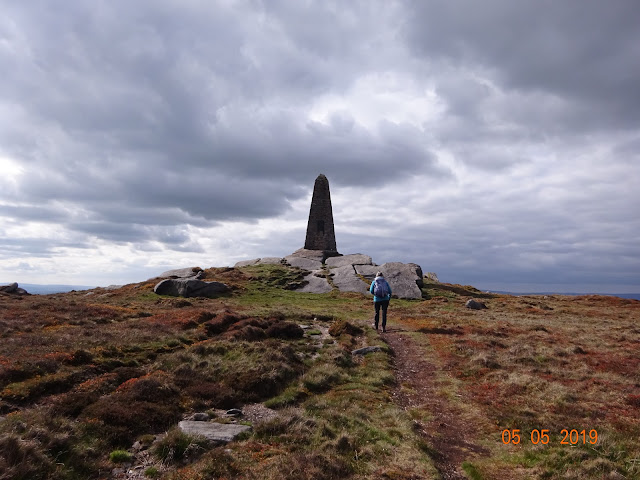 There's been a short hiatus or gap during which I've done three walks - but as I'm setting off on the TGO Challenge quite shortly, there's not time or the will to write anything about the first two - BUT, the series concerning Long Walks (Important Capitals here) - is..er..important, so, I will leave readers with this one. Note that I will not be blogging or tweeting or otherwise using social media in any way during the next 2 weeks whilst me and The Lad attempt to walk across Scotland though the Bumpy Bit. This is not because I have any deep philosophical objection, it's just that both my so-called smart phone and me are utterly incompetent in this respect. ﻿ 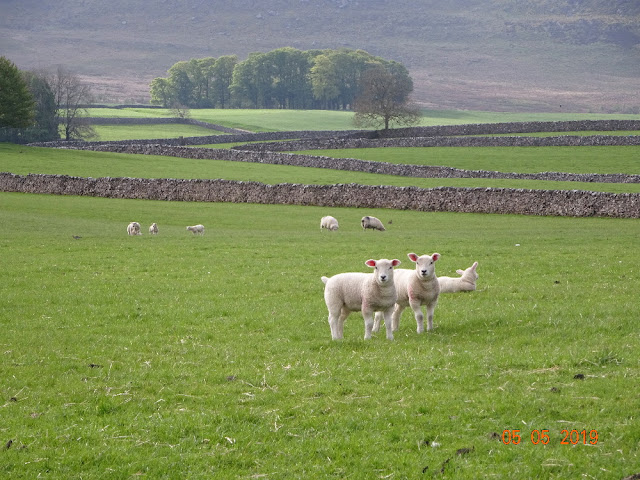 This walk kills two birds with one stone in that it participates in the Long Walks thingy (22 miles, see...?) and it's also a reccy for a walk I'm leading on 1 June on the occasion of the Crook and Weardale bus trip to Skipton during which some shopping and some post-walk boozing are quite  likely I shouldn't wonder. 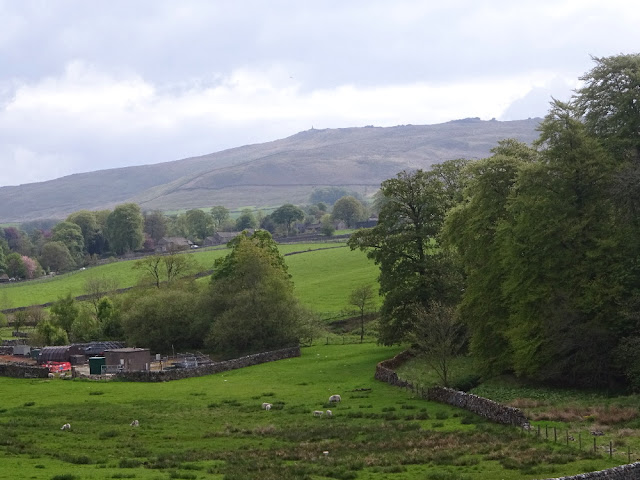 So me, Li Yang, Diane and David left Cracoe at about half past eight on Sunday and wandered through green pastures to Rylstone and then down the Dales High Way to Flasby, over Sharp Haw and via the golf course and into Skipton, where large crowds had gathered to watch some cyclists cycle past. (It was the Tour de Yorkshire aka Le Tour de Yorkshire. N'est pas...  Mon Oncle est sous la table avec la soeur de ma tante. 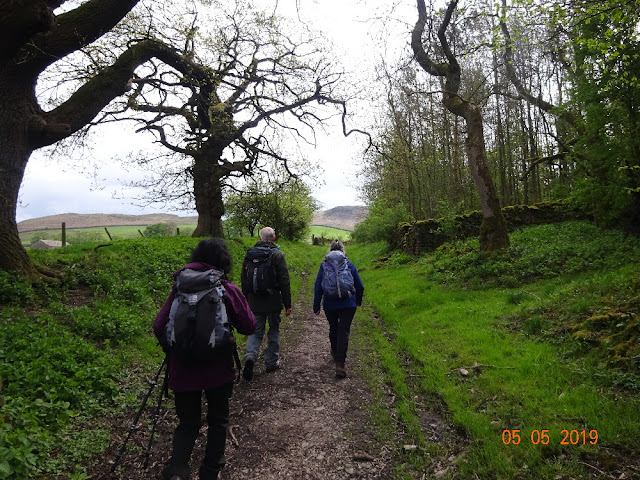 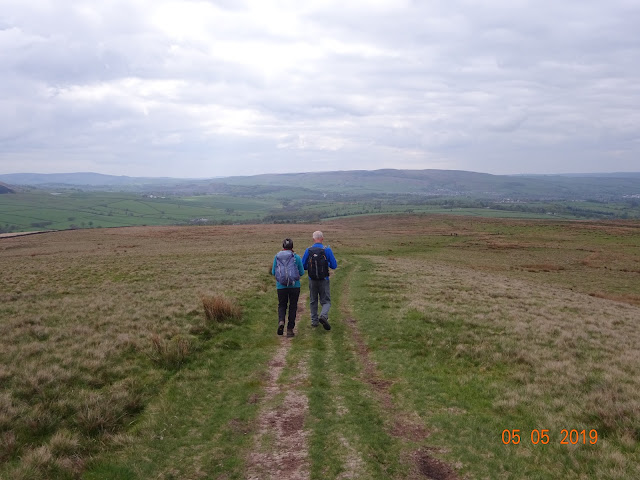 We waited for the imminent arrival of the bikes for a whole hour, being passed by multiple police motorbikes - it seems that each cyclist has three police motorbikes. Or, maybe the cops are just having a bit of a jolly hurtling around the Dales for a change. Many were friendly and squirted their nee-nahs at the local kids and/or waved. Anyway, anti-climax having passed, we progressed on to the delights of Barden Moor. 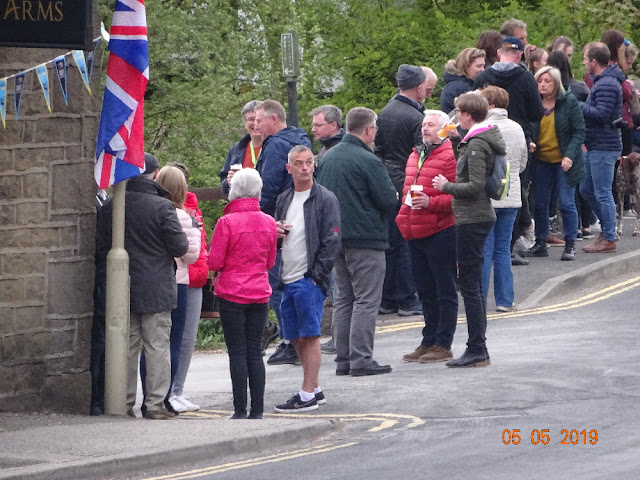 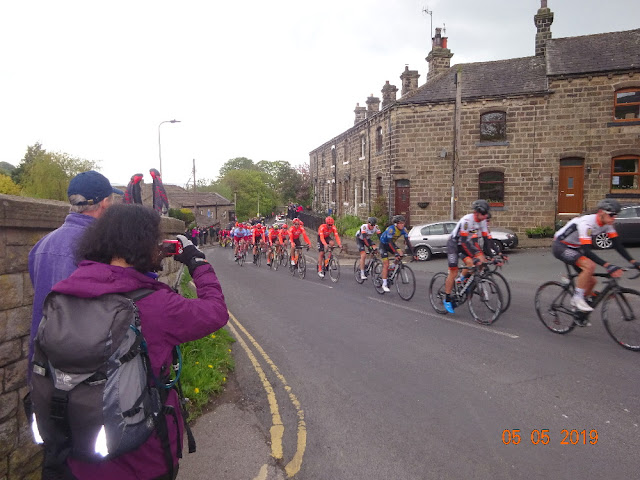 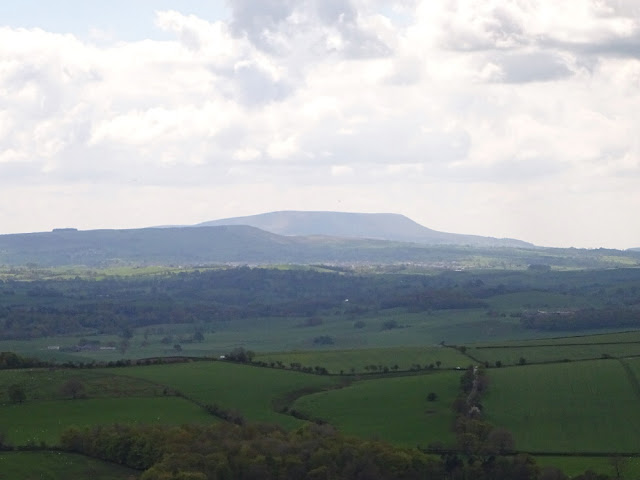 Barden Moor, by it's Western edge has several delights for the walker, but none for the walker with a dog because dogs are not allowed up here, which is why LTD stayed home with a box of bonios and meerkats on the tellybox. to keep him from boredom and tearing up tissues into tiny little pieces. 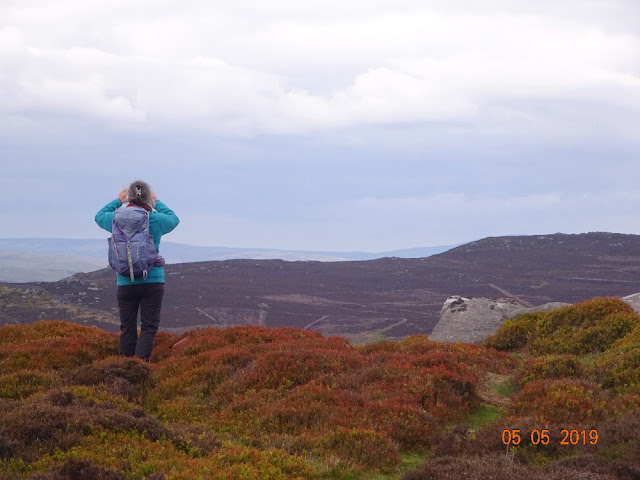 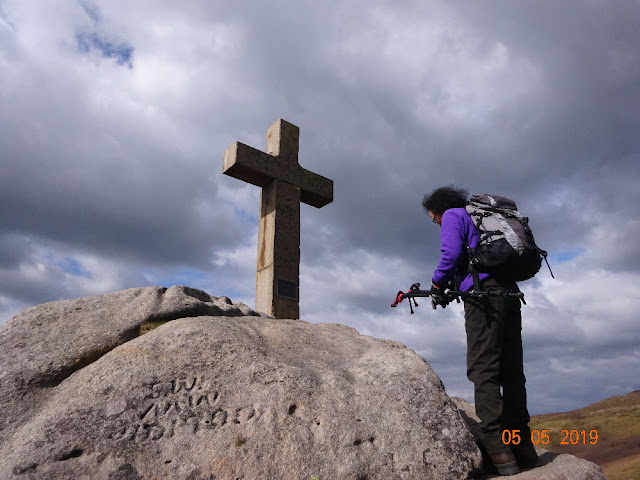 The first of these is Crookrise Crag  - A long line of rocks and slabs providing lots of gritty fun for rock climbers and cracking views for climbers and walkers. This eventually passes and the walker traverses a bit of moorland liberally decorated with unfeasibly big boulders to emerge above a waterfall, which the Ordnance Survey called "Waterfall Gill" but which, traditionally is actually called "Waterfoot Gill" 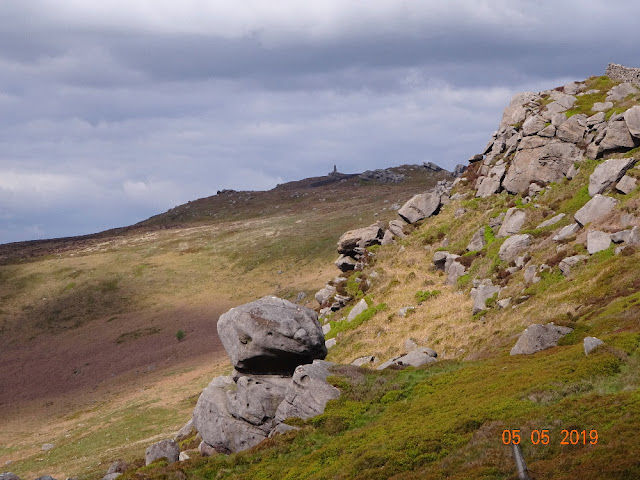 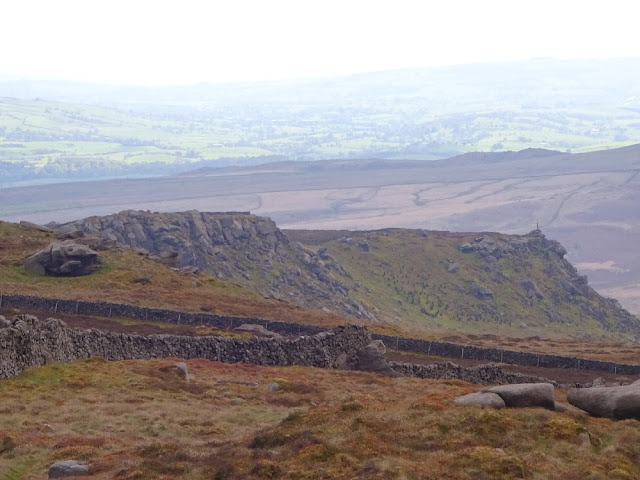 Next is Rylstone Cross - a war memorial for the Parish re-erected in stone in  1995 after the original wooden cross rotted away. Various mindless eejits and brainless prunes, with no respect for their dead and wounded great-grandads have decorated the plaque with felt-tip graffiti. FFS. Had they any appreciation of the massive casualties suffered by the 2 Craven battalions of the Duke of Wellington's Regiment and the other units mentioned on the memorials and the aftermath suffered by the survivors and their families, they might not have scribbled their puerile bollix in such a way.
And then, there's Cracoe War Memorial - an obelisk  a mile or so further on with the initials of the local dead carved into the stones and the names and units provided on a plaque. Happily, this is mostly unreachable by scum with felt tips, although they did leave their lucozade bottles and little yoghurt tubs around as memorials to their visits. (Yoghurt is not a medicine by the way - just a tip, there.....) 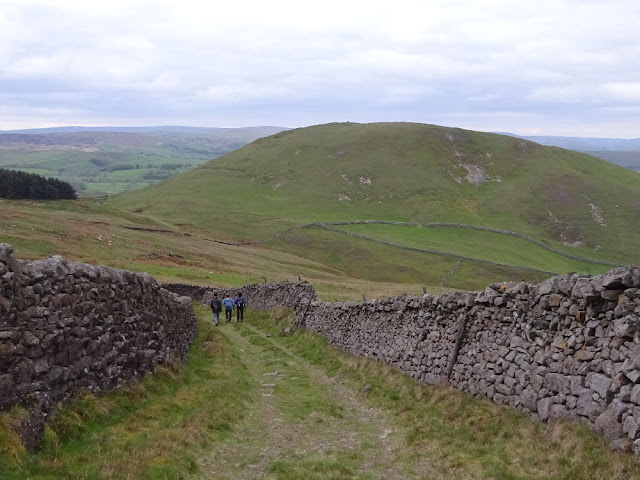 At last a descent to Thorpe is made and a final killer hill (for twenty-mile legs) through more green pastures and a bit of road took us back to the cars which were exactly where we'd left them.
The Crook Ramblers route is the first half into Skipton. It's very nice, quite pretty and so on....  but the best bit is Barden Fell. Crook Ramblers won't be seeing Barden Fell other than from below.
Further Long Walks will be happening over the summer.﻿