In The Gutter With Wolsingham Wayfarers

﻿﻿﻿﻿﻿﻿﻿﻿﻿﻿﻿﻿﻿﻿﻿﻿﻿﻿
﻿
So, last Thursday, I think it was, me and LTD borrowed the wife's car and went off to Bowlees in Teesdale to do such a reccy. We only got lost twice. And, proof that a reccy is a Good Idea came quite quickly in the pastures above Newbiggin in Teesdale (lovely hamlet by the way) - in the form of a stile that was clearly past it's prime and in dire need of a stile MOT. 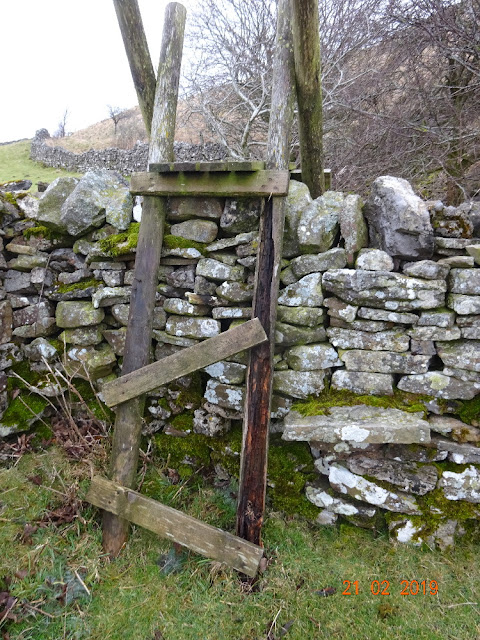 ﻿
﻿﻿
After that, and, following some minor acrobatics involving the complete collapse of the far side of the stile  when I tried to cross it and some scrambling over low wall, it all went swimmingly well. We wandered up the Gutter - in this case, Coldberry Gutter, visited the nearby trig pillar and the also nearby dam and then down through the pastures and woods to Middleton to follow the Pennine Way back to the start, where, the wife's car was still parked. 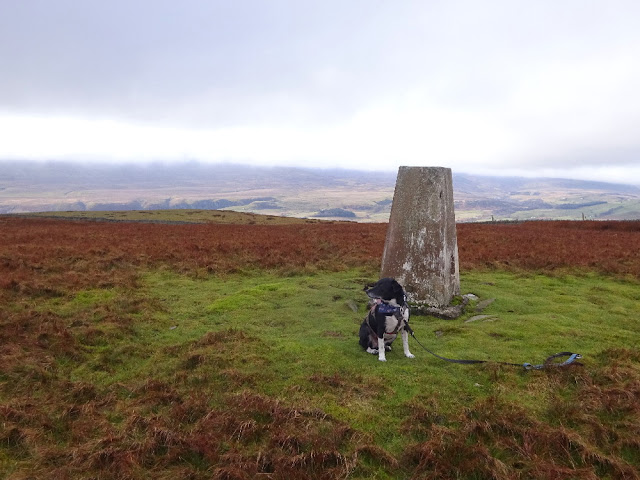 On the day (in this case, Sunday) , 8 people turned up at the car park, plus Hollie The Dog and another two had set off early and were waiting at the top of the Gutter, making eleven of us plus two dogs in all.

Coldberry Gutter is the Gutter mentioned above. This is a double-sided hush meaning that it's gully runs down both sides of the hill. A hush, for those still puzzled by the term, is a man-made feature created by the use of water, often under pressure, to strip off an overburden to reveal a vein of minerals beneath. In this case, it seems that lead was the main target and also, maybe, coincidentally, quite a bit of ironstone. 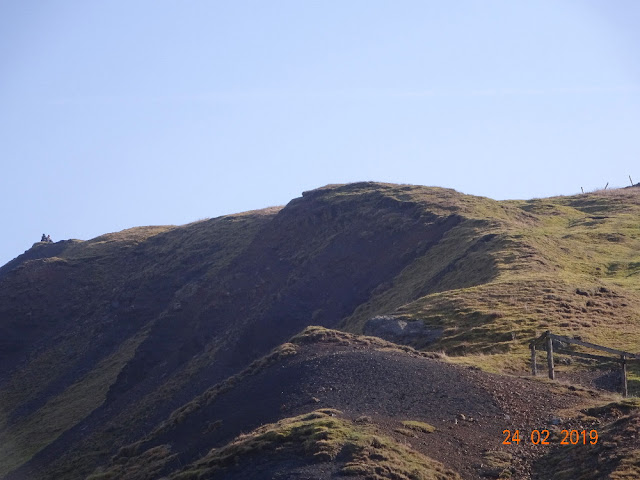 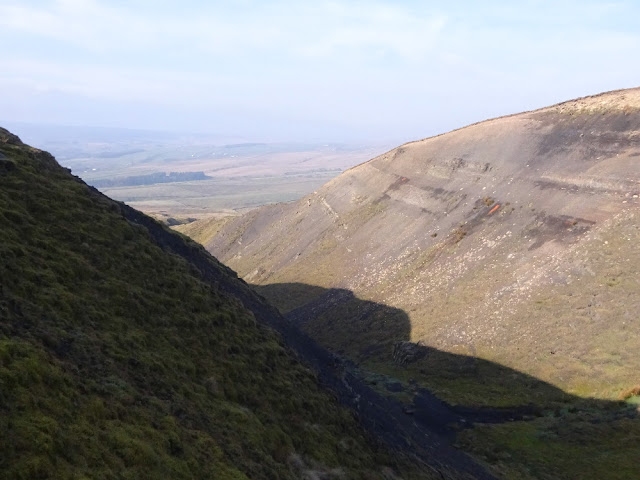 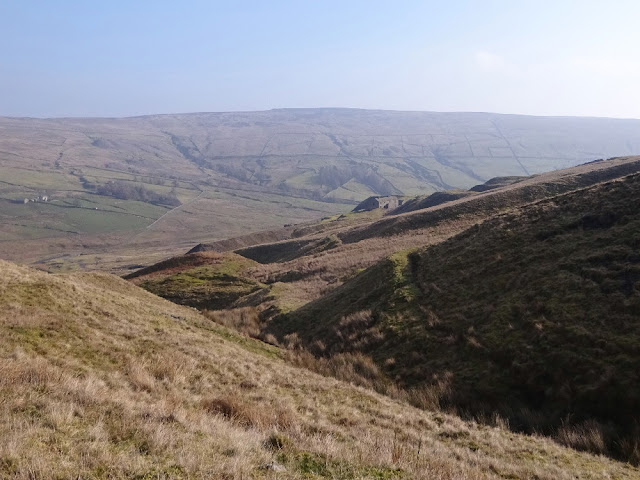 Thus a deep gully has been formed and this forms a relatively easy passage up the hill and down the other side. In our case, I included a short, steep and grassy scramble in order to rendez-vous with the peeps who had set off early.

All in all the walk is just about ten of the Queen's miles and about 1800 feet of up and involves, in order of appearance, some pastures, a bit of quiet road walking, some snowdrops, pastures, the gull and moorland, some more pastures, Raby Estates woodlands and waterfalls, the outer suburbs of Middleton in Teesdale and yet more pastures along the Pennine Way, some with pregnant sheep and others empty save a few rabbits.

Lucky is specially fond of rabbits by the way and likes to try to get into rabbit holes but, he's too fat. 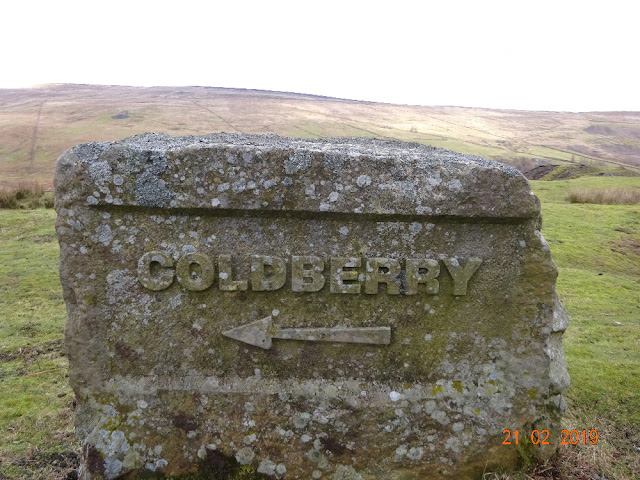 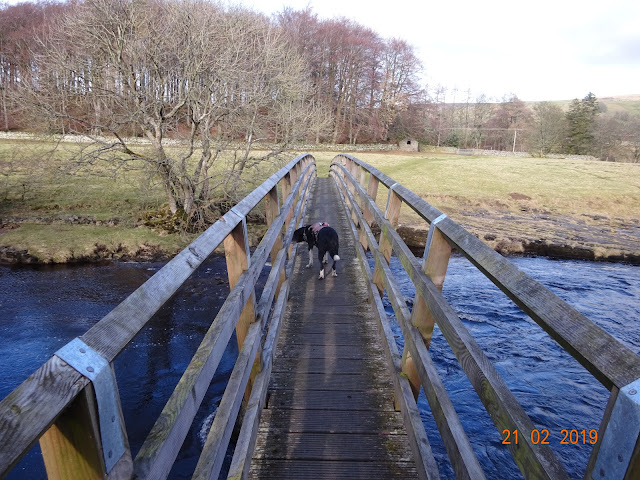 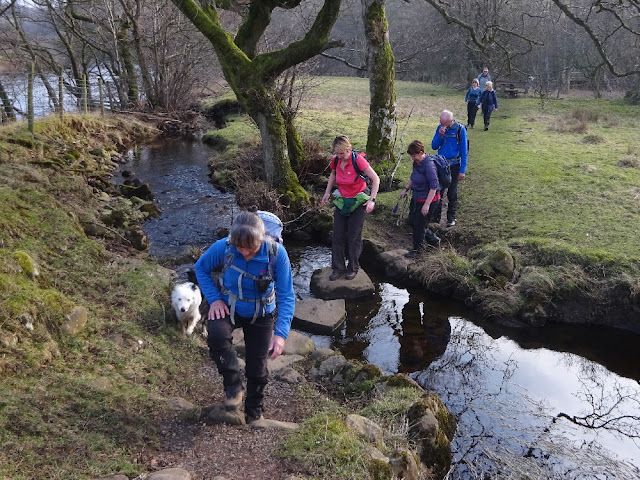 No idea why one of the pics should be aligned different from all the rest by the way. Blogger is very temperamental when it comes to pictures. I've had a real struggle with this....

My daughter sent me a little phrase book at Christmas - "Teach Your Dog Welsh". I've managed to reach him to respond to several useful phrases such as "Stedd" (sit) "Shwmae" (Hello), "Paid" (Stop doing that yer lickle bugger) and "Amswer cinio" (scofftime). In truth, he would respond to any language providing you do the correct gestures.
﻿﻿
﻿
﻿﻿ And so, in order to test out some of these commands/requests In The Field as it were, me and Dawn went to Glan-yr-Afon (also known as Glanrafon) which is just a bit off the A5 on the road to Bala - near the traffic lights, in fact.
This was ideally located for the bagging of some spare Marilyns, and "new" Nutall/Hewitt and various other smaller Tumps in case of bad weather or for longer doggywalks.  It was also quite a good place for Lucky The Dog to practise his Welsh.

We stayed for 5 nights before moving on to more English things.
﻿﻿
So, we managed to bag two Marilyns, thus leaving just 19 to go before entering the Marilyn Hall of Fame, for which a total of 600 Marilyns need to be bagged. These bits of moorland were Mynydd Rhy Ddu , a windfarm;  and Mwdwl Eithin, a lovely piece of squishy and heathery moorland with a very Pennine character - adding a couple of nearby Tumps to make up the totals a bit.

﻿ All of these were performed in excellent spring-like, if windy weather. We struggled to find enough snow to eat (for the dog to eat, you understand. I ceased eating snow in 1963. There was far too much snow in 1963.
On the one day of duff , and in driving deizzle of the kind that gets you really really wet, we managed three Tumps - one of which was a very nice hill-fort.
﻿
Everything in the porch/conservatory thingy dripped for a day or two, Lucky's jacket leaving suspiciously brown puddles. I must wash Lucky's jacket.
.

﻿
﻿
﻿﻿
﻿
﻿ And then, we retreated to the fleshpots of the Travelodge in Glossop where JJ was due to play with some of his musical pals in the Labour Club. In between we visited Geoff and Chrissie and had a fablious walk with three dogs in warm spring-like sunshine, followed by teasted toecakes and refreshments at Geoff and Chrissie's. Geoff is currently in hospital, having given up an important organ to help a friend who's own kidney's are failing. It seems a heroic thing to do, and not something I personally might volunteer for.  Bless 'im and his spare kidney. As for me, I am very fond of most of my organs. I hope he's OK.

And then, after briefly visiting Mouselaw Castle we complete our  tour by visiting The Lad in Nottingham for the occasion of a Ceilidh intended for the raising of cash for the local scout group's participation in a World Jamboree.
﻿
﻿ And JJ was playing again. JJ doesn't half get around.

Enthusiastic readers may have noticed a bit of a hiatus in blogposts recently - this has been due almost entirely by some prune giving me a cough/cold/bad back which somewhat removed my mojo. I think the mojo is now back and tonight I ma going to test my lumbar muscles with an hour's yoga at Frosterley Village Hall. This may well be an error of judgement.

﻿
﻿ And , in other news, I also got elected as secretary for Crook and Weardale Ramblers, so readers should expect a lot more Rambling from me and the dog.