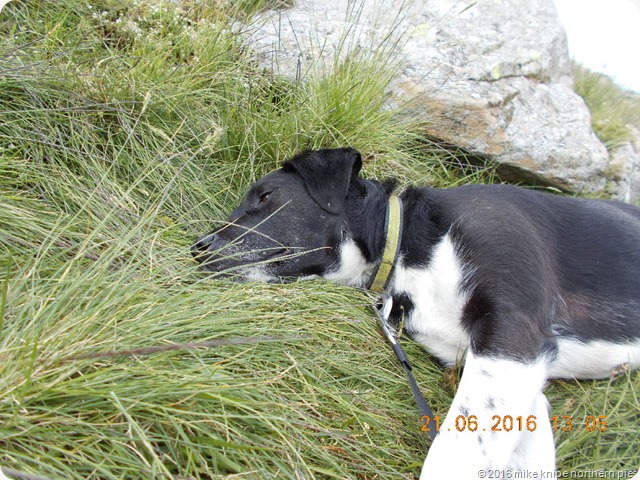 I like to have a camp-out at solstice time and it would be nice to actually witness the sunrise. In the past the solstice sunrise has been missed by a series of unfortunate incidents – too much whisky and a shivery wait on Bolt’s Law resulting in a retreat into a sleeping bag and then waking up at 09:00…. several soltsices involving gales and tipping rain… drifting off into a reverie under a basha on Middlehope Moor and so on and so on. 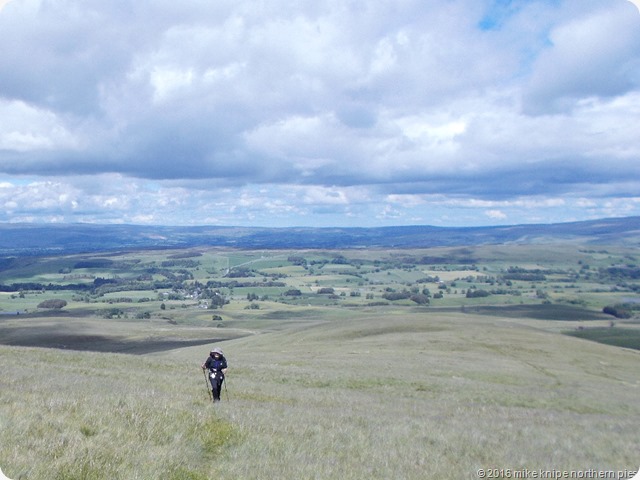 And ,me and Dawn and LTD had recently had a series of camps where we had to get up, feed, pack up and move on for another day’s slog on the beer-trek and the prospect of spending a day camping in one place was attractive as an anti-dote to the hard work… 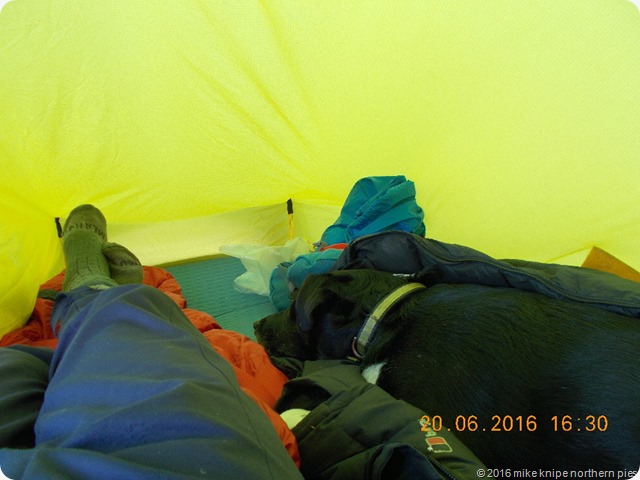 So we decided on a solstice camp for a couple of days in a place where, if an unhidden sunrise were to occur, we would be bound to see it. And then we could spend a day doing nowt at all. Green Bell in the Howgill Fells was chosen. 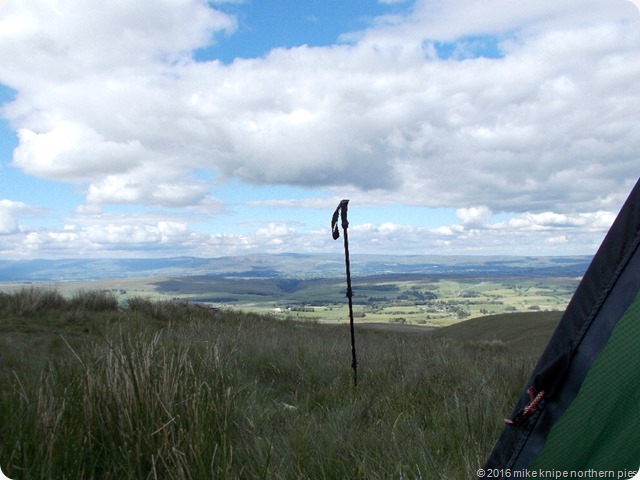 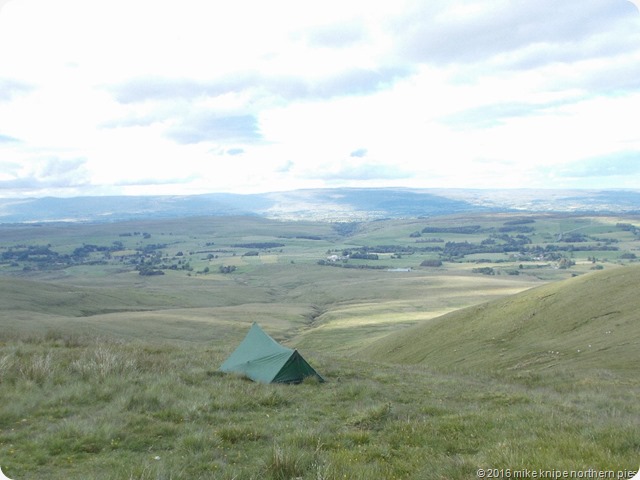 We didn’t quite get to the top. I meantersay, it’s two miles from the outer suburbs of Ravenstonedale where we’d abandoned the knipemobile AND it’s all uphill AND the wind was blowing a bit of a hoolie AND we found a sheltered shelf with an old sheepfold and an equally old sheep plus a little spring of water pure and cold and straight out of the ground. It was only just a little tilted but it was there we spent the next two nights.

And it had a view to the North and East – mainly the North Pennine scarp from Stainmore along to Cross Fell and North-West to the edge of the Caldbeck Fells. Inspecting the view would take up a fair amount of the time available.

Sunrise #1 was spoiled by the sudden appearance of a huge black cloud and some drizzle, so I snuggled back to sleep.

Sunrise #2 was just a hint of orange, so I snuggled….

Lucky spent the bulk of morning#1 asleep under my down gilet and most of the rest of the day stretched out in the sun. We did have a little walk up the 50 metre climb to Green Bell summit and along to Randygill Top and back – joined by Dawn. It was a brief interval of brutality, though, on a day mainly taken up by reading, drinking tea and drifting off into dreamy-sleepy-snoozy land where the only difficulties and frustrations involved the perenial struggle with Kylie’s ever-difficult bra strap and that strange dream about living in a house with loads of water pouring in through holes in the roof.

I spent a large part of the afternoon watching a stonechat feed three  fledglings. Fascinating stuff watching the little-uns dip and “chat” and scutter around after Mum who kept up a supply of bugs (I assume) all afternoon. It seems they have their favourite rocks and stones to perch on. Its a long long day in midsummer for a little bird.

Morning #2 was equally action-packed and we eventually dragged ourselves away late morning back to Ravenstonedale for a chat with a farmer clipping his ewes and the quick bagging of Little Asby Scar, an easy stroll from the road to a delightful limestone pavement with a huge view of everything.

I reckon we did nine miles altogether. Far too much. Far, far too much.

We (Me, LTD and The Bro) were supposed to be having a little trundle around Coniston Old Man and Wetherlam and, in the process, bagging a couple of very very obscure Synge Tops and a wee Tump called The Bell. But the Met Office/BBC weather forecast consistently produced dire warnings about torrential showers and thundery thunderstorms with localised flooding (important, this...) over the very fells wot we were intending to do.
So we didn't. Instead, we headed for a triumvirate of diminutives not towering over Sedbergh at all, but lurking quite close by (to Sedbergh).
And, parking neatly in a very small layby on the A whatever-it-is,  we headed off through a sheep-pasture for the first top - one brackeny and tussocky Kirkbank, a hill, I suspect, where almost nobody goes unless they're after obscure Cumbrian Tumps. This is a bit of a shame, really, because it has a fine view of the Howgill Fells. The day was warm and fairly bright and it seemed unlikely that the Met Office's dire prognostications would actually happen. And since we'd abandoned the higher and more prettier and altogether more betterer fells of Coniston for these nests of horseflies and deep grass, it seemed a shame. I came to hope that it would rain. Heavily. But not yet.
﻿
We headed off in completely the wrong direction for our next target - the 305 metre Tump of Knotts. This was deliberate and was really just to make the walk a bit longer.Instead, we wandered off South-West to Greenholme and then on a pleasant path North to Shakla Bank where there were flowering haymeadows which was all very nice.
More haymeadows and cow pastures, complete with the bovine version of  teenagers, we came to a path traversing the hillside parallel to the Howgill Fells. This produced some surprisingly cracking views of the Howgills (see the video below!) (This was take 2, take 1 being spoilt by some off-screen swearing because I couldn't find how to stop the recording, a short sequence of some boots and paws and a plastic sandwich bag obscuring the screen. You don't really want to see Take 1.
And so, up to the many tops of Knotts and a long  and ultimately successful search for Fox's Pulpit. It seems that this very hillside was , on 13 June 1652, the place where George Fox preached for three hours to 1000 people, an incident which lead directly to the founding of the Society Of Friends (aka Quakers). There's also a small and simple burial ground close by containing a few very old graves and, probably, just the sort of place that a Pieman might rest his ashes should the Quakers ever allow such a thing to happen to a soul-doomed pagan. Was it a coincidence that the date was also 13 June... albeit 364 years later?  Probably.
Onwards and upwards and, by missing a path and leaping gracefully over a drystone wall, we achieved top number three - Firbank Fell 324 metres, with it's commanding view of the M6 motorway. It was with some delight that we noticed that , to the South, Kirkby Lonsdale seemed to be getting a bit of a pasting from a localised storm but that the dark clouds seemed to be closing in on us from the South and from the North. A few spots of light rain made us walk a bit faster, Southwards, over the rough moor back towards our little layby.
In the last few hundred yards, the skies opened and we finally got wet. It was too short a distance to put the waterproofs on. So we got wet.
Yay!
There's a map. Its quite a nice walk, actually, through meadows and little woods and over moors and stuff and with really nice views all around. And cheap, too, at just 7 of the Queen's miles. 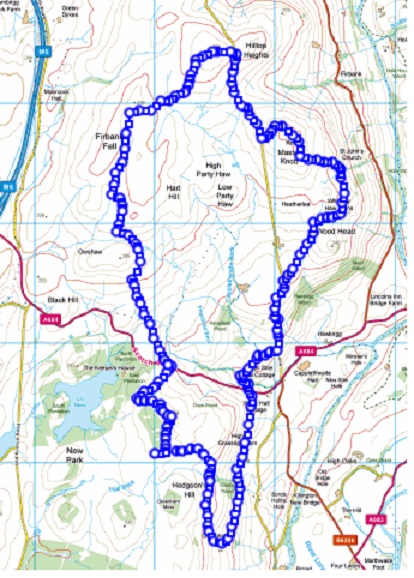 
This may be my final pontification on the subject of England’s highest pub crawl – unless and until we fill in the gap between Todmorden and Skipton.

I have lots of photies and it would be a shame not to show some of them to give peeps some idea of the walk and, hopefully, maybe an idea will insinuate itself into the occasional braincell that this jaunt is a jaunt worth jaunting.

I meantersay, there’s beer involved. Lots of beer. Potentially – much of it really nice..  And lots of walking too..

If anybody wants route details with extra options for variations (as if you couldn't make these up yourselves!) you know where I am - email address in my profile...

Anyway, I hope you enjoy the pictures. Click on a picture to make it bigger