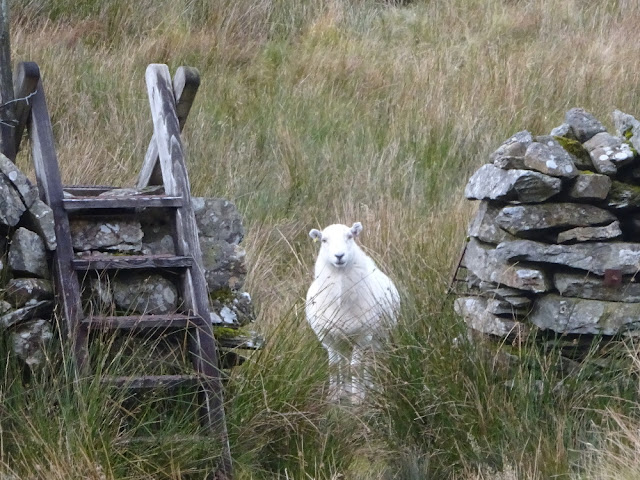 Last October me and Mrs Pieman had a holiday in the Preselli Hill and very nice it was too. The October before we were also in mid Wales in October and it rained and rained and rained. And it went dark. So, this year we booked to go to Wales a bit earlier and we booked in January - a bit before Covid 19 began. We booked for the end of September. In the intervening months, Covid 19 died back a bit. But then, at the end of August it started coming back. In September, bits of South Wales , Lancashire, West Yorkshire and North East England saw increasing cases and some "restrictions" were put in place. Advice, though, said we could go on holiday. So we went. 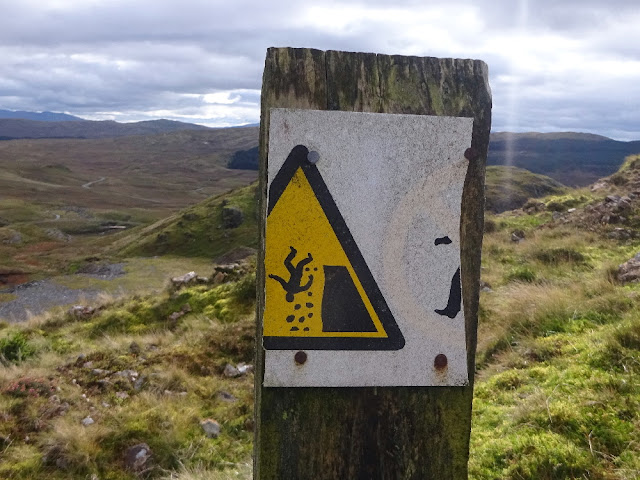 One of the  things on the Things To Do list was to bag just three Nutalls that had previously escaped my attentions. This would bring my Nutall-bagging total to just one short of all the Nutalls In The World, the final one being Pillar Rock, which could well prove a bit of an issue at my age and with my knees. Or even without my knees, but certainly with my lack of desire to fall off anything very rocky. One of these Nutalls was was Ysyfell Wen Far North Top. I had been within a shoelace of it on 17 October 2008 when I was on the very nearby Ysgafell Wen North Top - just a bit North of Ysgafell Wen, in fact. But I'd missed it and gone off towards Cnicht or something. And so with rain looming on the weather forecast and the Welsh Government forming plans to ethnically cleans North Wales of all nymphs and faeries, I set off in bright sunshine from a cottage in Tanygrisiau to bag the very top of the Far North Top of Ysgafell Wen. LTD was in high spirits, and so was I. 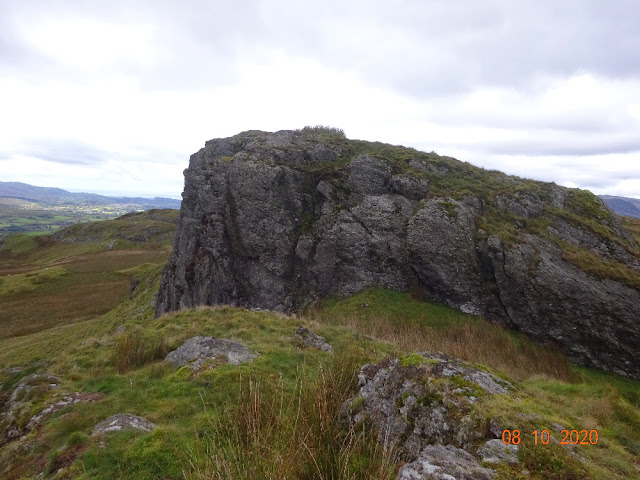 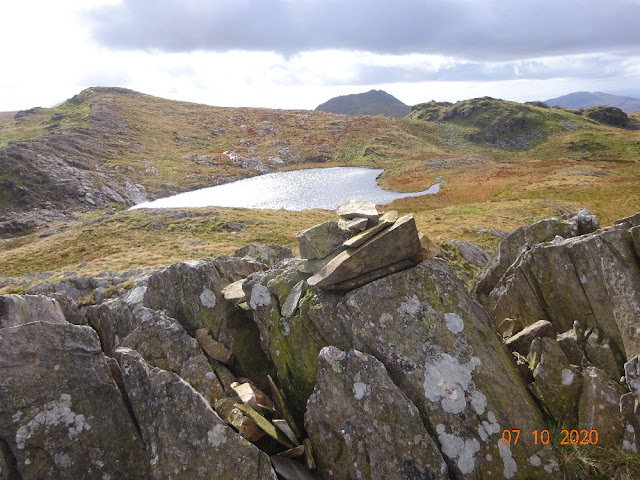 Our way lie via CwmOrthin with it's slate mines, Allt Fawr and Moel Druman, where we stopped for a long while to chap to a chap taking photographs, but who's knowledge of the area seemed limited to Moel Druman and a few local tops, Nice chap, though and we were joined by three lasses from Caernarfon who pronounced the hill names and Tanygrisiau properly and we all stomped off individually  to the summit of Ysgafell Wen, a lovely top with spiky bits. And then, I went to Ysgafell Wen North Top, which was the very next top.... except, it wasn't. Then I went to Ysgafell Wen  Far North Top, except I didn't, I went to the North Top, which I thought was... er.... look, I'm not Bear Ghrylls. Sometimes I get things wrong. I congratulated myself anyway and LTD celebrated with two gravy bones that I'd saved for him specially for the occasion. 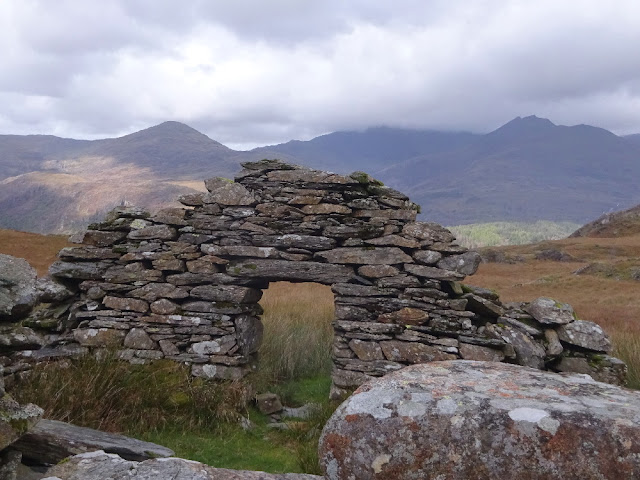 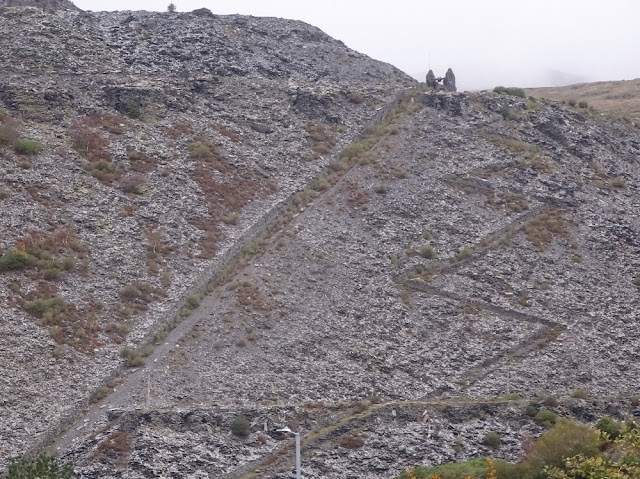 And so, we wandered off smugly into a rather nice wild bit, bagged the diminutive but craggy and with a big drop down the far side (not the Far North Side) Craig Llyn-llagi, just by the lovely tarn Llyn yr Adar, and made our way back to Tanygrisiau for plonk and scoff and a ticking frenzy on the wife's laptop. (This is not a euphemism by the way) And then, as the ticking progressed, the penny dropped. I hadn't bagged Ysgafell Wen Far North Top at all. There's an extra top up there. I'd counted three and there were four. Bugger. I would go back. 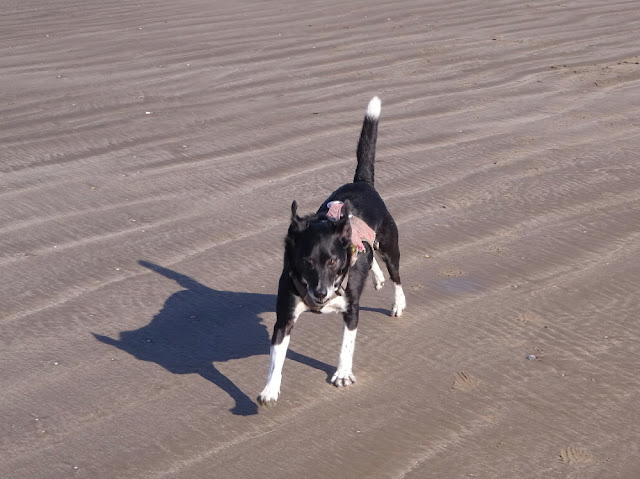 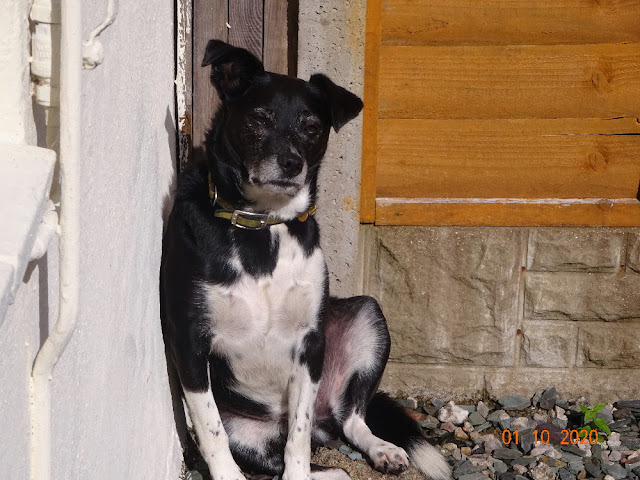 In the meantime, the Welsh Government closed the border with Conwy on pain of £100 for going anywhere near and it rained as predicted. Two days later and with Another Plan, me and LTD went to Dolwyddelan in order to sneak up on Ysgafell Wen Far North Top from round the back, thus not repeating the previous route and also bagging three other tops on a little round.  This went well for a while. I had lazed in bed a bit late, though and just past Coed Mawr farm, we encountered suckler cows with calves. LTD has a nasty habit of barking at cows, and sucklers notoriously don't like dogs and can get quite aggressive. so we used up some time to sneak around various rocky tors and tussocks  out of sight of the cattle and continued on soggy paths to Bwlch Rheidad - a bwlch being the same sort of thing as a bealach in Scotland, a Hawse or Hause in Cumbria and a Pass up the Khyber (not a euphemism either by the way). Things got rougher along the very soggy ridge to Cerrig Cochion and the stupidly steep heather and rock of Meirch ( another very nice hill) and then, on towards Ysgafell Wen Far North Top. 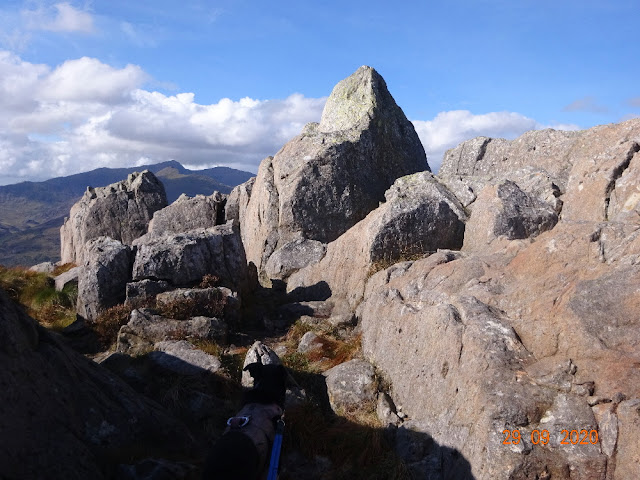 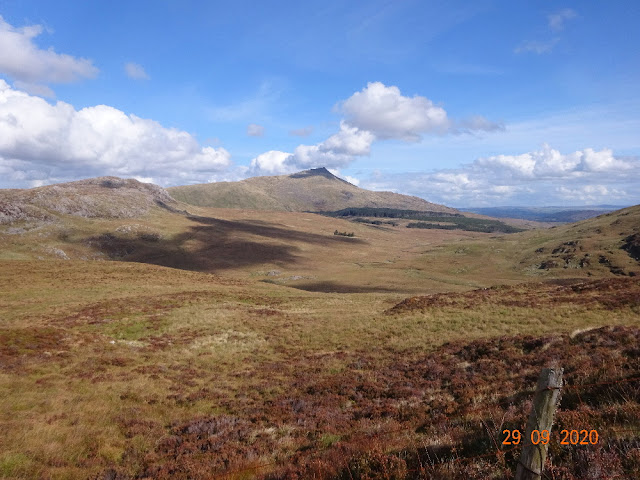 Except, my GPS said it would take me 40 minutes to get there at this speed, and forty minutes to get back and a few hours to get back to my car. It would be dark. The spirits of the mountains would emerge and rob me of my roasted cashew nuts (no euphemism here). I would be doomed to wander the tussocks for ever, looking in vain for my little dog , who would have run off as soon as he had discovered that he'd eaten all of the gravy bone supply. I had to abandon the surge towards Ysgafell Wen Far North Top. Bugger again. Instead, we wandered over Yr Arddu and down through the woods to Roman Bridge where the romans had built a bridge to take the train line over a small beck on it's way to Blaenau Ffestiniog, the wettest town in Wales in 121 AD. Flushed by this success, they thought about having a wall between Northumberland and Roxburgh and the Scots would pay for it. 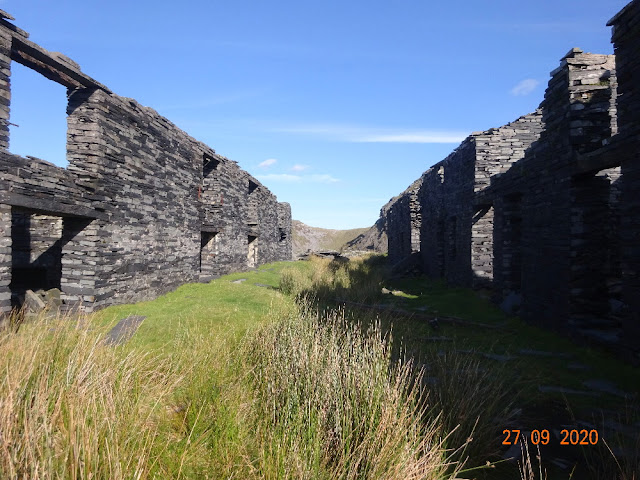 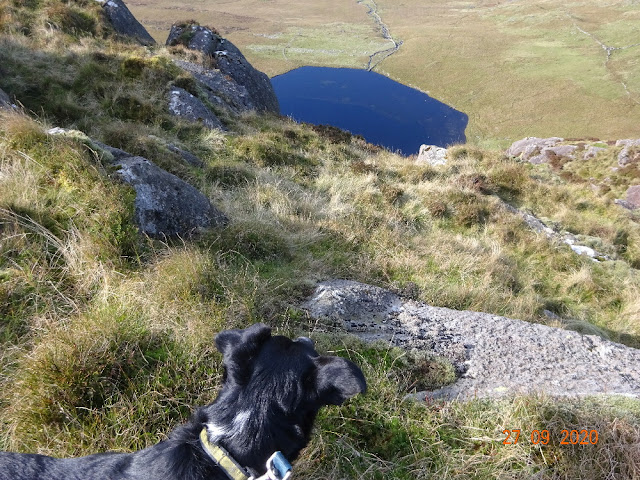 The it rained just the once. And during these five or six days we did a bit of tourist stuff. LTD had a run on the beach and various small Tumps around Blaenau were bagged damply. And during this time, Plan C was formed. This involved driving to Blaen Nanmor (for some reason, the OS have missed the "T" out of this place name - maybe it should be Blaen Nantmor??) where, on a narrow single-track road there was a car park giving access to a short path of just a couple and a half of the Queen's Kilometres, the very summit of Ysgafell Wen Far North Top could be acquired for the List of Hills Wot I Bagged. Except I got a mile or two up this road and came across a sign. It said "Road Closed" I turned the knipemobile around with some difficulty and proceeded grumpily back towards the main road. Maybe it was a sign (Course it was a sign - it was a big yellow metal sign in Welsh and English) But a stop in a layby showed that I could park at the foot of the Watkin Path that goes up Snowdon and  go from there, adding just a couple of kilometres to the route. If there was space, and it was getting late, so Snowdoneers might have packed the place, a Plan D would be Just The Thing. 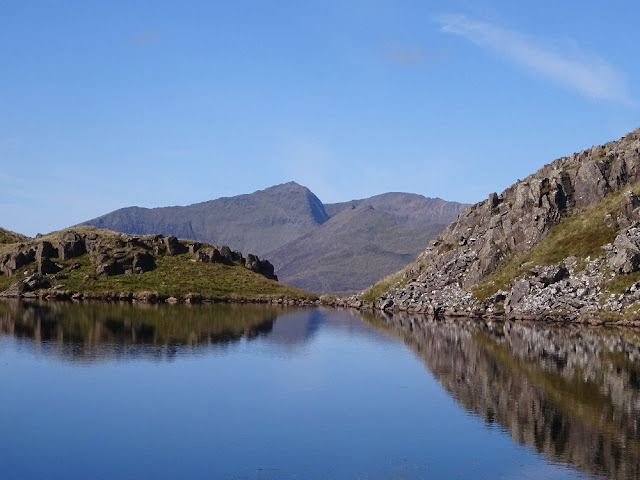 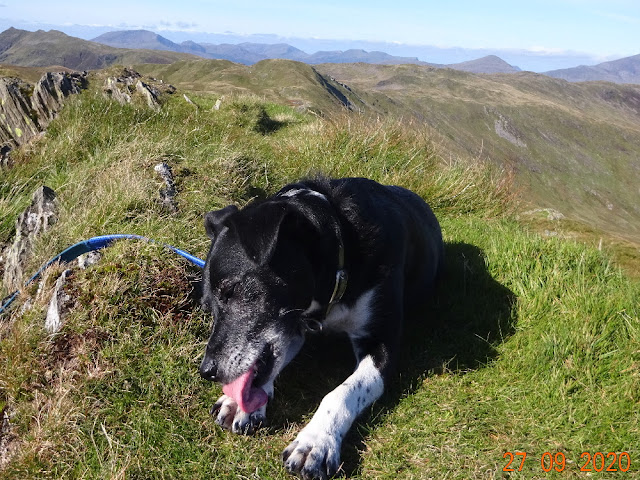 And it worked, although I did find myself on the top of Ysgafell Wen North Top again, congratulated myself again, gave lTD another gravy bone in celebration and then realised that Ysgafell Wen Far North Top was, in fact ....over there------------->  So I went over there and climbed to the top. LTD had another gravy bone and I resolved not to tell anybody about how hard this hill had been to climb. So we went home via an off-licence in Penrhyndeudraeth. disturbing a buzzard "tidying-up" a dead sheep for the second time. I did detect a certain element of surliness about his demeanor. Incidentally, at 4:00 pm, on returning to the car park at the foot of the Watkin Path up Snowdon (remember that one?) two well- wrapped up but otherwise very badly equipped walkers were seen to be setting off to climb Snowdon. At about five o'clock, it started raining again, the cloud had already been swathing the high tops. I wonder if they got away with it, and decided, instead to go to the pub. Or are they still up there? 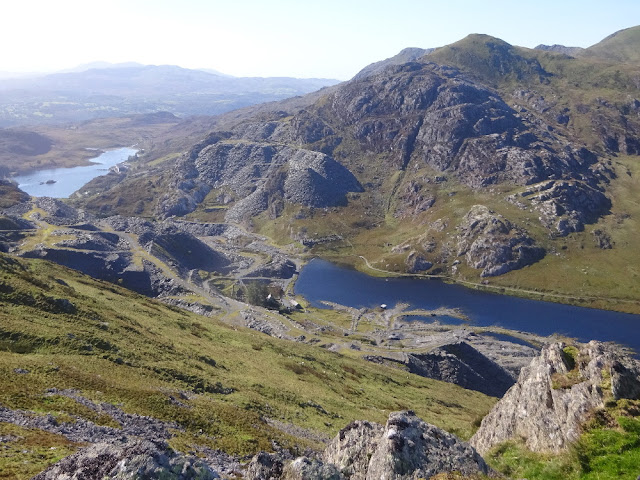 In the meantime, and in-between various bouts of wet and windy weather, the WElsh Government had been railing at having written to Boris Johnson about keeping saxons off their land, and being ignored by said Boris and were thinking about closing the border and declaring war on East Anglia, but having no actual tanks, decided that it would have been too dry for them anyway.

So, finally we decided on an easier bagging task - a group of five lovely and bijoux tops not too far from the forbidden land that was Conwy. These were just off the road and consisted of various lovely, rocky tops including Craig y Garreg-lwyd and it's North Tope (doesn't seem to have a Far North Top, although it does have a bit of a "stopper" crag on the way which requires a short diversion - the excellent Y Garnedd and the steep and craggy pudding Garreg-y Fol-Gron, and, finally , just across the road, and defended by very soggy moorland and a little crag, Cerrig y Leirch. So, just two Welsh Nutalls to go.  I might never make it.

Incidentally, the pics in this post aren't in the order that they're supposed to be and bear no relation at all to the text, apart from the fatc that they were all taken on this trip. Blogger just won't let me move them - if I try, they just disappear... poof! Gone! Nobody knows where...... 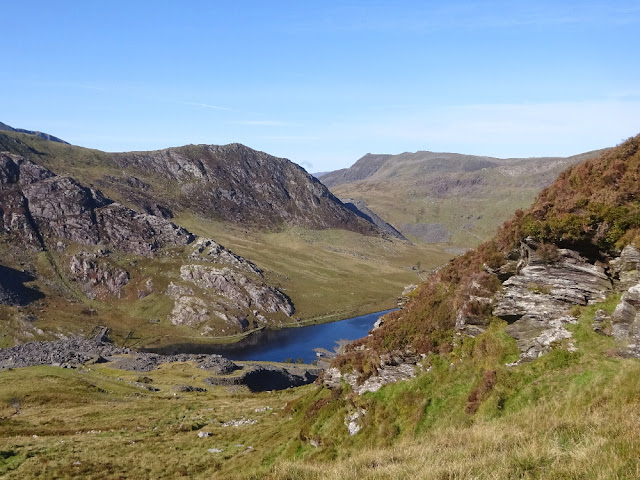