One of the things that happens (in normal times when there's no pandemic restrictions) is the TGO challenge "gatherings". There's two of these, one in Newtonmore and one in Derbyshire. This year the English Gathering organiser, Alan, organised a "do" at the Sportsman's Arms in Hayfield. This was good for me and LTD for several reasons:
Hayfield is a good place for walking.
The Sportsman's Arms and the Kinder Lodge, where me and LTD stayed are both doggy friendly
and
Chrissie and Geoff live in Hayfield and said I could stay for the bagging of Robin Hood's Picking Rods, a place that has sneakily avoided my attentions for several years now for lots of different reasons, mainly, pandemics and Derbyshire County Council's enthusiasm for closing the Snake Pass.

So, the Gathering, for me, is part of the TGO challenge "thing", as is having a walk with Chrissie and Geoff and their doggies (although LTD is a grumpy bugger and did cause the occasional noisy fracas with the otherwise placid and, even  cuddly, Pebbles and Islay. ) He's a pillock for that sort of thing, and, it's probably my fault. Hard to stop, though.
Anyway me and LTD turned up at the Kinder lodge in the Friday night, had dinner with a smattering of TGO-ers at the George Inn (also dog-friendly) and in the morning we (me and LTD)  went off to bag some hills just to the South of Buxton. The main victims of the knipey boots and paws being Parkhouse Hill and Chrome Hill aka The Dragons Back.

After bagging the first two tops, and being unable to identify a permissive path to Chrome Hill,we found ourselves at the foot of Parkhouse Hill.  Parkhouse Hill has a bit of a reputation for scaring people ..... and their dogs.... and, from the bottom, I was quite doubtful of setting off. Lots of people were coming down the narrow ridge and some were having little "adventures". But nobody fell off and I decided just to go up an bit and have a look.

It does look very big and spiky and scary, but, in fact, it's quite small and , quite quickly, I found myself in the company of three herbally scented individuals and their little dog and, noticeably, one empty bottle, an almost finished bottle and another spare back-up supply of strong liquor. They were in a happy mood and were trying to consider how they would get back down. They may still be there, who knows?


Having got up, we went back down, partly aux-gluteous maximus, and went off to climb Chrome Hill. This was much more civilised and friendly and the permissive path was obvious. So we went back to Hayfield. The do at the Sportsmans's Arms was grand and friendly and the food was good and LTD slept under the table and was  restored to conciousness by being fed quite a lot of chicken by a man from Burnley 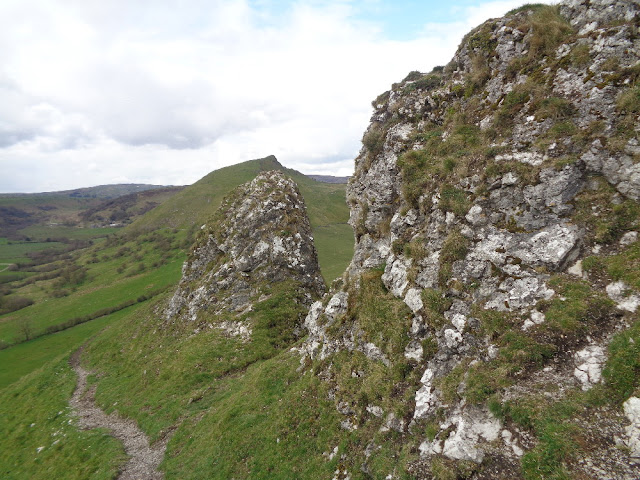 And in the morning we went to Geoff and Chrissie's and went off to finally bag Robin Hood's Picking Rods, and, in-between doggy-based skirmishes, we had a cracking walk in a chilly wind, breezing in from somewhere the other side of Manchester. Thanks to Geoff and Chrissie for looking after me and feeding me with Geoff's pasties (not a euphamism) and for breakfast and several brews. And so, me and LTD went home.
In other TGO news, I have laminated extracts from seven 1:50k OS maps, saving just half a kilogramme and next week I have a final TGO chally shake-down in Galloway, or South Ayrshire. I was going to go to Llangollen, but this would involve the trans-Pennine express/Northern rail and , frankly, their record of actually having a train turn up at all has been poor. They're blaming covid for a lack of drivers, but they failed to turn up several years ago when I went to the Dales for a pre-TGO shakedown, resulting in missed connections and a late arrival in Clapham. So I have more confidence in arriving at a destination by using the knipemobile. So that's what I'm doing. I have the maps. I have the dog. I'm going to Galloway. (hopefully!)
After this I'll do a food plan. This ought to be better than my Howgills food plan where I ran out of food. The upside of this was some very nice bacon from Sedbergh market.