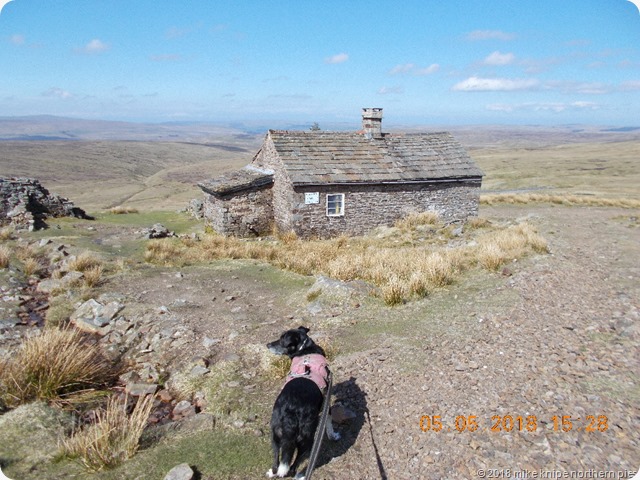 Although I missed the training target for walkies with contours, I did manage this walk, on a warm and windy Saturday. The idea was to walk 20 miles and I chose to do this route wot I’d done a couple of times before because I knew it was 20 miles. Simples, innit?

The route starts at Garrigill, follows the South Tyne Trail alongside the River South Tyne, heads up through the Moorhouse and Upper Teesdale NNR by Troutbeck to Dun Fell Hush, crosses Great and Little Dun Fells and Cross Fell, down to Greg’s Hut and along the fairly dull return to Garrigill following the Pennine Way. 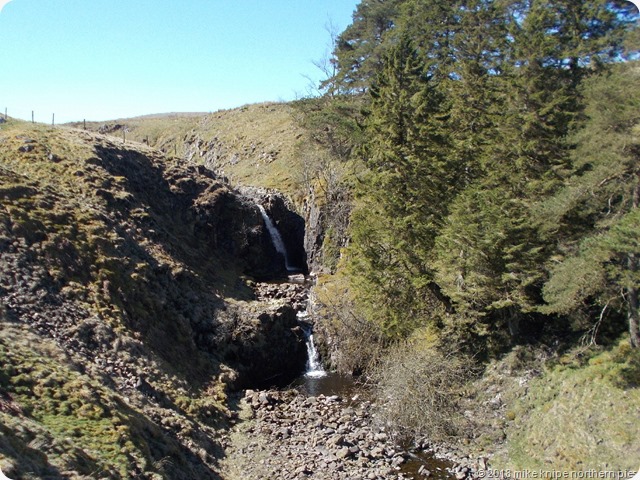 This gives a walk of 20 miles with 3100 feet of ascent on mainly very easy walking, which is coming quite close to my hardest days on the planned TGO chally route – a bit longer than any of the days, but with about 500 feet less of ascent. This has given me a bit of confidence.

And, having established that a kilt will be a main part of my kit, there’s a effect on the weight of the spare clothing I’ll have to carry, partly enhanced by a very lightweight RAB wind-shirt which will replace a heavier RAB anoraky-type jacket and a merino buff/hood for headwear. So, I’m losing a coulple of KG’s here.

Speaking of losing Kg’s , having implemented some long-disused elements of willpower and using my long-standing obsession with measuring things and drawing graphs with the data, ( this helps with inspiration) I’ve managed to be starting the 2018 TGO challenge about 10kg lighter than when I started the 2017 TGO challenge. Losing any weight on the actual walk may well result in me disappearing altogether…. The upshot is that I’m finding walking on the hills much easier than this time last year, so providing I don’t get asaulted by a stag, or poison myself with Bad Cooking Strategies, I’m fairly hopeful of a good result. (Nothing is absolutely certain when it comes to the TGO, other than getting the mind relaxed into the need to Chuck Away the Wristwatch, Just Keep Going and Never Pass A Tearoom it is, in fact (almost) All In The Mind. We shall soon see, anyway.

Poeple and Things  met on the walk across Cross Fell: 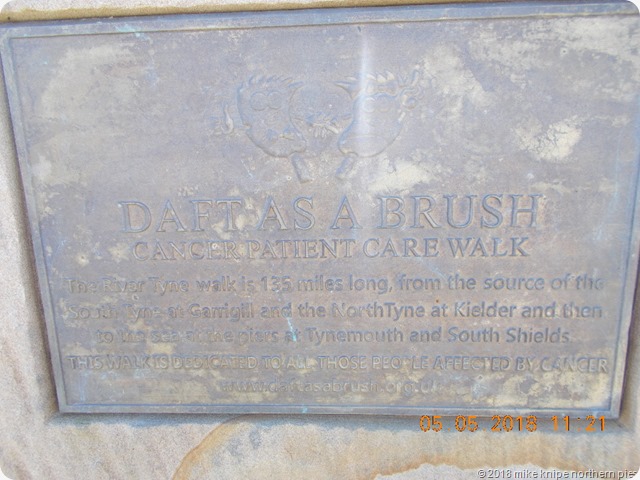 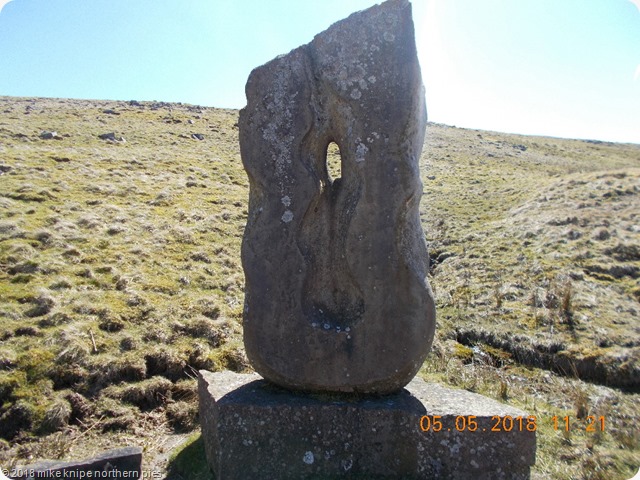 A lass on a bike with two black dogs

A keeper who thanked me for having the dog on a lead. 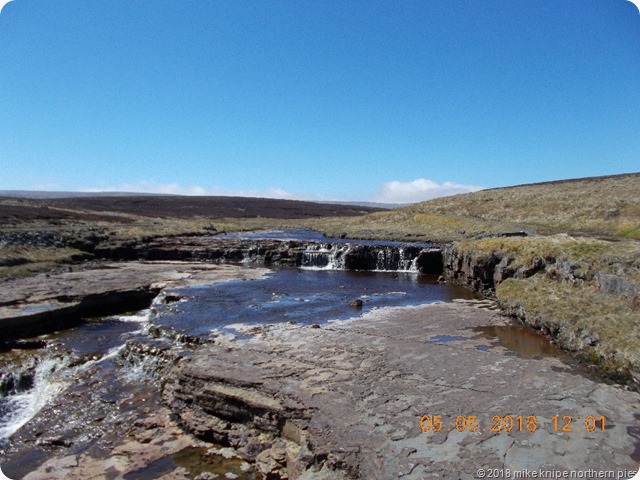 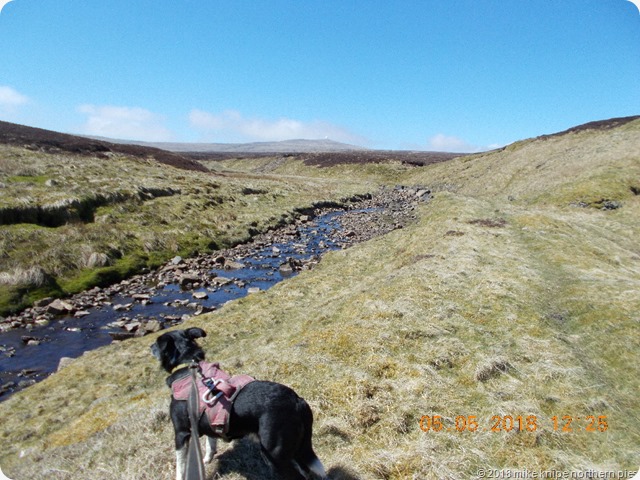 Nobody for hours and hours…… whilst climbing up by Troutbeck

Lots of walkers on the Pennine Way. LTD licked a stranger’s legs on the summit of Cross Fell (I would get into serious trouble for this kind of thing but he seems to be able to get away with it) – He was rewarded by the woman’s hubby donating the remains of his tuna butty. 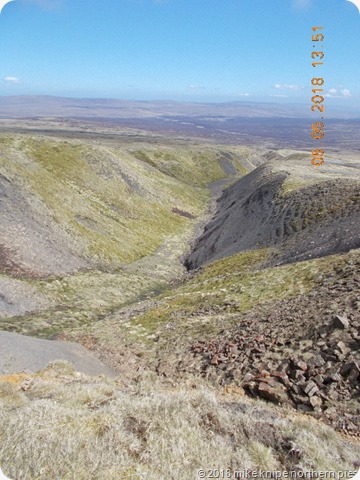 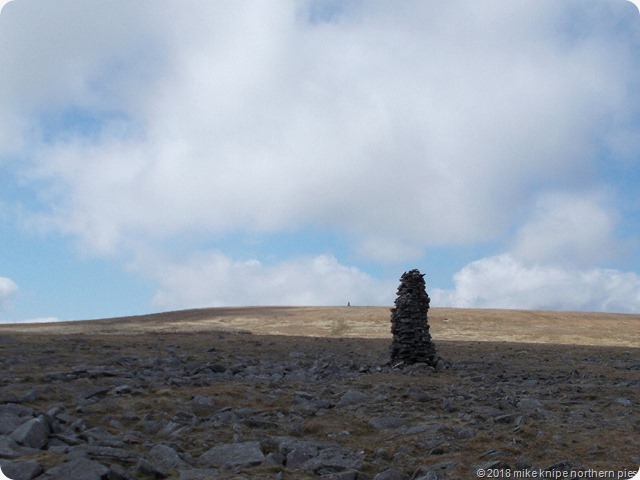 A bottle of Budweiser in Greg’s Hut. Ta for this. It was very nice. I sat outside and admired the view.

Little patches of snow on the North side of Cross Fell – LTD ate some. 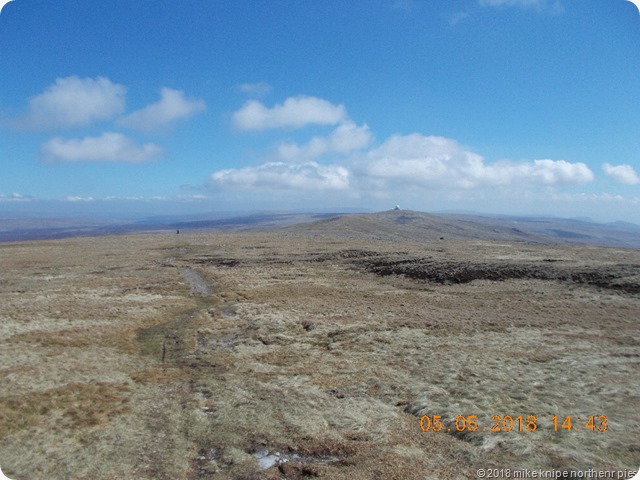 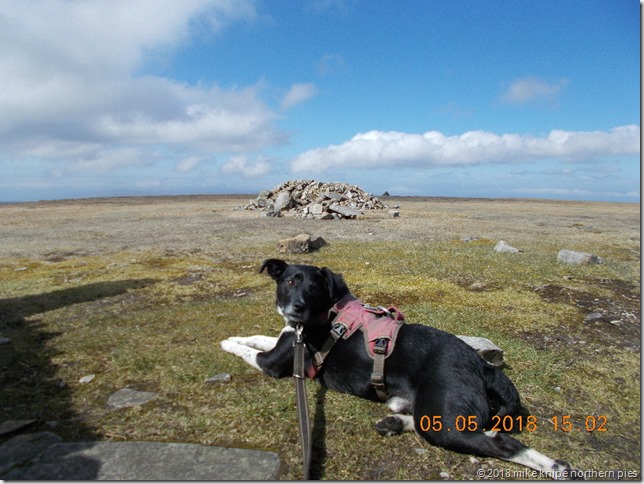 Piles of grouse-shooting equipment beside the Pennine Way, and every small beck or syke holding a trap on a log. New roads…. vehicles……plastic paths so the shooters don’t get mucky boots – general industrialisation for the fun of walking about dressed as Edwardian gentlemen shooting at flocks of grouse and/or anything else that moves. 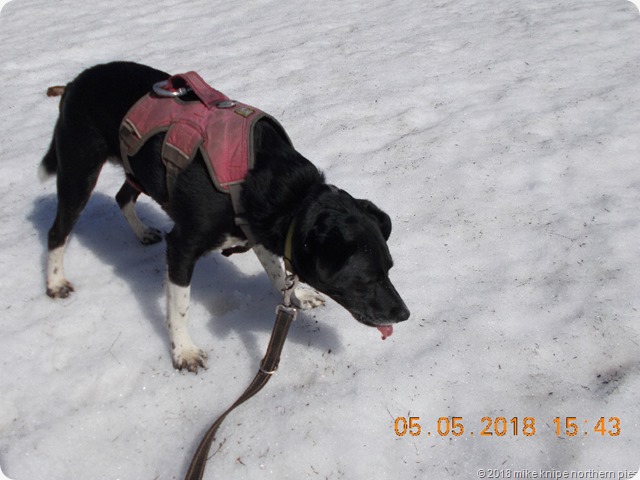 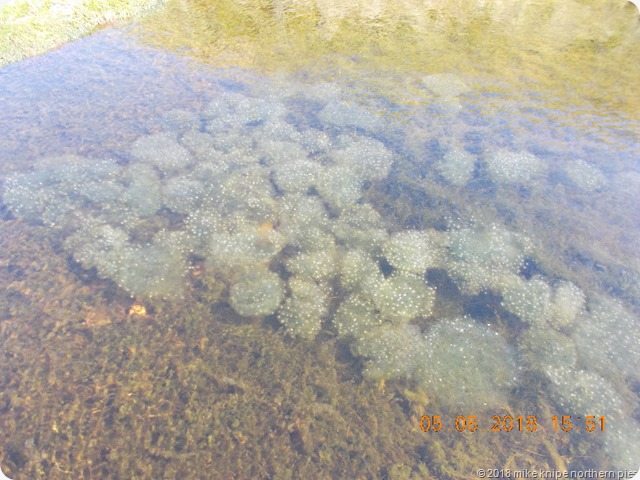 Frog-spawn in the pools in the sinkholes.

A woman waiting for friends, late from their walk from Dufton to Garrigill. I suggested that they could be another hour so so, given the distance involved. 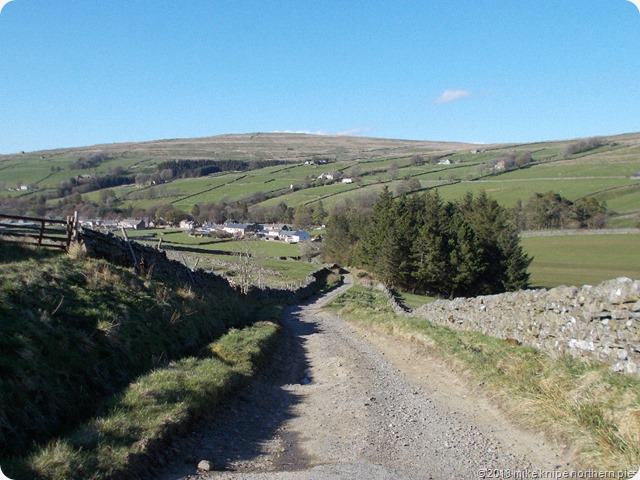 And I felt fine at the end of it all – I could have walked much further, I think. So, that’s a good sign. The conditions were excellent, though – warm and sunny but with a bit of a headwind going up by Troutbeck. (Lots of cracking camping spots up there by the way)

There will be no more walkies for me till next Friday, when I start the TGO (there will be doggy walks but you don’t want to know about the intricacies of poo bags, LTD’s friends and enemies or why we keep doing the same routes….

In three or four weeks time, blog readers of this blog, and many others will be thoroughly sick of hearing about the TGO challenge and I’m thinking about that, but I can’t ingnore it. I may just look for Warples.

Lucky The Dog Does Buckden Pike 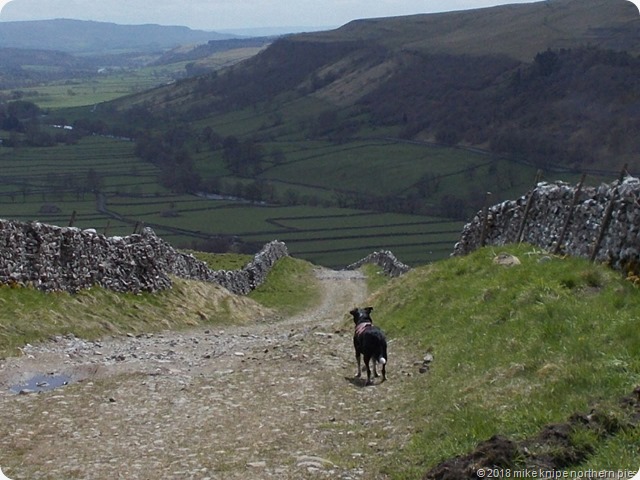 Plan A had been to go to the Lake District for it’s compacted contours but the weather forecast had thundery showers with hail and lightening. I have a certain distrust of lightening and LTD isn’t fond of thunder, so, we overslept and determined, from a detailed search of various databases, manual records, anecdotes and vague memories, that LTD had never been up Buckden Pike.
So, that’s where we went. 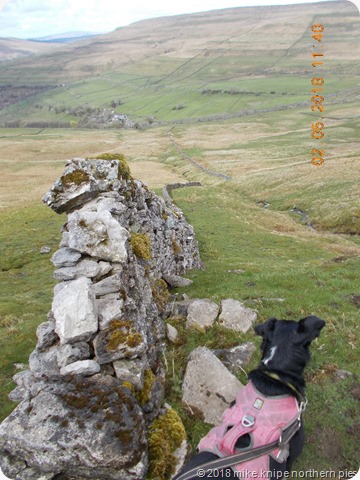 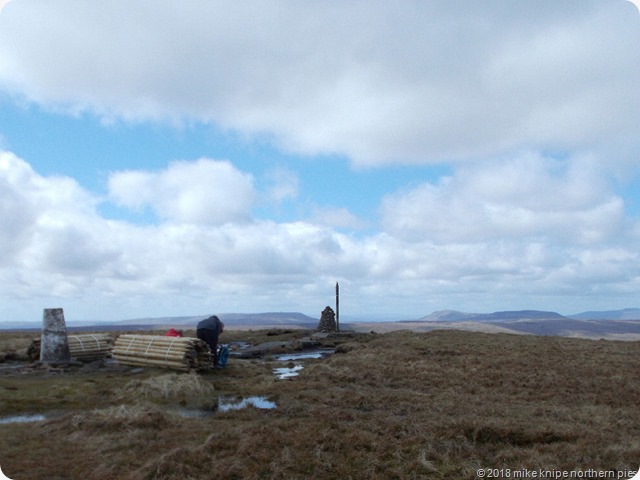 We went the long-way up – that is to say, the Roman Road also known as “The Rake”, the turn-off up to the pike, also known as “The Fork”, the squashy bit on the top aka “The Trowel” (yes, I know this doesn't quite work, and I’m open to suggestions to try to fit in a wheelbarrow and a spade)(which I always like to call a “spade”.)
The murky clouds of the morning cleared and it became sunny and quite draughty in a cool and breezy kind of way. 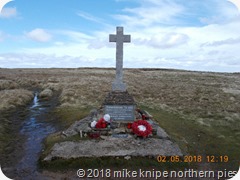 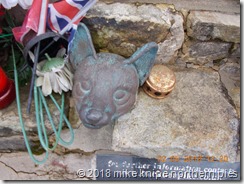 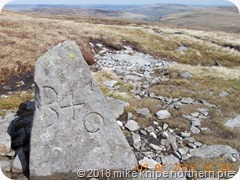 Buckden Pike summit was occupied by just two “senior” ramblers – senior meaning anybody older than me, so it’s a small but bijoux cohort. It was far too chilly here to consider sitting around damaging a chicken and tomato butty, so we progressed, quite quickly, past the WW2 Polish Air-accident memorial to a turn in the wall which provided shelter from the nither, a period of warm sunshine and a nice view. It was here that the chicken and tomato and mustard butty and a banana all came to grief. Nom nom.
Our two senior ramblers rambled past, followed by a semi-retired NHS worker from Lancaster, who was off to bag Great Whernside. 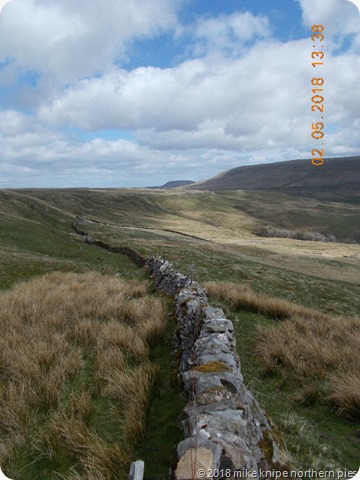 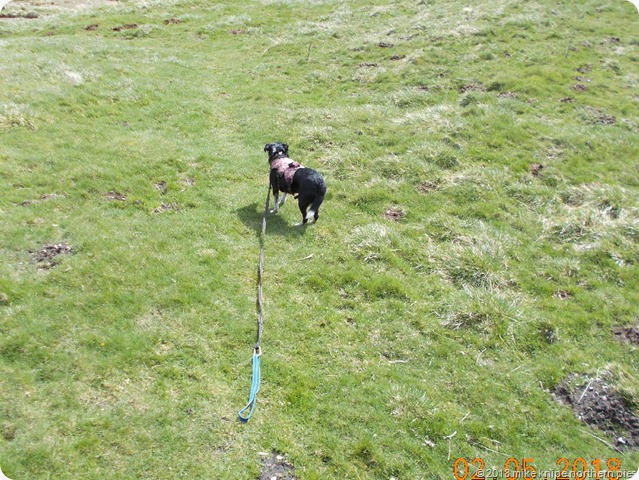 I caught her up a short time later as she tangled with the sloppy bogs created by some eco-dams and last night’s heavy rains. This provided many navigational problems and there was severe danger of wet socks. But we managed. She went off to Great Whernside and me and LTD descended to the Bluebell Hotel in Kettlewell for a shandy. Note for dog-owners – the Bluebell is very dog-friendly. Just sayin’.
To finish, we followed the Dales Way back to Buckden where the knipemobile was still parked. 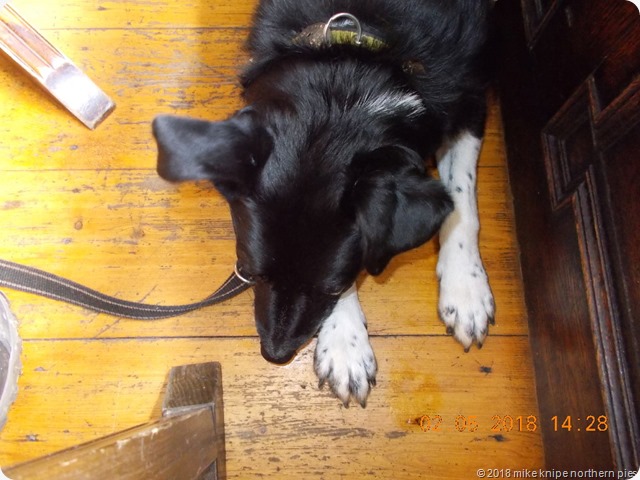 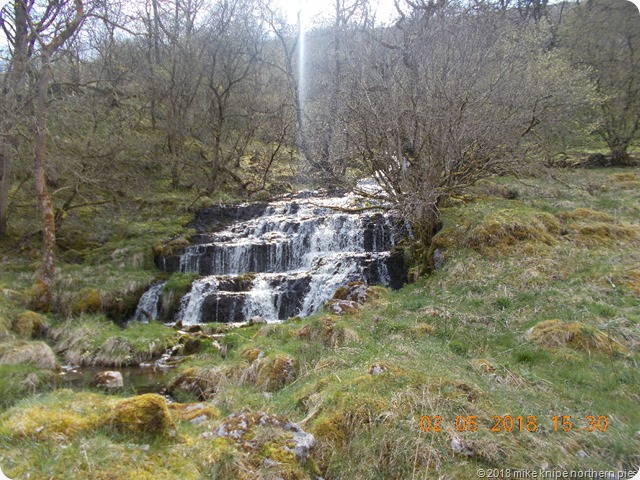 We did 12 miles and about 2000 feet of ascent, which, really, for the purposes of TGO training was just not enough. The TGO challenge starts next week, and, whilst I’m getting progressively skinnier and a bit more racing-snakeish, I’m not specially confident about sticking to my planned route, which is fairly hard in places. However, I’m a right sneaky bugger when it comes to implementing routes and there are other options available if required. Or if I just can’t be arsed at the time.
My route also coincides substantially with JJ’s – probably as far as Rannoch, or even Carie campsite. And, we both have kilts innit?
More walkies quite soon………