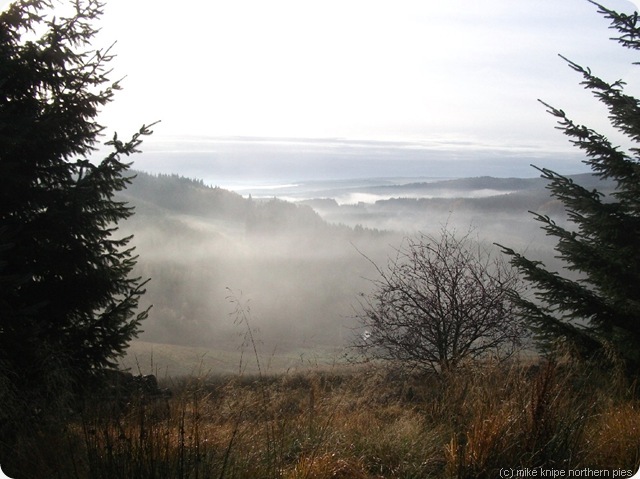 This is day 1 of a three day walk along the Scottish/English Border – the bit that I missed out on another occasion.
Some silly bugger had been playing with all the clocks, so I set off an hour late, or dead on time Greenwich Meantime. It was still dark, but I arrived in a deserted Kielder somewhere around dawn and abandoned the knipemobile. 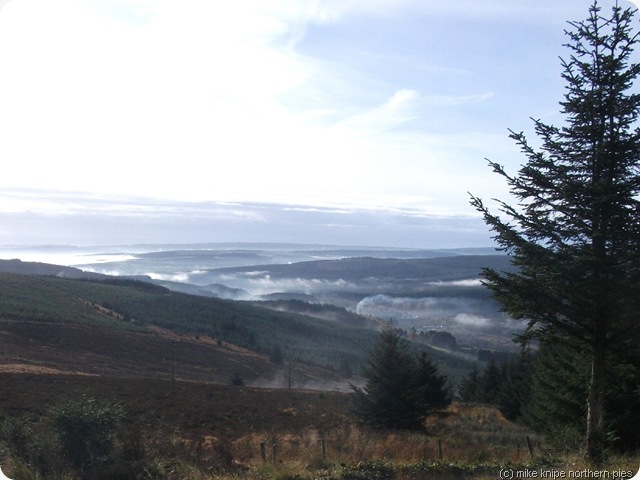 Forest tracks and a derelict road took me up to Deadwater Fell, upon the summit of which there are “things”. I’ve not much clue as to what they are, but they have CCTV cameras and notices about navigation aids. There’s also an architect-designed too-far-up-his-own arsehole-for-his-own-good shelter which lets the wind in and, through which, if you look through the cracks, you can imagine it’s just like looking through the gaps in the trees. Look, matey boy, architect person, this is Kielder Forest. It has hundreds of millions of trees. You don’t need to imagine what it’s like artistically. cos the real thing is , well, just everywhere. 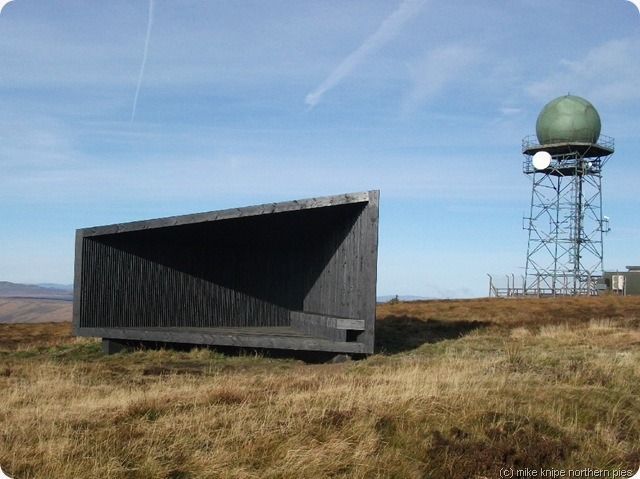 Deadwater fell is the only English top that sound’s like it’s been named by Cisco Kid by the way.  Eee-har, throw another injun on the fire, Jake….
A boggy path leads to The Riever’s Cross – an ancient cairn with a shelter fashioned in the middle and a small cross. More bogginess takes the already soggy rambler fairly easily to Peel Fell where there’s a little cairn. 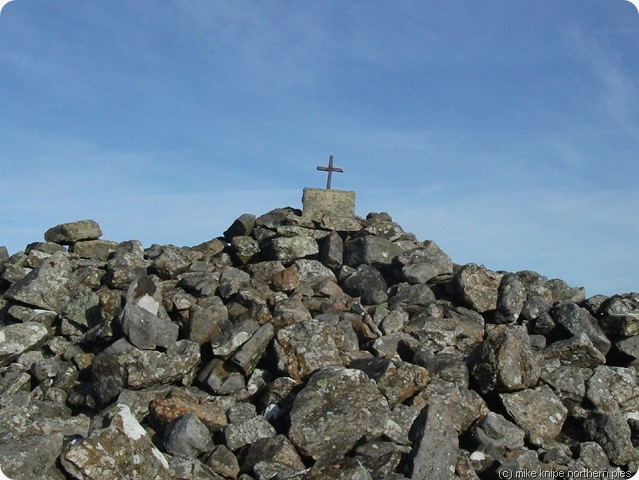 Just before the top , there’s the “Kielder Stane Spur”. This is a boggy path (I’m sure you’re getting the picture by now) which leads downhill to the Kielder Stone. The Kielder Stone is a point on the Border which, in less lawful times, people could rush up, leave a message and bugger off before anybody saw – and somebody else would do likewise form the other side and pick it up. So, it’s a significant point. 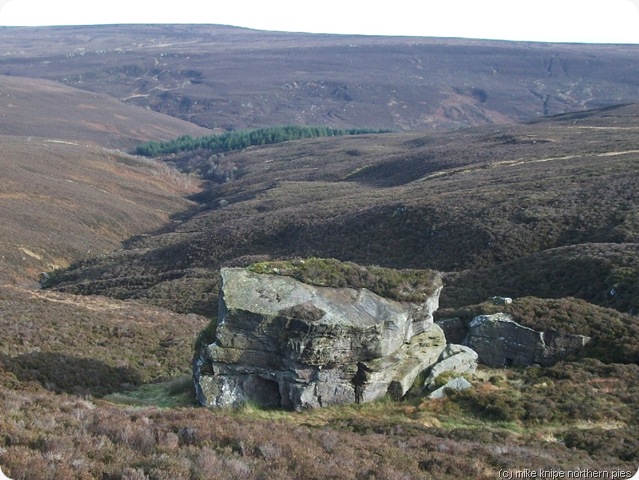 However (and this is a big however girls and guys) the ground around the Stone is probably the roughest anywhere for about a kilometre in any direction. Any movement is slow and ponderous and teeters between deep heather, badly spaced tussocks and sphagnum bogs. My advice , for those intent on the ridge, is to give it a miss. the walking higher up is much, much easier. The only problem, of course, is for the purist Border follower because the Border doesn’t follow the ridge at this point but ducks down to the Kielder stone and then messes about trying to find an excuse not to go back up to the ridge. A determined effort and some blasphemy brought me back to the ridge, and what a fine bit of walking this is. On the “Scottish” side of the fence, the grass is short and the views into Scotland are specially fine. There’s a few gritstone outcrops and a trig inside a shelter. This is Carlin Tooth, a fine hill which needs to be transferred to England. A carlin by the way could be a “pea” but it’s more likely to be a wife who has special “powers”, one of which may well be to turn herself into a hare or a crow. A tooth is a tooth is a tooth. 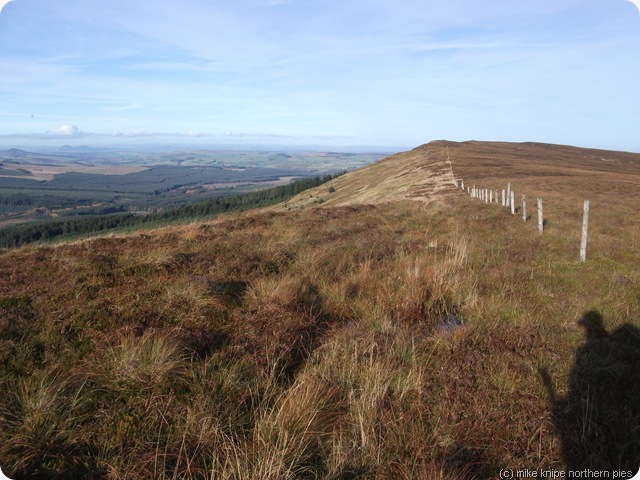 As the sun was yawning, winding up the clock, putting the cat out and getting ready for cocoa and bed, I thought I’d better put the tent up at this point. I found a heathery. sloping spot near to a very small stream of tea-coloured water. And there , I spent the next fifteen hours. You get a lot of rest, backpacking at this time of year. Except that it was halloween, of course and I’m on the witches hill. And it’s dark…. oooer…. its very dark…… 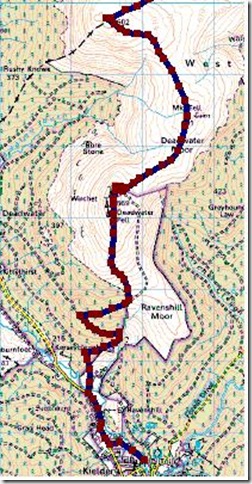 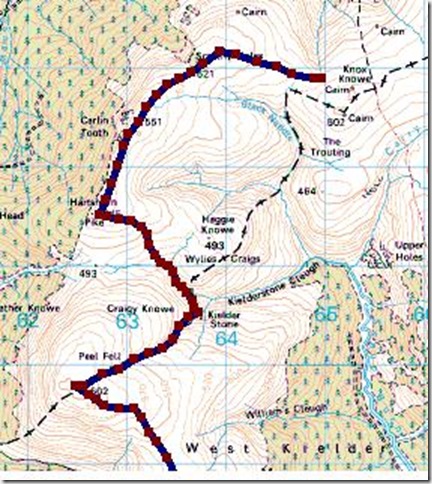 Love the whispy fog in the valleys pics.

It's a raydome. There'll be some radary thing inside. And I think the shelter is attempting to represent a hog horn (another radary thingy) but notwithstanding any gaps, and unless the wind only blows from behind, is clearly two sides short of anything useful.

What was on the English side of the fence?

It looked more like the speaker on my grannie's record player , Tony(phonograph)
On the English side (but still in Scotland) - was tussock grass and squelchy mucky wet stuff...
There's a Lancashire word for it - "Slutch".

Hi,
Re parking in Kielder for multi day excursions into the wilds-where do you park?Do you pay?Ive some capers in mind but as usual my biggest obstacle is where to dump the car.
Cheers.

According to my notes and the blog post I posted 3 or 4 blogposts later, I parked the car behind the Anglers Arms. I got into bother with Northumbria police for this who, having received a report that I'd abandoned my car and gone into the forest to top myself, began to arrange an investigation. I met a police lady at the car park and she told me to tell the cops if I ever did anything like this in future! I didn't pay, although all the local car parks now seem to require payment. I assume this has developed since I did the border walks. As the FC provide a few comedy wild camping spots (they're not very good) - I assume that they're OK with people leaving cars for a few nights and you might consult with the FC about multi-day parking. You could abandon your car in a layby or picnic place and provided you tell the police when you'll be back and the car details etc - there's such a place marked on the map at East Kielder, Some of the CPs marked on the map no longer exist, though. Another option is to park at Byrness where there's ample free parking