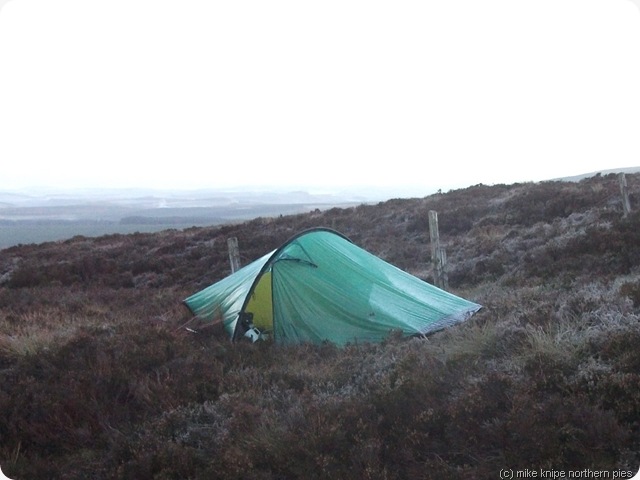 Dawn was a long time coming and the tent was frozen stiff when it did eventually arrived (apparently, it slept in becasue somebody had altered all the clocks…) so I was well motivated to get moving.
I followed the fence for a bit and guessed that a green flush running up through the heather was a bridleway/path which crosses the Border just a bit West of Carter Fell. Amazingly, this turned out to be correct and, where the path crosses the ridge there was a cairn and a boundary stone. 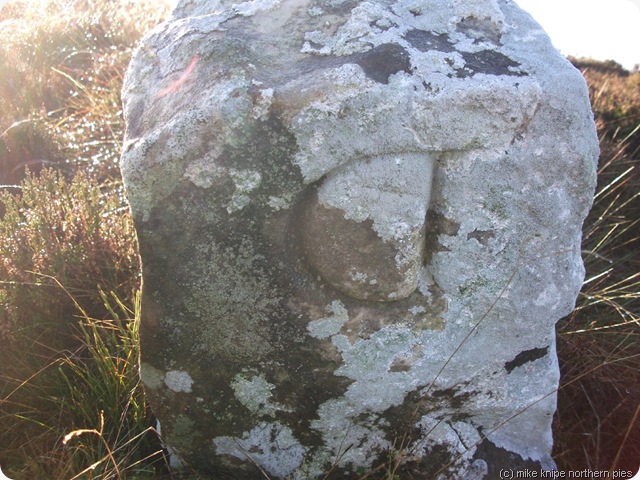 The boundary stones are the key to the next part. They’re not very big, though, but they have “N” on the English side (for the Duke of Northumberland’s estate) and a backwards “D” on the Scottish side for the Douglas estates. I have no idea why it’s backwards. It has been suggested that the stonemason was illiterate. It may be he was from Northumberland, though. Some of the stones have fallen over, but, often there’s a rotting stake to show where it is, and, if you look very very closely, there’s a lighter strip of grass running along the line of the Border and this contains a thin trod, just enough to make the walking relatively easy. 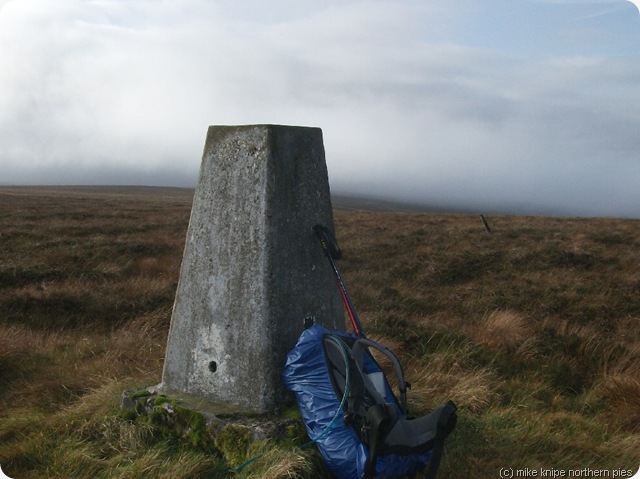 I climbed up onto Carter Fell in sunshine and met a fence. The fence shown on the map doesn’t follow the Border very accurately, but there’s a new one that does – so there are two fences. Either will take the Border rambler to the trig on Carter Fell. From around here, the vegetation is grassy rather than heathery and is much easier to walk on. It’s still a bit squishy, though. 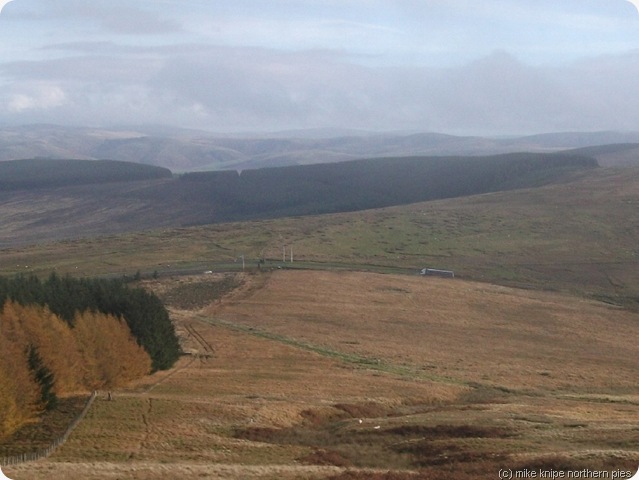 The tea van at Carter Bar wasn’t there, which is a shame because I was prepared to be exploited to the tune of a bacon roll and a mug of hot steaming – but it wasn’t to be.
A few motorists were shivering and having a quick fag at the Border crossing. There are Scottish flags there, but no English ones. 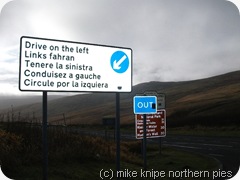 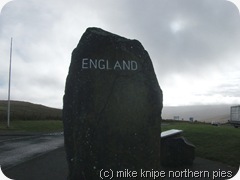 Miffed at the lack of grilled pig, I headed eastwards(ish) along the Border and nicked down into a little valley near leap Hill for a brew. There was a little spring of clean water, so I replaced the brown stuff in my platypus, removed the little shrimp thing that was swimming around and had coffee, squirty cheese and oatcakes and a Boost bar. 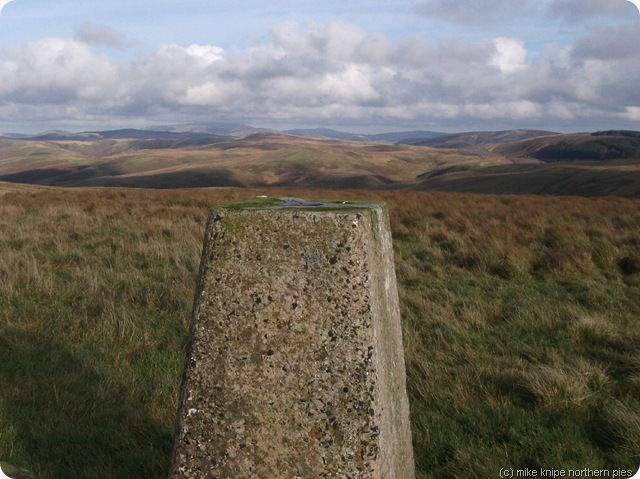 Leap Hill came and went, but the best top of the day was Hungry law – with a railway sleeper for a seat and a fine view of the Cheviot Hills to the East. 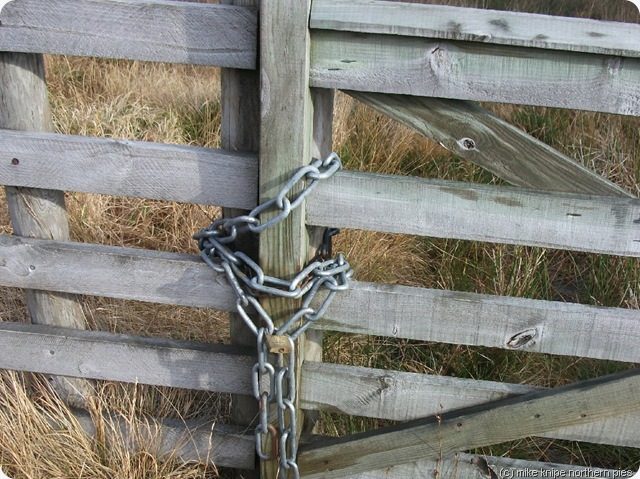 The bridleway down to Redesdale is another one of Northumberland’s Comedy Rights of Way. The path has mainly been planted over, some of it quite recently, and the gate into the forest has a heavy chain and a padlock on it. It’s supposed to be a bridleway. The challenge, I suppose , is to get your horse over the gate somehow. Further down, the bridleway is completely non-existent and traffic has to use the forestry road. Neither the Forestry Commission nor Northumbria County Council seem to have any interest in properly maintaining their paths. They’re really good if you have a mountain bike, but not for anybody else. They need sorting out, really, before the forest gets sold off. 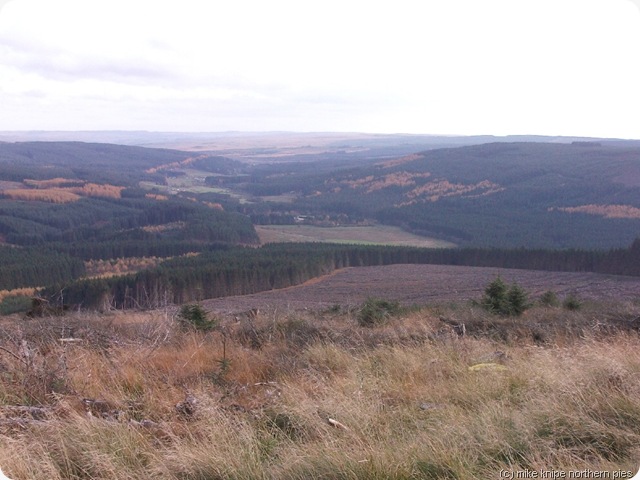 I turned up at Forest View hostel at Byreness a couple of hours early. Colin and Joyce did their usual welcoming job and I was watered (tea and beer) and fed (chicken curry) and had a warm bed whilst the rain lashed down outside.
Today was 12 Miles and only about 1200 feet of uphill.  The going was reasonably easy, and improves with Eastwards progress. 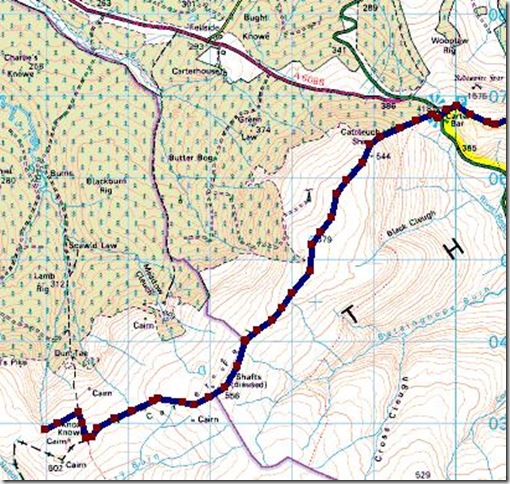 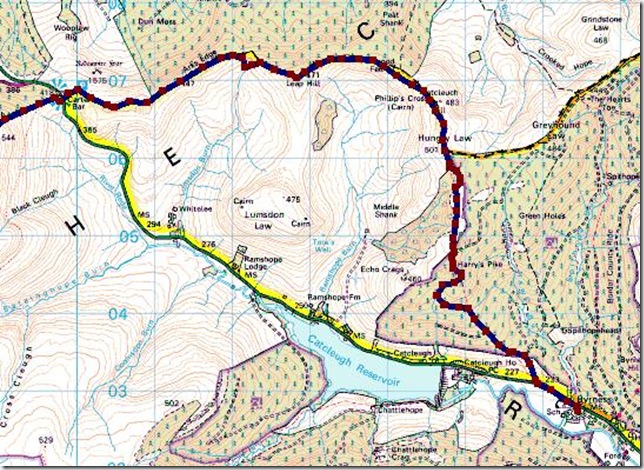 I love the 'Drive on the left' and 'Out' signs....a bit like when you drive from Lancashire into Yorkshire!

Bloody irritating when local authorities don't bother when footpaths and bridleways are locked / blocked / planted over. They would soon shape themselves if a metalled road blocked.

Word: foark. As in Northumbria CC couldn't give a...?

....I didn't realise Dawn had joined you on your trip. I was wondering where she'd got to.

Northumbria CC's comment on a previously reported comedy path was that it wasn't used very much. Dhuhhh....
Ashley, I think Dawn might enjoy this countryside...

Hi Mike.., do you remember me from other sites, my alias is DARKSKY , anyhow ive been looking over some of your blogs and your pix are amazing, anyway just thought i would say hello and hope your well and everything,....bye for now...KRIS.