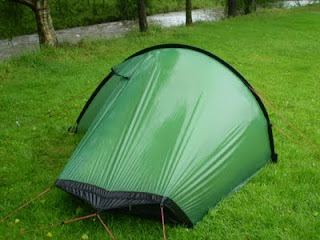 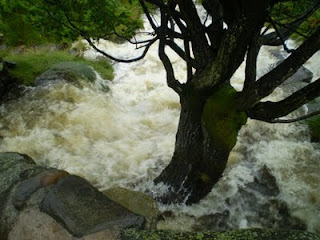 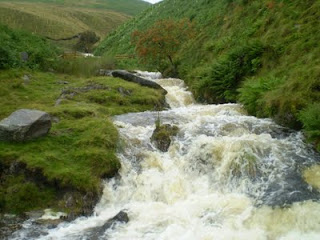 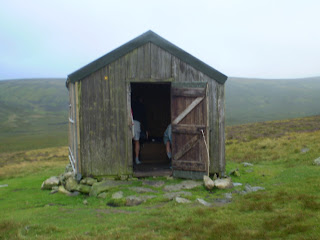 The LDNP forecast had arrived half a day late and continued in a blustery, spatterry kind of way all night. The little beck by the campsite started raging (something about Chelsea beating man United recently or something. Apparently they wuz robbed…) Anyway, it got very deep and brown.

I determined not to set off anywhere just yet, and brewed and dozed, eventually abandoning all hope of dry socks and packing up and leaving – about elevenish, I think.

The traffic levels on the A66 indicated a general evacuation of Cumbria was going on. It took me ages before I could dash across the road…

I took the path past the Blencathra centre – an old mine road that leads up to the Cumbria Way coming out of Keswick and then to Skiddaw House. I lost the strap of my walking pole at one point.

And then, whilst crossing a footbridge, the clip on my platypus tube caught on something and the mouth-bitey thing fell off into the raging waters and was carried away. I swear I heard it scream in despair. The pressurized contents of the bag formed a beautiful and slightly oirnate fountain, most of which went down the back on my neck. I could tell, somehow, that perhaps it was going to be one of thoise days.

The staff at Skiddaw house were hiding behind the sofas and had locked the doors. They were pretending not to be in, but there was a giveaway smell of woodsmoke.
I could see their boots and there was giggling, I think.

I splashed on, along the Cumbria Way. The becks were surrounding the footbridges. My waterproof socks had each gathered a couple of pints.

I though I might camp at the point where the CW hurtles off up the hill to Lingy Hut but the warning signs said that if I tried that trick (“sunshine”) they’d be sure to call the cops and have me struck off or strung up or otherwise dealt with harshly.

I set off towards Lingy Hut. On the way down, coming towards me, that is (cos I was going up…!) came Mike and Annette who, during the subsequent interrogation, revealed that they had been up on the tops and had suddenly formed an opinion that they weren’t in the right place at all and they’d better give it up for a safer route to Caldbeck around the bottom.

For some reason, they then formed the opinion that I had persuaded them to have another go. So we all struggled off through the squishy bogs and heather and emerged damply on the plateau around about the same time as it stopped raining.

Annette, who turned out to be in charge, then declared that they would have an adventure and spend the night in Lingy Hut.

Which is what we all did.

It was very breezy and my whisky supply evaporated somehow.

Its not a bad spot, but it does have plenty of “ventilation”

I did point out to Mike at one point that his pet name for Annette was also the term for an outside loo in North-east England. Netty, as he called her, and Mike were devastatingly over-equipped. This resulted in a comfier night for this pair than you would normally expect.

Various visitors called during the evening. It got quite busy.

Lingy hut is a great spot to spend the night. I'm sure the views are good but I had none last time I was there. You cant beat a shed on a hill.

On a good day, views Eastwards include the Pennines. There's also the back of Blencathra and nearby carrock fell. Views West are blocked by the hill.
I expect dawn's are great for those, unlike me, who can't sleep the full night....
It is an interesting place, though.
Carry water up cos the tap don't work