Rather than causing panic, annoyance, frustration or a nasty nervous rash to blogreaders, I’ve restored this deleted copy of “cabin fever” I’ve changed it a bit cos the original had a video of superdawg barking at the snow, but as it wouldn’t load (the reason for deletion), I got irritated and binned it in a fit of pique.

So here it is….  I hope it was worth it (there’s two ways of saying that phrase y’know…)

I was supposed to have a walk today, but there’s been a bit of a blizzard going on and off all day and the snow is deep and crisp and not very even, so instead, I put up some fairy lights on the holly tree and some around the window and did a bit of creative writing – and learned the chords for “Different for Girls” (Joe Jackson – not specially difficult to play badly) So I might go tomorrow.

Its even too tricky on the roads to go and get a Christmas tree – the knipemobile is stuck in the garage as it happens and the police have announced that shopping for Christmas trees is not Essential Travel. Its true, it were on the news.

Superdawg’s new antlers will similarly have to wait for a pause in the storm.

But here’s a short film starring Superdawg.  He’s having a bark, obviously.

Bugger it – you’ll just have to make do with a picture.

Here’s Bruno balancing on one of the knipetowers’ snowdrifts. The video is marginally more interesting. 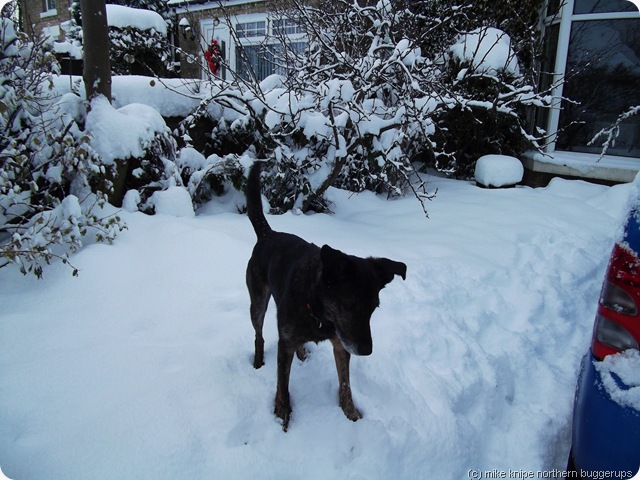 Shame about the antlers.....

There are antlers in the factory shop they are supposed to be for tots but I'm sure we can glue them to Bruno's head. All you need then is a sledge and a sack of cats.

Shame about he video Mike. And the stress caused.
Was SUPERDOG barking to Deck the halls with boughs of Holly by any chance.
Or did he just do a McKeith.
I must get away from the telly.

Rachel - di you notice if they had any angel wings as well? I thgink Bruno would look nice with some wings.....
Superdawg just barks, Alan. Luckily I have no idea who or what a McKeith is...
Antlers coming up, Laura.
We just had a snowy walk, so there'll be a very snowy blog post quite soon....

I'll go have a look. I'm sure they have angel wings, would pink be OK?

Pink suits him I think. Nice wand too ...You shall go to the ball, Cinders....

He looks good with the wings and antlers on. I can't believe he just let me put them on him.

Mike, a McKeith is a small Scottish woman who has a pretend Doctorate and is obsessed with other people's excrement. Have you ever thought of becoming a High Court judge?

Pics of the angel of the north coming up...
Peter - Now you mention it, I am quite fond of long, liquid lunches involving consumption of fine port and brandy. I believe I could be a success. What's the hours like?