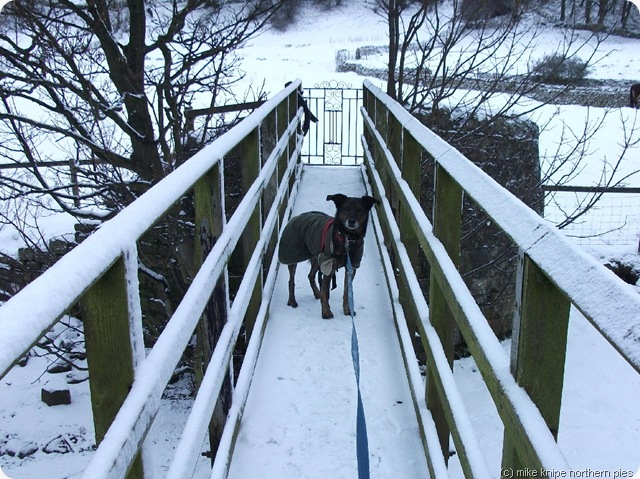 That’s it – I’m abandoning all walking activities for the rest of the year. Its much too snowy out there.

This morning, I set off twice for Cowshill for the bagging of Middlehope Moor. The first time I got as far as Crook roundabout, then came home due to slippery road conditions.

So I had a coffee and waited till it stopped snowing and then set off again – and this time I got as far as Cowshill, but the knipemobile refused to be coaxed through the deep snow into the car park – so I went down the road to St Johns Chapel and started from there.

All went well at first. It was all very pretty and wintery and then, after climbing the hill, we entered an ancient lane up onto the moor and started to hit trouble. Trouble in this case being very soft snow. 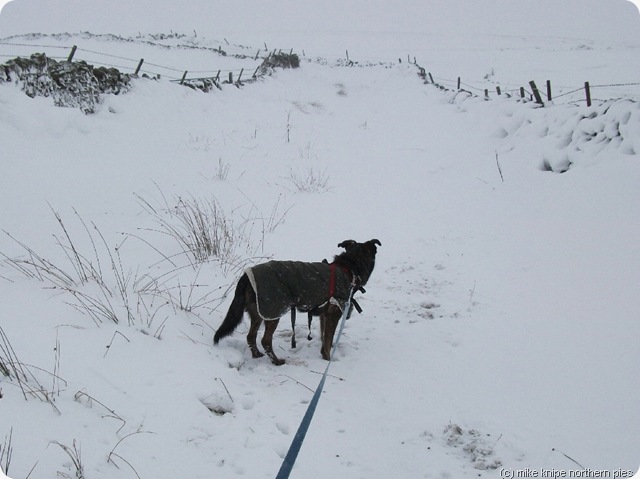 There may be trouble ahead…..

Trouble got worse a bit higher when the snow reached underwear depths – the structure being a thin crust, a foot of soft, wet snow and another foot or so of powder snow and, finally, a layer of ice.

Feet, that is to say, legs, plunged through the crust at every step and didn’t even go straight down – no, they went to the sides. This resulted in falling over every couple of steps. It was too deep even to lift the feet high enough to take the next step. At one point both me and superdawg resorted to a doggy paddle. We were quickly running out of steam. 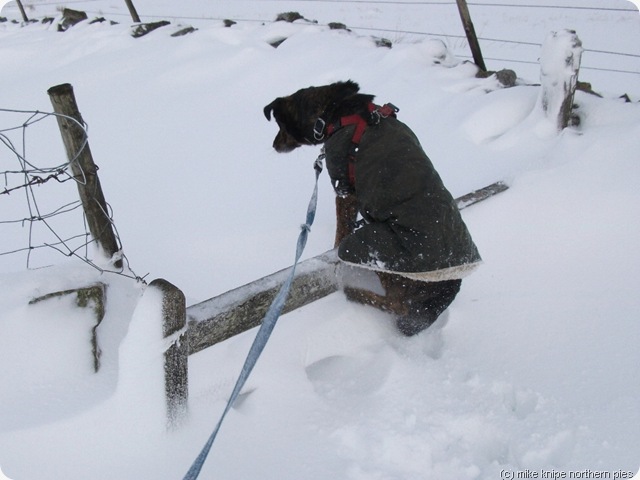 Then, I walked on the top of the wall, which I noticed sticking out of the snow. This was OK till I fell off. Then Bruno got completely stuck in the snow and appeared to have given up. I hauled him out. 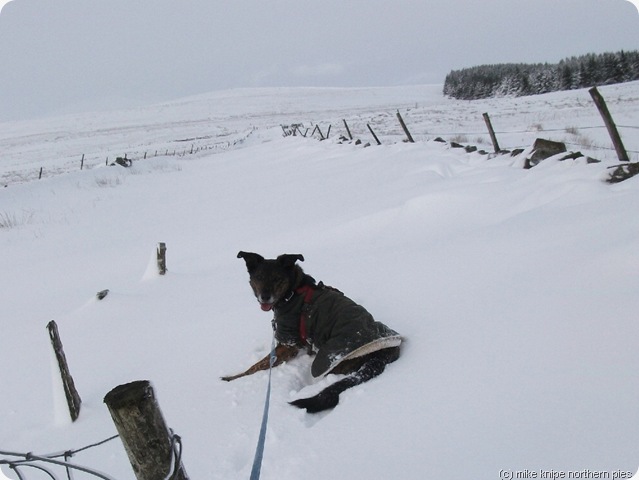 …running out of steam….

We made for a gate over there, which I knew would give access to the road to Rookhope. The next two hundred metres took half an hour.

We reached the road. It was there somewhere under some hard packed snow. This provided easier walking. We arrived at the place where we should turn off on a bridleway which would give us access to Middlehope Moor. It was under six feet of soft snow. 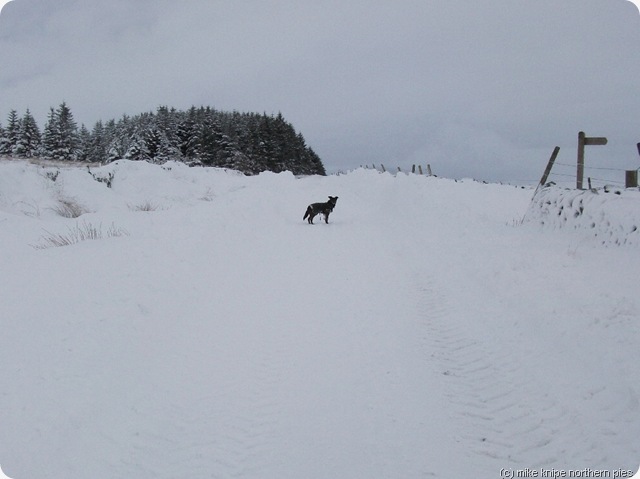 Easier going on the road to Rookhope

Another chap from the dale arrived with his dog and gave up too. 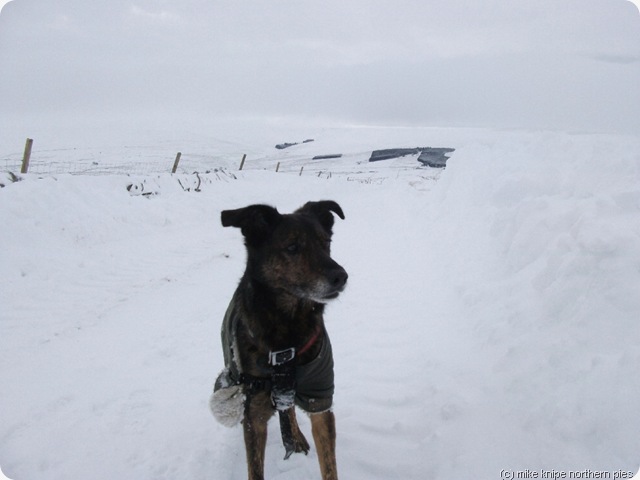 Superdawg detects somebody with a packet of crisps over in Norway.

We returned to the Weardale and I used the always pleasant riverside path to return to St Johns Chapel. 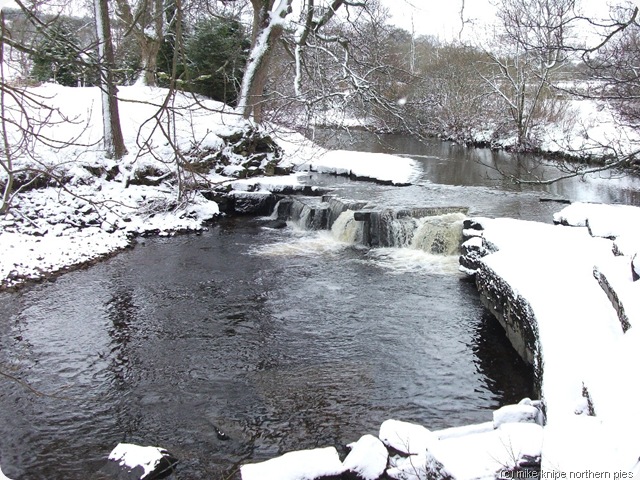 It started snowing again. I read the Northern Echo till it stopped and then went home.

Snow shoes would be a really good idea.

5 Miles and 750 feet. Shudder been more. Felt like more anyway… 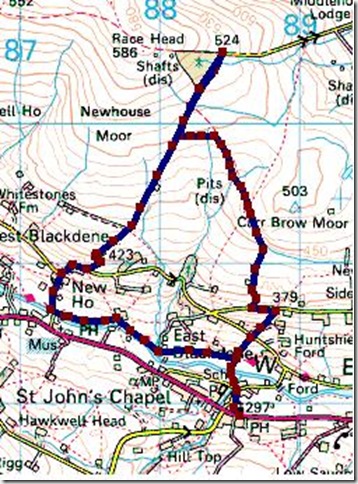 Wow, it looks a bit rum there!

The ice & snow that stopped the residents of Timperley venturing outside (well, those who don't have croutons for their boots) has now gone.

The views from my window over to the Peak District tell a different story - the hills are white with snow.

Nippy nuts nobody needs - Crisps, Norway, how does he do it?

Have a great next year and I'll see you in June....possibly

It was a right rum do, John.
Ah, yes, June, Pete, its in the diary.... hopefully the snow will have hardened up a bit by then...

I notice Bruno is wearing a cape. Is that because he's a Superdawg? Does he get changed in a phone box?

Arf arf - Happy New Year Judith
I thought the cape was fairly discrete - eg the motto "SD" is on the inside as is the cartoon bone logo.
In view of the lack of phone boxes nowadays, he gets changed in the back of the car.
I must have a word with him about his underwear....phew....

Very useful report: those are exactly the conditions I was afraid of (as well as the roads), exhausting body-wrenching deep snow. A couple of years back we tried to climg Aran Benllyn in similar conditions and got about 1.5 miles and gave up. We were too exhausted to go on. It's hard to judge the hill conditions from here, there isn't so much as a flake on the Cheshire plain!.
Anyway good pictures, and a Happy New Year.

So it's still really snowy up there, then??? Piglet and I are meant to be walking in the Dales next week with Colin and now I@m wondering whether we're going to be able to make any progress at all! If Bruno can't do it then Piggly stands little chance, poor mite.

Piggly admires Bruno's coat very much. She has a new coat herself, heh :) Looks like she'll need a snowboard, though.

Rather a nice word today = cottench.

Surprised you made it as far as Cowshill.

Love the snow but today was hard. I set off about 7 to head to Aviemore for a few days.

Got up Billy Row bank and somehow ploughed through the very deep snow at the other side of Sunniside before deciding at Tow Law to go via the A1.

Eventually got as far as Alnwick before getting stuck in a car park when trying to pull over for the loo. Gave up and headed home, now off to the lakes tomorrow with Phil Turner.

Oh did you ever get to use that wood you left up above Nenthead.

Geoff/Peewiglet - This is NE England which catches a lot of snow given a NE wind, so the conditions in your chosen areas could be different.
I suspect, though, that its generally like this on most hills just now.
A freeze/thaw cycle or two will sort it out - though it'll probably take longer than a week... and I noticed today that any wind-blown snowdrifts were very hard - the snow was blowing about a foot off the ground for long distances and must have been knocking off al the fluffy bits.
Steven - Thats a shame, in a way, although I noticed that the SAIS reports for the Cairngorms look a tad scary at the moment.... maybe its an ill wind....?

An ill wind, eh? Perhaps it's that blasted bug again :(

Ooh, word = famis. How extremely appropriate. I'm starving, and just off to make something to eat :)

It sounds like you may be on the mend, Shirley. This could well be a good sign!