Worra horrid, dreich sort of morning it was this morning.

“C’mon Bruno”, says me “get yer walking stuff on, we’re off up Collier Law”

“Bugger Off” growls the dog with a just hint of threat.

And he was right. I poked me head out of the curtains and it was chucking it down, but this time it was white stuff.

I determined to have an excuse. I decided that my Scarpa heavy winter boots had shredded my ankle so much (sniff!) that I couldn’t possibly walk further than the kettle in the kitchen.

Later, by way of entertainment, it being far too chilly to tear myself away from warm radiators and a never-ending supply of eyebrow-lifting strong coffee, I decided to get creative and, as its Christmas (you must have noticed this, surely…), I put my sparkly Christmas hat on and made some mince pies, including rolling out the pastry and everything. Its remarkable, isn’t it how clean this activity gets your fingernails.

Then, acting on a suggestion by one Graeme aka Angry Climber from somewhere up in Scotland, I made some “special” flapjack – this time flavoured with tia maria (no, honestly…) and containing much dried fruit and ginger and covered in milk chocolate, and in the series of cakes so far including Arsenal FC and Famous jockey Willie Carson, and this time dedicated to that veteran pioneer of TV cookery Fanny Craddock.

Here’s the picture (writing a bit shaky due to nerves…) 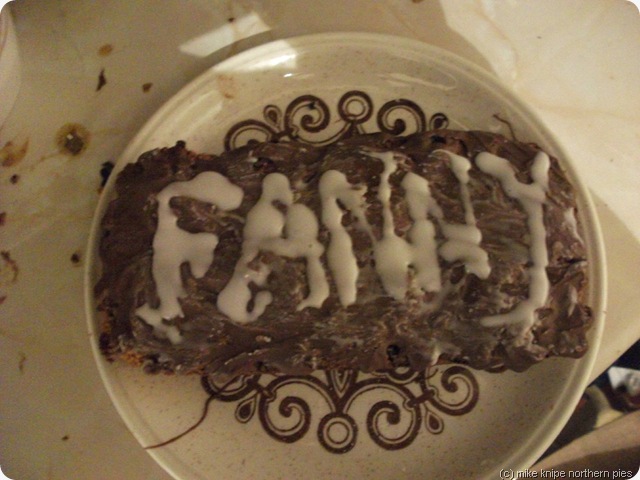 Thanks to Graeme for the suggestion.

Any other suggestions for cake dedications will be received with thanks, in fact, in the words of the famous Brian the Irrelevant, who had serious problems with punctuation - “I can’t thank you. Enough!”

Lakes tomorrow if I can get the car out. In any event, I'll likely be doing the Fanny cake some serious damage.

Ooh, that looks good! And I used to have a plate like that. Suddenly I realise that I have no idea where it's gone...

“Bugger Off” growls the dog with a just hint of threat.

Heh. Piglet does that sometimes, but her threats aren't quite as convincing as Bruno's.

I can confirm, though that the flapjack is quite nice.

We have loads of plates like this by the way (gerroff!)

Really surpassed yourself this time Mike.nollsco

Sorry..it's a form of Tourettes.

I think TV sports celebrity Dickie Davies could be the next to be honoured with a cake.

This one is spectacularly nice by the way - mostly gone, now....