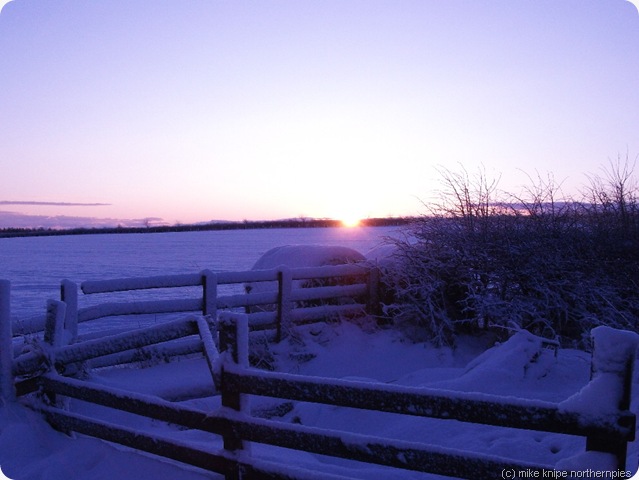 He told me that Nenthead, at the time was in the grip of a bit of a blizzard and that the roads weren’t too good. We cancelled the solstice vigil at Deadstones in favour of cosy fires and a night in front of the telly with (in my case) a warm dog.

It was probably just as well, because, in the morning the Hartside Pass and the Stainmore (A66) cross-Pennine routes had both closed due to snowfalls. 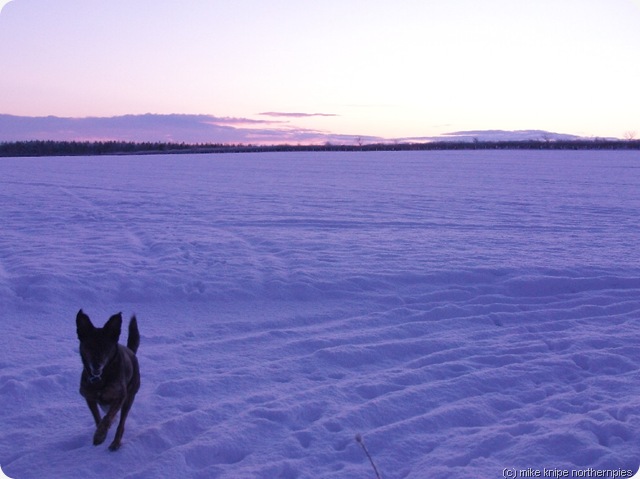 Happiness is bouncing around in the snow

We may return to Deadstones in the next few days if the weather calms down a bit.

And, so, having missed the winter solstice, I decided to witness winter solstice plus one minute (the extra length of today’s daylight0 from our nearest hill – a place in horse-grazing pastures some 800 feet above sea level just 3 kilometres from Chez Knipe and with a reasonable view of Durham’s limestone plateau over to the East.

I took the dog.

He bounced around in the snow. 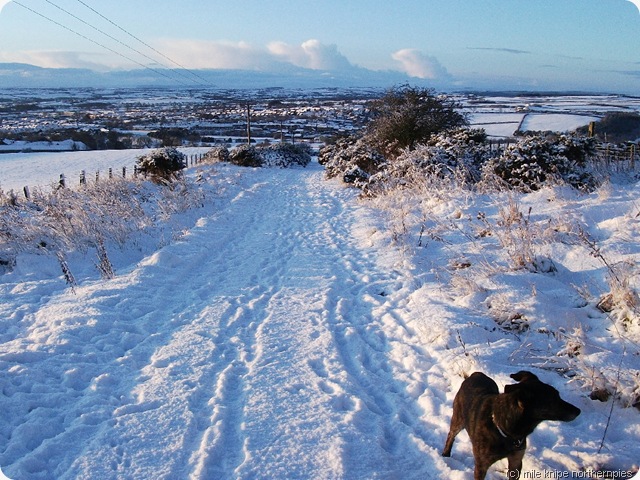 Deerness Valley walk down to Crook

The dawn was barely adequate, but a bit pink and blue just a few minutes later when there were elements of beauty. A gay dawn, probably. It didn’t feel all that cold, maybe we’re getting used to it. The thermometer was showing minus four.

There were foxy footprints in the snow.

So we minced off back home for another warming breakfast. Quite good fun, really.

The King is Dead. Long Live the King.

Happy Yule, its all a bit lighter from here.

I remember how happy my dog was in the beginning of winter, when the first snow fell and we went for a walk - much like yours, bouncing around in the new, fun element! Lovely pictures, Mike.

Ah, well, there you are Hendrick, he ,loves the white stuff... - Happy Christmas from mme and superdawg....

The state of the roads doesn't leave many possibilities for tackling the North Pennines, at least not for a cautious driver like me!. Cross Fell must be something else at the moment though, great stuff.
Best wishes for the season and 2010.

Quite, Geoff - I had a drive up Weardale later on the 23rd and the Killhope Cross road had also closed, so its just as well I didn't venture up there or I would have got the car stuck (I'd have been in the Miners Arms at Nenthead!)
But its all much better now, and still much snow.
Plans are in place for a possible trip on Sunday....

Wimp!
So you had a lie in! I was thinking off your sojourn in the 'bothy' as the sun rose over the M56!

I got up pre-dawn, Martin. Mind you, dawn was half past eight....

I had to have a nap afterwards to build up strength for my main afternoon snooze.