A thousand miles on Kinder 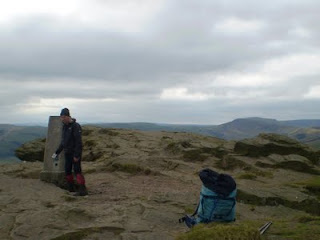 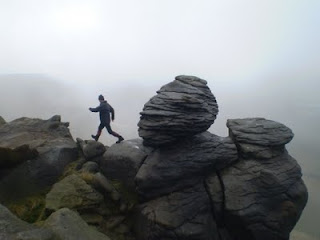 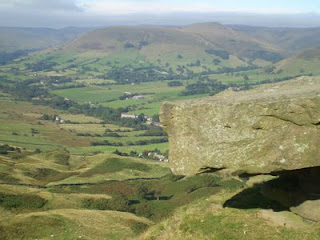 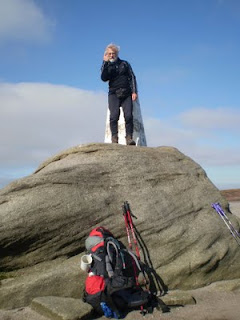 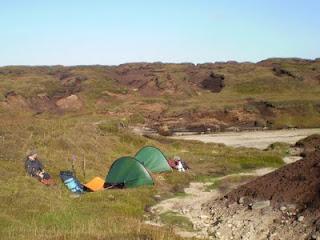 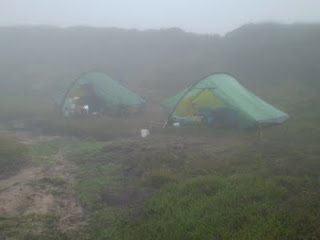 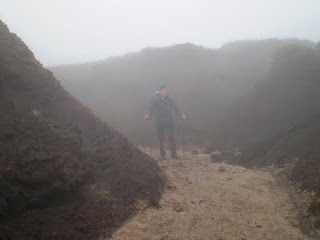 Tony Bennet (Pennineranger blogger – not the singer…) came up with the idea for this.
The plan was simply to walk along the Lose Hill – Mam Tor Ridge, then on up to Kinder Downfall, camp for the night and then return along the Southern Kinder edge and finish off with Win Hill.
Which is what we did.
I travelled down to Derbyshire by train and camped at Laneside Caravan park and was joined in the pub by Tony at some point in the evening.
Fortified by a Hope café breakfast, we left Hope (..er.. left All Hope….) on a beautiful summer’s morning and quickly bagged Lose Hill.
The walk along to Mam Tor was, as usual, a joy. Its justifiably popular, to such an extent that you’d be hard put to have a quiet wee.
Anyway, the walk went straightforwardly enough and after passing over Rushup Edge we turned North over Brown Knoll on to Kinder.
Here, we met various ladies in pink angel wings, out of a hen “do”. And we shared the trig with them whilst I celebrated my 1000th walking mile in 2009. (Pic shows a one fingered salute – that’s one thousand, not a rude gesture about swivelling.)
Kinder Downfall was devoid of any water, and the Kinder River above it had just standing pools, which didn’t specially bode well for camping. However, we pitched up on a sheltered spot that Tony had camped on previously (he seemed to be very familiar with a particular boulder which needed to be moved to ensure a comfy night0
And so, to the sound of the Manchester Airport aircraft stack, we settled in for the night.
The morning dawned grey and misty with some gently drifting hill fog and soggy tents. We followed the river and hags up on to the peaty top and, on a rough bearing over the watershed to meet the edge which we then followed Eastwards. Eventually, and rather suddenly, the hillfog lifted and we got a grand view of yesterday’s walk along the Mam Tor ridge.
One chap along the way had no idea where he was and asked for the names of locaal features and for directions and a group of senior walkers discovered after a brief chat thet they were heading in exactly the opposite direction to where they were supposed to be going.
By dint of much plodding in the right direction, however, we soon arrived at the summit of Win Hill, which was about to be occupied by a large number of what appeared to be a DofE expedition, intent on camping, in a tilted and breezy kind of way on the summit.
And that was pretty much it. This is a cracking route. Don’t do it, though, if you are a grumpy old rambler who objects to other people being on the same hill – because there’s lots and lots of people everywhere on these hills. Its absolutely heaving with walkers and their dogs and mountain bikers without bells. And there’s a healthy level of air traffic above too – and, even in the middle of the black bog, the sound of motorbikes on far distant roads can be clearly heard. This is no place for quiet meditation. I don’t mind the people and dogs, really. I find these busy places in the hills quite interesting. But if you want quiet – go somewhere else.
Thanks to Tony for a cracking weekend and for the idea...
I will walk five hundred miles and I will walk five hundred more just to be the man who walked a thousand miles... dum de do.....
Posted by Mike Knipe at 12:23

Well that just about says it all. I hardly need to write my blog (but I will) - I could just copy and paste yours (which I won't). Amongst the catalogue of noises, you omitted to mention a certain person humming to Kylie tunes on an mp3 player :) and our rip roaring renditions of some Oldham Tinkers favourites.

Fabbo weekend. Thanks Mike. I look forward to that Howgills trip whenever.

Oh, the doss 'ouse where we used to stay
Turned and old fellow's whiskers grey
We hadn't any light or any heat (dark and cold)
The ouse was doubly rented and the bedclothes they were scented
By the perfume of the lodger's sweatyfeet (worra smell....)
Oldham Tinkers 198?