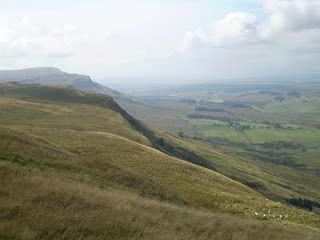 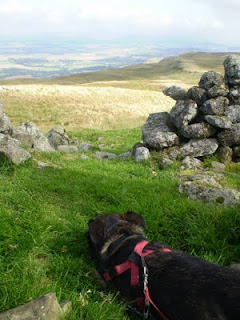 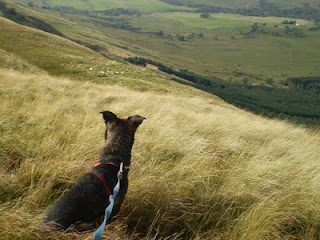 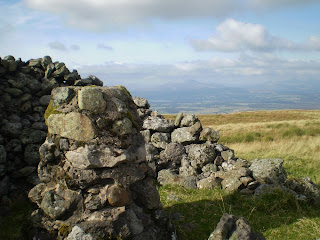 From my forward operating base (ahem) at Mains farm campsite at Thornhill, I drove the few miles to the foot of the Campsies, at a place near Keir Knowe, an unusual motte-like earthwork, I parked the knipemobile on the verge, saddled up the dog and inserted myself up the track to Spout of Ballochleam, avoiding some suckler cows by the deft use of a deep dell or gill, or whatever they’re called up here – anyway, the cows couldn’t see me or the dog. The local buzzards probably could see us, though and were wheeling and mewing over the top of us in a vulture-like way.
And I just followed the track which climbs over a heathery ridge past a little bothy with a keeper working in it, and almost to the summit of Carleatheran – a very easy way up.
Carleatheran appears to have an almost-Welsh name, a very large ancient cairn and a trig/shelter on the top and, from the top of the scarp a few hundred metres North, a stupendous view of the middle bit of Scotland.
And, whilst we're talking about names, these hills are, according to my OS map anyway, The Campsie Fells. You see, Fells aren't just for Cumbria and the Pennines, Scots can have them too...
The scarp is a remarkable feature and runs for several miles, more or less East-West with few chinks in its armour (for the finding of a comfy way up or down). It would be worthwhile following the scarp all the way from one end to the other…..
After a lazy lunch in the sun in the summit shelter, I followed the edge of the scarp back down to the Spout of Ballochleam.
Things then got a bit tough for a while. I handrailed the Boquhan Burn uphill for a mile or so of tough heather, bog and tussocks. It got easier with a bit more altitude, though and a vague ridge took me to the summit of Stronend with another trig in a shelter. The scarp slope took us back to the neb overlooking Keir Knowe, which I’d noticed earlier has a crag-free descent back to the car.
This is fab walking country and, apart from the keeper and a distant view of a shepherd on an ATV, I saw nobody else. Maybe it was Thursday. Maybe its just very quiet anyway.
I did about 13 miles and 2200 feet of up.
The shop at Kippen provided a cheap bottle of vino collapso for post-walk and post-birth celebrations. Bruno wasnlt allowed any as he’s not old enough.
Posted by Mike Knipe at 11:14

I've still to do this pair. Was planning to do Stronend from Todholes (where you parked,I assume, for Meikle Bin - wee car park at side of road opposite wind farm). I was also going to do it in frost as I had always assumed these hills to be a wee bit boggy, though from your description it doesn't appear to be too bad underfoot.

Do like your "south of the border" take on our topography Mike(lol) !

I noticed a very large parking space at Baillie Bow's bridge on thje Craigend - Gargunnock road which gives good acess to the track "up the middle". probably a grouse parety RV point, I shouldn't wonder. I parked about a mile east of this on a small bit of verge.
These moors are a bit squishy, but mainly very heathery grouse moors and quite tough going in places. Nothing compared to a Pennine hill - so I didnt mention it...
Best time would be late May with yer skylarks and meadow pipits singing....