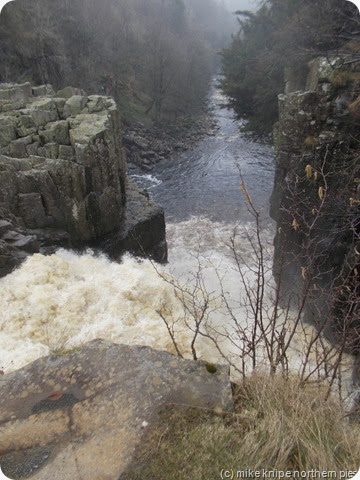 To start off, I’d just like to say “aaargh” “bleghhh” and “sniffle” because as a reward for 37 happy years of wedded bliss, my wife or loved one has been very kind to give me a steaming great cold complete with supplementary chest cough.

So I wasn’t all that surprised when the main steward for this walk, Compulsory Dave, texted me with a message saying that he wasn’t very well at all , so, instead of C. Dave, we had the sickeningly healthy Eric and the ever-robust Kathy to be stewards on the walk. Fourteen fully-fit and enthusiastic punters also turned up on a fairly glum and grey misty sort of morning – the kind of morning which encourages an extra hour or two in a nice and cosy bed with a lovely cup of tea and some well-marmaladed toast and, perhaps a snuggle up to a warm bum, or even a hot brown mongrel. 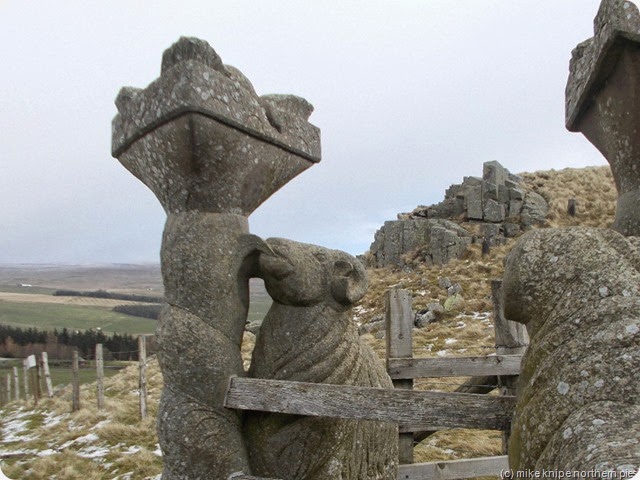 But, since people had made the effort and in the face of struggles with Neville’s Cross traffic lights and fog-bound moors above Stanhope, we felt it best, to press ahead with the walk which was, in fact, fairly easy really. 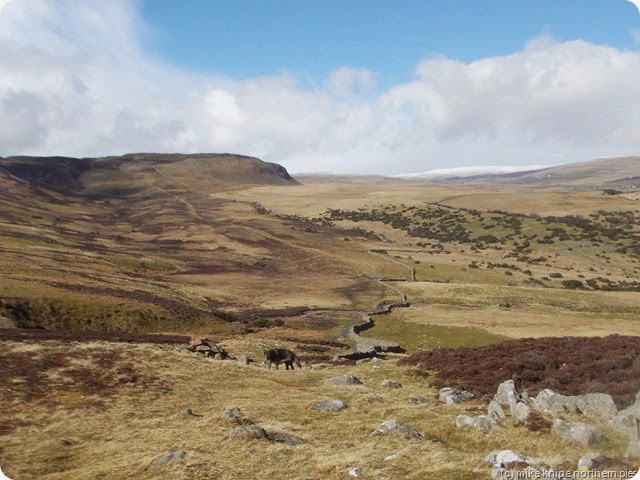 We crossed the Tees and splodged through the mud up to Holwick, passing the Earl of Strathmore’s stone sheep and on to a good track overlooking the Tees. I’d been this way a week earlier with my hot brown mongrel, Bruno in cold sunshine and a few snow showers, but with much fabber views than today. 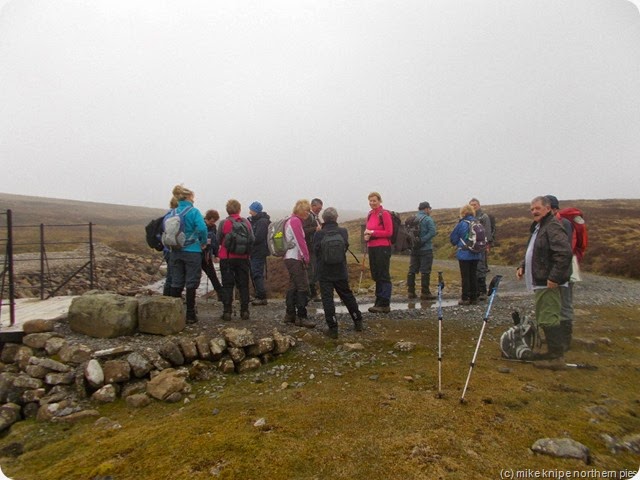 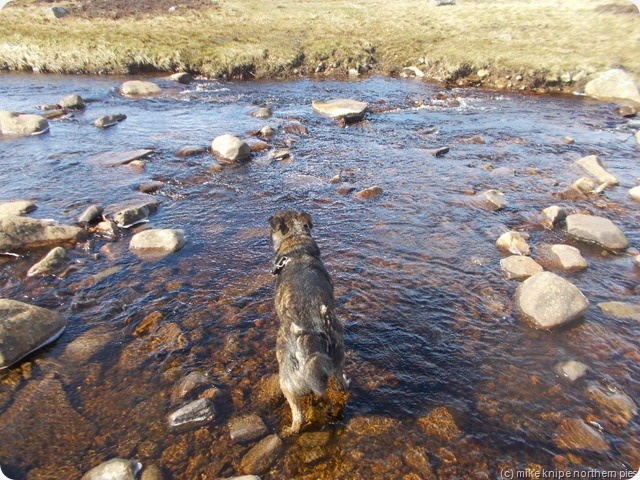 There are three lively becks to cross. The first one, Blea Beck is the big ‘un. And , as it had rained gently for most of Friday and the beck at Bowlees was a bit higher than normal, we avoided any wettings by going for the bridge a  bit upstream. 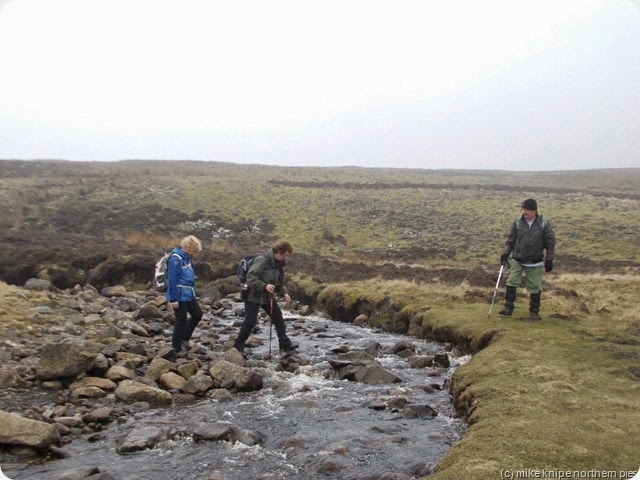 The second beck was crossed without too much incident and only a few wet socks. 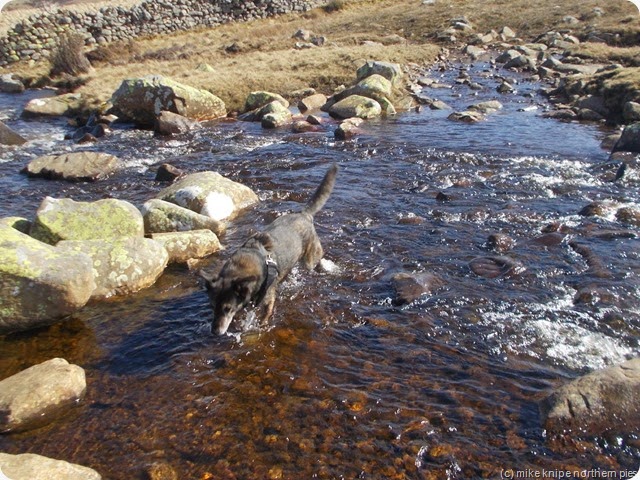 The third beck proved a problem, however. There are stepping stoones, but, having fallen off these on a previous walk, and , in the expectation that I was going to get wet anyway, I basically just splodged across. Some walkers made it across the stones. Others followed my route. Some went upstream. One fell in, backwards. It wasn’t drowningly deep, though, so the penalty was just a wet pack and bum (worra good name for a ramblers pub by the way…). And so we lunched on the stones by the beck or by the ancient felldyke, just out of the reach of the searching breeze. 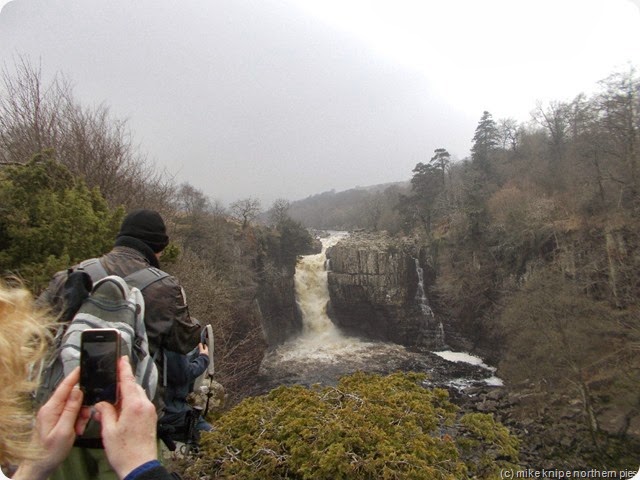 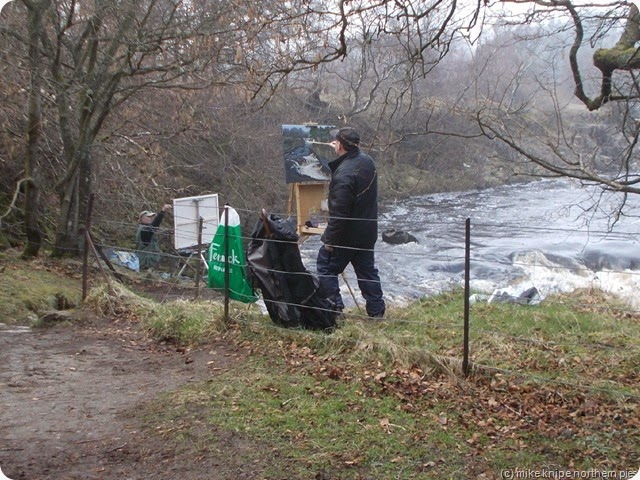 The rest of the walk was fairly routine, down along the Pennine Way passing High Force and Low Force with plenty of walkers coming the other way and a couple of artists doing a fine job at Low Force.

Most of today’s blog pics are from me and Bruno’s reccy, with just the odd one from the guided walk. 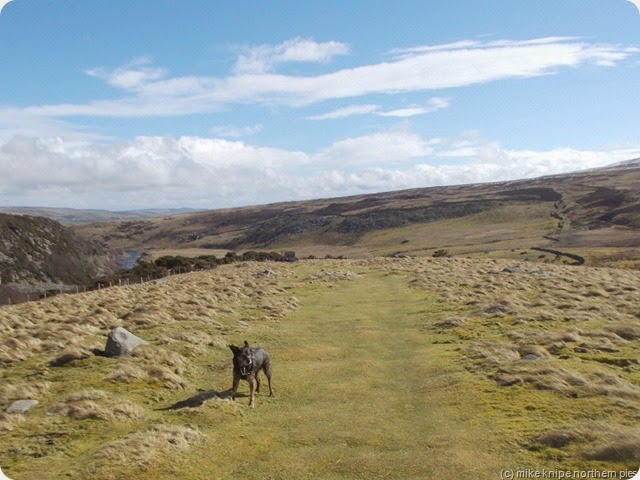 And there’s a map,the flood route goes to White Rigg where there’s a bridge and then just follow the fence back to the bridleway , just in case it’s in a bad mood when you get there. (You’ll probably have to make the decision before you get there and, if it’s in serious flood, you might not be able to cross the next two becks!) 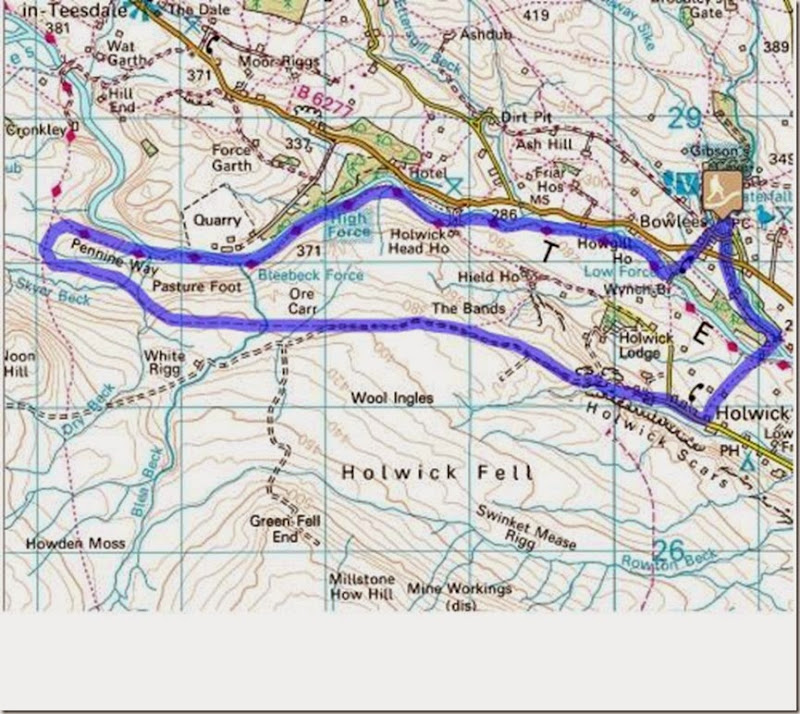 click the Mind logo to donate (see..? I worked it out!)

Thanks for another grand day yesterday. It was a bit wet underfoot and the sun threatened to come out a couple of times, but without succes.

Another lovely walk. If you didn't have maps to back up the names these places sometimes have, I wouldn't know what to think. I love this bit of map: Wat Garth, Cronkley, Hield Ho, Holwick Head Ho and the ever popular little hamlet of Dirt Pit. Tell me, in your travels have you ever come across a place called Wormelow Tump? That's one of my fave place-names in the world. It's in Herefordshire. They've got a pub with a picture of a hill with a worm sipping a big jug of brown ale called 'The Mellow Worm & Tump' (OK there isn't, but you got me thinking about pub names).

Liam - Thanks for the feedback and the dosh, Liam. (Quite generous, I thought!)
Reifyn - Dirt Pit is a lovely place, actually. I've never been to Wormelow Tump although I have sat on Lord Hereford's Knob once.

Commiserations Mike, get wellsoon. Maybe a double dose of hot toddies, medicinal compound. Looks a cracking walk though. It will be de-ja-vue next week for you!!

And I'm supposed to be back there Wednesday, Dawn for a reccy from Bowlees over the top to Wythes farm and back on the Pennine Way... blergghhh....

My mum did her teacher training - many,many years ago - (I can do dashes and brackets, too) at Neville's Cross College. (In Durham, in case you didn't know.)