Howgill Fells – Langdale Knott and The Calf and Bowderdale and Stuff 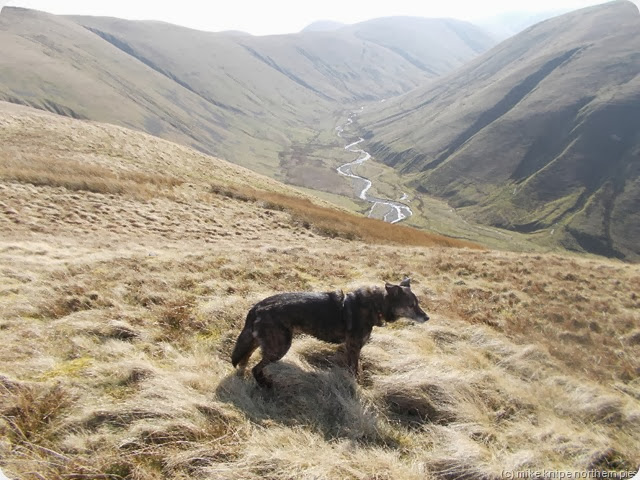 I thought I’d done all the tops in the Howgills, being a self-styled expert on them… but , no. Suddenly I see, on a scan through hillbagging that I’ve missed a couple – the famous TuMPs Langdale Knott and Bluecaster, although, strictly speaking, Bluecaster is in the main part of the Pennines and not the Howgills. I suspect, but can’t prove that I’ve been up it anyway (Cue clip from Carry On Rambling – “Have You been up it yet Mr Widdle?” , “Ooooh Warden, you are naughty…”)

Hennyway – I determined to go and bag Langdale Knott and have a nice little trundle up some Howgills at the same time. On such a nice day, it would be a pity just to do the one bagging thing. 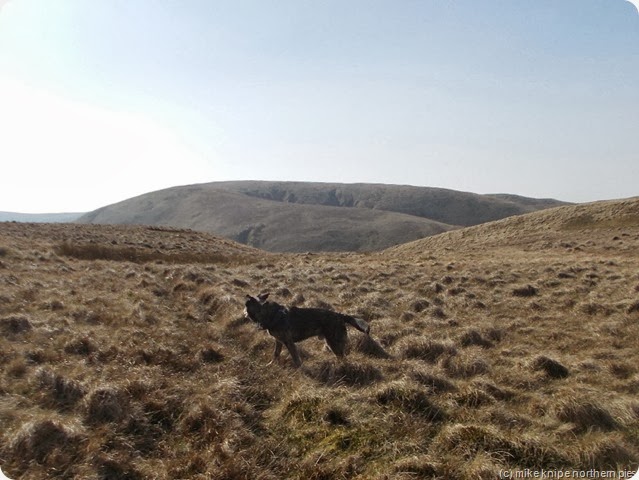 So, after an outrageously slow drive due to picking Lollipop Lady time to set off and then getting the wrong pump at the petrol station etc etc, the knipemobile was duly parked on the Chieftain Tank Parking Area at the foot of Bowderdale and me and the Dawg set off in high spirits and blue skies and skylarks and stuff for the bagging of Langdale Knott. 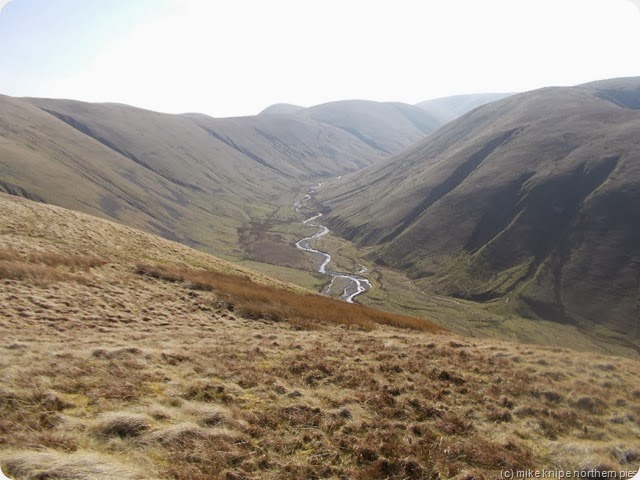 This went well. Langdale Knott is a grassy lump with a cracking view of Langdale, which is a long and narrow valley which pierces the inner sanctums (ooer..) of the Howgills and provides many an isolated and quiet camping spot with delicious clean water, flat grass, sunny sheltered spots and ponies. It goes on for miles and miles and it’s well worth a little wander on a nice day. 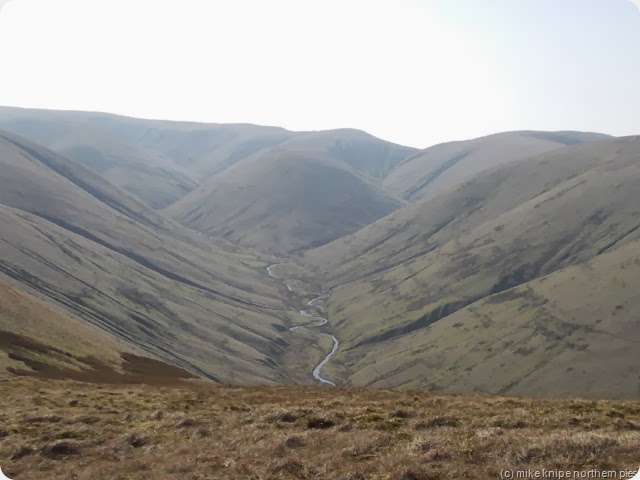 After Langdale Knott, we blundered up West Fell where we met (for the second time as it happens), a couple from Mickleton who were intent on walk involving really slow progress and then, at Hazelgill Knott, a rejected first-timer TGO challenger, who recognised my 2012 TGO fleece (the nice lime green one). He’d just asked JM to remove him from the reserve list so that he could make plans for his limited supply of annual leave. We all had chats. For a while, I thought I was back in the North-East (you have to stop for long chats in the North east – it’s a rule…) 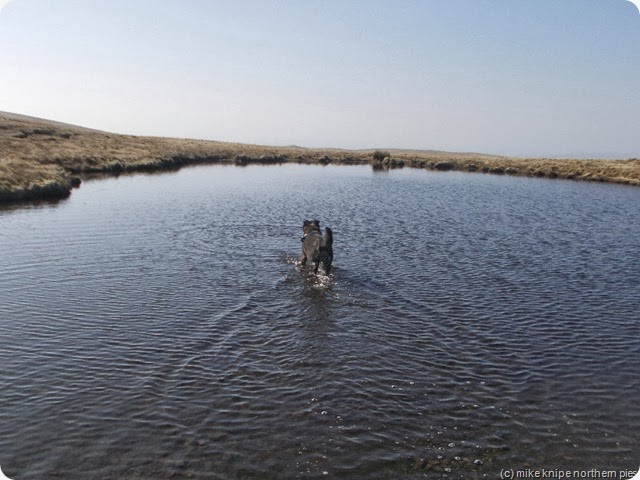 Later, there was a couple of backpackers (bless em.. sniff…)(buggers had better weather than me and dawn… grrrr…) and then, on The Calf summit (the 24th time for me by the way) (just bragging) – a couple of lads who’d driven up from Skipton and a lass out on a solo walk. Since the Howgills got a reputation for being quiet, it seems that everybody wants to go there. But there’s plenty of room. 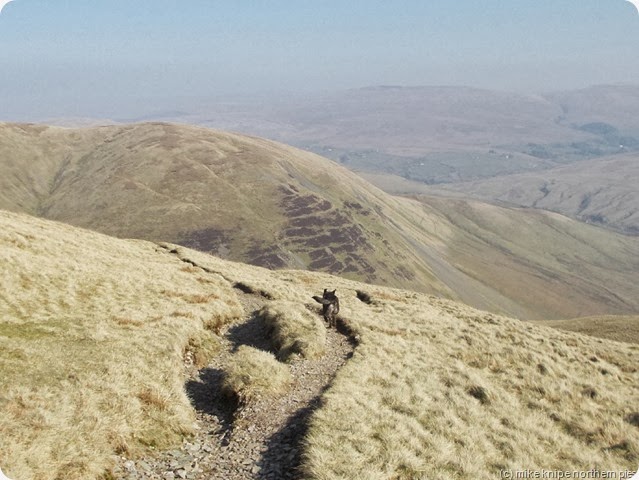 The hills were pretty quiet as far as spring-like bird noises are concerned , but I did notice a bunch of skylarks and one solitary meadow-pipit, plus the usual crows and seagulls and junior RAF pilots. The main sign of spring in yer Howgills, though, seems to be frogspawn. There’s loads of the stuff. It’s everywhere. All small puddles of cleanish water have their huge and wobbly lumps of spotty jelly. Most of this is doomed to dry up, I would have thought. Howgill frogs need no lessons in naughty rudies, but do need some instruction on the safe and secure deposition of the spawn. 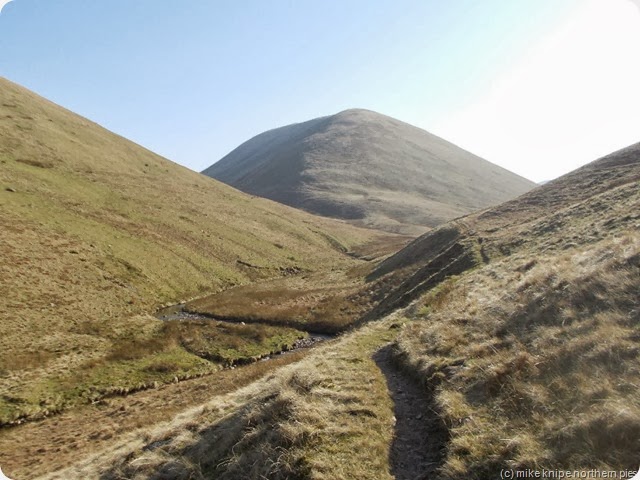 We headed off for Bowderdale which we followed all the way back to the Tank park. This took a Long Time. 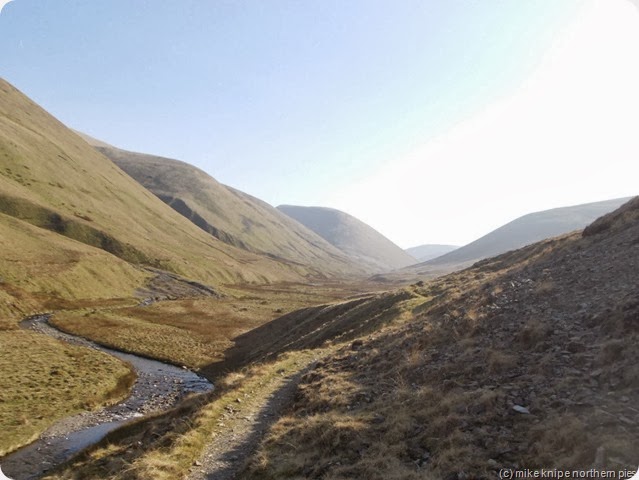 Cracking day, though – not a cloud in the sky and the total absence of sheep was a bonus for Bruno who spent the day off the lead. We did spot a few sheep at a distance and the lambing fields around Bowderdale farm had their new arrivals. 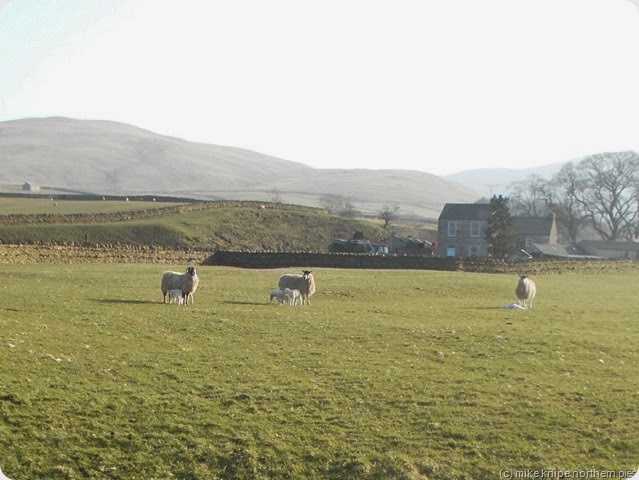 Lambing fields are a no-no as far as me and superdawg are concerned. We take some care to avoid being a bother. I’m thinking that my next trips might be in the Borders where the access framework makes it so much easier to take a route around a field full of orange-bottomed fat-bellied yows at maternity time.

Thanks to Richard for the spondoolies into the virgin money giving account by the way…  we like money!

I need to give this project a little kick, I think… 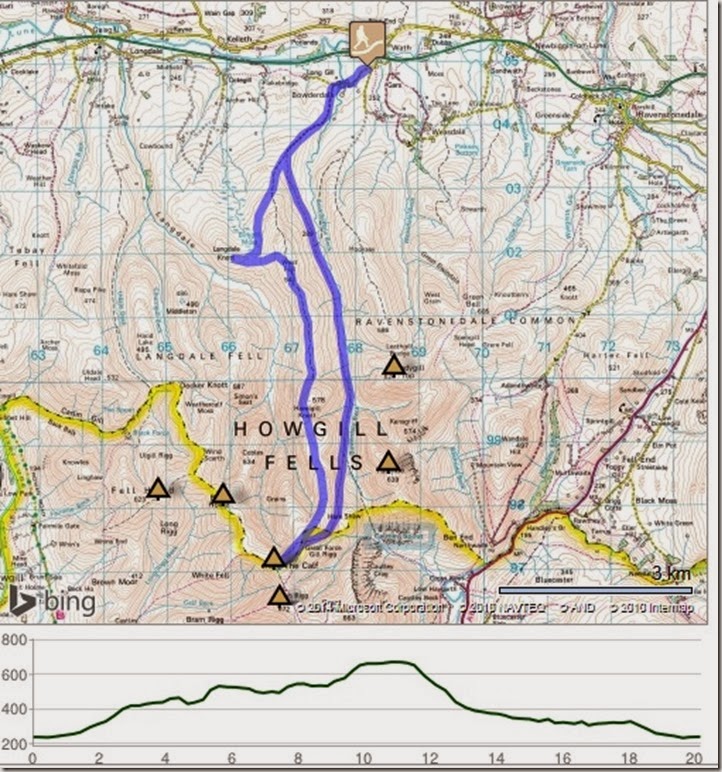 Looks a grand walk that. Are them ponies viscious? I have a thing about big animals with teeth. Or horns. Or cloven hooves.

Looks like you had a good 'un Mike.Some fantastic camping spots in there.

Fellbound: Cracking walk... the ponies seem generally disinterested in people and aren't a danger at all. Some of them run away sometimes and others have enough attention span to hold a short conversation. But nothing to worry about.
Dawn; Langdale is specially blessed with all kinds of flat and grassy spots! Nuff said....

James and I had a nice camp out in Bowderdale last November. Lovely spot.

Chrissie - Yes, I think Bowderdale looks good. I also noticed a stream on the Langdale Knott col for a higher level camp...

Hi Mike,
Nice report as normal
I like your something for something with regards to raising pennies for Mind so how about you selling your body!!!for the day sorta pimping yourself out if you like , what I propose is you escort me from say Bowlees right along the Pennine way to cow green reservoir there we can jump in a motor and drive back to Bowlees .
Conditions are! You fill my head in with what ever local knowledge that you can think of on route (doesn’t have to be true) and for this marvellous service I will bung £25.00 of my hard earned pounds into your mind fund ….something for something eh! Of course you could always try for extra brownie points for a “care in the community “type of thing.
One last thing …I like coffee & if I fall in going up Cauldron spout and die a horrible death I wish you good luck getting the dosh off my better half ( she’s very mean with money)
What do you think …………………Mick

I'm up for that, Mick. All we need to do is fix a date. My email address is in the profile on this very blog, or we could use facebook direct messaging thingy to make the arrangements. If you let me have your car keys before you fall off the waterfall, though, then I won't have such a long walk back...:)

Sorry, Paul, the tank thing is an obscure joke which only really attentive Doodlecat readers might (just) recognise. Its where the little climber on the map is... don't block the gate, though! Happy Dewey bagging - the Howgill Deweys are quite nice ones, I think...