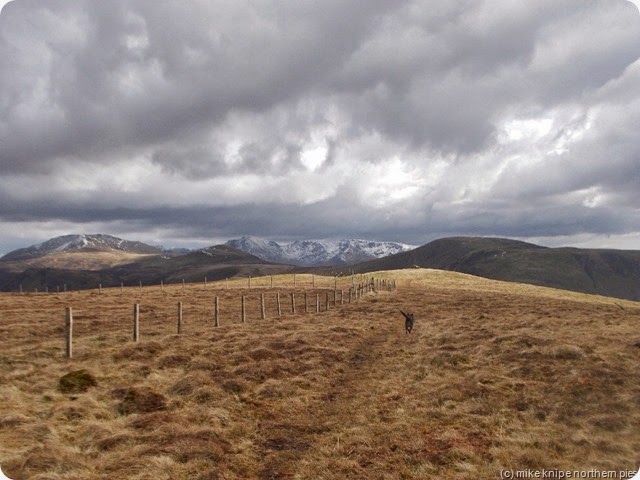 Its a long way to the Western part of the lake District, specially for a couple of fairly non-descript grassy lumps. But Bruno insisted and so, to satisfy his unexplainable and, sometimes unreasonable need to tick something off a list, we set off up  a partially-frozen Weardale, and over the tops to Alston, Penrith, Keswick, Cockermouth…..  and we eventually arrived at a free parking spot just to the right of Bowness Knott. After returning to the knipemobile to turn off the car alarm (must get that fixed..) we eventually found ourselves hurtling uphill towards Buttermere, but turning left at the timid bunch of Highland cattle to meet the fence running over Banna Fell. Banna Fell is a “Synge” and, so, is inferior in many ways to Birketts, but a nice back-up tick should anything go wrong, according to Bruno (I’m not all that bothered, obviously) 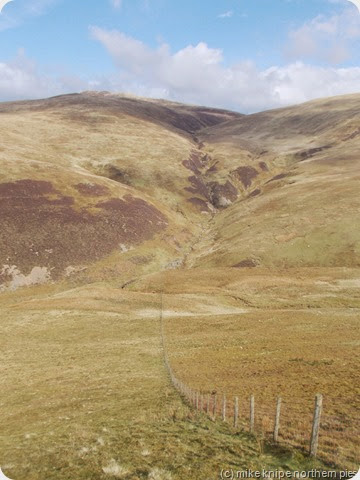 We descended steeply to Croasdale Beck, noting the wild camping flat spots, the lovely pools and also the tractor parked on a nearby hill in full view of me and the Dawg making a pig’s ear out of getting over the fence. A short climb up a side-gill put us out of sight and a traverse along some pretty brown contours gave us our first tick – Godworth, a Birkett with a little cairn and a view of the Solway Firth, the Very Lovely Criffel and the Isle of Man. We headed off for Birkett tick number two – Kelton Fell. 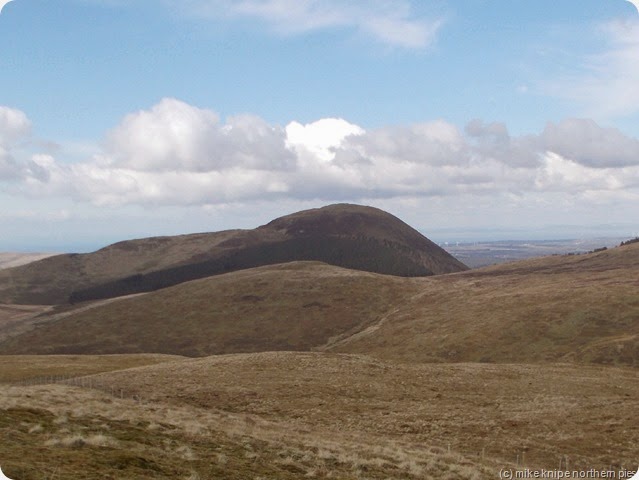 Unfortunately, the tractor and it’s occupant, apparently having lunch inside it, were parked right on top of Kelton Fell which was also occupied by a flock of Herdwicks and, being a bit diffident about trespassing through a flock of sheep with a dog in full view of a farm worker upset by the fact that he’d got cheese in his butties yet again and he didn’t like cheese (even though he made the sandwich himself the night before), and the fact that Eon had just put his gas bill up yet again,  we just sat behind the wall and had lunch in case he decided to finish-up and go off down the hill to watch Police Interceptors or Car Wars or, indeed, Jeremy Kyle with the all-important lie-detector results. Or maybe go and get the mothers day card which he’ll send to his spouse from the kids, it being mothers day quite soon, he’d just remembered…..
After half an hour of me and the Dawg sitting in the sun with a Lancashire cheese butty with pickled red cabbage, a banana and a mars bar and a flask of fair trade coffee, he was still there, apparently staring at his own cheese crumbs on his lap and grumbling darkly under his breath that next time he might try a tuna salad and why couldn’t the kids get their own card, the amount of spending money they get. So, we made a plan to have a little circuit of the hills to the North and come back to Kelton fell later when he’d have had the phone call from the wife asking what time he’d be home so that she knew when to put the minced beef on and could he get some carrots and washing-up liquid on his way home, but none of that cheap stuff his mum uses and to make sure he leaves his wellies in the porch as she’s just mopped the hallway floor and did he see the cat this morning?
So we headed uphill on a nice path with running-shoe footprints and emerged at the col, bwlch or bealach between Gavel Fell and Blake Fell. Bruno decided that Gavel fell would be where we would go, so that’s where we went. We descended back to the Highland cattle and the car via Floutern Cop (already ticked some time ago). During this descent, I noticed that tractor-man had moved his vehicle further down the hill and so, no longer occupied my summit…er…Bruno’s summit.
We drove a bit up the road and parked at the foot of the track which leads from the road back up Gavel fell and, which passes the summit of Kelton Fell a few metres to the North. Tractor man was out-of sight and doing things to the dry stone wall when we bagged Kelton fell. 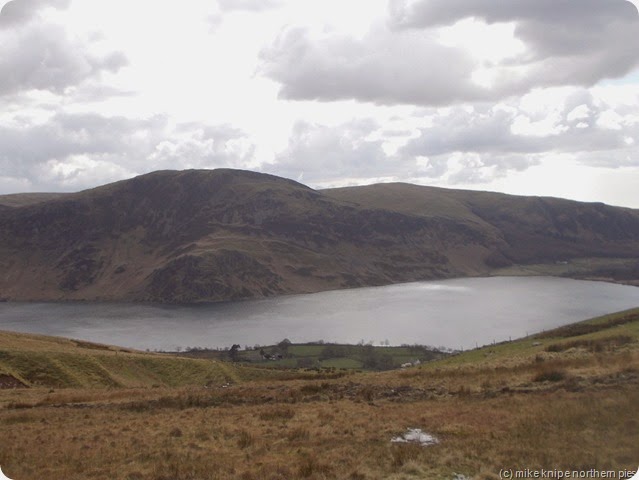 And so, that was that.
We returned via a bit of a blizzard up the A66.
We did about 8 miles. Some of those miles were on unfriendly, well-fenced territory (Banna fell) There were notices on the other side of the barbed wire entaglements. I don’t know what they said, but, I suspect that it was something on the lines of “You can’t come in here” However, we were already “in” and our main problem was getting “out”
Anyway – two more Birkett ticked for me...er Bruno – Only 27 more to go. (One of these is Pillar rock, so make that 26 – I may not be competent under any circumstances short of a lift in a helicopter to get to the top of Pillar Rock)
Finally, I’d just like to thank Judith and Andrew and Brenda for their donation of hard-earned cash via the virgin money giving site, and specially to Judith for reminding me that unless there’s something to click, nobody’s going to cough-up. So, there’s something to click – I haven’t worked out how to get the JPEG to be a clicking linky thingy, so I’m keeping it simple and just having a “click here” link underneath the Mind logo.
But thanks Judith, Andrew and Brenda – it’s all gratefully received and appreciated – you are allowed a brief moment of smugness, and even a bit of gruntleness. 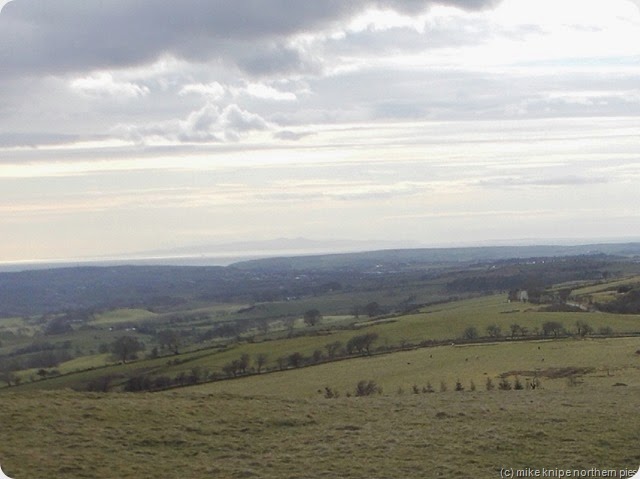 You can see the Isle of man from Kelton fell

click here to donate some of your precious  spondoolies
Posted by Mike Knipe at 11:33

That one sounds a wee bit complicated Mike. Nice one though.Bet Bruno was chuffed at his bagging yet more tops!!!???

Kelton Fell cumbria to Kelton Fell Durham, now that could be a good route.

Dawn - I just made it ssound complicated... Bruno's not saying much at the mo, he's got a dentastick.
Alan - I didn't know there was a Co Durham kelton Fell! I could have saved 80 miles...
Beetroot makes me shudder, JJ. Red cabbage leaves similar stains on white bread, though, but tastes lovely. It wasn't real Lancashire cheese, it was made in Sunderland for the North-east Co-op.

Thank you for the thank you. I hope the clicky thing draws in the donors.
I did three Synges at the start of the year. They were wet, boggy and windy with zero visibility - but a tick is a tick to some people!

Never mind Lancashire cheese (husband no.1 was from Lancashire) what about a nice bit of Wensleydale with cranberries? Dixie says that's real class.

I think the names of the places you hike are too remarkable to have been made up—and I do love them. I was very disappointed that you didn't save part of your lunch to eat later on: there's something appropriate about eating a banana on Banna fell. I would have taken one just to eat when there.
You can click on a picture once you've put it in the post (when editing it) and this little menu comes up usually under it and has options for adding a link, in case you want to make the MIND image the clicky thing.

Kelton Fell is near Balderhead reservoir and has a hill named Kelton too. But i’m sure you can google it.