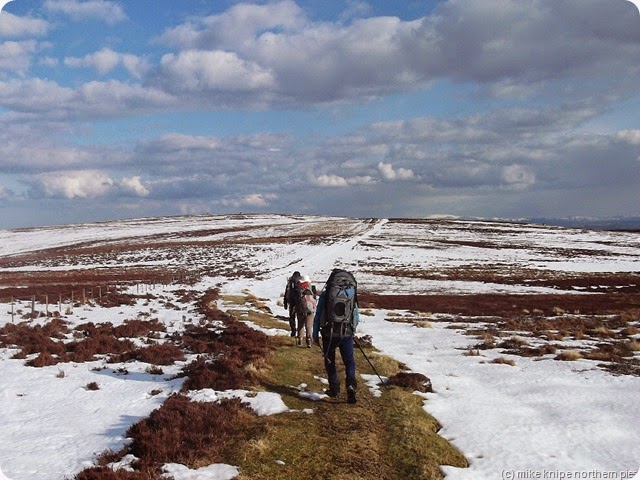 Its quite a long way from Pietowers to Aviemore, specially when you’ve got to visit a couple of train stations on the way to collect travelling bloggers – in this case, Carlisle for Judith and Aviemore for Alan and JJ.
We eventually arrived at the foot of Glen Mazeran  by late lunchtime,  and orf we jolly well went.
The idea for the trip was primarily to have a little gear shakedown for those bloggers involved in this year’s TGO Chally and to have a nice jolly for those of us who weren’t and to check out the cafe akto camping spot in the very lovely Glen Mazeran. 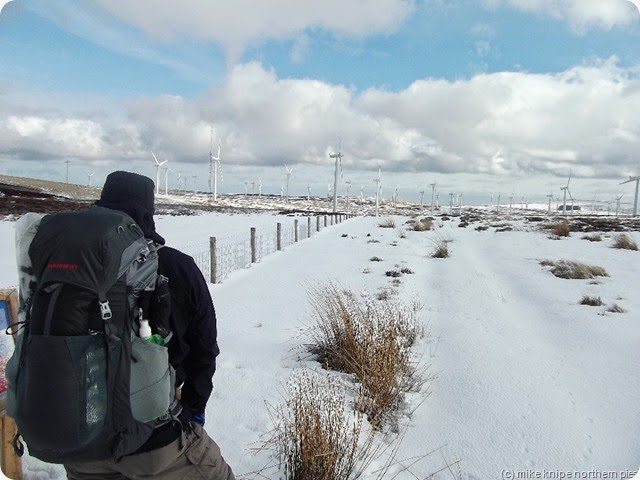 We didn’t go too far on the first day – just as far as the new estate tracks at the head of the glen where we found a young ghillie (Gillette?) apparently bulldozing earth and rocks into the burn. He seemed friendly enough.  Here we met the first of the sloppy wet snow, but found a dry and flat patch next to the Allt Feith an Sgianair (burn of the cheap holiday flight) just big enough for four  small tents and just cosy enough to hear the snoring. 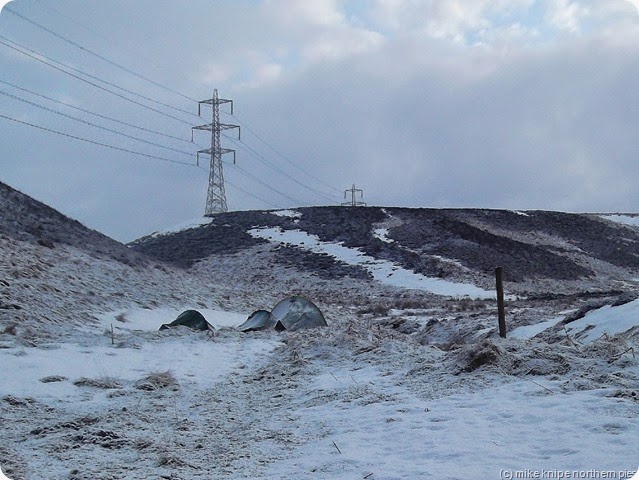 During the night it snowed a bit more and we woke to frozen tents and water bags, and toes, frankly. Getting ready to go was a long and drawn-out business but by ten o’clock (yes, I know...late...) we were bashing our way through the deep and soft white mush of thawing snow pack.
It was hard going, but we headed doggedly (doglessly in my case..) for the swishing turbine blades on the hilltop. Here we found easier going on the huge motorway-width maintenance roads – quite a boon, as it happened and we managed to cover a couple of miles in about half an hour – four times faster than our previous roadless rate. We bashed on through the swishings not bothering now with looking at the map since the whole landscape was nothing like it was supposed to be according to Ordnance Survey. Its remarkable how much this area has changed even since last year. 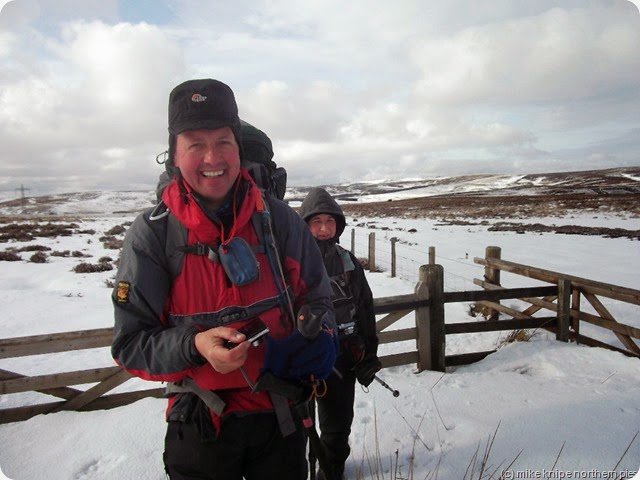 The we came across a sign in red print which encouraged us to follow a “right of way” through the maze. A brief conference was held and we decided, on balance to use the maintenance roads, so we headed off in the rough direction of Beinn Acha Braghad, the only Scottish hill to be named after a Mesopotamian city. (you may need to think about this one...)
Then, quite suddenly, a white van shuddered to a halt in a cloud of carboniferous quarry-bottom dust and six or seven burly eye-shaded slapheads – not a scalp hair between them - fell out of the back of the van. 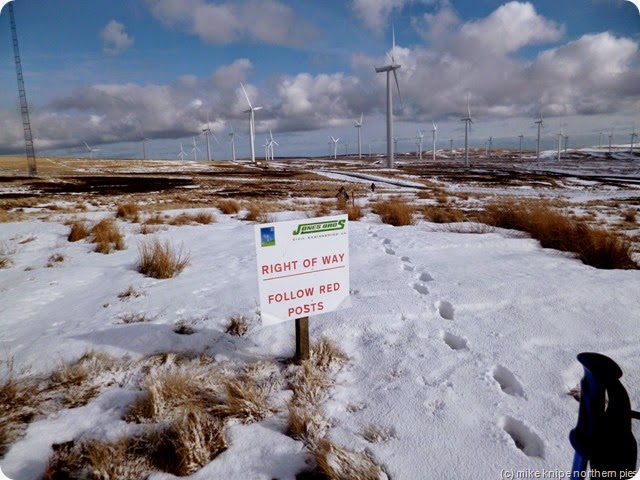 Then , in an East-European accent, we were asked if we needed any help with our navigation. They were quite polite and , indeed, very fair, pointing out where we’d gone wrong and, indeed, where we wanted to go. They were quite assertive about where we wanted to go. I thought they were probably Russians, although Oleg, the apparent captain of our band of helpers, claimed to be from Stornoway.
And so, following a brief search of the contents of our rucksacks as a health and safety measure,  and a name-check to a radio HQ thingy somewhere, we were shown how to find our next camping spot – a lovely, if chilly little corrie alongside the Caochan Mo Chreach, overlooked by a rather handsome line of electricity pylons (not on our maps either, by the way) 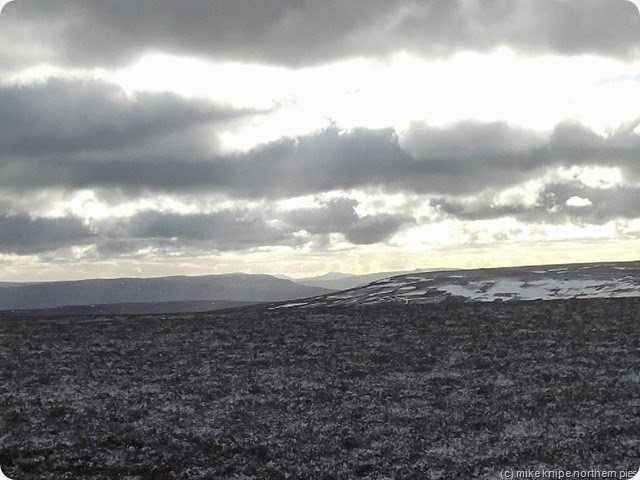 Part two tomorrow, in which we reveal the name of this unmapped wind farm and it’s helpful signage and staff. My advice is to use the maintenance roads unless the Russians spot you, then just pretend that you’re lost but one of the problems of passing through these mountains for TGO challengers – and others, too, which lies in it’s wildness and lack of features, has been solved and the new roads will take you right through the middle quickly and without any fuss and none of that navigating nonsense.
Other bloggers may well be writing about this adventure and as soon as they do, links will appear here (alan) and here (judith) and, here (John), or possibly somewhere else...

This is a somewhat strange little adventure, complete with camping under pylons and walking through mazes in the midst of huge wind turbines and also having Eastern Europeans come out and see if you're not trying to take some of their generated energy for free in your pockets. Those windfarms are a good way to kill lots of birds, which is why I'm not fussy about them being around. I like my birds flying about, not lying under turbines on their backs in a heap.
A young ghillie doesn't have a different name; though a female ghillie is called a ghilliette, so you were almost right, except this one was a young man.

I enjoyed that Mike except the red paint.

Having done Russian O-level many years ago, I could possibly have been of use to you there.

Aye, them russian buggers certainly put the wind-up me.

Which windfarm is this Mike? I know that Drumnaglass is going to be constructed but though that they have not started putiing up the turbines yet. One of your nice maps would be helpful as visiting the area of easter and it would be good to avoid. Ta!

Well, James, all I can say is that this one isn't on any maps and doesn't officially exist. Its a kind of Brig O' Doon type of windfarm that only appears at a certain time of year. (Note the date of JJ's Judith's, Alan's and my blog reports)) If I told you , you'd have to deal with Oleg and his pals... and you wouldn't want that.