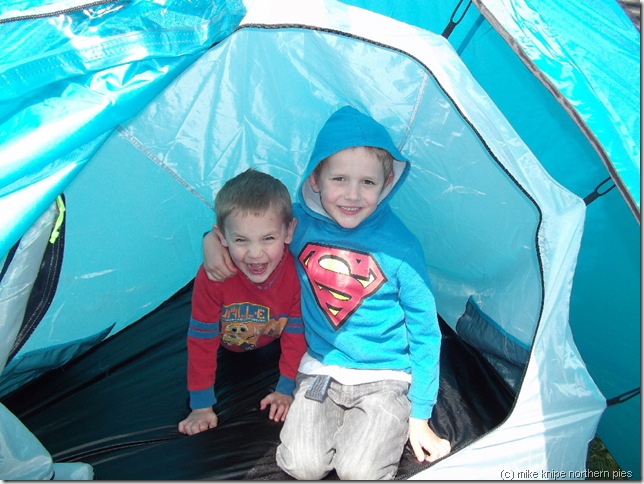 I got an email the other day which, basically, to cut to the chase, as they say all the time on Jeremy Kyle just before they do the all-important lie detector results, asked me if I would like to review a tent. I saud I could do two tents if they wanted.

And so, this morning, two tents arrived. We packed some butties and bananas and strong coffee and went off to Demesne Mill pickernicking place (aka Wolsingham Pools in Knipe Family Nomenclature) to put them up and have a look. 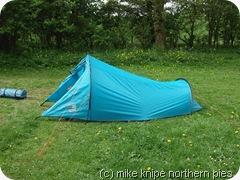 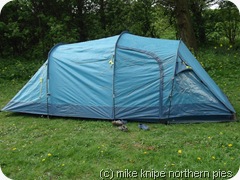 Tent 1 is a two man Karrimor Ultralite Explorer and tent 2 is a Eurohike Primevera 3 – a three man tent.

The grandkids liked tried both briefly and liked the big one the best.

The big one fought bravely not to be erected, but persistence and a set of guidelines prevailed and it had a brief outing. 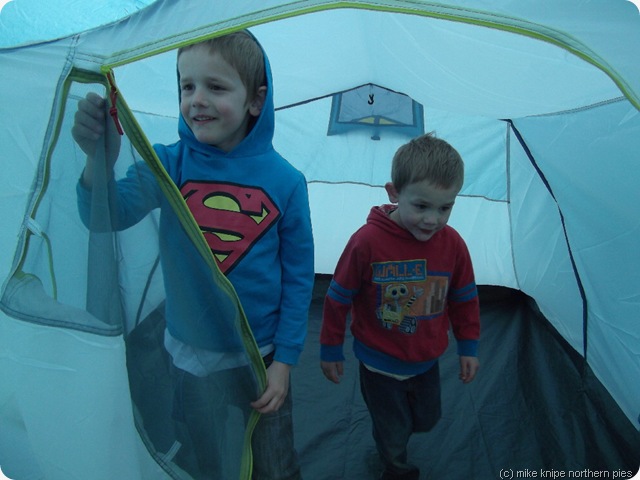 The backpacking tent will be used for “Cafe Akto” – a couple of temporary Munro-bagging sites just to the East of Loch Ossian and at Ben Alder Cottage – and, possibly on the site at Montrose. And the Primevera will be used at Tarfside. Its big enough to have a party inside, as it happens…  I’ll likely use it in Wales in the summer as a campsite tent. Plenty of room, see?

After this, I’ll do some honest reviews. I have some early thoughts, but its much twirly to say anything really, so I won’t.

Except to say that whilst I quite liked the Primevera, I can’t get it back in it’s bag.

Kids have gone off to see Fireman Sam just now, so I may take the opportunity to have a brief snooze…

...just rubbing it in now. I was so frustrated at not being able to get the telly working (hubby having just gone away overnight so no 'man that can' available) I couldn't nod off! Bah.

Ah yes, yeractual and Louise - an excellent nap. I was vaguely aware of the phone ringing - prolly a marketing call (they always get my name wrong, so I can honestly say that whoever they're asking for isn't here)
There's always the radio, Louise - or does that not really do the job?
Radio 4??

You can tell them that I will review a couple of tents for them too!

Stangely, no, the radio doesn't do it. It's the familiarty of the bbc news, 'cos I'm listening to it really, and I know just when to make an effort to 'wake up', d'ya see?

Hmm - You're going to have to buy a new telly, Louise..
Or, maybe you can get the TV on your computer..

The phone ringing was me, warning you to get to the pub quick and order me a whiskey as we were on our way back with the children.

Nice one Mike. One to sleep in and one to party in.
Leave the little ones in the pub though. Remember the snoring and singing may scare them.

Normally, Rachel, when the phone rings when I'm snoozing , it's an Indian chap who gets my name wrong and claims to be called "Simon" You'd think he give it up as a bad job...
Alan - This is the last time the sprogs get into the party tent. This one is going to Tarfside. I'm considering doing B&B, but without either of the B's