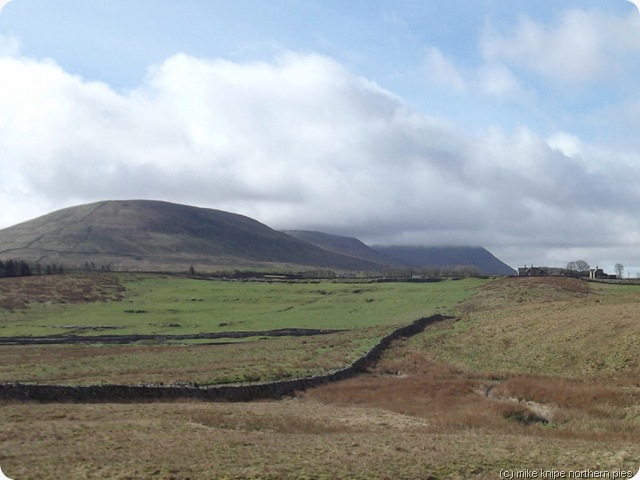 Bright readers will already have noted that the title of today’s blog post includes the words “Dent Station” and not just “Dent”. This is because Dent Station is absolutely miles from Dent. They should have called it Dent Head or Dentdale… 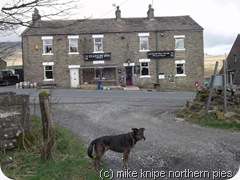 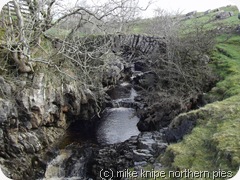 Anyway, as the weathergirl declared that  today would be a sunny old day, following a chilly old morning with a stiff old breeze blowing a substantial windchill up an old geezer’s old trouser legs, I suggested to the dog that we could go for a walk instead of doing any of the other things on the “list of things to do this week”. I’ll probably do some of them tomorrow.

So we went to Dent Station and caught the 10:07 to Ribblehead and walked back again. 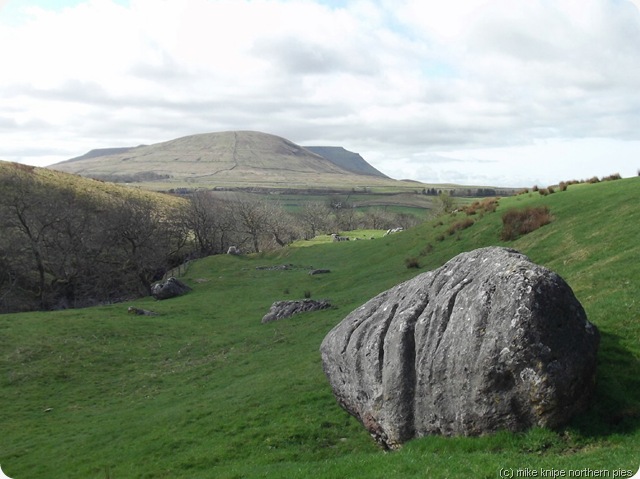 We had a little visit to Thorns Gill, mainly because its appeared on other people’s blogs (e.g. Dan from Earby) and I’ve never been. so we went. I liked it. Its a good place to be on a hot summer day, I should expect. 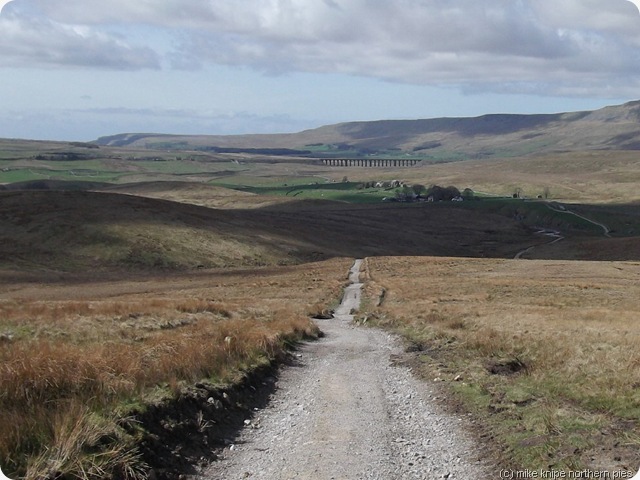 We completed the loop and returned to the road, mainly to find the start of the Roman road to Bainbridge. There’s a more direct route from Gearstones to Wold fell, but why make things simple? So we marched up the roman road three abreast, waving our swords and saying “hail” and stuff like that. 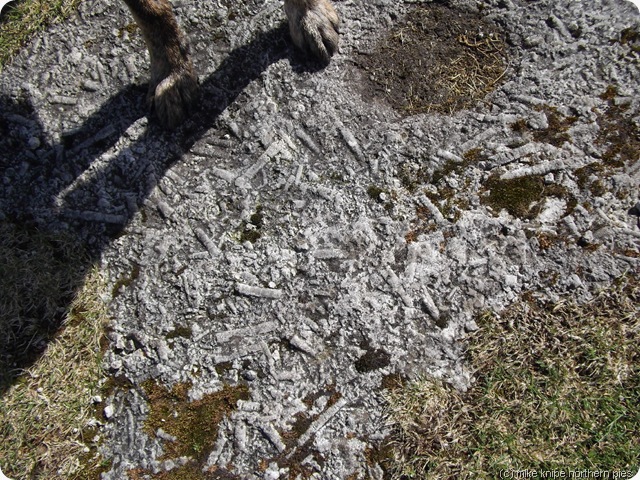 The problem with this walk so far (apart from the stupid amount of road walking at the start) (and the strange off-road loop) is that every time I took a photo it had Ingleborough in it. Ingleborough draws the attention unfairly. other attractions such as the viaduct or the pretty traffic lights at the road works, or the cute and potentially delicious new born lambs don’t get a look in. Its all Ingleborough, Ingleborough, Ingleborough.  Anyway, peering at the ground, I noticed that the path was made up entirely of fossils and dog’s feet.

So, by way of a change, I got lost. Y’see, the OS have got this path from Kidhow Gate which ends at the old boundary between the West and North ridings of Yorkshire. As the path goes through the North, its not a right of way. Then it pops back into West, where its legal again. The problem with it is, of course, that its a complete figment of a fevered imagination. There’s a very old wall marking the boundary – probably a little more than 200 years old, i should expect. And there’s no crossing point. So I didn;t cross. I followed the old county boundary till I was forced to hop over a wall and.. just a little way down the hill… I found a path. A new path. A new path with “bridleway” signs. I followed it all the way back to Kidhow Gate. Bugger. I followed it downhill again past Jam Sike ( a small beck), down to the Dent road. 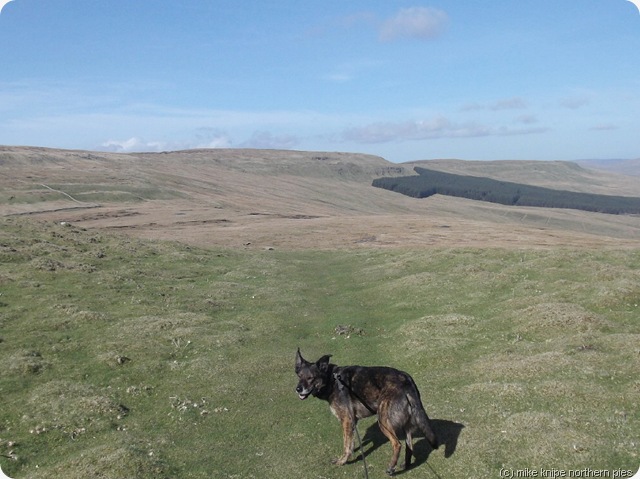 Then, along the road a bit, I expected another bridleway that looses its legality at the county boundary, but found a new bridleway, with a new surface, and a continuous line to the top of Arten Gill.  Its all good stuff, but all the maps I’ve seen, including on-line ones don’t have these paths properly mapped. 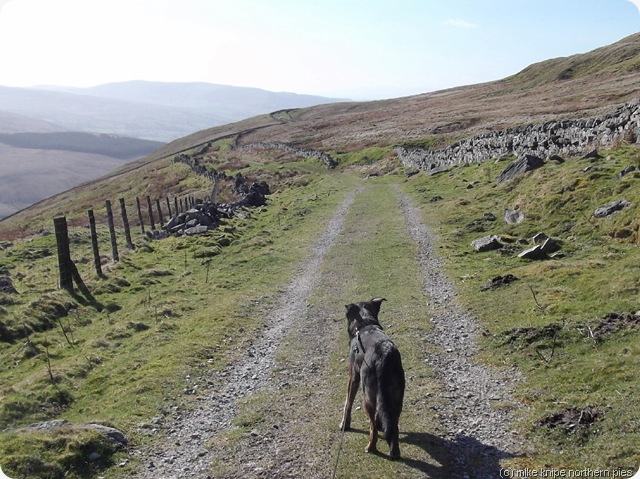 The walk along the Cross Wold lane which contours across Gt Knoutberry is a sheer  high-level delight on soft and springy turf with extraordinary views of Dentdale and .. Ingleborough… 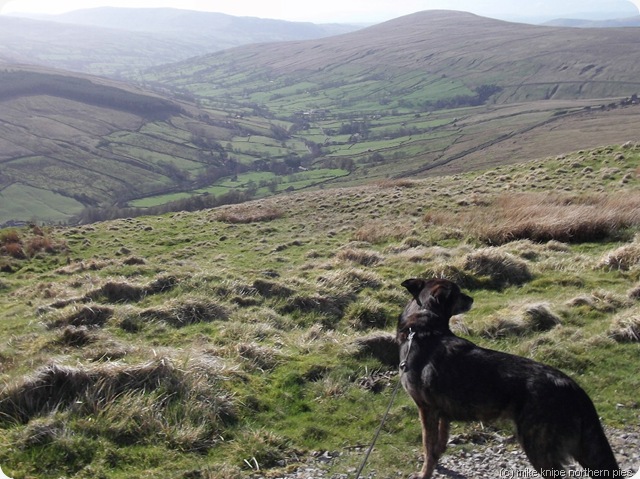 We finished after seven hours of Dales fun.  We did 16 miles and 2100 feet of uphill. the map doesn’t show the random wanderings, but concentrates on the comfortable route for people who don’t like climbing walls. 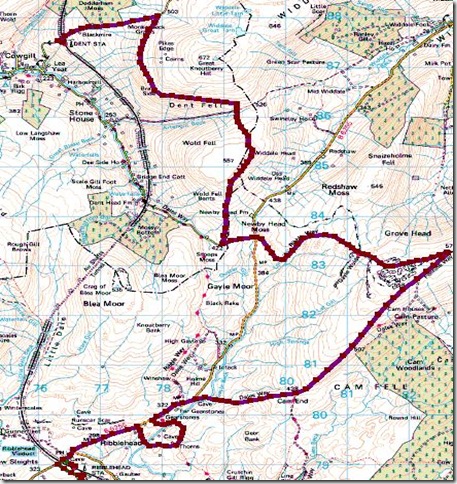 Looks like my kind of walk, great stuff.
Rich

I so Love your walks. I get to see places I wouldn't get the chance otherwise (MS for last 5yrs which has called a sudden halt to my wanderings in the wild and beyond).
So Thanks.
Alison.

Sounds good! I've walked a bit round there but managed to avoid most of those paths so far. I must go again and try harder:)

the new bridleway is part of the 'Pennine Bridleway' - not officially open yet in the YDNP.

I am as ever jealous, and another great walk Mike.
But you have too much free time on your hands, can I borrow some from you?

All good, clean fun, Richard. Alison - Nice comment - I'll bear in mind the vicarious experience - it might even improve my writing.
Jules - Don't try the path with the missing link, cos its not there...
Balhameagle - I guessed it was the PBW. they're spending lots of money doing it up - new gates, surfacing, drains, new rights of way even.. I hope the horseriders will use it.
Andrew (AKWW) My freedom is the result of much sacrifice and an NHS final salary pension. Shudder been a nurse, lad!

well for once it was nice to get somewhere and not spot a blue "Mike Knipe Was Ear" sign or was that Kilroy ? cheers Danny

If you stand too long in the one place, fossilised dog feet is one thing but there is nothing wrong with photographing Ingleborough ..... It'll keep me warm on the hill this year !! ;-)

How do you keep warm with a fossilised dogs foot ?
No! sorry I won't ask
Danny

Managed to do some of them last weekend. It is, as someone else mentioned, part of the new Pennine Bridleway. We did the bit to Arten Gill - looks like it might add something to the already good walking of the area.

When it's complete (if it's completed now funding is threatened/removed) it will run from near Matlock in the Peak District to Byrness in Northumberland, roughly paralleling the PW.