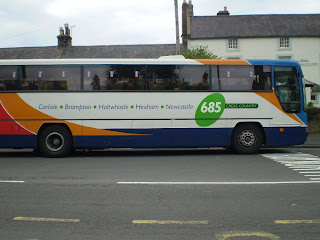 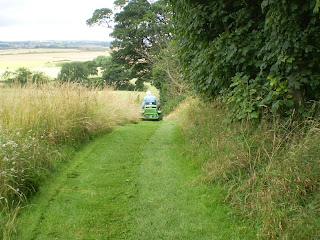 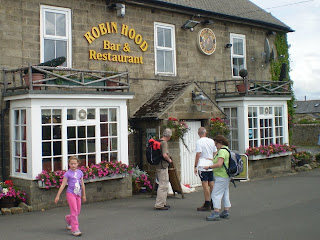 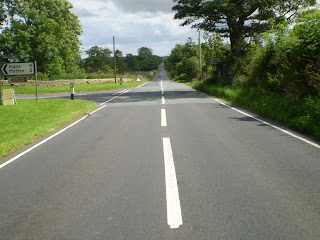 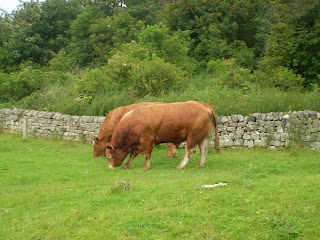 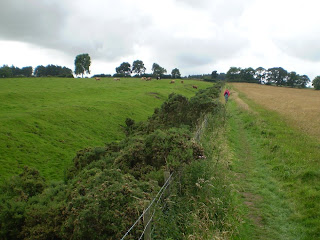 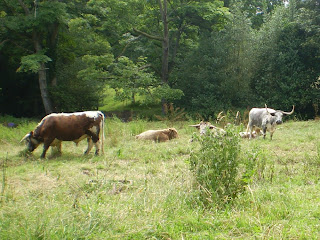 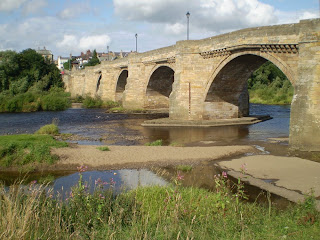 This was day 2 of the Hadrians Wall series. Day 1 isback on 15 July 2009 if anybody wants to refer to that one. (Actually, it was two….)
Anyway, I drove to Corbridge and abandoned the venerable knipemobile in the free car park by the river and caught the 685 bus to Heddon on the Wall (which is where I finished day 1).
The 685 bus is proving to be very useful. I wish I was old enough for a bus pass….
Anyway, I marched manfully off along the road under and beside which lies Hadrian’s Wall itself. There’s not much of it to see – there’s bits of it under a hawthorn hedge – a low wall of square stones. The first part of today was through arable fields of beans, oats and barley. I pinched a few beans…
There were a few other small groups of HW walkers around to make things interesting for, I have to say, this part isn’t the most interesting walking in the world. And it’s noisy too. All day I walked parallel to the B6318, known as “The Military Road”!. There’s a song about it. Its very straight and, you’d be forgiven for thinking that it was a Roman road. But it isn’t. It was built when relations with the naughty Scots just to the North were still potentially a bit shaky and a road from Newcastle (with it’s short sea-borne supply lines to the South) to Carlisle would enable the movement of troops quickly across country to bugger up the plans of any tartan horde moving down the West coast route or investing Carlisle. They built it on top of most of the archaeology. They just didn’t care in those days.
So, in showers light and heavy, I plodded West along a shorn strip of grass. I met a chap on a mowing machine and joked with him by asking how long it takes him to get to Carlisle. “Three weeks” says he. “Then we turn round and come back. Its very enjoyable” His job was to mow a wide strip of grass for the HW walkers. And sure enough, there’s a wide strip of mown grass all the way. Except a few muddy bits.
As always with a slightly dull walk, interest can be had from interacting with other walkers and, as we waited for the Robin Hood pub to open, I discovered that I shared something in common with three other walkers:
Viz:
1) I was born in the same maternity hopital as the first one (Bank hall Maternity Hospital in Burnley)
2) The second one used to live a few hundred metres from Chez Knipe in Crook
3) The third was born in the hospital I used to work at in Bishop Auckland.

It’s a very small world, specially up here in the North east. Luckily, Hadrians Wall is a popular route, so you can always have a chat.
Excitement is also added to the walk at the Western end of the section by the frisky suckler cattle. There's a lot of beef around here.

After the pub, I lunched under a gooseberry tree, fed the babies and picked two dozen ripe and juicy gooseberries, which I scoffed over the next few miles.

I also happened upon the “Ramblers Rest” tea van which has a little garden and chairs and a pet blackbird – and a friendly chat over a cuppa and some ginger cake.

The route does get a bit better as it goes West, although its almost always noisy and any archaeology is difficult to see. After the Port Gate ( now a roundabout) where Dere Street headed off towards Edinburgh, the walk follows the edge of the vallum, which is the defence system against attacks or crossings of the wall from the South. At milecastle 23b, I turned South and followed the lanes back to Corbridge. (There's a mile castle every mile, and they're all numbered...)

Easy walking and just a few contours. I covered another 11 miles of Hadrians Wall, and 16 miles altogether, with 950 ish feet of uphill. One pint, one cuppa, 26 gooseberries.
The next Hadrians Wall walk is scheduled for 5 August 2009
Posted by Mike Knipe at 21:19

He seemed to think so, Paul. I must admit - it does have it's attractions.....