Legends on the way to Etive 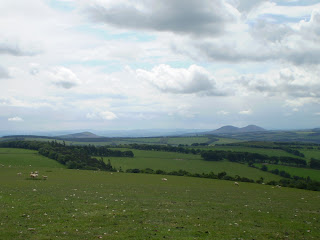 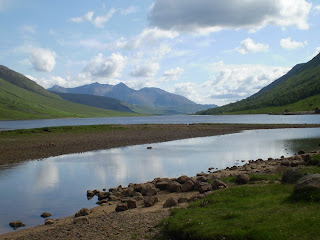 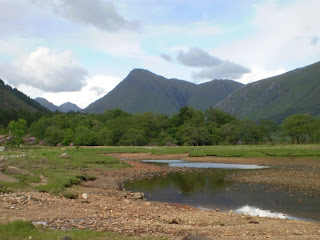 It must have been last Wednesday when I set off for Glen Etive. Whatever it was, it seems a long time ago.
I drove up through the Borders and bagged a little HuMP on the way – a fairly non-descript Boon Hill, quite close to the village of Boon and not too far from Lauder.
The best thing about Boon Hill, apart from the ease of it’s ascent, is the view of the Eildon Hills. The Romans called these hills and the fort at their foot Trimontium. Three Hills, y’see. You can only see two from Boon Hill.
The Eildons are also famous for the legend of Thomas the Rhymer – who, whilst having a bit of a snooze or something beneath a hawthorn tree, was visited by the Queen of Fairies who kidnapped him and made him serve her for seven years, the reward for which was an ability to write poetry. Fair do’s I suppose. Its certainly a warning against dozing off under thorn bushes….
And eventually, I arrived at Glen Etive which, as you can see from the couple of pics, is a spectacularly beautiful place. What you can;lt see is the outrageously high population of vicious and completely mindless midgies who’s only purpose in life is to get a bit of your blood. Most of them die in the process. But they just keep-a-coming.
As we’re on about legends, I ought to mention one Diedre of the Sorrows which has links with Glen Etive – but read a version of the story here http://druidsutterance.net/20060518602/The_Exile_of_the_Sons_of_Usnech_Diedre_of_the_Sorrows
The Glen Etive link isn’t very obvious in the tale here, but there are strong local claims about it.
What isn’t in dispute is the hammering we gave to a bottle of scotch just after Mike arrived. (not me, another Mike….)

Mike was in his camper van and I camped with the midgies close by.

Tales of derring-don't on the local hills follow shortly...

Email ThisBlogThis!Share to TwitterShare to FacebookShare to Pinterest
Labels: Boon Hill, Diedre of the Sorrows, Eildon Hills, Thomas the Rhymer