Great Hameldon - a walk near Burnley 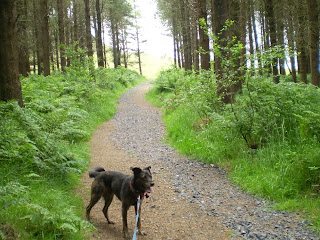 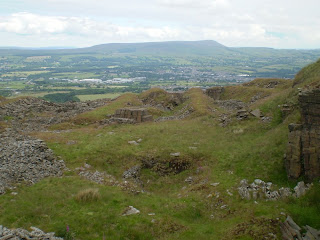 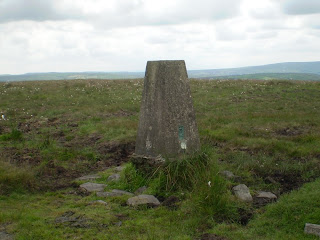 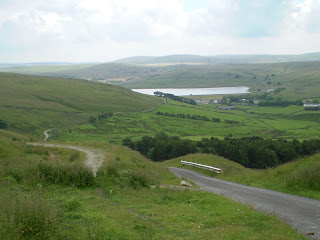 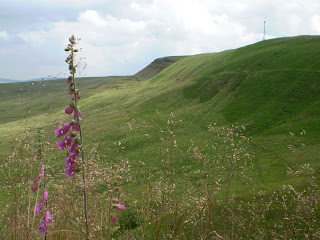 Me and the wife and the dogs trundled off to Halifax Monday afternoon. The purposes of the visit was for Maggie to go with her dad to his out-patients appointment, for me to bag a little HuMP near Burnley and for Tammy, our eldest and smallest dog to throw up all over the back seat of my car. All of these purposes were fulfilled. In the case of Tammy, she managed a double tick, as she threw up all over my back seat, in the cupholder cupboard thingy and on my headband sweaty thing on the way home. Well done Tammy.
As for my HuMP – one Great Hameldon , a 409 metre rounded, grassy, ever-so-slightly soggy hill with a cracking view of east Lancashire, and , in particular, Pendle Hill.
I had originally hoped to meet up with one Yomper there, who’s user name many people may recognise from internet fora. But , in the end, unfortunately he couldn’t make it. I also emailed (albeit at the very last moment) a pal who lives very near to this hill. We haven’t seen each other for years and years but we had a strong friendship at one time, going back to the time when the Beatles were still young (!) and so were we – but there was no response this time. I’m hoping that at some point we can meet again and visit the places we smoked B&H on the moors and put the world to rights. We have to do this before one of us dies. One day…
Anyway, me and superdawg appeared, almost as if by magic, but , in fact, by the miracle of Nissan at a picnic place/car park quite near Hapton, which, in turn is quite near Accrington.
It became clear from the start that this was going to be a “sweaty do” – in the local vernacular. By the time we’d followed the path through the woods and been dumped in a narrow path between barbed wire with six-foot deep nettles and brambles, even my ears were sweating.
We emerged, scratched and almost intact to the road to Accrington and a lovely path through sweaty woodland and onto the grassy and flowery moor and the old quarries which appear to have produced most of the buildings in Burnley. A steep semi-scramble with eyes stinging with forehead-juice and we were on the scarp top where a path beckoned us on.
A little way on, a side path lead off over boggy stuff to the rounded drumlin-like 409 metre top with it’s big view. We lunched. We perspired. Bruno panted. I gave him water from my precious supply. He appeared ungrateful.
And so we went over to Hameldon Hill, a 399 metre top with a trig point and a weather radar station. An easy and attractive path took us back to Hapton and the start.
We dripped and oozed liquids from all skin surfaces. Bruno’s tongue was much longer than a dog’s tongue should be and waved and dripped. He wasn’t specially happy about the heat. Actually, it wasn’t that hot, but I suspect that humidity was very high, judging by the towering black clouds….
We drove back to Halifax with all the windows open.
Just six miles and 1150 (ish) feet of climbing.

I should add that I was born about six miles North of this walk, one branch of my family is local and it does feel, a bit, like home. Even the accents of the people who spoke to me seem a bit comforting (its nice when people talk to you) – but I did notice that many of the homes around the foot of this hill had some big dogs…. Not a good sign….
Posted by Mike Knipe at 19:22

Mike, curiousity has got the better of me, I can't conceal my ignorance any longer - what is a HuMP?
I apologise if you explained this already and I wasn't paying attention!

A HuMP is a big LuMP!
A HuMP (and you're supposed to type it like this - big H, small u, and so on) is a hill with a Hundred Metre Prominence on all sides....
So they stick out a bit.
There's about 3000 of them in the uk. This hill is quite a good one...

Ahhh.
Got you. Like a Marylin but not so pronounced, then.
3000 - won't take long to tick off then! Presumably includes some on private land, several far-flung islands, and a couple of sea-stacks?
Thanks for elucidating Mike.

Same stable as Marilyns - which have 150 metre prominence, which, of course, makes all marilyns HuMPs as well. There are indeed some "awkward" ones!