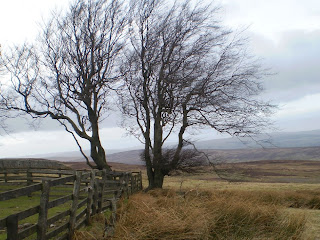 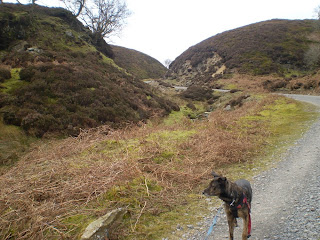 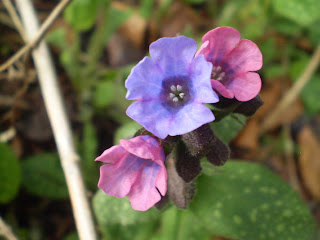 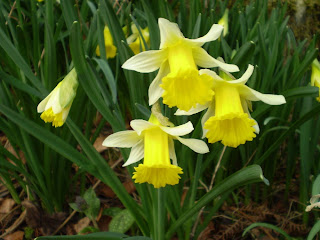 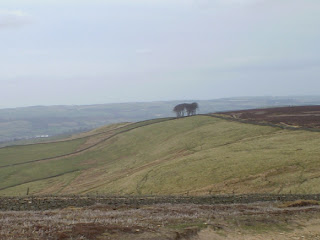 Meanwhile, back at the TGO Challenge training plan (I expect you’re getting bored by TGO stuff by now…. ) – It seems that in March, I should orta do a longer walk than whatever was the longest walk I managed in February.
And so, I consulted my diary of walks and found that last march I walked from Wolsingham to Hamsterley Forest via Doctor’s gate and then up Sharnberry Gill nad back over the moors by Five Pikes and the Elephant Trees.
I consulted the dawg and it was agreed that as neither of us could think of a better one at such short notice – this is what we would do.
So we did.
It’s a steep start, up the road towards Hamsterley and then turning off on a even minorrer road passing St Johns Hall to Doctors gate.
The Daffies were flowering at St Johns Hall. This may, at first glance, seem a trivial point but no ! I said No!
Y’see your St Johns Hall once belonmged to the Backhouse family. These peeps were rich magnates. This means that bits of metal adhered to them. The bits of metal in question in this case being money. They had lots of it and they founded banks with it and lent money to other Victorians to build things with – like railways and bridges and mines and factories. One William Backhouse spent some time at St Johns Hall breeding daffodils. Hence the daffies were out at St Johns Hall. I don’t think these were special ones, though. Somebody would have pinched special ones.
There was also a very pretty patch of what appears to be Lungwort – according to my Wild Flower key which cost me twenty quid, so it must be right. I only mention these things because it’s obviously spring.
Incidentally, speaking of banks, I’ve just realised that HBOS went nips up almost immediately after I’d finished paying my mortgage. Food for thought, there. I’m sure you will agree.
Anyway, we plodded on over (or is it through?) Doctor’s gate – so called because that’s the way the doctor came (I think) – and over the flat moor and down into Hamsterley Forest. This forest is remarkably similar to Fetterresso Forest which is why its good for training. Similar in the way its full of trees.
I lunched briefly whilst Bruno destroyed some sticks (lots of sticks in H. Forest) – and then up onto the moors via Sharnberry Gill. Sharnberry is a very young feature, geologically – being only 12 to 13000 years old. Which is young. It is, in fact, the overflow from a very deep and large lake caused by the bunging up of Teesdale with an enormous wall of ice. Thus it was global warming that caused enormous torrents of water to gouge out this gully over the watershed. Victorian leadminers did a bit more damage. Global cooling over the last 7000 years has caused it to fill in a bit with sphagnum and peat and other sloppy things.
I always get the next bit of moor between the road and an estate track near Pawlaw Pike wrong. I just can’t find the path. Its easier if you go the other way. The sign says dogs are banned from this bit of open access. This doesn’t apply on public footpaths, which is what we’re trying to follow. But if they want me and superdawg to follow the path accurately, they should put some waymarker poles in. Otherwise we just trespass. Take me to court, I don’t care.
After this, its downhill for lots and lots of miles on good paths, tracks and roads. Its a romp. We pass the elephant trees. (see a previous posting) and a chap mending the stone wall.
We finish. We go home. We (That is I) drink tea. We fall asleep.
We have walked 18 and a bit miles and climbed 2300 feet.
It wasn’t really very difficult
We are on track
Posted by Mike Knipe at 21:13

Love the word "trespass" - something we thankfully don't have to know the meaning of up here. Our license to rampage across anyone's land is one of our great joys and for the thinking person a great responsibility. Long may it continue.

I noticed that your dog control legislation is also a lot tighter -far more prescriptive. We have the wonderful phrase "close control" which would be a cracker to define in a court of law!!!

Grrrrr, don't get me started Fatdog - I'll be having a rant about English acess legislation.
This, incidentally also allows an eleven month a year closure on one bit on North Pennines.... grrrrrr......Ooooooo, i'm so annoyed.
This is me going to the offy by the way...

How many "r's" are there in grrrrrrr - and how come Scottish grouse and "ground nesting fck*****ng birds" are so much more resilient up there in Alba than English ones. Eh? C'mon?? Eh? Put up yer dookes....
If they're so bothered about wildlife, how come they slaughter so much of it eh?
Ooooooh... where's me blood pressure tablets?