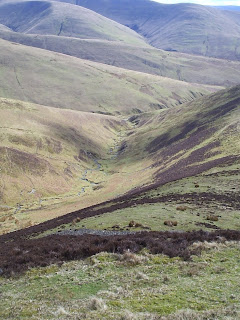 I seem to be having trouble doing what I'm supposed to be doing just now. What I'm supposed to be doing is either lolling around snoozing on the sofa or marching manfully and dogfully over the fells.
After the great response to my plea for advice on stoves and sacks and sleeping bags, yesterday, I decided that a trip to Durham would be in order. Unfortunately my car was desperately ill in the garage and just sat there mournfully pleading with me to save myself and go on without it.
Obviously, I couln't leave it there , so I bought it a new battery. After some fiddling with spanners and a bit of ripping away at some rusty things, I got the new one in and set off, only to be faced with a horrible noise coming from the front brakes. Its booked in to the car hospital tommorrow for an emergency operation. In the meantime, I'm supposed to be. going to Arkengarthdale for a backpackers club weekend.
In the other meantime, various landlording business things have got me hanging around today for a gas fitter and an electrician, and I have to do stuff at the estate agents.
The plans are gannin aglae. I'm not supposed to have a job. I'm supposed to be larking about.
In the yet another meantime - big thanks to everybody who offerred advice - it was all good - to such an extent that I'm now feeling a bit confused by all of the options. I have to make some decisions now. I've decided to go to Keswick when the car's fixed and wander around feeling up sleeping bags and talking about stoves to young lads with spots. But first, I need to really analyse what peeps have said.
And finally - in the World of Seamus Plug (Shameless Plug was somebody's sister in the Bash Street Kids) - the March edition of the Howgills Diary is now appearing in the very fablious Doodlecat. See it here... no , there on http://www.doodlecat.com/

Hi Mike'
If you go to Keswick make sure you go to Winwood Outdoor as they stock some very lightweight cooking kit,well worth a look.

Cheers Graham - another note for the notebook. I wuz wondering about one of those new Primus ETA stove/pan setup - but it depends on whether or not it takes other canisters as well as the primus ones. My current Primus thingibar like a pocket rocket type of thing does.

Hi Mike, just a note to say I've enjoyed reading your blog today, kept me very entertained, although I should get down to some work I suppose.
Also enjoyed your account of TGOC on Doodlecat, great sense of humour, cheered me up no end.

Hi Mike,
If you're having landlord-type esate agent trouble in Durham, you could try Cathedral Lettings. I've found them way better than the estate agents.
regards
Charles

Hi Mike
Oh, I so know what you mean about what you should be doing. I should be getting out a lot more than I am. Thankfully my car is fine; it's me that's had the lurgy TWICE in different forms, then there's work and family, and ... I snuck out today. I'll sneak out tomorrow too if I can.

Sorry for the delay in publishing your comments girls and boys - I been camping, see? I managed to get out. car fixed, estate agents fulfilled, wife informed.....
Anyway, thanks Paul -always nice when somebody says something nice (they don't get published otherwise!)
I'm just having a whinge Charles - the estate agents are fine. They're quite friendly, too. Its just that I occasionally have to make an effort (like taking 52 digital images of bedrooms and light fittings, getting in electricians and plumbers and joiners........)
Shame about the lurgy Diane - I've not had mine yet. I'm waiting for the better weather, I think....
Anyway, just been out, so I feel another bit of blogging coming on...