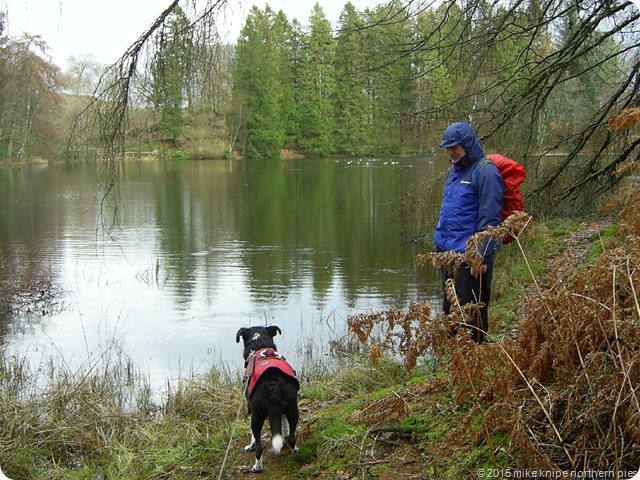 A week or so ago,me and The Bro arranged to have a walk somewhere in the South Lakes, and, in view of the general lack of daylight, I identified four likely and unbagged Tumps not too far from Kendal as targets. In the meantime there was a visit from Desmond so a walk seemed unlikely for a while… but I set off anyway. 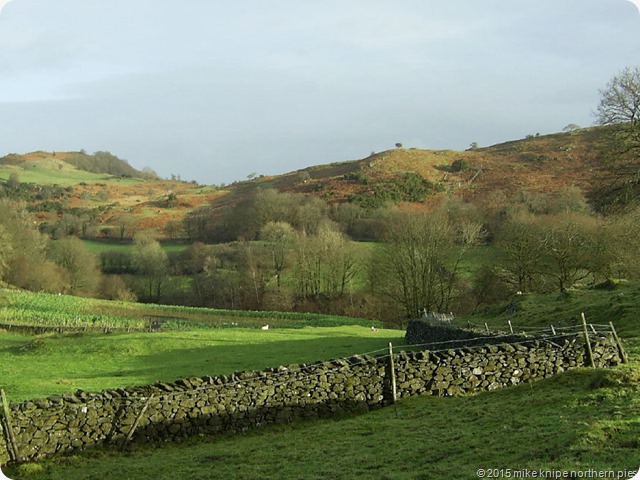 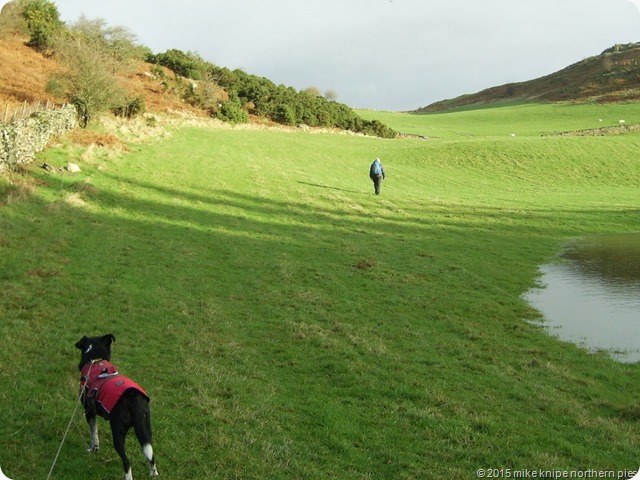 As it happened, the road to Windermere and then South-East from Windermere was open and so, we parked in the little car park opposite Winster Holy Trinity Church (don’t try this on Sundays, folks) and wandered off along soggy paths and lanes towards Hubbersty Head and then Northwards to the foothills of one Scott How, the 169 metre summit being achieved only after mounting some barbed wire, followed by violent and unfriendly brambles and clinging, but dead bracken. Once on the top, we noticed that there was a higher top on the other side of the wall, which we duly bagged after an awkward scramble over an impending rusty gate. (Had we checked the hill bagging website we would have already known that this other top was 2 metres higher) 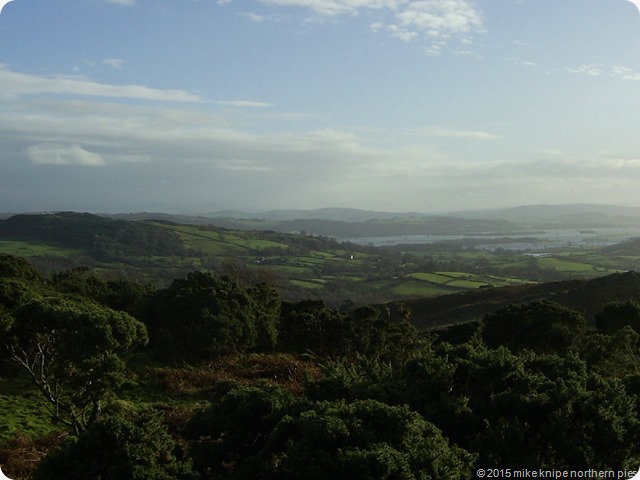 This involved a short but friendly trespass, a derelict gate and some rough and, in places, soggy moorland. Cat Crag 186m is a rocky tor with a nice view and some friendly walls behind which to shelter whilst seriously damaging a turkey dinner pasty wot I got in Durham covered market the day before. Lucky dozed off. It started raining, quite heavily, so we wandered down the hill and through the trees to Knipe Tarn where we gazed at some ducks for a while. Then it stopped raining. Yes folks, there is a Knipe Tarn. 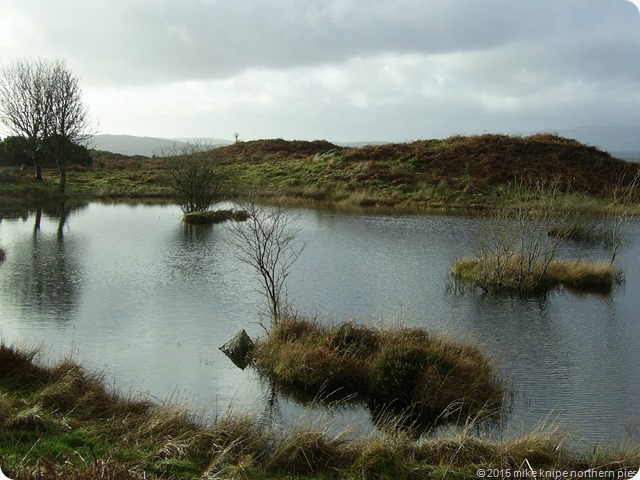 Top #4 was to be Undermillbeck Common 187m. This was to be a bit awkward.  We gained access to the fell from a track to the South and followed a wall with a high mesh fence on the top. The summit was on the other side and, there being no gates or stiles, we had to teeter over this whilst not collapsing the delicate dry stone wall.

This was OK, but, after summiting , we had to recross this obstacle once again, just next to a floating bog defended by more barbed wire.

Capple Barrow which achieves the dizzy altitude of 196m was much easier and defended only by a gate with a “No Footpath” sign on it. We knew that already, obviously, so this information was excess to our requirements and whilst we made a mental note, we did nothing about it.  We did note that the grass around Capplebarrow was very lush and green and would make fine spring grazing for lambing time. The top also has a fine view of Windermere golf course. 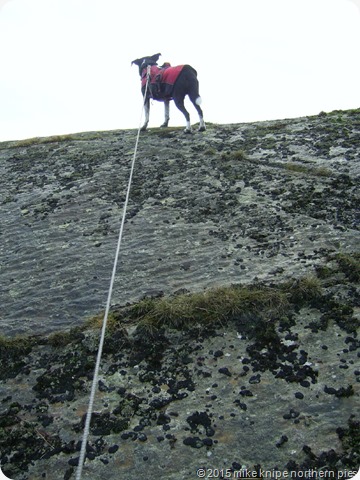 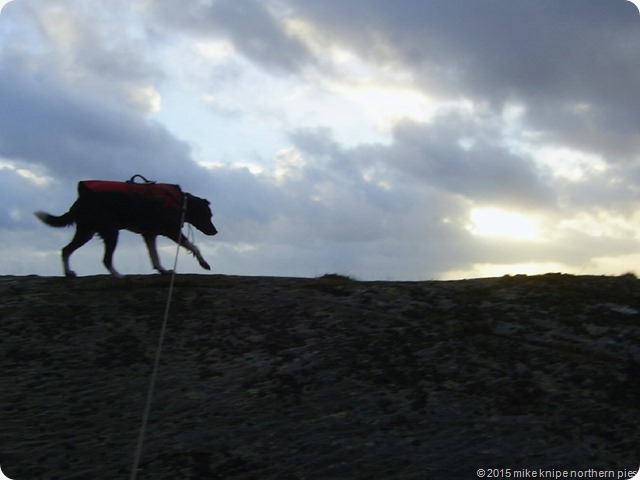 Returning to the gate, we progressed over rough and soggy  patchy woodland/ moorland (quite beautiful, actually). Lucky celebrated by putting up a new route on a rocky slab and we emerged on the main road not too much later. It’s sad to note that he’s a much better climber than I am now. (Although I was never much good)

And that was that. 8 miles and four tops Tumped. Note that none of the summits gained were very high at all and those hill-goers who are even more decrepit than those who seek to collect Wainwright’s Outlying Fells may well wish to consider Cumbrian Hills like these as they sink into the final stages of decrepitude. In fact, senility could well be a useful excuse if discovered doing all that trespassing,  whilst being rescued from impalement on a barbed wire fence or being winched out of one of the sucking bogs.

We avoided any serious flooded, apart from the drive back through the Lyth Valley which was underwater, except for the main road, which wasn’t. 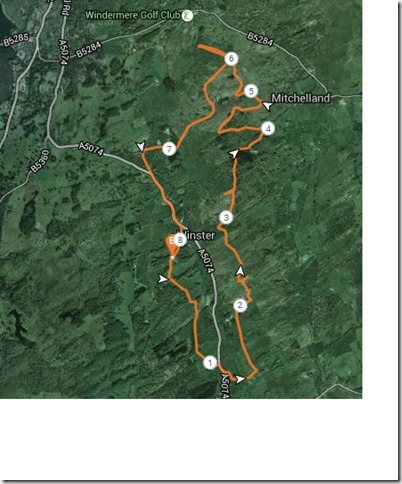 You are intrepid, you Knipes!
Thank you very much for the landscape picture that shows two strands of wire running above a stone wall. I've often thought of doing something similar here, but have never seen it done or even heard of it, and wasn't sure it would be worth trying.

That looks a lovely walk. Reminders of the Knipe dynasty seem to turn up in all sorts of places???

Some rather nifty looking paw work there from Lucky.