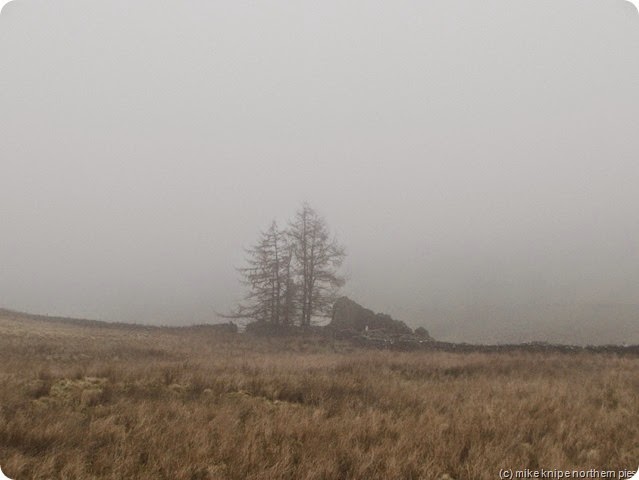 You’d have thought that with a name like “Bluecaster”, there’d be a roman fort or something – but no, apparently not. There is, however a roman road running along it’s Eastern edge and me and the pooch used it for a short distance to get a purchase on this obscure and boggy hillock.

And it was foggy, too, so we made the most of it by making a pig’s ear of a bit of navigation. But eventually, we found the top by using  a traditional Yorkshire Dales navigational technique – that of walking at right angles to the contours, or “uphill” as it’s known in the navigator’s dictionary of navigational wotsits. 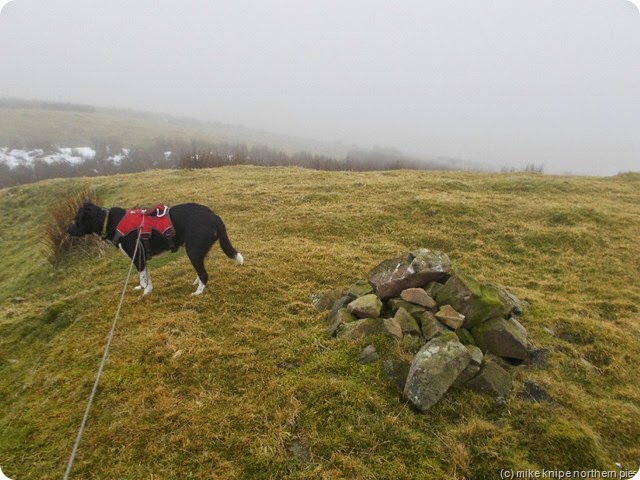 This proved effective and soon a diminutive cairn loomed, as best it could, out of the gloom. Lucky was unimpressed and ate the last bit of snow on the top. 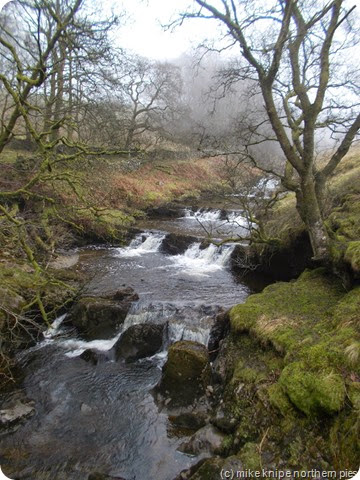 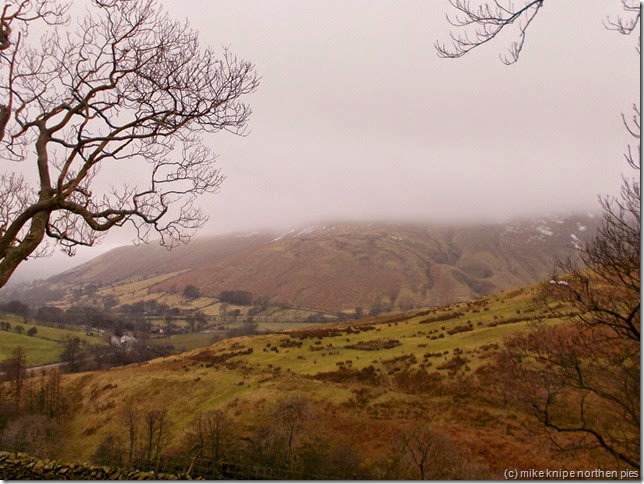 So, we walked North, intending to have a look at Uldale, as opposed to going up on the tops on Baugh Fell, where it seemed unlikely that there’d be much of a view. The gloom, in fact, got a bit gloomier. So, we had a small potter around Uldale’s deep gill, which has some rather nice waterfalls, but it was all a bit driech and dribbly today and so, we crossed a footbridge just below Needle House and followed the road back to the Rawthey where a very pleasant rambling path took us back to the start through bits of woodland, Narthwaite farm where Lucky decided to try to dominate a little collie pup until faced with a well-built and very assertive farm collie , which, luckily for Lucky was quite a nice dog and a small ford where Lucky demonstrated his dislike of wet paws by tiptoeing across on stones… 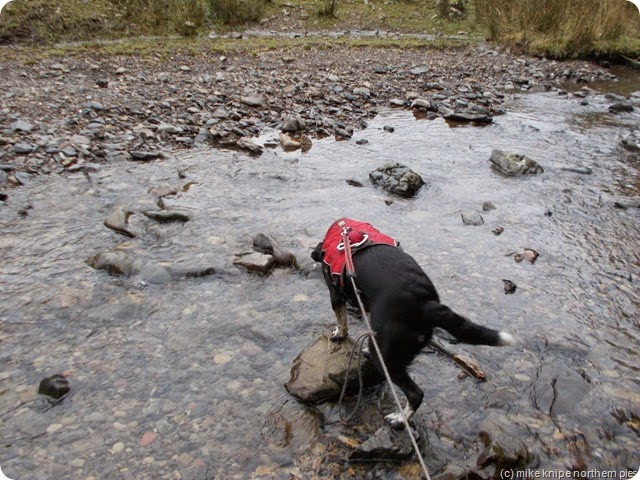 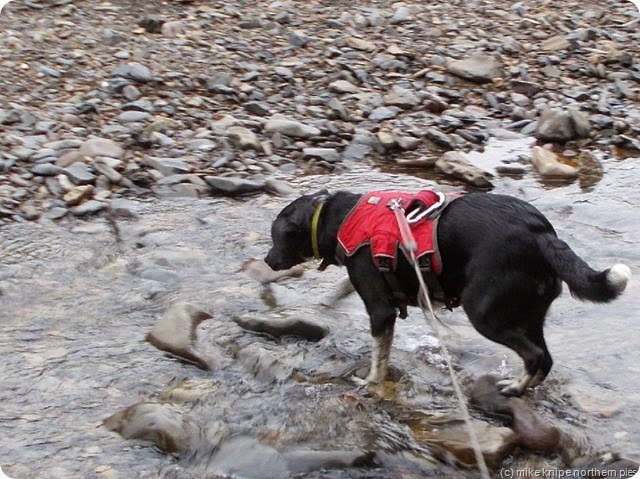 We did 8 miles. Uldale would be much better seen on a nice, warm and sunny summer afternoon rather than a driech and misty February lunchtime. 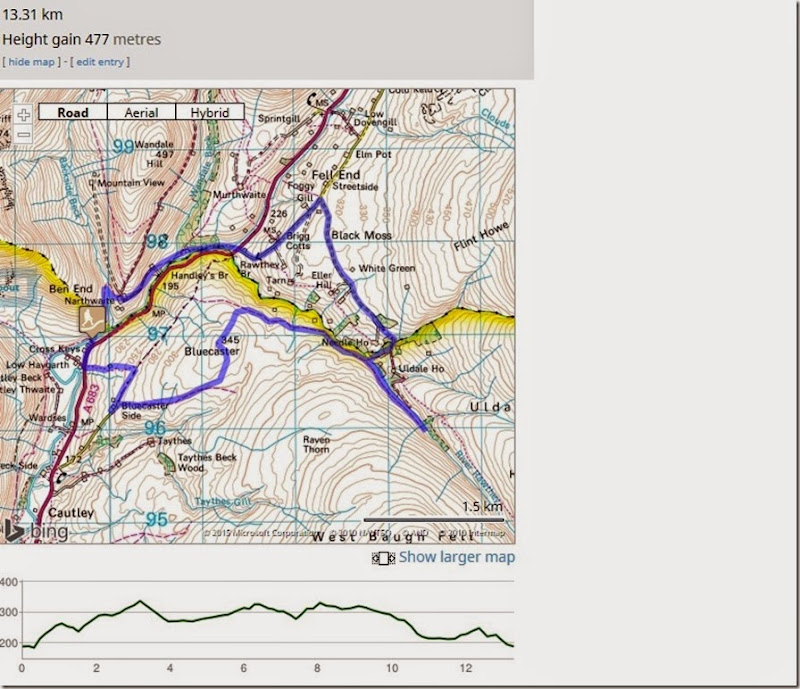 Looks a tad dreich Mike. A pity that all the snow has gone. Good photos.

Good dog, Lucky! My Piper takes the opposite approach, plunging through the muddiest muckiness of any wet area. I think her goal is to turn the back of my car into a garden bed, but I foil her plans with the semi-annual clear out and vacuum.

That there Bluecaster bridleway is on the menu for our next Rough Stuff fellowship ride a week on Sunday!

It certainly looks a bit murkey, but you got some good photos.Lucky looks like he would rather be in front of the fire.Ahh , he has a lovely face.

Deffo driech, Dawn - supposed to brighten up by August, apparently...
Quinn - I clean out my car every Easter whether it needs it or not. Mucky dog goes in, clean dog comes out. I see it as a kind of anti-theft device
Al - Its a roman road! (unles uoi mean the one at Narthwaite, which isn't. Should be muddy fun, I should have thought.
Caz- he's such a lazy git and would prefer to stay in bed all day (I have some sympathy with this as it happens) Once he's out, he's quite enthusiastic, though.

Knew I recognised it! That James fellow and I camped out one night on the top of Baugh Fell, then dropped down to the river Rawthey & doing a bit of that route what you just did.... It was absolutely roasting weather when we were there, too...