Geriatric Slackpacking In The Dales 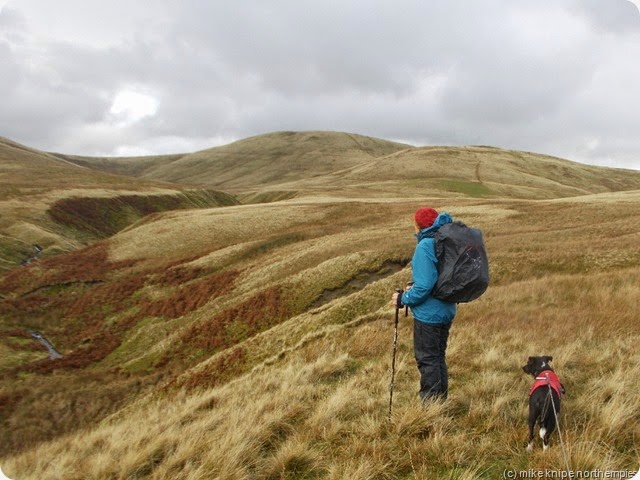 It was never intended, nor going to be an epic of miles and ascent, there being only the vaguest of plans for the next five days… or was it six…?
The plan, basically, was to set off from Kirkby Stephen on the Thursday lunchtime, camp somewhere near High Intake Gill after bagging Birkett Common and make the rest up as we went along but returning promptly sometime on the 18th of November in order to take the knipemobile for it’s appointment at the garage early on the 20th. And that was it. 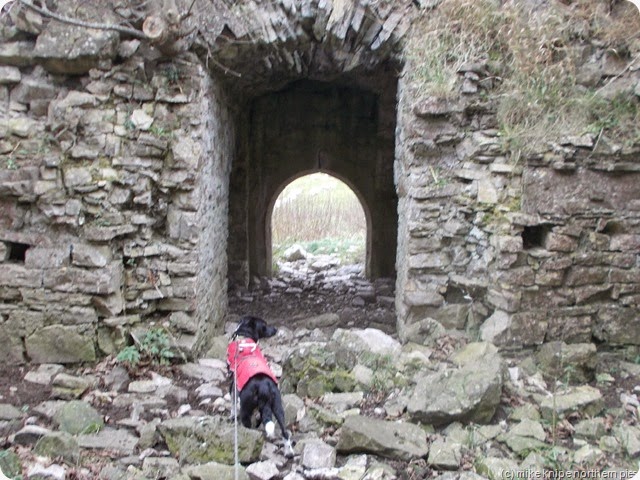 And so, I met Dawn at the train station after abandoning the car outside an empty shop in Kirkby Stephen – all other car parking spaces being occupied by farmers’ vehicles.
And we wandered Southishly roughly towards Birmingham, passing the ruins of Lammerside Castle on the way, where we noted that it was getting a bit windy. Regular readers who are aware of the history in terms of weather-related disasters concerning Knipe-Linney backpacking trips will, no doubt, be muttering to themselves “here we go again” under their breath.  No worries, though; we’re used to adversity… 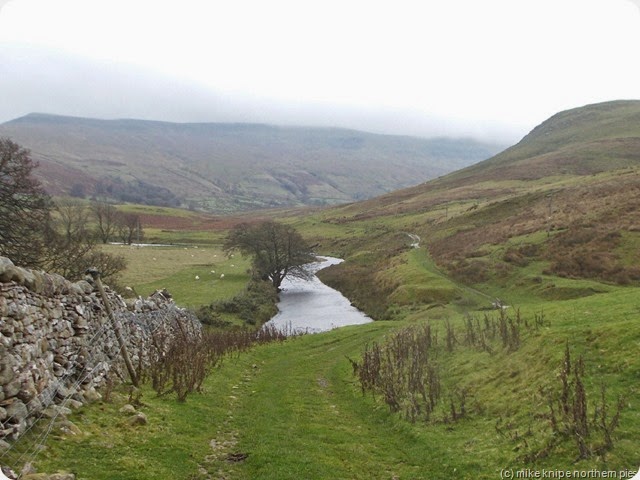 As the rain started, we abandoned all pretensions of bagging the Extremely Difficult and Outrageously Remote and Even Craggy [koff] Birkett Common and made straight for the shelter of High Intake Gill – which proved to be a crap place to camp – tilted, boggy and full of dead trees. However we did manage to find a slightly sheltered spot behind a wall near the top – and hunkered down for a lively night of being battered by hefty winds and slashing downpours – often both at the same time. 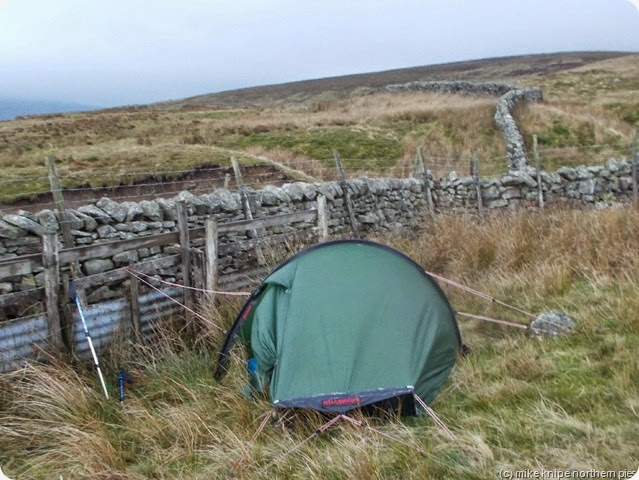 In the morning it had stopped briefly and so, we thought we’d take the opportunity to find somewhere a bit more civilised and a gill quite close to Stennerskeugh seemed, at first sight, on the map, to provide a better prospect. 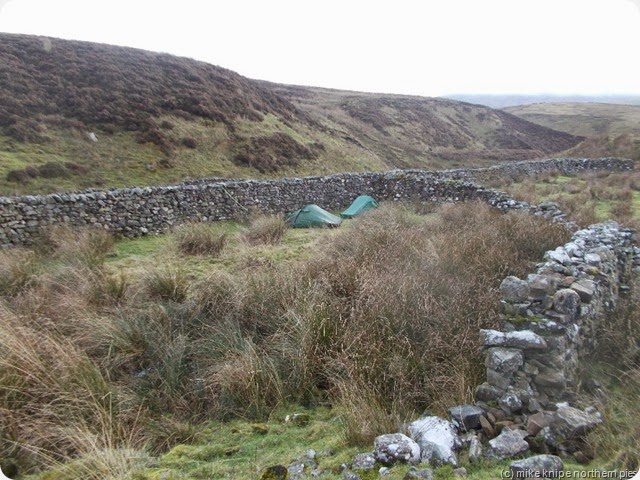 And, as the rain started again, this time meaning business, apparently, we plodded a couple of very rough miles over unkempt heather (didn’t I once go to school with Unkempt Heather?) and a beck crossing which would have proved impossible an hour later, we discovered a bijoux sheltered spot in some ancient sheepfolds with tall walls and access to the tea-coloured waters of an apparently unnamed gill but which I shall refer to as “Long Gill” for now.
The rain continued for four or five hours and the beck began to roar nearby and all my kit was wet and hung out on a temporary washing line. 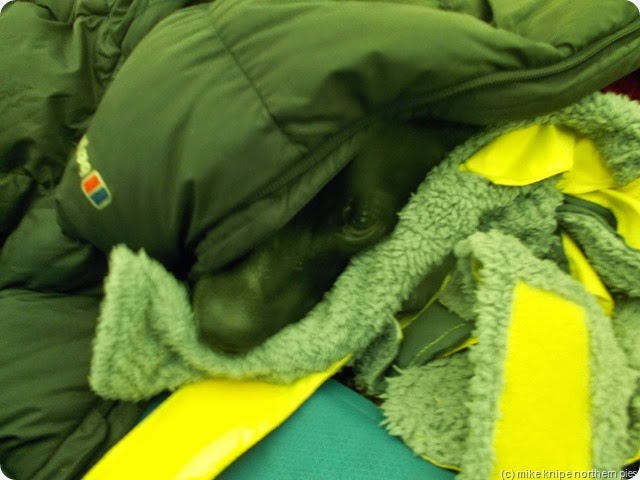 A still and mild night did nothing to dry anything out and the insides of both tents began to drip on their occupants. Several large slugs probably drowned in the internal akto downpour.  And, on a dark and chill morning, the next morning, we decided not to bother going anywhere at all but to stay put and try to dry things out a bit.
And so, for several eons of time, nothing much happened. I used up two sets of batteries on the mp3 and both me and Lucky caught up on a lot of sleep. At one point I had a rather interesting conversation with a small brown slug wearing a small red lifejacket. And at another time I listened to a fox barking somewhere in the night ( a night which lasted from half four in the afternoon till seven the next morning) Highlights involved brewing up, eating things and testing whether or not my socks had dried out a bit yet.. 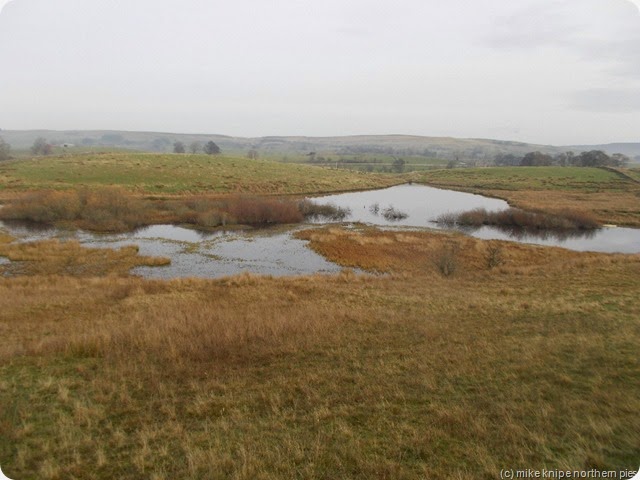 Finally, it was time to go. Another area for camping was selected somewhere, we didn’t know exactly where, in the region of Green Bell, just South of Ravenstonedale.
And it was a nice day – nice and mild, sometimes sunny, not windy, a bit muddy….  and we wandered West towards the rounded Howgills. 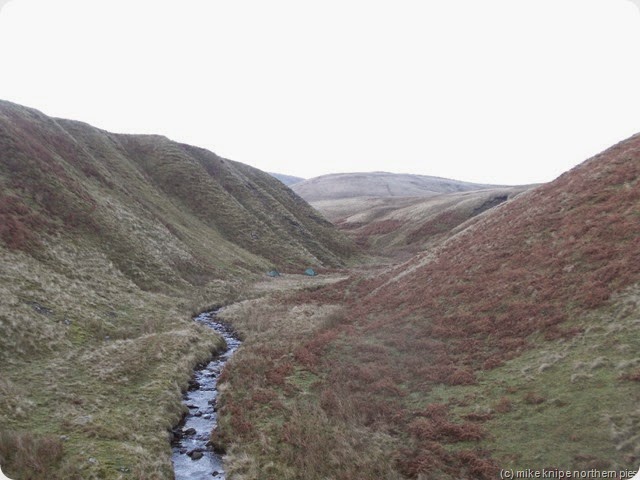 At some point we decided to have a look at Gais Gill. This looked sheltered from any further gales that might happen and, as it faced East, we might get a bit of morning sun.
And so, after a little light rambling, we fetched up at Gais Gill, finding a delightful and discreet selection of flat bits in a deep fold in the hills and a beckful of beautiful clear water just above a small waterfall which fomed a barrier to anyone wandering about with a zimmer frame in the middle of the night.. 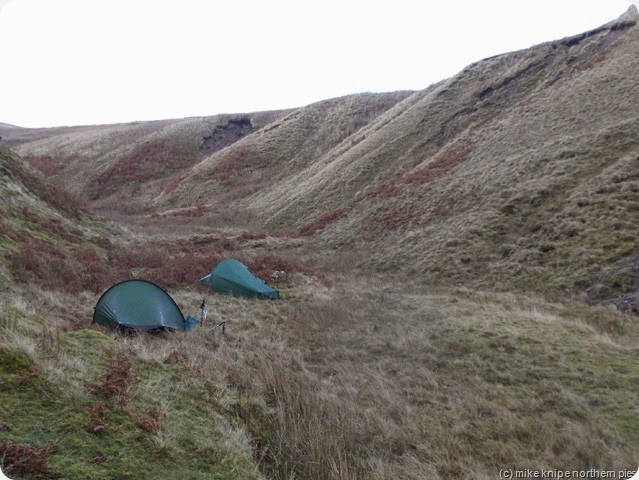 Here, we pitched for a quiet night undisturbed and out of sight from the nosey and out of reach of the gusty winds that had begun again.
The morning was dark and driech and we decided that we didn’t have to rush anywhere… and Lucky agreed, being reluctant to leave the warmth of the tent once we did start packing up. It would be only a short hop over to Smardale where a final short ramble would return us to Kirkby Stephen on the following day. 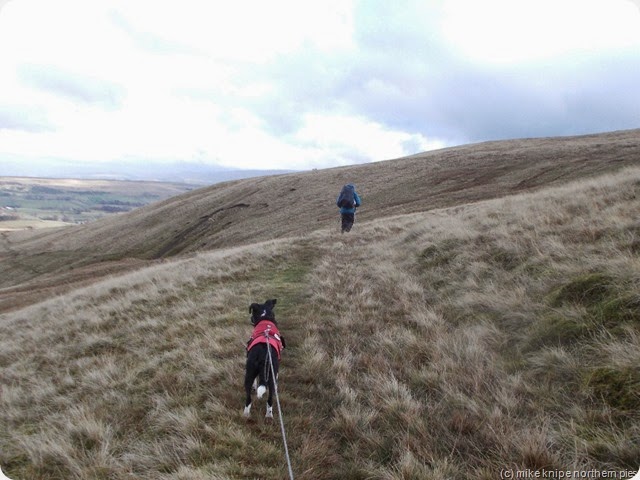 So we climbed a bit towards Green Bell and then picked up the clear path to Ravenstonedale and then to Smardale Bridge where, after a short search, we found a nice spot high above the river at the entrance to an old quarry. And here, the last night was spent. Sometimes it rained and sometimes it was warm enough to sit and watch the sky. A fox barked and a horse neighed somewhere in the dark. 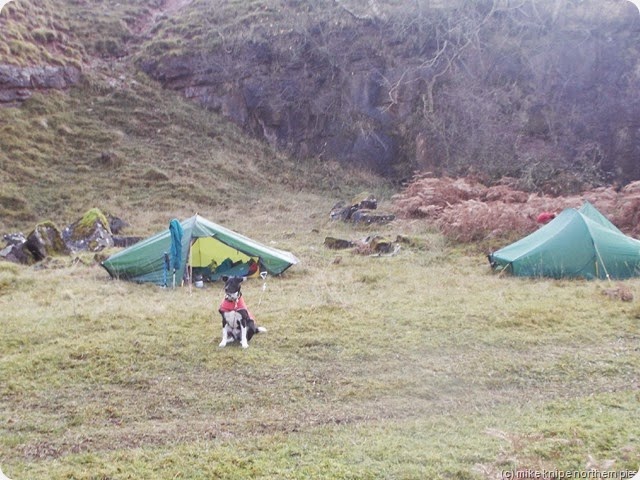 Finally, on Tuesday, we wandered up to the viaduct and along the railway path and back to Kirkby Stephen on lanes and field paths….
I have a plan to take Lucky backpacking on the Coast to Coast walk next May and the really useful thing for me about this little wander was discovering how the dog coped with multi-day trips and, more importantly, how I would cope with the extra food and gear. 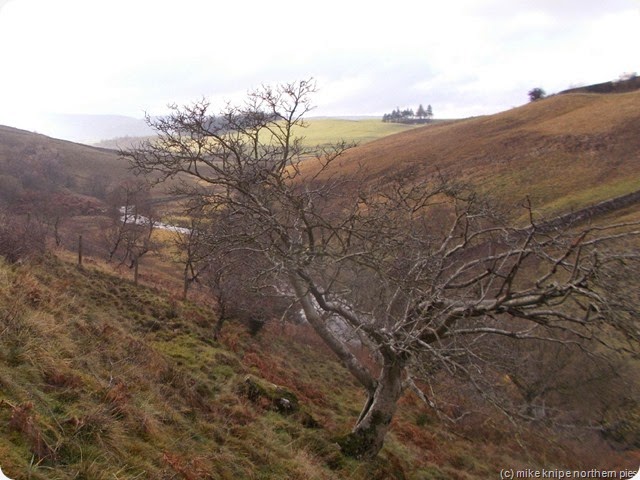 My pack started at a stupidly heavy weight which I could barely lift on the second day. The dog’s food was planned at 300 grammes of biccies per day (thats 1.5 kg altogether) plus doggy treats , dentastix and a few bonios, plus, PLUS, mind you, a lump of karrimat and a small square of woollen blanket and a fleecy coat for night time jim-jams, plus poo bags and a polythene dog dish.
And food for me for five days…..
This is too much, but in May I will be able to dispense with the woolly blanket and I wouldn’t need to carry five days food cos there’s (relatively) lots of shops. 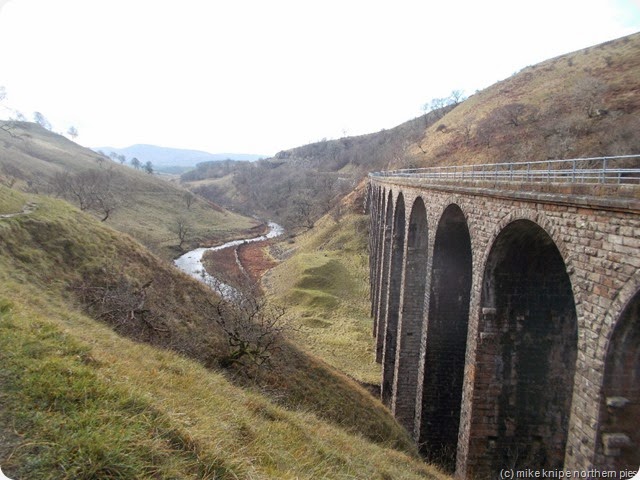 Lucky doesn’t cope well with cold and wet and whenever we stopped he would sit and shiver pathetically, looking quite miserable. Once in the tent and covered by my Berghaus down gilet, he wouldn’t move again till dragged out for a wee. He snuggled up and made lots of “isn’t this nice and warm” noises.
And he didn’t really start eating properly till the third day, so he’s not scoffed the full 1.5kg of doggyscran. 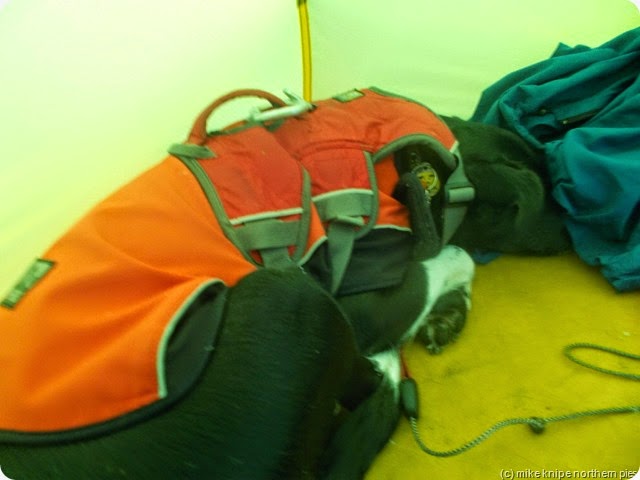 Basically, he needs more fur. There’s a thicker winter waterproof coat in the pipeline which will be better for whenever the winter finally decides to start and I’m hoping that his body will react by providing more fat and fur to keep him warm – it certainly did happen when I first got Bruno…
But his morale had improved remarkably by the third day, and at the end he was back to being his normal bouncy self instead of the shivering lump at the start.
Thanks to Dawn for the usual bits of Linney hill-wisdom and the company and so on…
I’m not saying how far we walked, except to say that it wasn’t very far at all. A lot was learned, though, at least for me and the pooch. Here's a link to Dawn's version of the same adventure - Dawn's blog  (click it!) 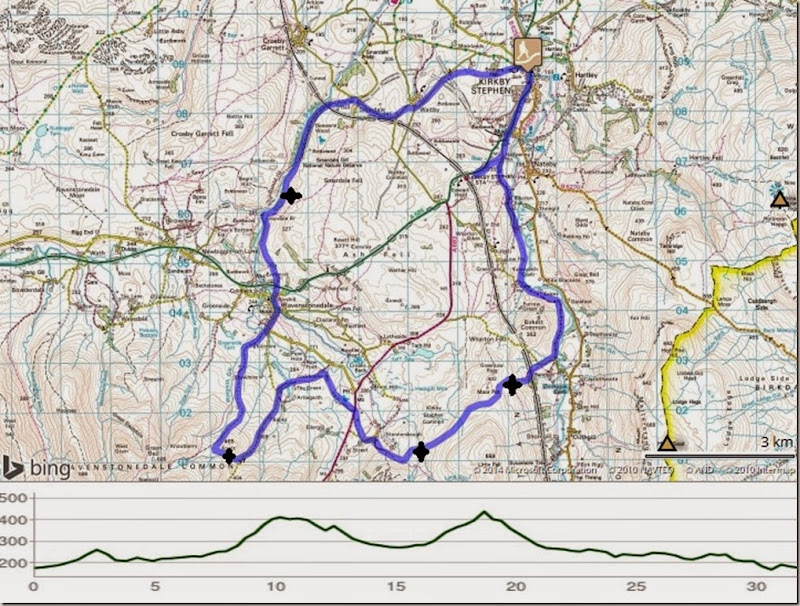 Bet lucky'll be a fully fledged backpacker before you know it. Dixie has a karrimat to sleep on as well.

You don’t have to do a hundred miles and back to have a few training days. It all sounds jolly good. She gets everywhere that Unkempt Heather.
I must get up to Ravenstonedale some time. A friend that i havn’t seen for ages has a farm there and i have never visited it..

Ah yes, Unkempt Heather - last seen working as a barmaid in the Kings Head in Ravenstonedale. Nice girl.
Very good at, er, pulling pints. The Kings Head serves decent ale, worth a visit.
A nice little trip in a quiet area.
I might just have to have a weekend in the hills. I've just washed my Velez, so once it's dry....

Oh poor Lucky, how could you do that to him ;o(

I'm in full sympathy with Lucky's views on this winter walking lark.

I too sit and shiver pathetically, looking quite miserable - and that's after I get home!

How does Lucky cope with the keeping still business over the long winter hours in the tent? I'm too scared to take Hyperdog backpacking this year because he would be driven mad by the lack of space in a tent; and thus drive me even madderer. Recipe for disaster.

A great, if understated, few days it seems, and something of an adventure for Lucky. Been a awhile since we got up to that area, which hopefully we can put right soon!

It was an interesting trip Mike. A lot of tea drunk and varying degrees of wetness and mud. Proper character building stuff!!

Chrissie: Just a karrimat will do for the pup in summer. In the meantime, I think I'll get a doggy fleecy thing at petsathome (his favourite shop!)
Alan - That's what I think - there's far too much rushing about nowadays
John Its very good at the moment if you prefer sleeping to actually walking. I recommend it, actually...
Llona - I'm hoping the dog will toughen up!. I think he enjoyed it really, deep down....
Phil Arf ! I really do sympathise.. I'm not a big fan of cold, dark, wet and windy
Fellbound: Lucky just gets tucked in and doesn't move much. He actually tells me when his covers have fallen off. if I elave the tent and he doesn't see the need to emerge - he doesn't. Its quite good, really
Jules - Understated? Are you suggesting that I've glossed over the exciting bit - the part where I found a slug in the dog's dish or the bit where I tried to open a tin of peaches with a stick..?

Dawn - And such a wide variety of different coloured mud, too....!! (specially the red stuff in Smardale)