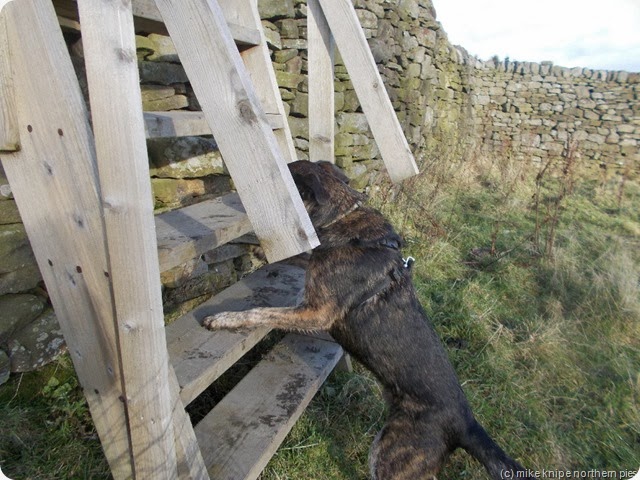 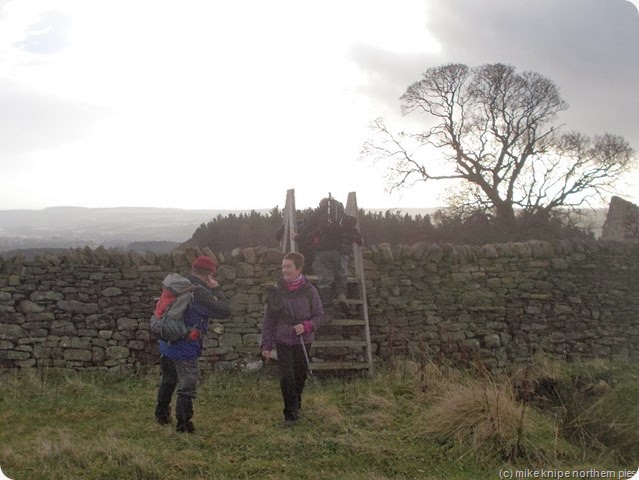 The other side of the biggest stile in the world

I had another Durham County Council guided walk today and this one was around Tunstall reservoir again. me and The Dawg did a reccy last week during that big space between blog posts and, as well as a little trundle around the reservoir that me and the dawg did a week or so before that – just for fun, plus all the other times… 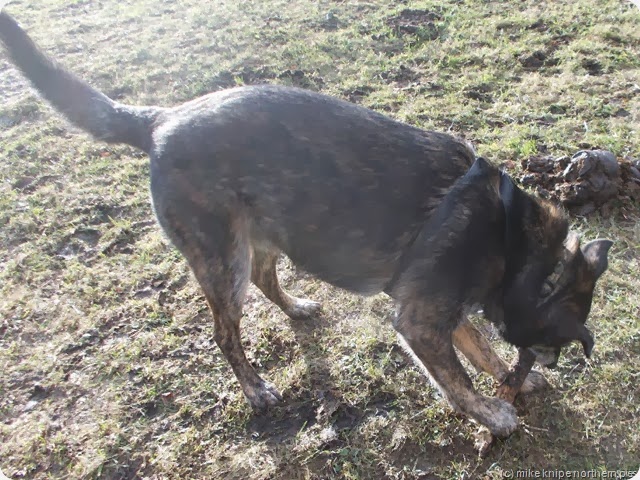 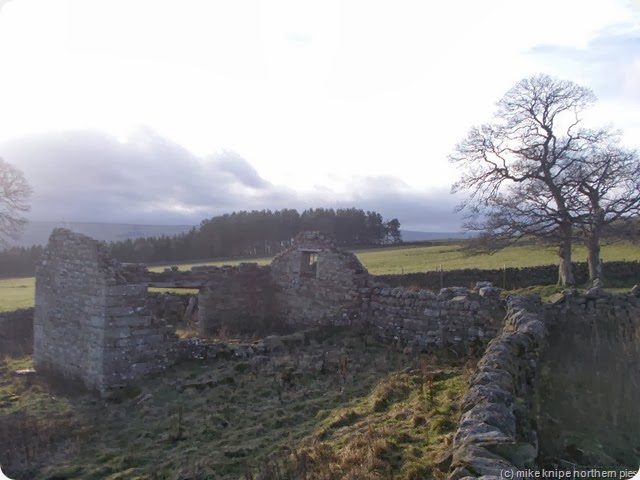 The reccy provided a little intelligence about a fallen oak branch, with all it’s sub-branches and twigs and stuff, which was blocking the path near Park Wall farm, which removed my specs and which Bruno attacked in an out-of-focus and dark pic that I haven’t published  cos it’s out of focus and dark. I reported the tree to The Authorities and since then somebody has bashed a  way through. 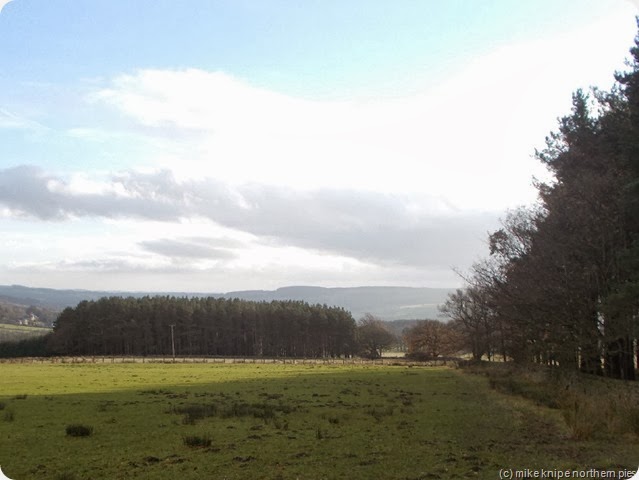 Today, in potentially (i.e. forecast by the Met Office) blustery weather, me, stewards Janet and Steven and ten walkers set off from Demesne Mill for Fawnlees and Park Wall the Biggest Stile In The World, which Bruno can’t get over any more. I’ve learned a few things, though – that park Wall was three farms, all now abandoned, and was occupied from roughly 1814 by Geo Walsh and the last recorded occupier was Jos Robson in 1896 – according to Christine Ruskin’s excellent work “The Disappearing Farms of Weardale” available at all good tourist info outlets and  so on price £12.99 and packed with facts and info  about all those ruinous piles which decorate the hillsides of Weardale. 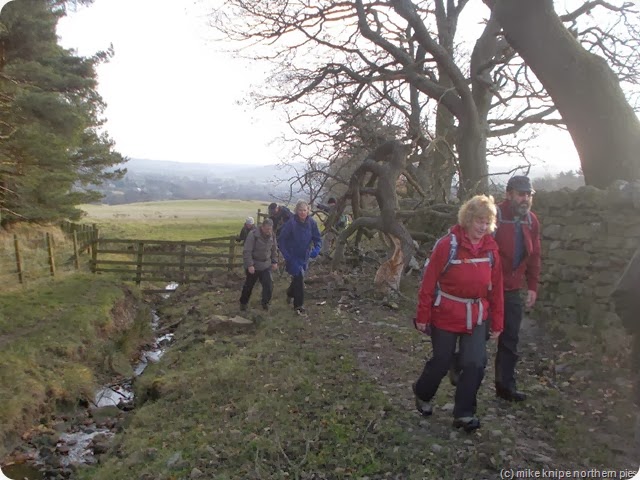 I also learned about the whereabouts of a stash of bronze age cooking stones and a cist burial, and the fact that there’s a “preferred” route to Baal Hill farm which avoids all the dog-manic cattle in the summertime that I’ll probably go and have a look at some time.

And we failed to get batterred by the forecasted atlantic storm, although it did get a bit windy and it tried to rain a touch at lunchtime. 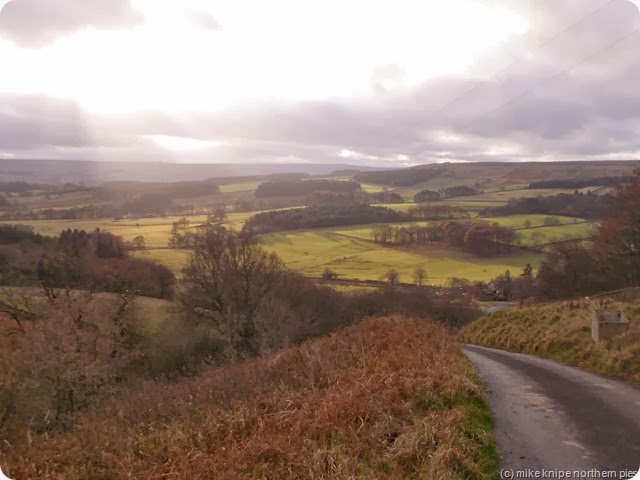 The route is nearly eight miles. There’s a map…  Its quite a nice walk, but , frankly, I’m a bit fed up of it now! It’ll soon be time to put in plans for DCC guided walks for next summer. There’s a general strategy to reduce the number of walks slightly and, I’ll be cutting out the ones which either involve much car travel or which I’m a bit bored with. A couple of people have given me ideas for new routes, and, we can now cross the county boundary more seriously than before, so , I think eight walks, with two or three new ones, instead of the 12 walks I did last summer (with the reccies, that’s 24) Instead, I’ll be doing more Bagging in the Borders and Birkett Bagging and possibly other things beginning with B. 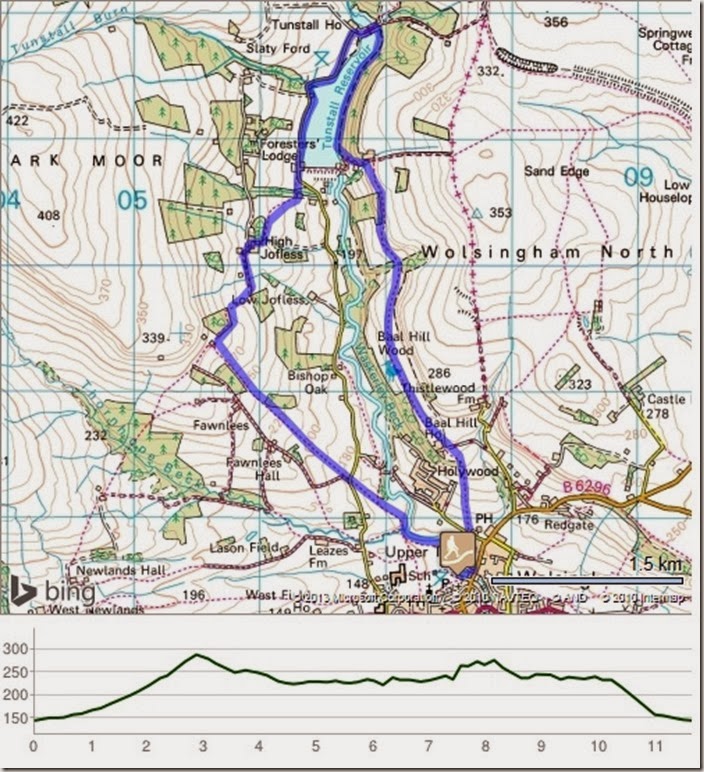 Now then Mike, do they not say that a man who is tired of Tunstall Reservoir is tired of life?

@Tony Bennett - well you left your heart in San Francisco, which strikes me as being absurdly careless.

I have the same problem with stiles and fences myself these days!

Tony - see Peter's comment below...
Dawn - it's fckn huge. You can see BlackpoolTower from the top
Peter - see Tony's comment above, although, I'm sure you're right
Andy - I tend to use the gate at the side....

Stiles and stuff are exactly the reason Dixie now goes out on walkies wearing a very nifty Ruffwear harness with a handle on the back.......

Right up your street?

Chrissie - Maybe Santa will bring superdawg a ruffwear harness.. He's a danger to himself crossing fences
Alan - Oh no, not more tickables... They're inventing ticking stuff faster than I can tick.