Attermire – Not a Wainwright Outlier 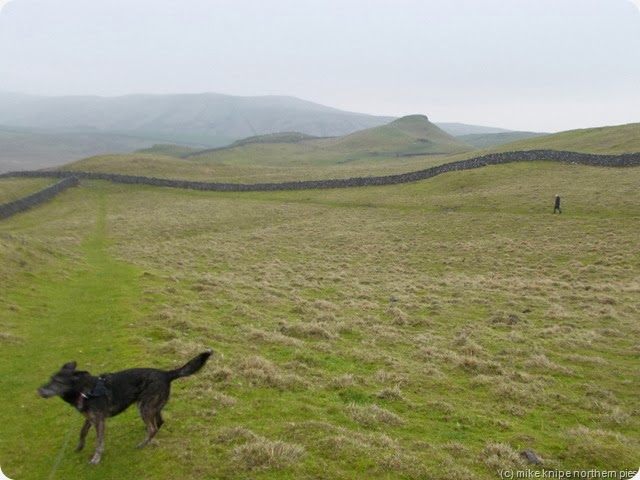 The plan for today was to go and bag The Pike – one of the two remaining unbagged Wainwright Outlying Fells that I’d resolved to compleat (sic) in 2013. It became clear, on the outskirts of Kirkby Stephen that the weather forecast for Cumbria was correct and a fine wind-driven drizzle of the Very Wettest Kind was likely to make a trip to the fells of Dunnerdale a remarkably unpleasant experience. Bruno, sat in the back of the car, agreed. 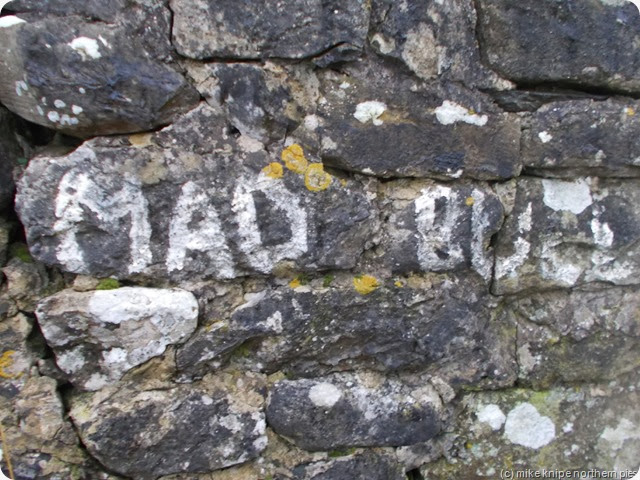 We got to Kendal and almost set off for Dunnerdale when a new plan was made. We decided that it might be drier at Ingleton, and, maybe Ingleborough would be a good place to go. The fact that we didn;t have maps for the Yorkshire dales was dismissed as a minor problem. Penyghent was mentioned, then , maybe, Fountains Fell, all of which seemed possible. Then Ria mentioned the caves at Settle and, in particular, the Hoffman limekilns, which I’d not visited, but had heard about. So we went to Settle. 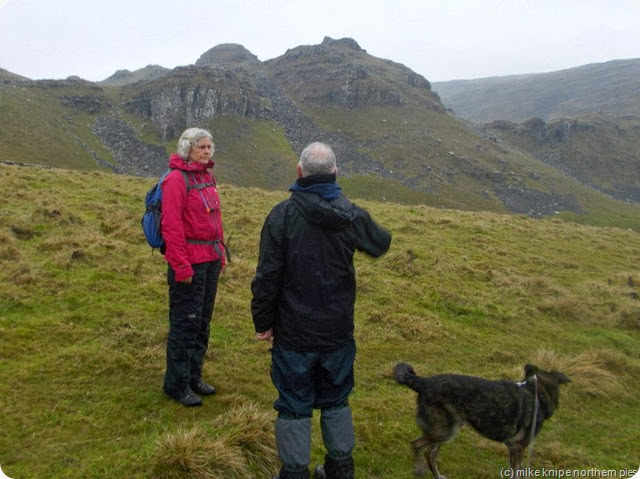 We set of in just in dry conditions, which eventually resolved itself into a light drizzle. The Bro decided on a lightweight approach and left his pack and butties in the car. No maps, no butties, a thin plan, short daylight, hillfog…..  heart conditions…. 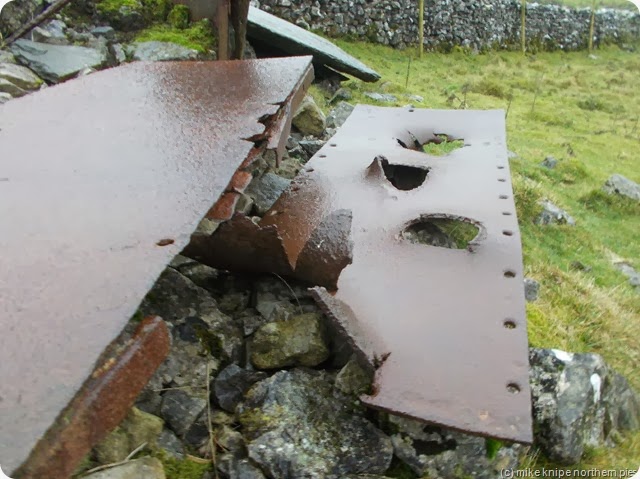 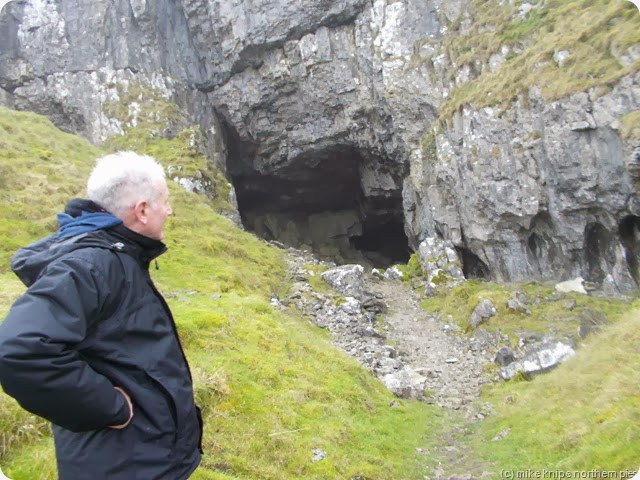 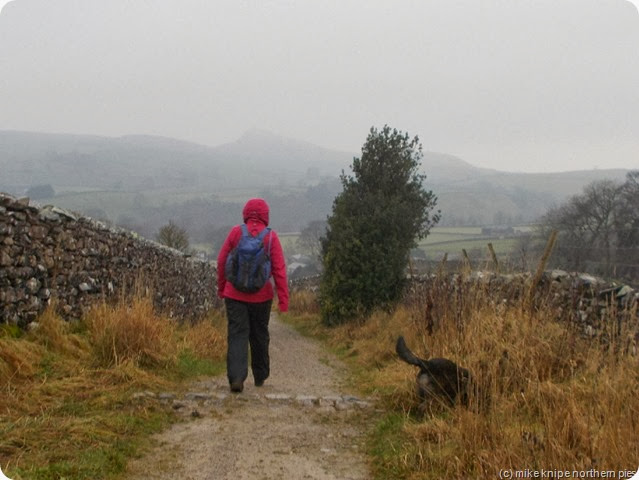 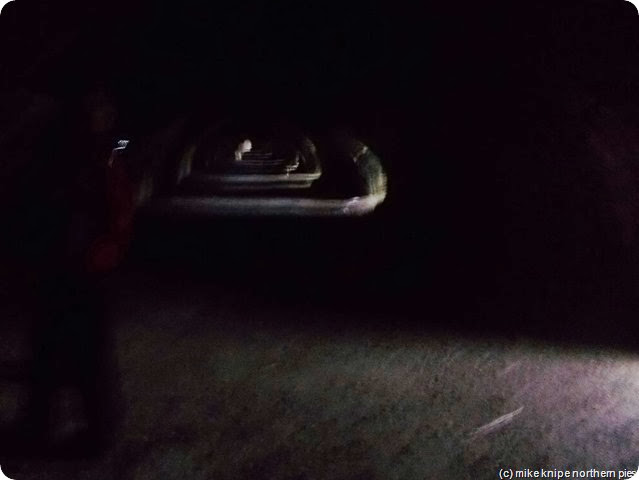 I was impressed by the kiln – a huge abbey-like gallery, very dry inside and a perfect place for a pickernick on a draughty day, or, maybe, a discreet bivi, perhaps.
We finished through Langcliffe and along the Pennine bridleway. 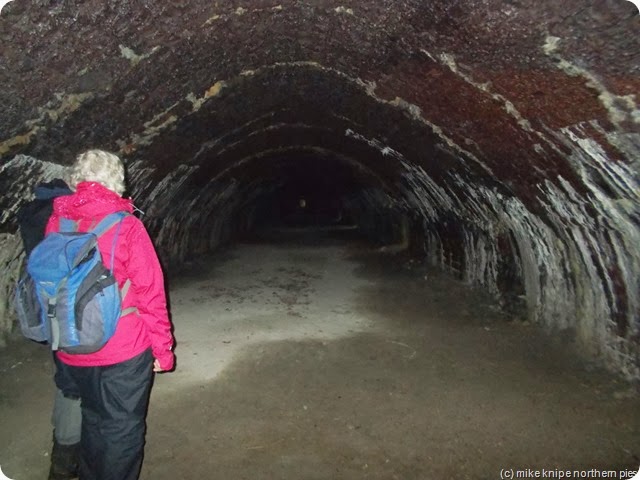 The last two Wainwright outliers will have to wait till 2014, it seems. It’s too far to go there now and my vision is for the Pike to fall to the Pieman’s ticking pencil on a blustery, cold, bright and sunny day in April when the daffies are flowering….
The Attermire walk was about seven and a half miles. Of course, we’d been to Attermire dozens of times before, going back forty or fifty years, mainly without maps, occasionally, as youths, not completely sober, and sometimes armed only with a hundred and fifty feet of rope and a rock-climbers guide to Yorkshire limestone.
And we only got a little bit damp.. 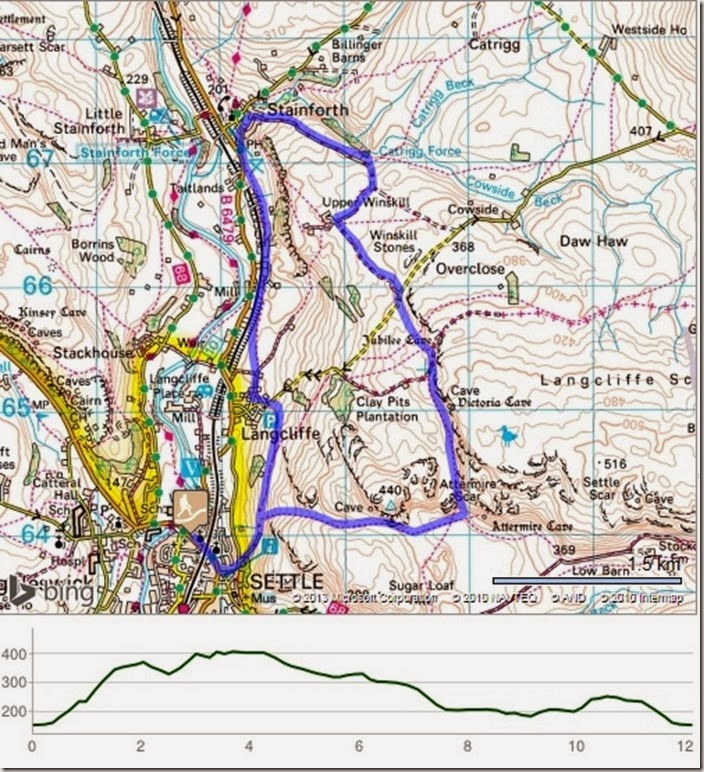 Now that is walkies with a difference, fascinating stuff!

You walked past our front door… and our kettle was probably on!

Them big bits of punctured iron are old artillery targets (the holes are where they hot).

I fully intended to eat the left behind butties for my lunch today. I remembered them after I had eaten an alternative lunch, my memory having been prompted by Jill. I didn't think they would last another day. What a terrible waste. Still, much easier climbing without a pack and sharing other people's lunches assists a more balanced diet

I always like some of the unexplained pictures, like 'Mad Bull' (if that's what it says) painted on the stones. And the rusted sheet metal sitting out in the middle of noplace. The first picture could almost be Scotland, it's so bleak. I love that type of landscape; although I never expected to till I'd first seen it in person.

Lots of interest on that trip Mike...surely no one can fail to be impressed by that there Hoffman Kiln??!!

Dawn ..and I .spotted a couple of nice "informal/discreet" camping spots!
Deppity - I did look through a few windows in Stainforth, but stopped when the police neeh-nahhs started..
Bro - Bruno would have had them butties...
Reifyn - I says "Mad Bull" Not sure why it's so annoyed. And the ironware is a WW2 target - mmainly small arms, but also anti-tank artillery - hence the big holes
Al _ I loved the kilns. What's surprising is that this used to be my stamping ground and I'd never been before

Interesting trip. The caves sound like they were fun to explore.

I have been along some of that route, and seen the Hoffman Kilns. They are amazing. Thanks for the memories.

How come I've never seen them kilns even though I've spent half my life walking around that area?