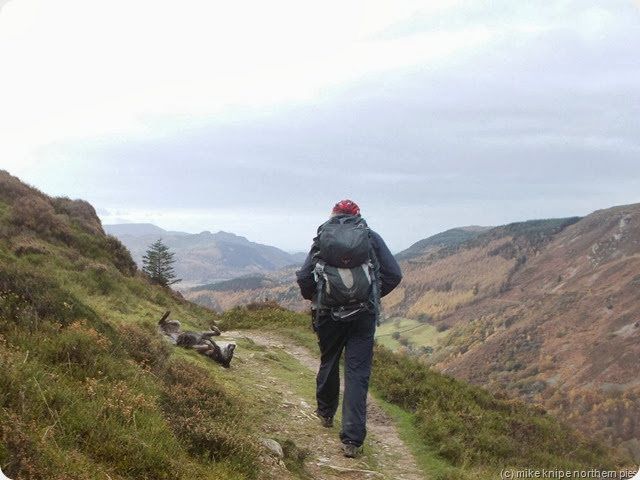 Following Dawn’s recent adventures with the medical profession in That London, it was judged that we might have some tentative steps at resuming some camping and walking operations   (apologies, probably not the best choice of word) – activities.

And so, me and the dawg collected Dawn from the train station in Welshpool and hurtled off into the Welsh hills to turn up at the technically closed, but gently negotiatedly open campsite at Mallwyd. Here we pitched in the campervan area due to the general sogginess of the ground and the fact that taking the knipemobile onto the grass, would probably destroy quite a lot of grass. So the car was on hard standing, see…? 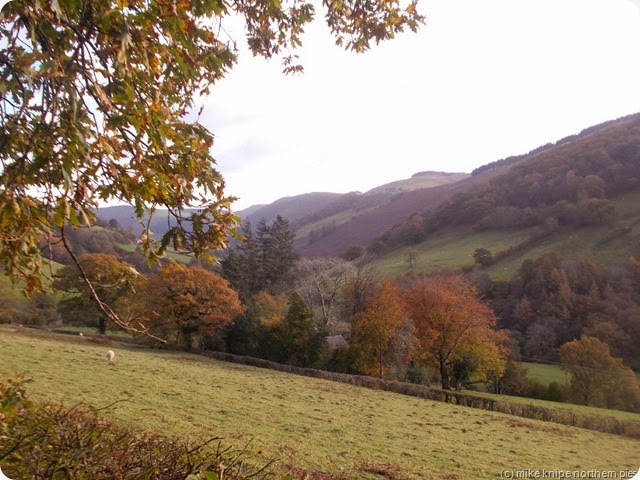 In the morning, we launched ourselves fairly enthusiastically up Cwm Cywarch, a specially beautiful dale within easy reach and the  potential starting point for many hillwalking adventures into the Arans.  The Cwm was extra specially beautiful today in it’s autumn colours and with a bit of sunshine trending almost into “warm”. 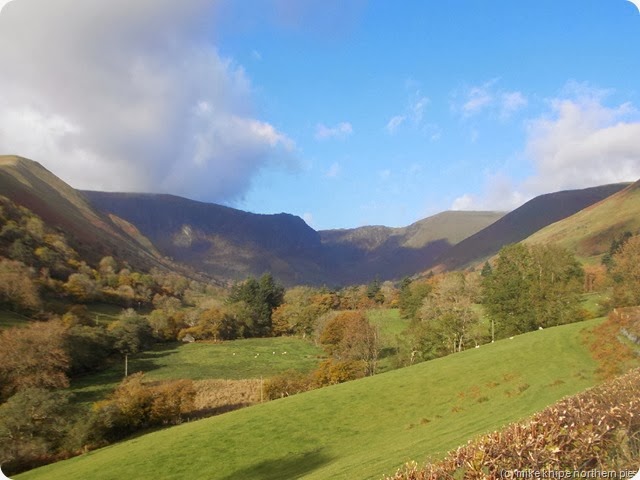 We did a little circular route of just over six miles and retired back to the tents for sausages and mash.

There may have been a bit of frost overnight, but me and Bruno had planned well and whereas I had a golight down bag with a fleecy liner inside a RAB bivi bag and a full-size hot water bottle plus a generous supply of cheap whisky, Bruno had only his thick dog bed with the pictures of bones on it (thick bed, not thick dog!) plus a fleecy blanket wot I bought in Skipton twenty five years ago, plus a hot water bottle wrapped in a towel to prevent the scalding of a doggy bum and fortified with winalot, kibble and a dentastick; we had a cosy night. 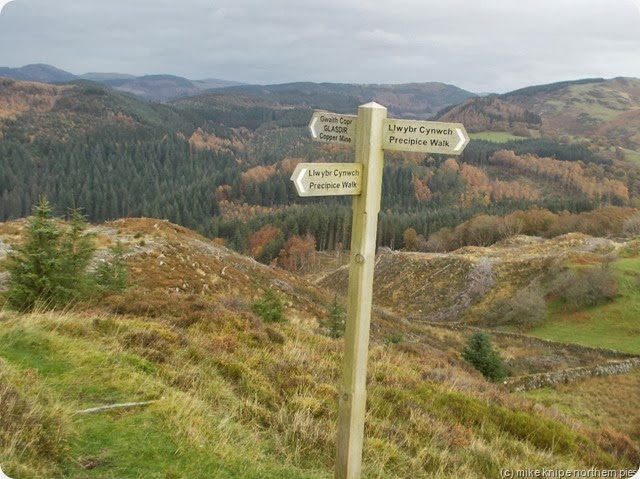 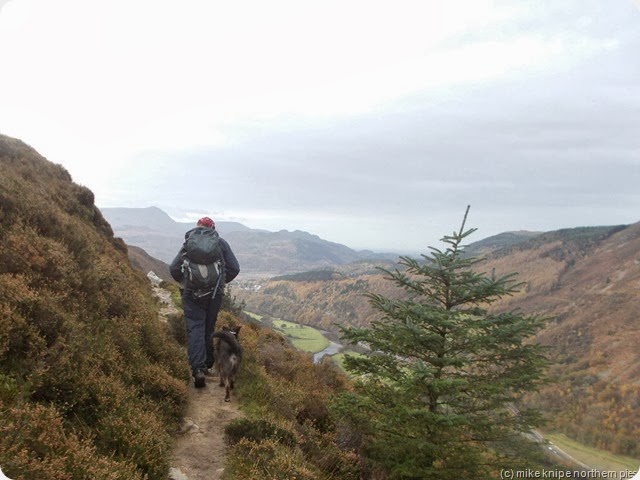 In the morning we all went to Dolgellau to walk around the Precipice Walk. This is a fab little walk with cracking views and a mountaineering feel due to a big drop on one side. But it pretty much sticks to one contour and circles a hill, thus providing a fine walking experience for not much effort. Its a grand walk. Everybody should do it. 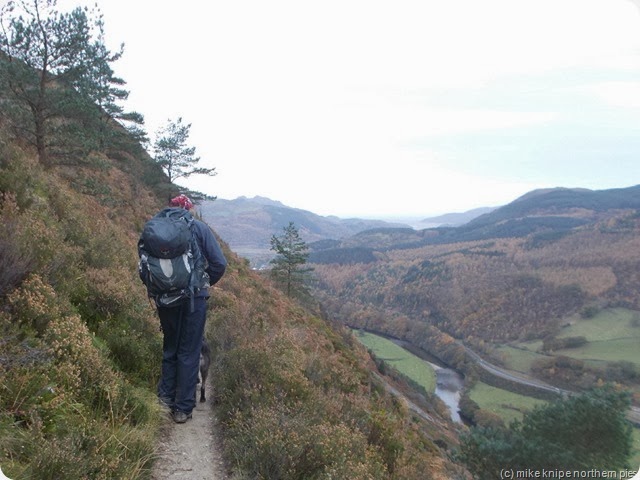 After this we went to Barmouth for a paddle. Bruno found and lost a plastic ball. It had somehow slightly damaged his gum at the front. Maybe he chucked it away.

A wet and windy night followed during which it was found that my venerable two man/one-man-one-dog Wild Country tent which had been on two TGO challenges and many other adventures, was as waterproof as a bath sponge. So, not only was it raining outside the tent, but also…. 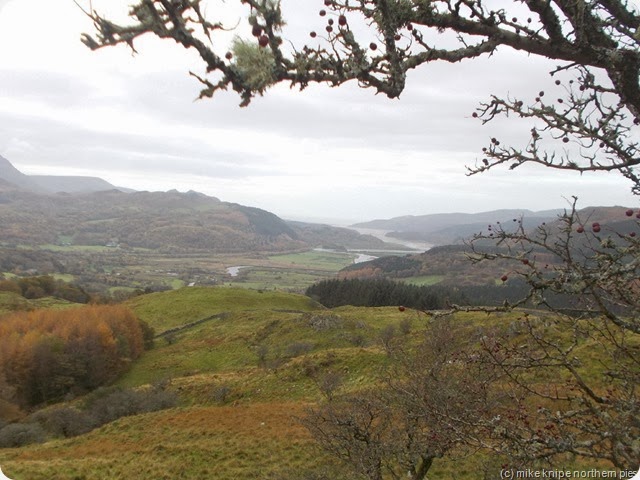 We left for Welshpool a bit early (!) and had plenty of time for a huge Full English at a small cafe before pointing the knipemobile back towards England, leaving Dawn to get the train back to That London.

Quite a good trip. I need to reproof / seamseal that tent. Or, maybe some tent manufacturer needs a review? Eh?  Any chance?  Is that a “no”, then…?

Sounds like a good trip (except for the sogginess...) Love the idea of Bruno all tucked up and cosy, he'll have been happy to go with you on a camping tripping for a change. Really good to see Dawn getting out and about too.

Maybe I will visit this Wales place one day, but it's a bit too far south for me...

I thought you bought a new Akto? Was the Wild Country just a wee tent for doggy poo's and A.N.Other. Hope Bruno didn't drink all the 40%.
Hope Dawn did OK, but I will read her post soon I expect.

Louise - It were grand, apart, as you say, for the sogginess. We had proper scoff, too!
Alan - I did buy a new akto, but , as we were campsite camping, I thought me and the dawg could spread out a bit. Bruno's not allowed scotch as he's only 13...

You really brought back some good memories. I used to stay just a short trot from the precipice walk near Dolgellau, and walked it all the time. And the Morfa Mawddach estuary. Those were the days—how I miss Wales. Thanks for bringing me back.
And Louise, you will never regret a visit to "this Wales place", especially if you love Scotland, another place I miss.

Only just noticed Bruno in the first photo - playing to the crowd! Priceless!

Reifyn - I can testify to the sheer beauty of the Dolgellau/ Morfa Mawddach area - and , indeed the Cardigan bay coast (a special favourite for the dawg). Maybe we'll do a pre-TGO thingy specially for those living in the Far North who can get to N Wales by train!

Laura
Bruno is showing his naughty parts. Actually, they're not all that naughty since that night at the vet's

I'd love to, I'm sure I'd love it, but going south of the border would mean having to visit family and I avoid that like the plague!
One day.

It was a good few days away Mike, many thanks.