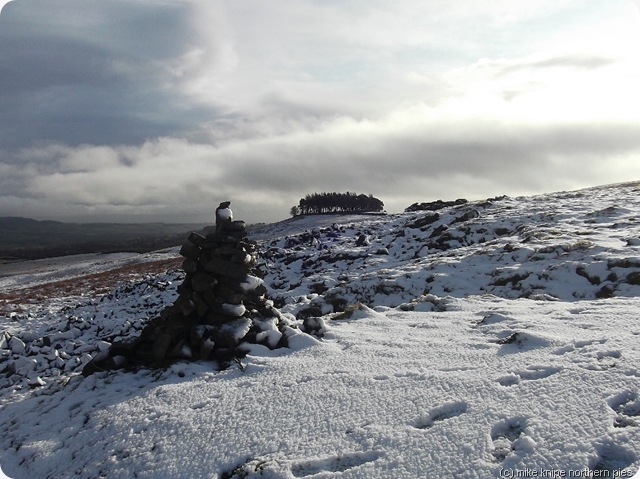 Carreg Caryn (aka Kircarrion) is a copse of a hundred or so pine trees in a walled enclosure which has no entrance and sits on top of a small knoll overlooking the junction of Teesdale with Lunedale. The wall was built and trees planted was built on the orders of the bailiff of the Strathmore estate following the enclosure of Crosthwaite common on the 1830’s and it protects the burial place of a long-dead British prince. It’s reputed to be haunted by Prince Caryn, but we don;t believe in such things nowadays but , the landmark is atmospheric and , on a shivery mid-winter morning near the turning of the year, it’s dark and brooding prescence is just the place to witness the dawning of a new, grey morning.

When I arrived, it was pitch dark but the route to Kirkcarrion from the layby is easy to follow and quick to walk. I entered the sanctum where the wall is falling down and got to the little cairn in the middle. The world was dark and misty with a seeking wind blowing icy rain. I waited in the quiet. 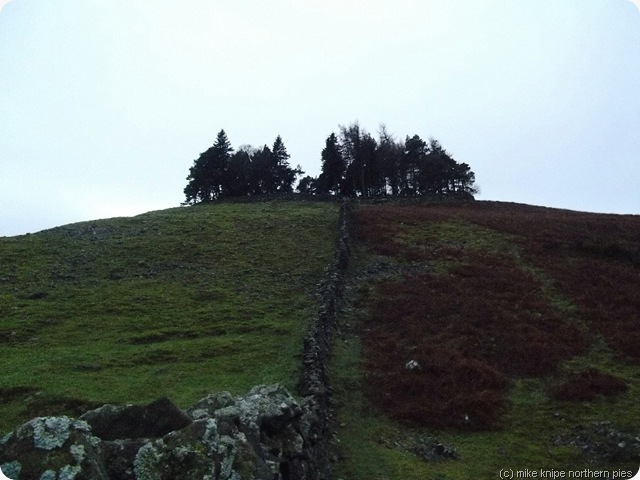 As the dawn began to seep into the trees, I could start to make out the shredded nature of the mist. I must have been just below the cloud base and the ragged ends were blowing through the wood, dancing around the trees and rushing on, out over the fell. It was as if the place was full of swishing wraiths , spinning and pausing, and teasing sometimes with outstretched arms. It was quite unnerving and rather than feeling safe inside a sheltered sanctuary, it was beginning to feel more like a trap. The sky lightened a bit more.

I decided to see if I could get a picture. Several attempts failed to get anything much on the camera’s screen.  I was starting to get so twitchy about the place that I could imagine dark shapes moving at the edge of my vision. A crow, maybe. My attention was being drawn to things that weren’t there.

I got a very poor picture of the cairn in the middle of the wood. But it was dark and misty and….  there’s a light on it, moving from left to right at some speed…. 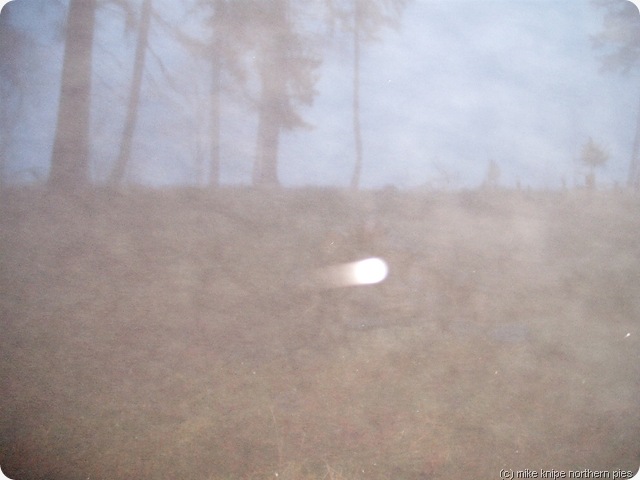 As my watch said that the sun had now risen, it was time to go. I’ve left the place to it’s spirits. You can go there if you want.

I mean ter say, it wouldn’t be Christmas without a spooky tale, now would it? Mwwwahahaha!!

These lttle groups of trees on top of hills and mounds are always spooky...
Looks like a good spot to spend the night to me (but perhaps not on my own!)

Maybe it was Kylie - just trying to send you a message....?

There's spaces enouh for tents inside the walls, Chrissie - or a summer bivi could be nice
Trevor - Thanks Trevor - and you too...
Spirit of Kylie, Laura? I should be so lucky.

why's it got a Welsh sounding name (oh mighty oracle and font of all outdoorsy knowledge)?