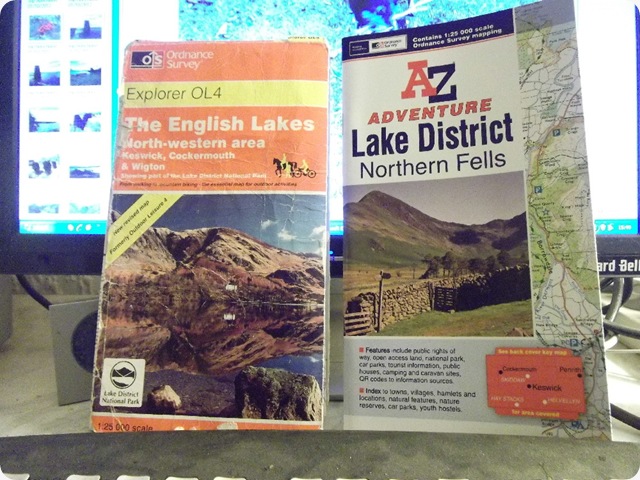 Most pieblog readers will be familiar with the A-Z mapping concept.
I was a bit sceptical when I was offered a copy of an A-Z atlas of OS maps for review but more than chuffed when a small cardboard container plopped through the portcullis at Knipetowers this morning and which, when opened, revealed a neat little book containing an  A-Z Adventure Atlas of the Northern Lake District at a scale of 1:25000 and even more chuffter (made up word) to find that I could now fit the equivalent of Outdoor Leisure Maps OL4 and OL5 in a small pocket.
The first of the series of these Adventure Atlases
are now available with a special price of £5.45, with free postage from A-Z Mapping Co. Those with children studying arithmetic will be able to calculate that if the full price is normally £7.95, this is a discount of just a bit over 31%.
But what are they like, I probably would hear you ask?
Firstly – OL4 and OL5 have been somehow fitted into a small booklet 14cm x 24cm and weighing 150 grammes which is around half the weight of the OS maps.
The maps appear to be exactly the same as the OS maps at a scale of 1:25000
There’s a key, as on OS maps.
There’s a key to map pages, so you can find which page to use (provided you have a vague idea where you are!) 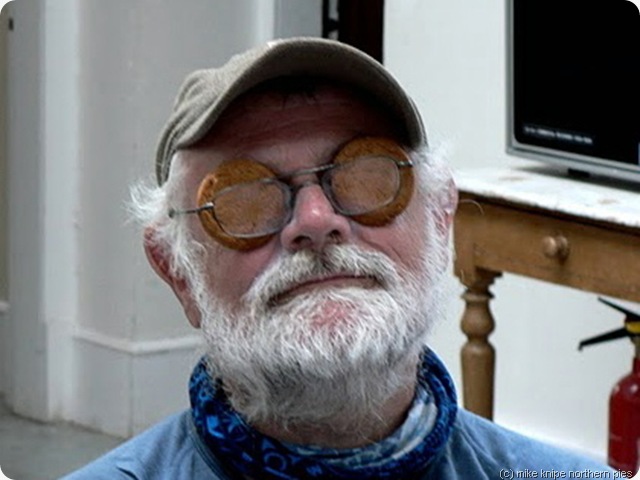 There’s an index of place names with grid references. This seems to be an very useful innovation since the list of places is extensive and appears to cover even fairly obscure Birketts, for instance.Want to know the grid ref for Heckbarley?  It’s NY766142 ! Tap this into a GPS and Robert is your mother’s brother.
There’s a page and a half of Safety/Security info – the usual stuff, but good advice for many who don’t seem to appreciate that heading off up Snowdon at half three on a November afternoon dressed in jeans and a jumper is the thing to do….
And there’s a section of QR codes for national park info, Ramblers, Weather, Access, Advice on map reading (possibly a bit late!) Danger areas and Mountain rescue.
Maps currently available are:
South West Coast path
Dartmoor
Lake District North and South
Dark peak
White Peak
Snowdonia
Norfolk Broads.

The offer expires on 31 December 2012
The website isA-Z Mapping Co and the discount code to be entered at the A-Z cart is TRMK250
I’ll be trying mine out on the hill as soon as I can….

That's weird. They sent me a free map and told me that a discount code for 34% would be emailed to blog readers and then it turned out to be only 20% so i turned the offer down.

Glad you got a better discount but still doesn't beat Dash4it with extra 10% off everything.
Like i say, weird? Still good maps though.

I bought the Northeren Lakes book and found it useful on a week's walking. No chance of taking off in high winds and much easier than trying to fold a map inconveniently folded to the wrong side.

The correct word is 'chufftier'

Co-incidentally I've just bought two of these map books for the SWCP (there are five in all) - if I do try the route I thought they would be easier to use/carry than the pile of the usual maps it needs.....I'll be interested to hear how you get on with them.....

Biscuits on the eyes are a proven cause of lunacy. Or it might be the other way around. The point holds.

Bet you can't do that with Jaffa Cakes :)

He can, Tony, and proved it with questionable results at Der Biskit Fest in Berlin 2009. There was a minor riot and Knipe escaped with only a grazed elbow.

On order! Cheers for the heads up.

Oops - confession time. I thought this was another Northern Pies spoof review until I came across another review. In my defence - AtoZ of the Lakes? - it still seems a bit unlikely. Will a copy of 50 shades sit neatly inside......?

Thanks each - The biscuit pic isn't me, actually, it's Uncle Bob. Biscuits are old hat for me, of course. You should see me with a chappatti.
I think I'll order Dartmoor... it's not a joke, Mark - only in April. I'm going to try mine out on Cockup in a week or so. An omen, perhaps...?