Breaking the Duck on a Local Walk 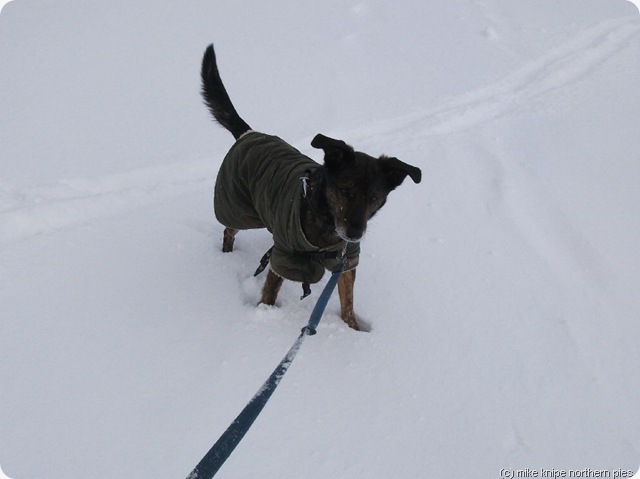 Following yesterday’s floundering fiasco up the wrong end of Weardale, I was determined to break the 2010 duck, yet at the same time, stay out of any very deep snow.

A quick look at the OL wotsit map of Bishop Auckland and Crook, revealed a bit of woodland I’d never been in, and a suggestion that it would be a nice idea to have a look at Weird Darren’s Oakenshaw Nature Reserve, since I’d never been there either. A nice, logical circular route from Chez Pie revealed itself. 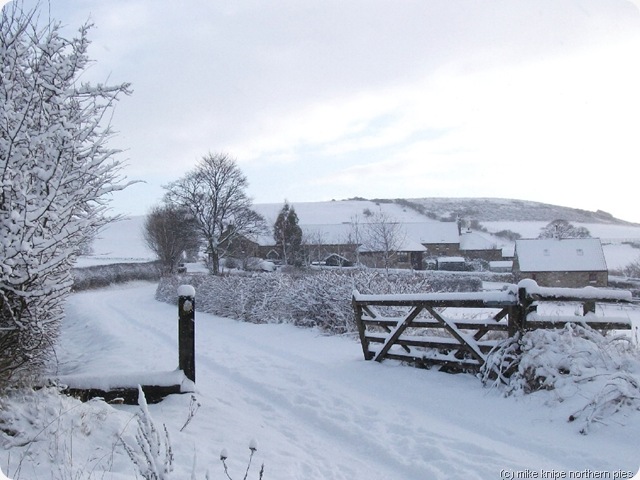 Pretty scene on the Deerness Valley Walk at Crook

It had snowed again overnight. This cheered up the dog no end.

After prevaricating a bit with cups of coffee and boiling an egg for the egg and tomato butty, we set off up the Deerness Valley Walk. 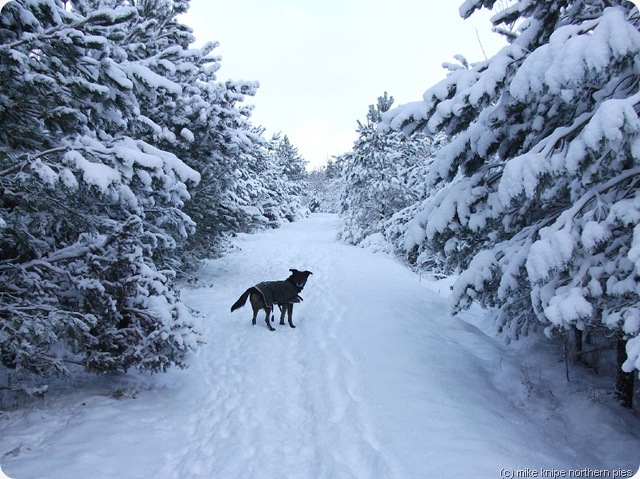 A bit further along the Deerness Valley walk

This was quite pretty and well populated with families and their dogs and people who were in the first throws of delivering their New Years Resolutions concerning doing more walking together and using those new walking poles.

A blizzard came and went.

We turned off the DV walk and wandered across some fields and into some woodland. The path, whilst served with “public footpath” signs and waymarks wasn’t really there. there was blundering to be done. We blundered. It got better, though, and we struggled through the deep soft snow up to Baal Hill where we joined the “road” ( inverted commas included for irony) The road was well under hard packed snow and wasn’t really useable without 4WD. Boots and paws slithered. 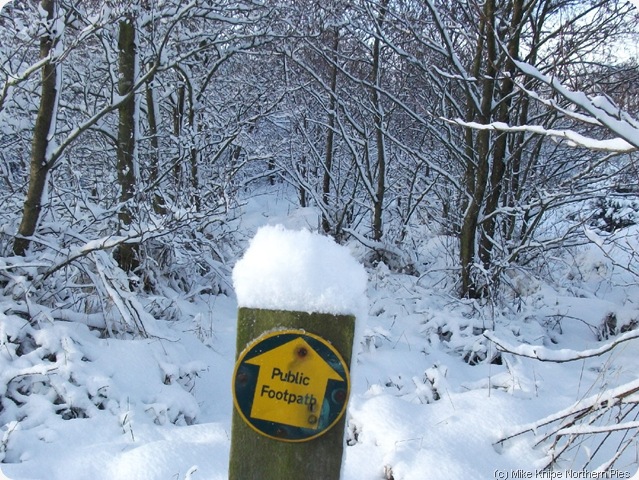 I may have to report this!

We followed the road and joined the Bishop-Brandon walk – Another railway walk – more families with their dogs and more resolutions in the first throws of deliverance. 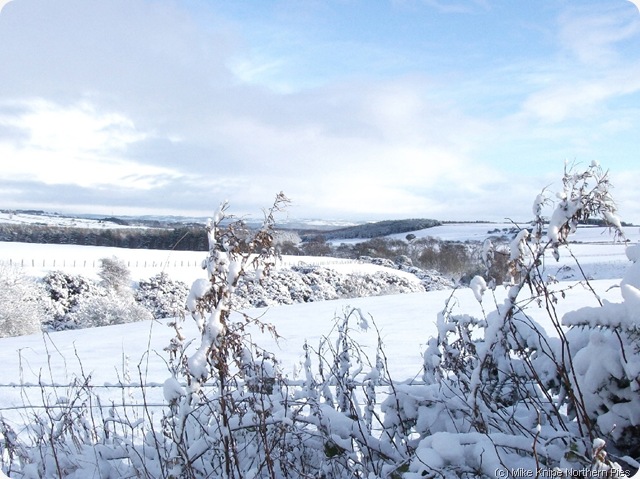 We had a quick visit to Oakenshaw NR – I searched for three-legged dog tracks, but failed. It seems, by the tracks, to be fairly popular. The local ducks were enthusiastic but remained unfed. 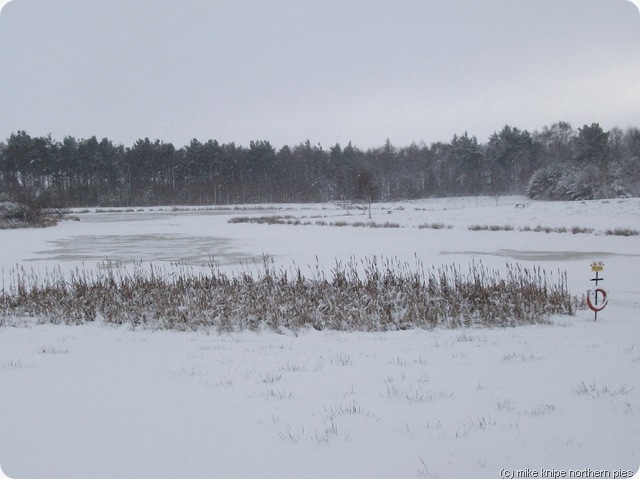 I followed field paths and a Roman road to Willington with some difficulty. The snow was drifting and getting difficult again.

I abandoned my original planned route and followed the road back to Crook. Its not so bad, there’s an off-road path all the way. 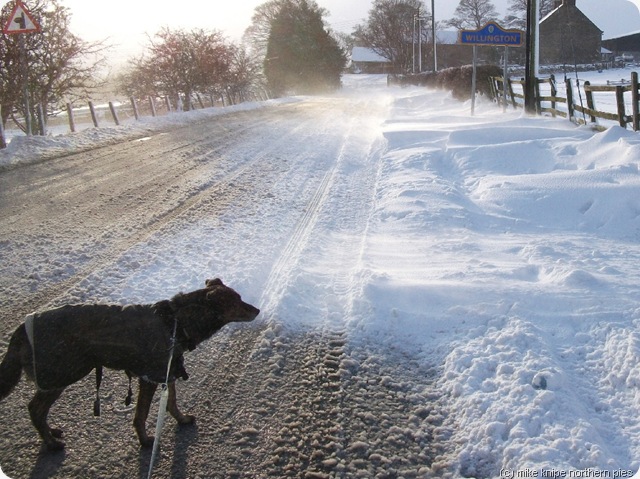 The population of Willington was it’s usual friendly self – five people said “hello” and “happy new year” and “all the best”…..

When I got home I was, to be frank, quite knackered. I resolved this with hot cocoa and cold beer and a snooze with the dog before tea. 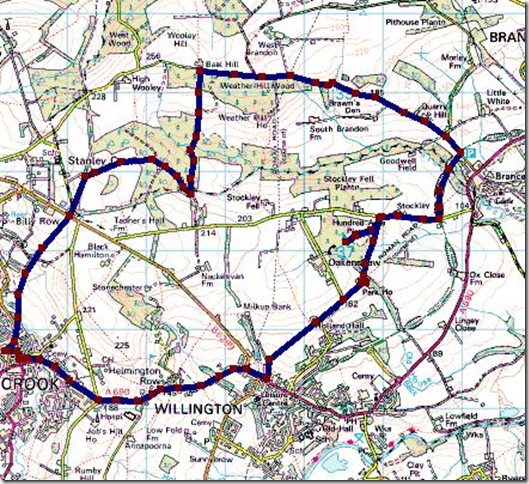 ...and boiling an egg for the egg and tomato butty...

Piglet still v. impressed by B's coat. Could be this will persuade her to try on her new one tomorrow.

....and a very nice butty it was too - one of my favourite butties , in fact.
Good luck with Piglet and her new coat...
Just off put now for another local walk and there's been a fresh dump of snow...

Very good, Mike. I think you've spurted into a small lead (the dog must have helped) for 2010, and 2009 camping nights were impressive.
You should get some snow shoes, though!
Have fun!

The dog has a much longer lead, Martin (arf arf)
Snowshoes! Yes! I'm on to it... them....
If I buy some it'll never snow again, though