Manod Mawr and other things 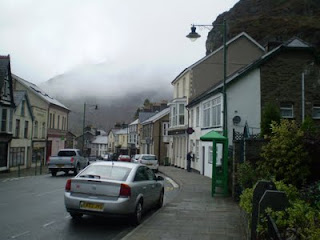 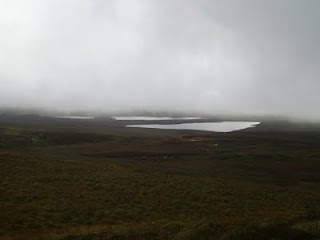 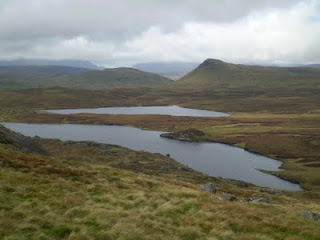 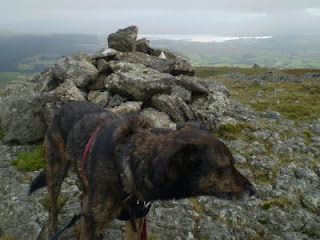 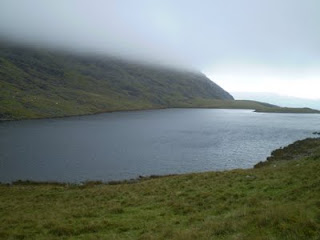 Walk Three of my Welsh Wanderings in the Wain.
Ashley, it wasn;t raining, but it was very foggy on the hills, from about, say, 300 metres and upwards. I like to call this fog on the hills, “hill-fog”. There was hill fog and I decided that today, I might need a compass. Unfortunately, I ‘d left the damn thing, along with my other compasses (I have a collection) in Crook, some 250 miles away from base. Attempts to buy one in Blaenau Ffestiniog failed. So I determined to use my GPS instead. This worked well.
I left a misty and driech Blaenau to it’s cwmpass-less ness and plodded up through grey quarries on to a greenish-grey desert of damp brown grass and along tracks to a high tarn or lochan, or , maybe a little Llyn (Llyn bach?) one of two Llynau Barlwyd just below the beetling slopes of Moel Farlwyd, which superdawg pulled me up dogfully. We tarried not on the summit, but evacuated to the rocky bwlch or bealach just a bit East, and then, after destroying a banana by consumption, we toiled up the slopes of Moel Penamnen, our first Hewitt of the day, where we saw nothing but mist and a couple, the female of which said that Bruno reminded her of her departed pooch, the three-legged huntin’-hound Zero.
We tarried not yet again, but hurtled off on a kind of bearing over blank moors to Foel-Fras, where a bit of a view appeared for a while – some lochans under the mist – Llyn Newydd and Llyn Bowydd – reservoirs for the quarries.
We lunched on an island of rock in the heather and bog.
Afterwards, we slithered up to Manod Mawr North Top, followed by Zero’s ex-mistress and her partner where the clouds parted and a big view appeared.
The descent from this top to get to Manod Mawr is barred by a great big hole or quarry and any attempt at a direct traverse would end in ripped trousers and lost fingernails at best. Quarry tracks are the key, and these eventually lead the walker and his loyal pooch through the piles of slate to the moor leading up to Manod Mawr itself. Our third Hewitt and the today’s Marilyn.
Here, the mist closed in again and so it was blindly that we trotted down the hill to Llyn y Manod and a climb up Manod Bach in failing light. So that was little manod and Big Manod both bagged. Quarry tracks and an ancient incline took us easily down top Bethania for a short road-walk lead back to Blaenau, where a drunk at a bus-stop seemed to say something about monkeys to me…..?
Thanks to the ordnance survey for splitting this walk over two sides of a 1:25k map (dhuhh)
Its always foggy at Blaenau, it seems to me, and for a town in the midst of such baggable hills, it seems odd that there isn’t a place to buy a cwmpass or even a pair of socks. But the place is friendly enough, and, with its surrounding crags and quarries, its probably one of the most distinctive towns in Britain. You always know where you are when you’re in Blaenau.
10 miles and 3400 feet done today.
Posted by Mike Knipe at 15:36