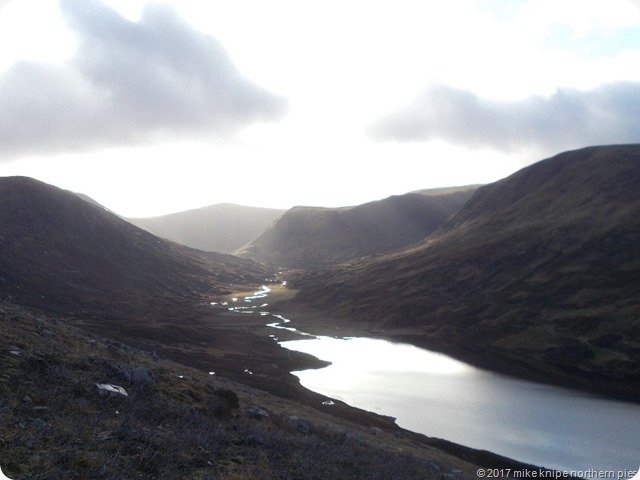 With incredible generosity and forebearance bordering on recklessness, the Fight Club Hikers were allowed a weekend stay at Callater Lodge.

Many TGO challengers will have happy, perhaps hazy memories of evenings spent at Callater Lodge as they’ve been extending hospitality to challengers for thirty years or more before walkers progress to wherever it is they intended to go next.

For those who don’t know, its a three mile walk from the main Braemar to Perth road and, in the pastm was often occupied by Bill and Stan who provided a warm and friendly welcome to TGO-ers passing by. I’ve been there three or four times, I think. Unfortunately Stan died a few years ago, but Bill has continued the tradition with support from Jeanette and several other Aberdeen/Aberdeenshire individuals. It has long since become a rich and important part of the TGO challenge. 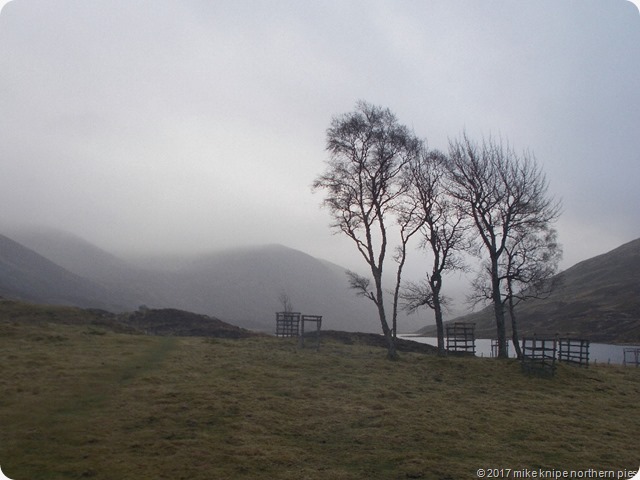 So, it was a privilege to visit “out-of-hours” as it were. There were five FCH peeps and Masey’s dog Pepper. I didn’t take LTD since there’s a resident Rhodesian Ridgeback who is a bit nervous and LTD can be a bit of an arsehole with other dogs to be fair and he hasn’t yet been defeated in a canine show-down. But this dog could well have been LTD’s nemesis. So he stayed home, hiding from the fireworks.

I met Masey in Braemar and, armed with some fine but expensive steaks from the Braemar butcher’s shop, we met Paddy, Gill and Cory at the start of the track to Callater and wandered up there in the dark. Bill welcomed us at the door. 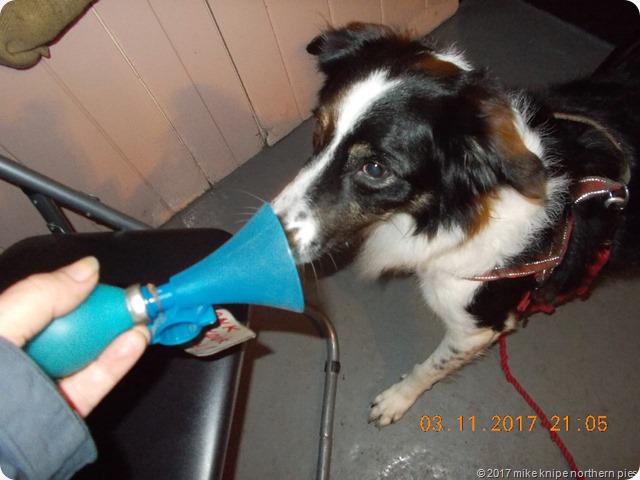 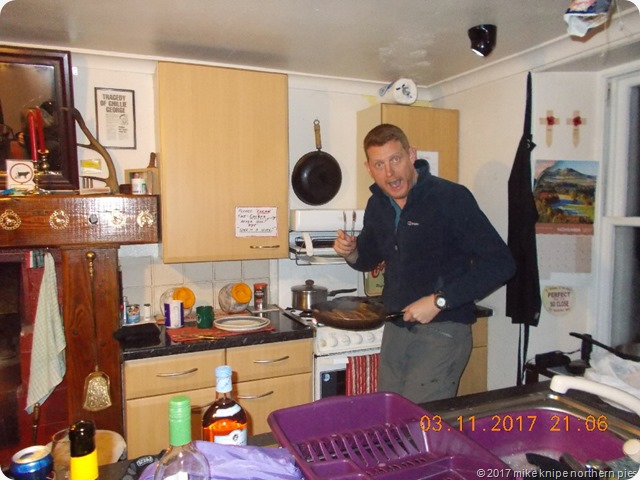 Friday night, Masey cooked the steaks, Pepper threatened a squaky horn and the evening was was spent sipping jinkies in front of the fire.

On Saturday, I went off to walk the ridge which leads towards Braemar, with a shopping list for more plonk and scotch to be brought back to the lodge from the shop in Braemar. 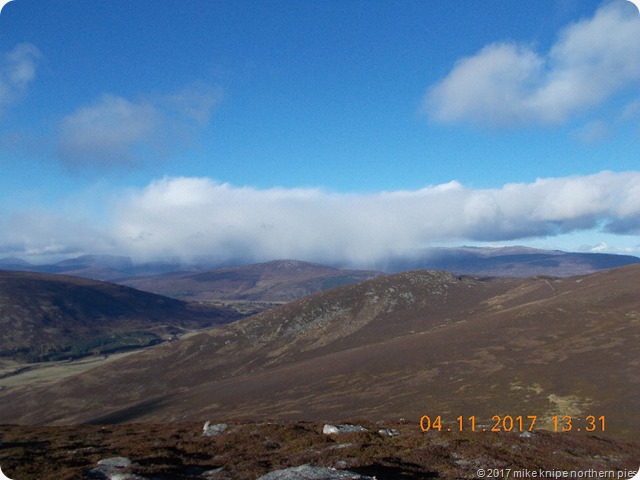 The ridge is gained from the path to Lochnagar and is rough and heathery low down but stony and mossy high up, which provides for some fast and easy walking. I managed five of the six 610+ metre tops – Creag an Loch 836m (it has a lochan) , Meal an t-Slugain 849m, Creag Loisgte 795m, Creag nan Leachda 784m and Millstone Cairn 743m, dropping down to Auchallater on the main road to take the knipemobile shopping. Together with the walk back from Auchallater, it was 16km and 800 metres of up.

In cold, clear, sunny weather, which is what I got, this is a fine little stravaig. And the first flakes of the winter’s snow landed on me as I lunched, hunkered down out of the nither on the summit of Creag Loisgte. 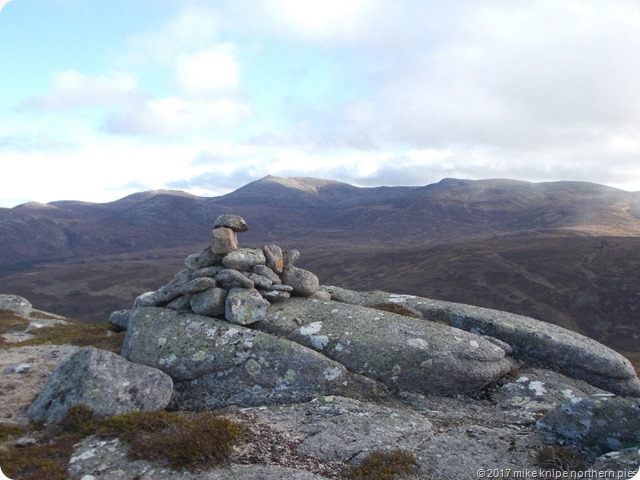 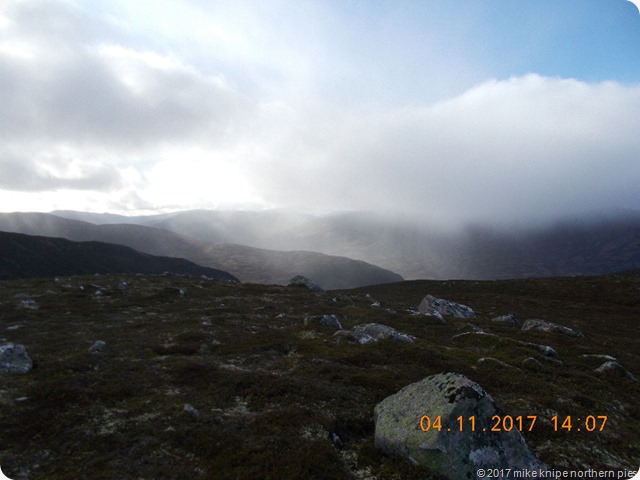 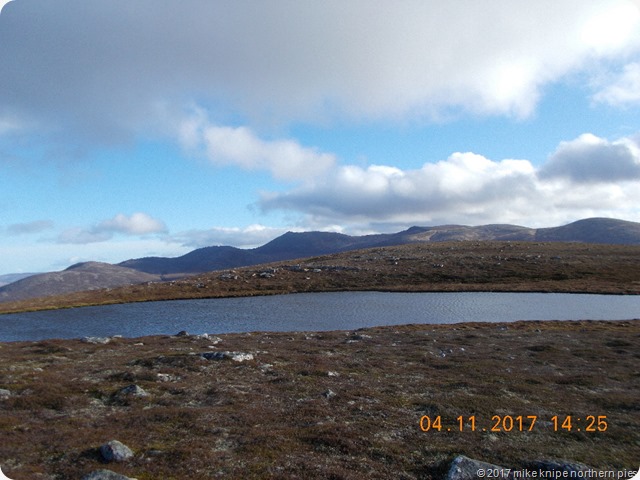 The remaining FCH-ers went off to bag Cairn an t-Saigairt Mor, a Munro on the way to Lochnagar.

On the Saturday, an Aberdeen walking group arrived, including a few TGO challengers and Jeanette provided a fine evening meal and brekkies the next morning. 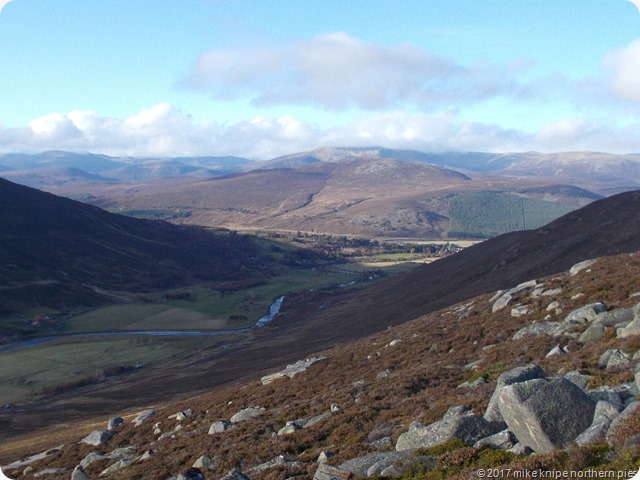 Callater Lodge is substantially maintained by the efforts of Bill, Jeanette and a few local stalwarts and many TGO challengers will have slippeda note or two into their collection tin. This will go some way to providing heat and fuel. But what they really need at the moment is a gas fridge. There’s no electricity, so an electric fridge would basically just be a cupboard. TGO challengers who enjoy a drop of milk in their tea, or who may prefer a chilled beer may like to reflect on the hopitality and, indeed, help, provided here going back into the mists of TGO challenge history. And they may consider a small donation to be just a symbol of TGO challengers’ affection. If anybody were to send such a token to me I would ensure that it’s passed on to Bill and, maybe, next year, there’ll be a swanky new piece of white goods loaded with sustinence for passing Challengers. Gwan. Do it. Email me at mike.knipe@btinternet.com for the address. Trolls, time wasters and eejits in general will be hunted down and “reprimanded” by Fight Club Hiker agents.

Looks as if you had a fine weekend. There is some lovely walking around there.