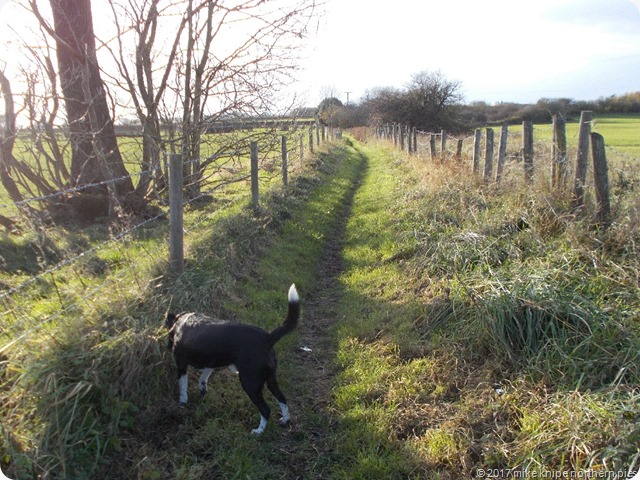 I spent most of the morning and into the lunchtime snoozing, watching the street from a bedroom window or murdering a squeaky squirrel who thoroughly enjoyed the experience, I expect. Eventually, after the postman had been with some new toys for The Lad, he put the lead on and orf we jolly well went into the nithering northerly blowing from somewhere even colder than here with ice and big white bears and eskimoes and stuff. Nice to have the fire lit back at Pie Towers 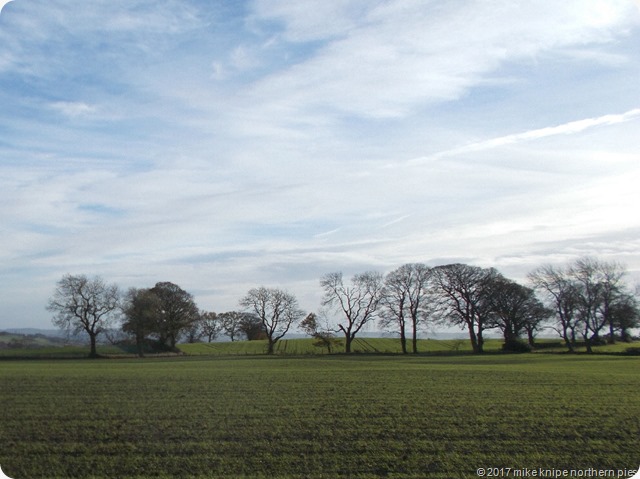 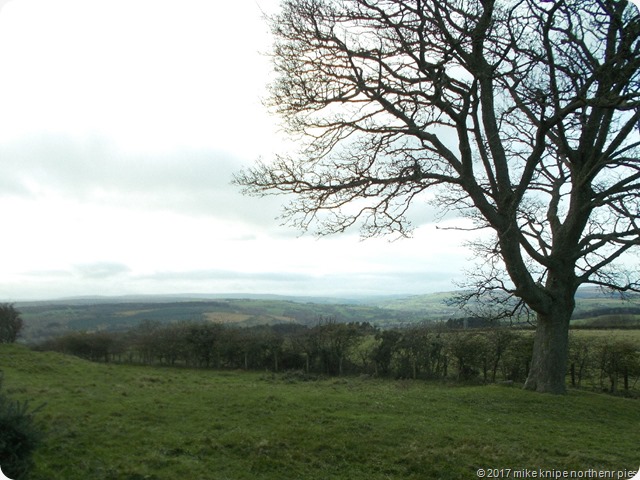 Today’s trundle was up through a few narrow lanes and quiet roads to the highest point to the immediate West of Crook – Cold Knott – 259 metres above sea-level and with a cracking view of Weardale and bits of the North Pennines where, it seems, having not enough grouse to shoot , the local gamekeeperami are occupying their time by setting fire to the moors.

And then we did some more lanes and bits of woodland, some sheepy pastures and into Kitty’s Wood. 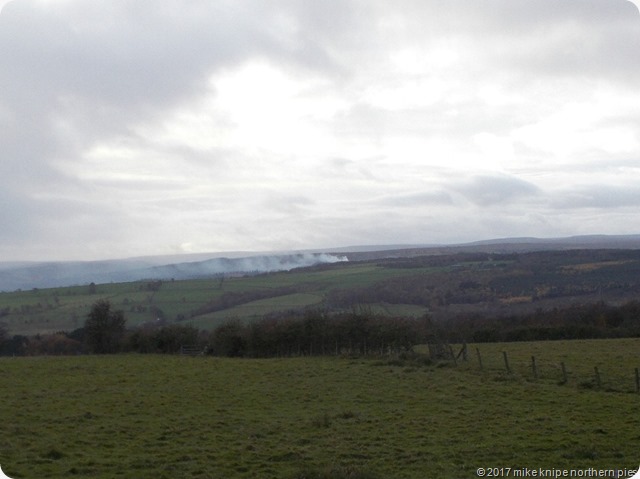 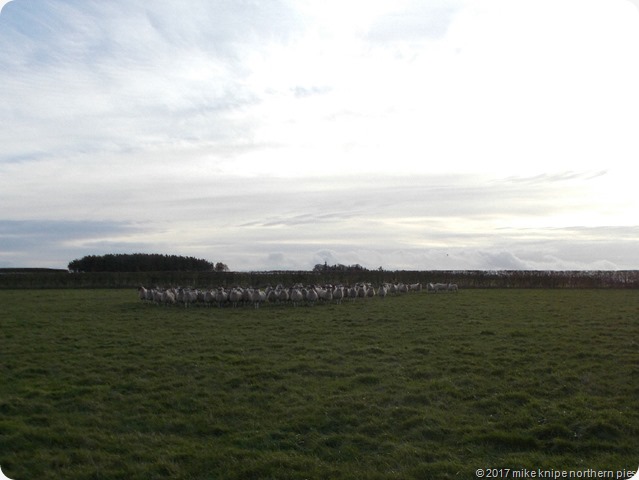 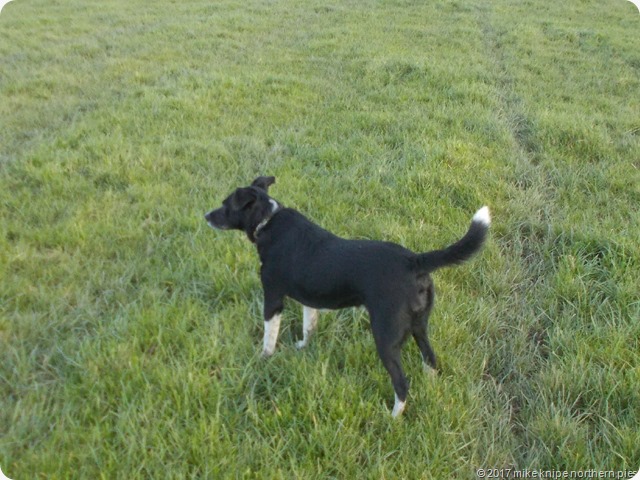 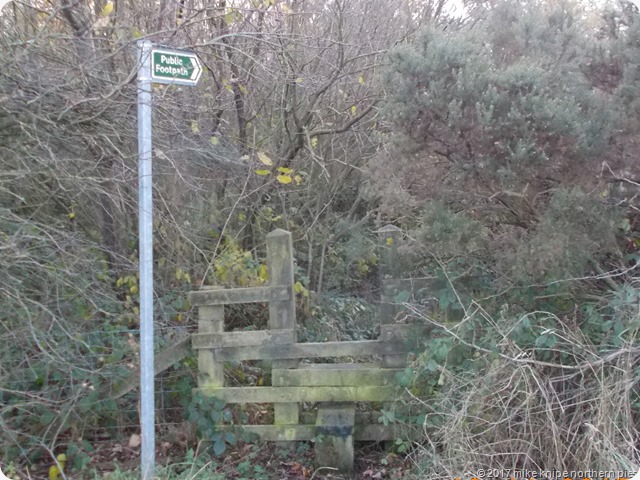 Most of this area has been seriously dug up over the last 100 or so years, specially the places on the way to Cold Knott where huuuge holes were dug in the late 1980’s to get at the coal underneath and, also in Kitty’s Wood, which was the site of part of Roddymoor Pit and, if you dig a small hole, like I enjoy doing on occasions, you’ll find lots of ash and clinker and not much soil. Roddymoor Pit was a massive industrial complex employing 3000 men at it’s peak. It had railway sidings, the coal mine producing high quality coking coal, a benzine works which the Luftwaffe attacked but missed and a brickworks producing signature cream-coloured bricks with the word “Pease” stamped in them and which appear in most, if not many of the old houses throughout Crook. It closed in the 1960’s and the place was landscaped, including a 200 foot high smoking spoil heap and was substantially planted with trees. Following a campaign by locals, significantly those living in Roddymoor, seven new rights of way through the woods were established a couple of years ago. So, it’s a busy place for dog walkers, kids on bikes, Ray Mears wannabe’s and teenagers having late-night boozy parties. Most people agreed that the pit’s closure was a bit of a bugger, specially when the other big pit closed at roughly the same time. Thus the men of Crook were to “enjoy” a period of leisure, so it’s no wonder that many got a bit miffed when new owners of Kitty’s Wood recently tried to prevent access. 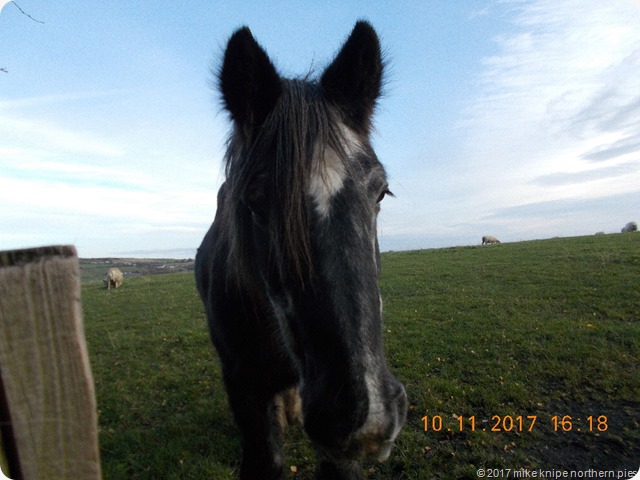 Only a few doggies out today – just one of those little Tricky-Poo fancy, barky little feckers and a greyhound who was a bit nervous. Other animals were some sheep, some horses (quite a few horses as it happens) and a donkey. None of these were specially threatening.

Exciting stuff, so much history, makes one paws for thought!

Since you've been writing the blog it has vastly improved.

Miles better. We didn't intend to be Anonymous!