Raspberry Tripping - Yorkshire’s Eiger or Matterhorn or Something 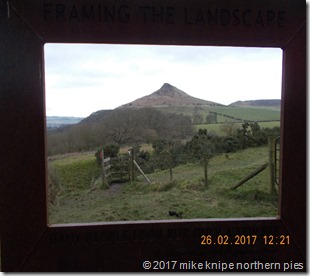 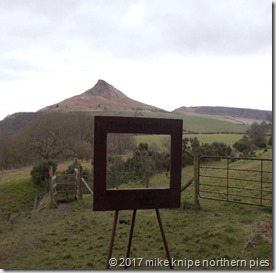 The other day, when the wind from the drifting icebergs just off Newfoundland nithered numbingly over the high Pennines, me and LTD did a well wrapped-up circumnavigation of Wrongberry Trapping, an apparently pointy swelling just a bit to the right of Middlesborough. 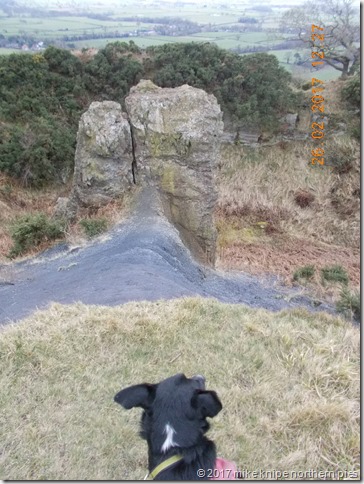 We began, not by assaulting the beetling West Face with it’s crocodile of families, dogs and assorted yoofs, but by heading South for the Very Lovely Cliff Rigg, an interesting little hill sporting both a disused open pit and an SSI. The hole in the top (also known locally as the Elephant Hole) was originally for the digging of a dyke of Whinstone for stone setts. The hole has a little pinnacle which the adventurous may try to climb. Whinstone is volcanic. Just sayin’ so you know. (Whereas Ramberry Splitting is hard sandstone cap protecting softer shales and other rubbish from wearing away) 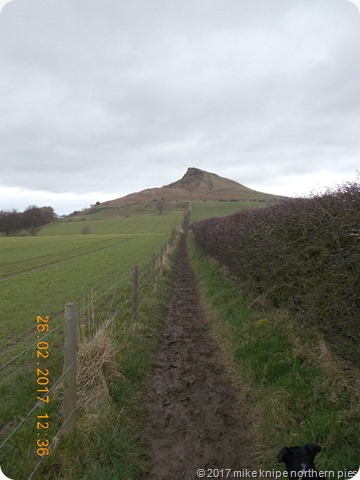 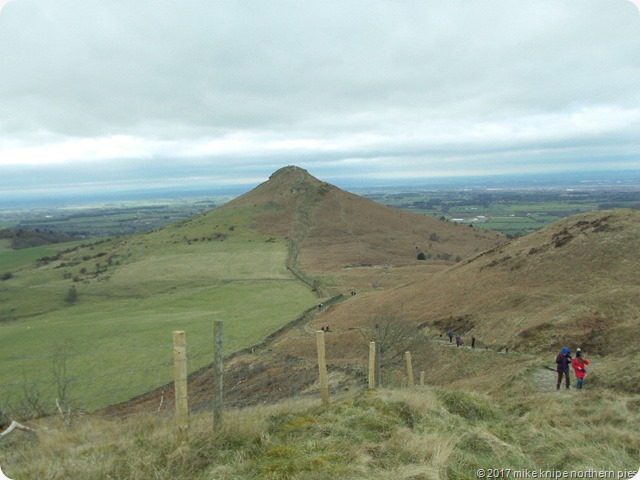 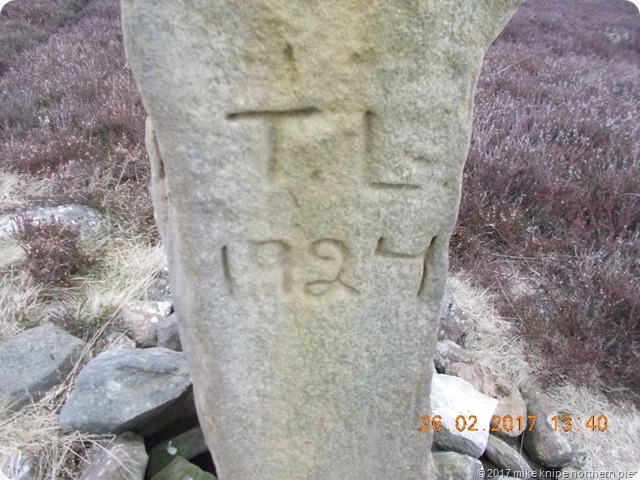 We progressed on to a permissive path followijng the line of a tramway built for the nearby ironstone mine (it’s full of geology stuff round here innit?) and then joined the processions of people and their dogs for the bagging of Great Ayton Moor. Great Ayton Moor is a rough and heathery grouse moor on which dogs are apparently not welcome. We tried to follow a right of way to the top, but its pretty much impossible to follow the exact line. The top has a standing stone with 1927-dated graffiti and some older marking which are obscure. LTD cocked his leg on the markings to indicate his opinion of them.

And then, by a roundabout route, we finally climbed Blackberry Prodding by the stone-setted zig-zag route round the back. It looks hard from a distance but, in fact, it’s only 90 metres and the top is soon acheived just by keeping plodding uphill 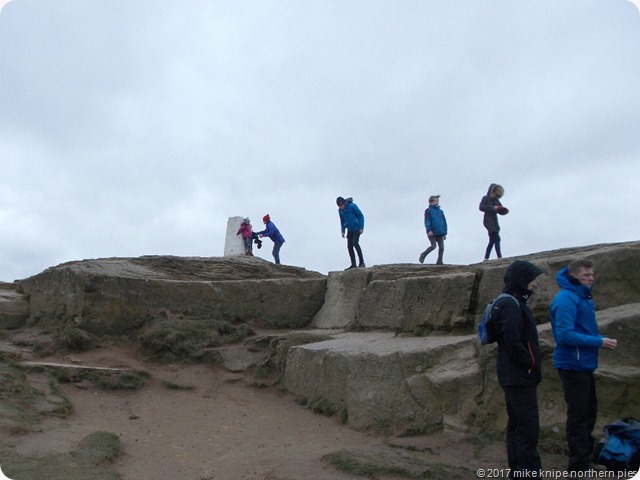 The summit was windy of the type of windiness that makes it hard to stand up or, indeed , to spark up a Benson and Hedges and it was also occupied by large numbers of wind-blown walkers, children and dogs some of whom were really enjoying having their hair disarranged by the elements and some of whom were a bit nervous.

We descended the steep side, accompanied by budding juvenile mountaineers who were using traditional methods of descent – aux gluteus and/or running hell-for-leather without being able to stop. As I was embarrassingly dressed as a “propah” walker, my delicate tip-toeing and nervous probings of the slippery bits whilst trying not to over-balance paled against this rumbustious cautionless display of mountain-joy  so irritatingly displayed by these youngsters. I meantersay, what had their parents been feeding them? I was like that once, y’know. Fifty years ago. Before I hurt my leg…. 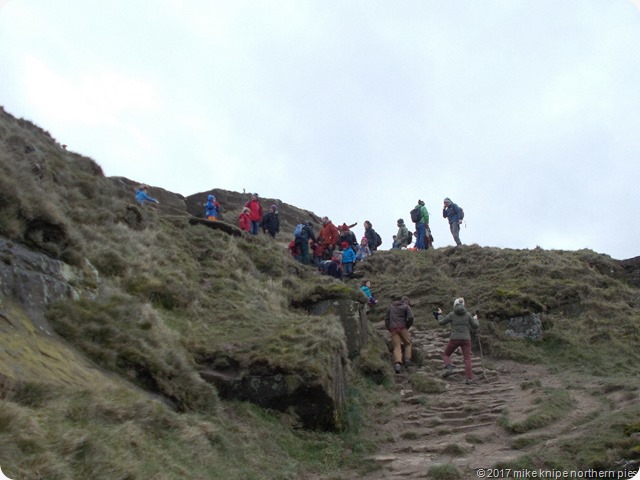 The jollities were continued lower down the slopes where a group of young lads had brought sledges and were sliding the outrageously slippery mud-slopes. They looked like they’d been in a thrilling February rugby final mud-fest against a team of crack public schoolboys. Clarty is the word.

We left just before it started raining.

Bloomberry Crapping is a cracking little hill for kids, I have to say. It looks bigger than it actually is and it’s very very popular. Don’t go there if you’re seeking quiet contemplation. The place is heaving and when me and LTD were there it was quite noisy with children enjoying themselves. I should take some gradnkids there I think…

And there’s a pub at the bottom which allows the entry of families, walkers, cyclists, dogs, in fact,it seems, just anybody.

Looks like you had fun, just think, sledding down in in thick mud!!

Eee, my childhood all coming back to me. Just imagine this little tomboy of a girl hurling herself all over the place, back in the early 60s.....

Over the Hill said...

My daughter went walking in the Carpathian Mountains (Romania) last summer - did lots of preparation, including buying some very swanky and expensive walking books. Was then slightly taken aback , when they set off into the mountains, to find crowds of holiday-making Romanians scampering alongside them, in trainers and sandals!