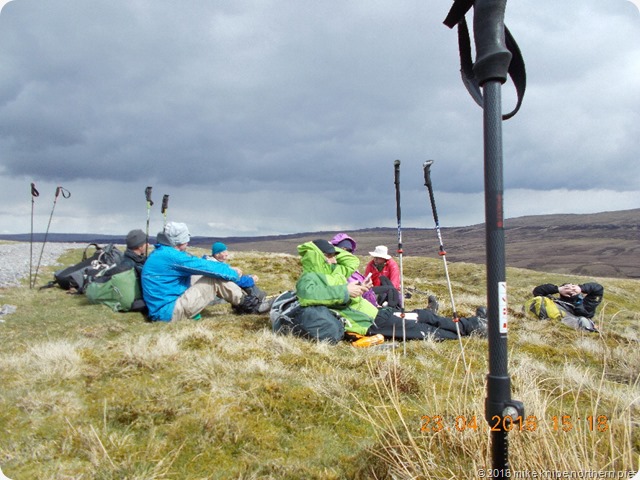 When we left our derring daunderers in the previous post, they were settling in for a nithering night somewhere not all that far from the source of the River Tees. The next morning, needless to say, was frigidly frosty but beautiful. LTD was reluctant to emerge from his stink-pit till the sun started to warm up the akto. And so was I. 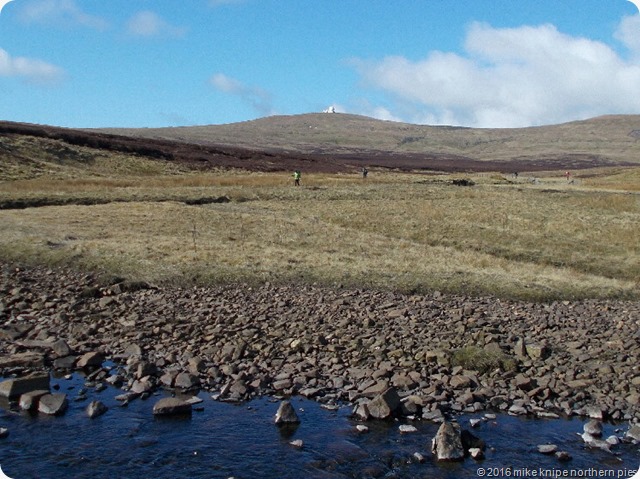 But Things Had To Be Done and we all set off at roughly 9:00 am for the march to Cow Green. Some went on the North side of the river and some (including me and LTD), on the South. Our RV point was to be the Moorhouse NNR entrance near Tynehead.  Alastair and Jamie carried on for the bagging of Belbeaver Rigg and Viewing Hill, two handy Nutalls on Alastair’s List Of Nutalls Still To Bag whilst the remaining 8 blundered on through the tussocks and tracks to the little bothy/unlocked shooting hut near Cow Green which provided a brewing shelter from the nithering breeze drifting off an iceberg just this side of Greenland. 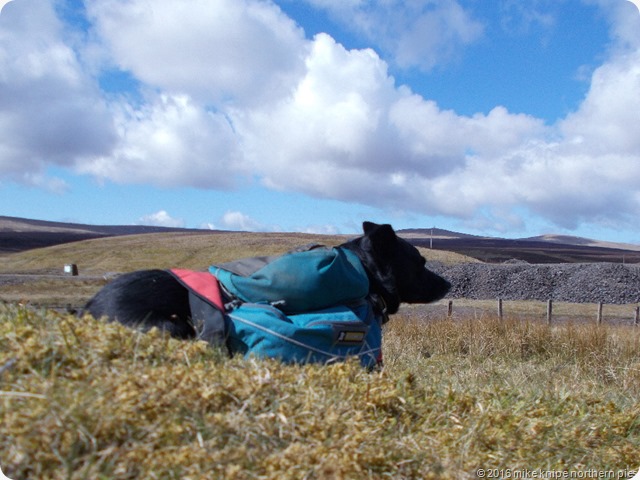 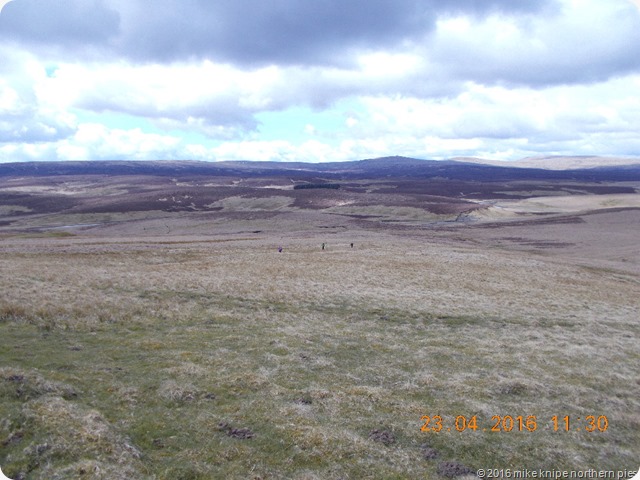 Reunited we wandered down to Cauldron Snout to join the Pennine Way back towards Dufton. The original plan was to camp just inside the military training range but clearly the army were being a bit sniffy about this, so an alternative camp in the limestone gorge just to the right of High Cup Nick was selected. It became obvious, though, that there would be other camping opportunities beside Maize Beck and, by 4:00 p.m. we’d found a comfy spot beside a little waterfall and popular skinny-dipping spot which would do nicely. It was much too cold for any kind of river bathing, though. 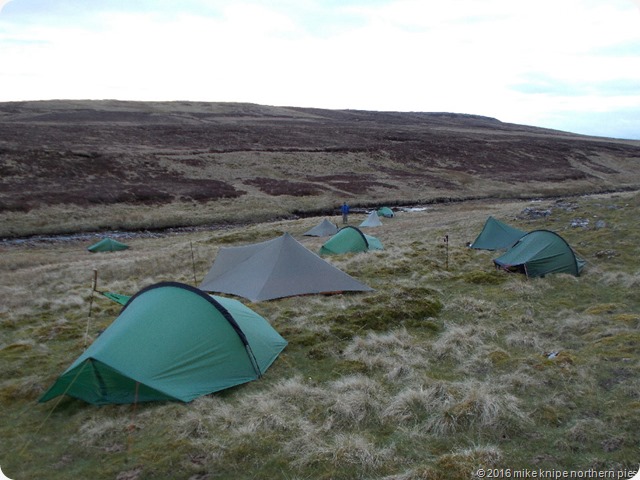 A convivial evening ensued. I visited a few tents and was shorlty followed by LTD who I thought had been well tucked-in for the night and seemed settled and immovable underneath his thermal blanket and my cosy jacket. 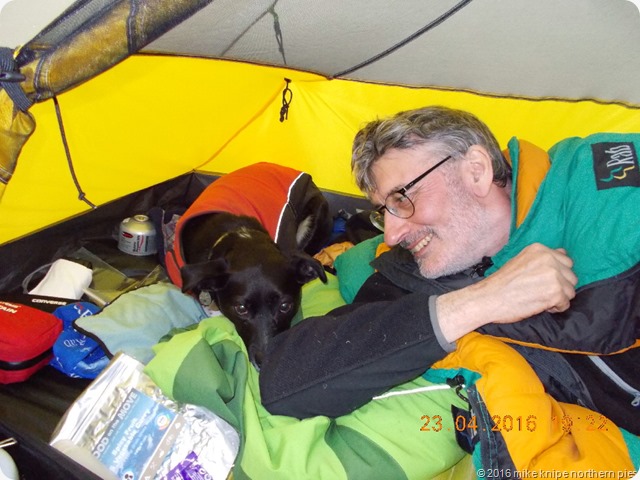 So we visited Mr Sloman’s tabernacle where he helped Alan in the safe disposal of the substantial remains of a chicken curry. LTD does enjoy teamwork and the cleaning up of remains of scoff from dehydrated meals packets is his specialty. He tends to emply his very efficient and sloppy tongue at an atomic level and in this way, the rubbish bag stays much fresher, specially on multi-day walks, any empty packets being clinically clean. 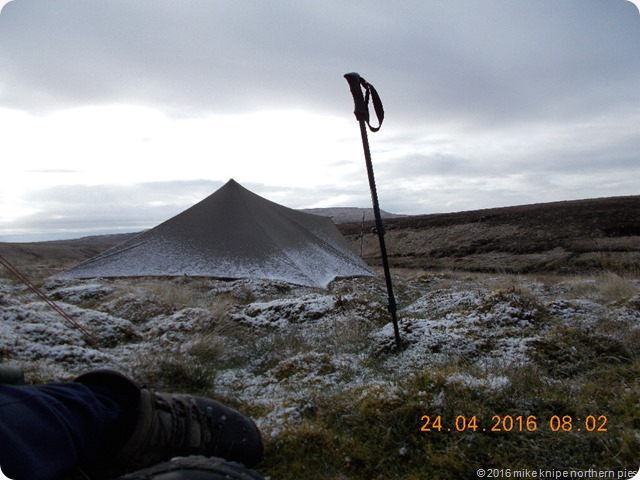 Overnight there was a bit of snow and it was still murky and snowy in the morning. Andrew reported that at one point the night was starry, moonlit and beautiful. But I missed it. I always miss these things. Another 09:00 start saw us complete the walk back to The Old Post Office tearoom for breakfast, joined once again by Mr Morpeth. On the way, of course, we passed by High Cup Nick where it was still snowy and quite misty. This added a bit of atmosphere to the place, but, maybe it would have been nice for those who hadn’t been there before to get a proper view. 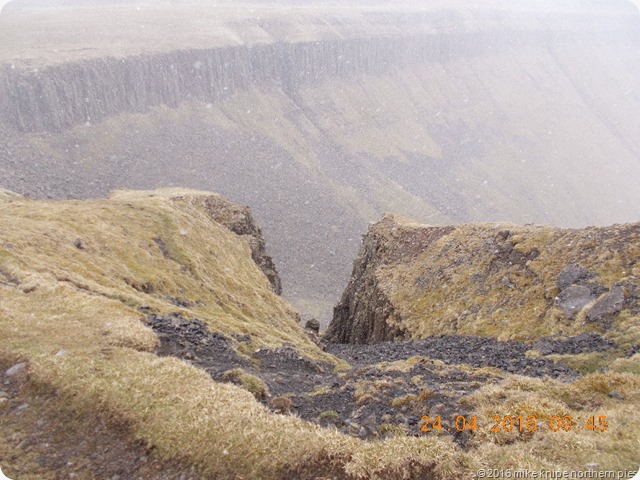 The whole walk was a bit over 30 miles in two and a half days. And the North Pennine landscape is the only bit of England with anything like the scale of things a bit further North. And, much of the time it was at it’s best with wide sweeps of fell well ventilated by cold North winds and big, sunny views. 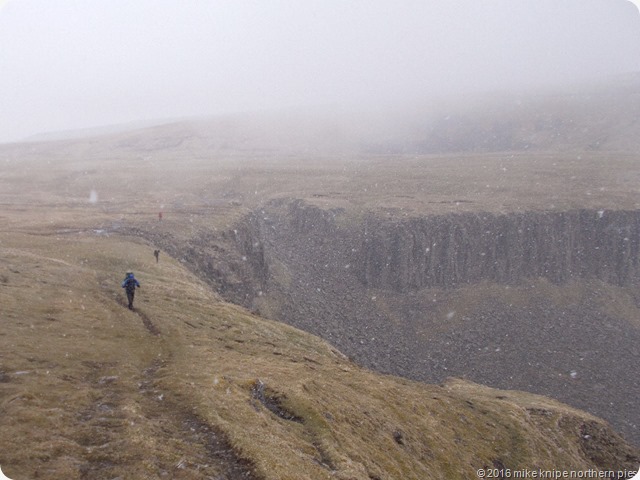 And it was a lorra lorra fun. Lucky The Dog enjoyed being in a bigger pack than usual and worried a bit when the group split up or temporarily drifted apart and would have gone to try to round people up had he not been on his lead. 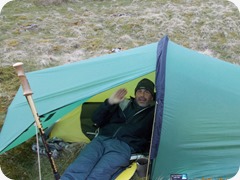 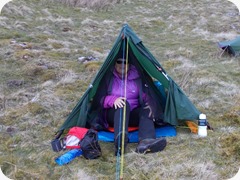 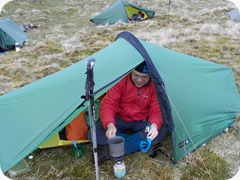 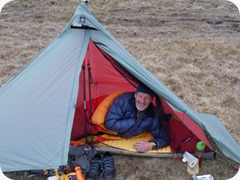 And it was really nice to meet old friends from the TGO challenge. (Even the chap who pinched one of my slices of toast – you know who you are. Your Dad works for the Council, innit?) We only meet once every few years and when we do, it’s often in some remote and unexpected spot. It’s made me want to have another go at the TGO. Probably next year. I have a route.

Thanks to Alan for the invite. Hopefully, this post will look less horrific than the previous one (!) – I’ve added a few pics of people who seem to be enjoying themselves….  hope this helps…..

Good luck to those on this year’s TGO challenge. Me and Lucky and Dawn are off to do some Beer Trekkin at TGO chally time. (Dawn will likely have soft drinks). I’m not confident that either of us are fit enough for this but if we don’t set off we’ll never know. And I have train tickets for Buxton.

Aw, that look between Alan and Lucky is pure love!

Looks as if you all had a fantastic time. It is good to see Lucky kept an eye on one and all.

Thank you for coming, Mike, and an even bigger thank you to Lucky for polishing off that Chicken Curry that I had carried all day.

Lovely pictures. The Northern Pennines look rather shapely girls from the comfort of my chair.

If thats a P bottle next to Andrews water bottle he should go visit the quack when he gets home.
Don’t you just love the English Summer weather.

|Alan - Let Andrew drink whatever he wants. He claimed it was pineapple juice. It has an antiseptic effect, apparently.