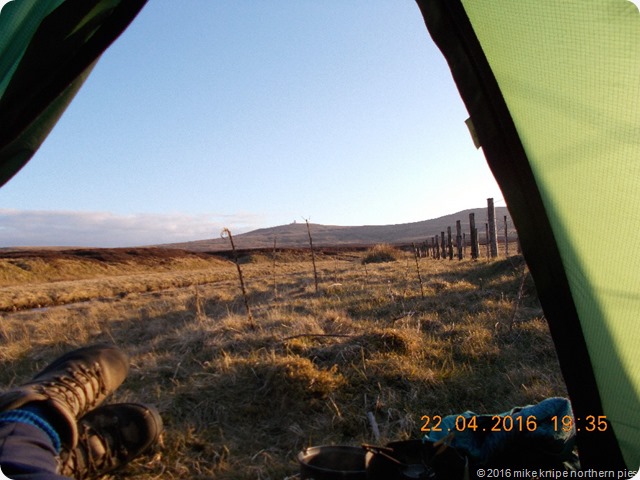 Each year, just a bit prior to the TGO Challenge, Alan Sloman arranges a couple and a half-or-so days wandering and camping as a sort of shake-down for the main event. And this is the Daunder. This year’s daunder was to begin at Dufton, head over Cross Fell, around by Cow Green and back via High Cup Nick and me and LTD attended along with ten other daunderers, all experienced and Fully Qualified TGO Challengers and backpackers extraordinaire. Except Lucky who is a dog and dogs aren’t allowed on the TGO challenge. And I’m not going this year either and neither is Pieter who came all the way from Holland to join the Daunder. 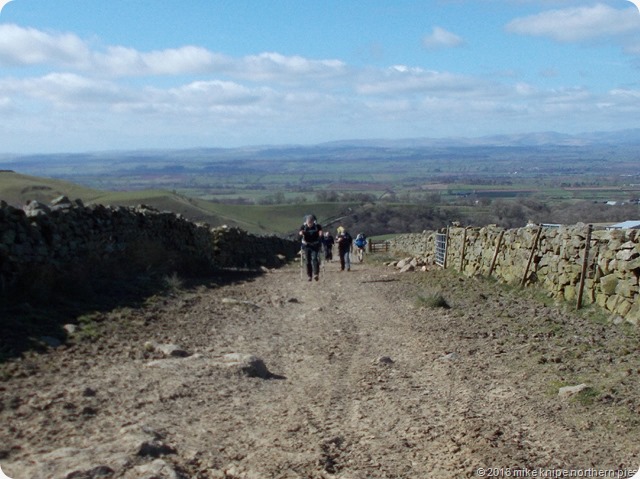 After a coolish night on Dufton campsite and a night in The Stag where scoff and beer was taken, we set off hopefully in bright sunshine up the Pennine Way towards Scotland. 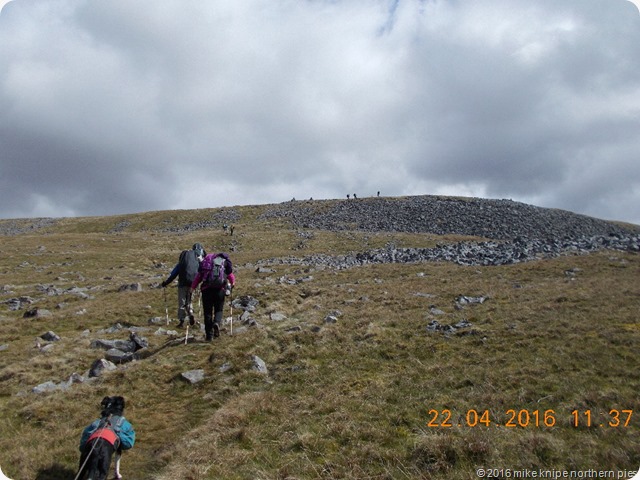 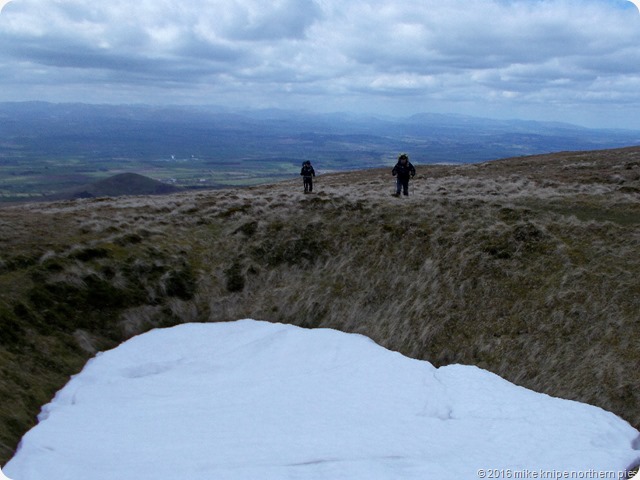 It must be admitted that the first part, of the walk was a bit of a heave up many, many contours towards Knock Fell. Veteran Challenger Morpeth dropped out at this point having struggled a bit with fitness following a triple bypass. Some readers will be aware that I have just the one stent in my cardiac wotsit (apols for the medical terminology here) and getting back enough fitness to contemplate even a much easier slog than this was a struggle for me. And my op was bugger-all compared with his. TGO challengers tend to have a high degree of determination, though, so the prognosis for hillwalking is hopeful, I would have thought, though it might take a while. 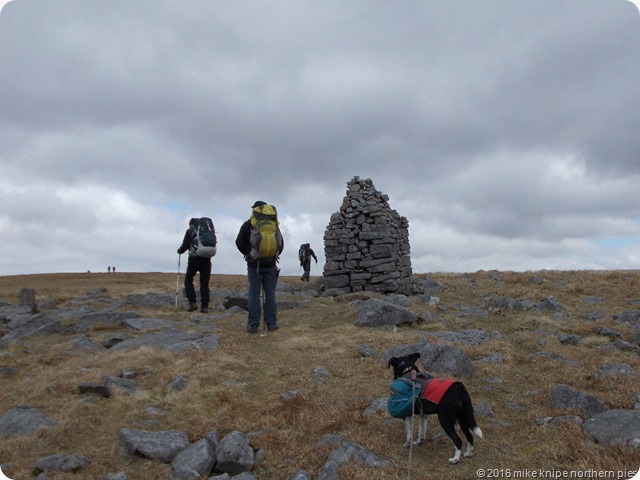 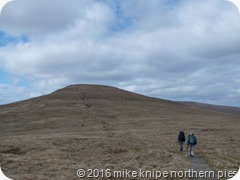 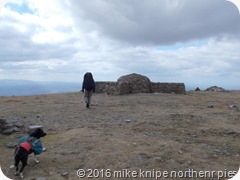 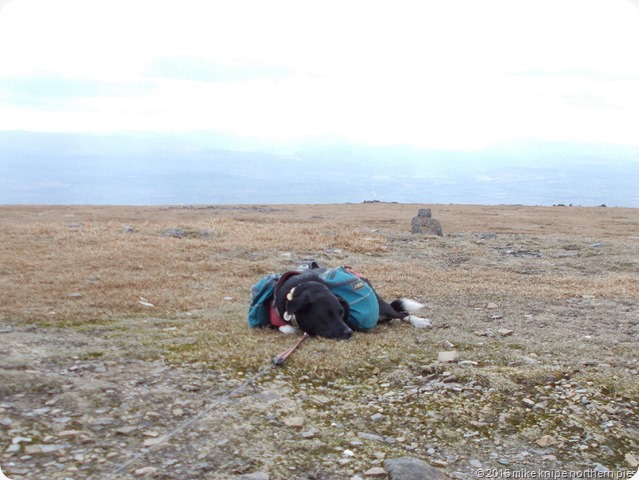 So, Morpethless, we struggled on up to Knock Old Man and along to the road to Great Dun Fell radar station where we were almost mowed-down by a cyclist who turned out to be Alastair’s pal. They stopped for a chat whilst others ground out the climb up to the radar station and then onwards over Little Dun Fell and finally on to Cross Fell for a long break in the shelter at the top. LTD started to look a bit knackered at this point, having pulled me most of the way up. Never have a hillwalking dog walking to heel. Their job is to tow not to follow.

We had a brew at Gregs Hut and then, after a few more km of the Pennine Way, turned off to find a camping spot on a nice, wide strath by the River Tees. We’d done 12 miles and 3300 feet of ascent. This is quite tough for a Daunder, I believe. 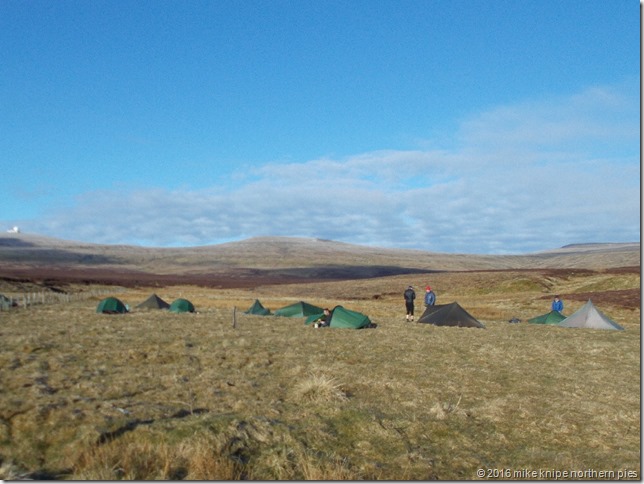 After dentastick, bonio and kibble, LTD snuggled into his cosy bed as the sun went down. The tents began to ice up almost immediately. My water supplies froze. It slowly went dark.  A beautiful moonlit night shivered outside my akto. But I had a hot water bottle in the shape of a furry Christmas reindeer (I got it for Christmas!) and also my toasty It’s-Not-A-Onesie with the Union Flag pattern wot I got from Bernie’s at Ingleton.(It’s an under-a-caving-suit-suit.)  And, despite the temperature descending steeply to minus stupid,  inside a heavy 4 season sleeping bag, I was too warm (!). Lucky got very close during the night and performed running-whilst-asleep, a kind of puppy-style barking whilst asleep and a series of heavily perfumed but silent gas attacks whilst asleep. 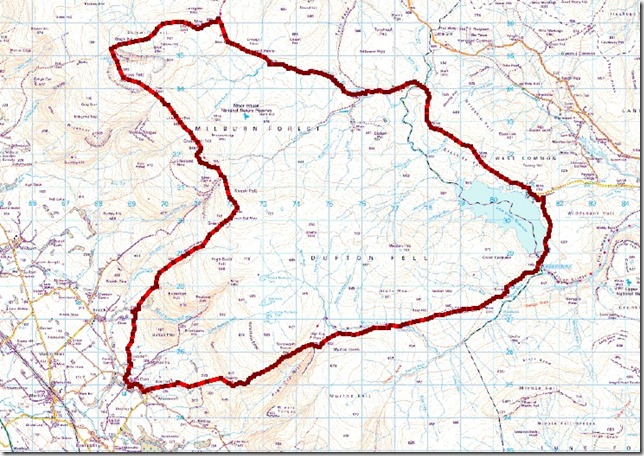 I hope Morpeth was okay, did he manage to meet up with you all later?
Nice trip BTW!
:-)

Looks like you had a brilliant time Mike. A pity dogs are not allowed on the Chally, Lucky would do well.

John - Morpeth seemed OK in the café at the end. These things take a long time and most peeps with a triple bypass wouldn't be capable of doing the distance/ascent that he did.
Dawn - I'll have to take Lucky on a tour of English pubs instead!
Alan - Yes, unusual to have a daunder with no pubs in the middle. We were forced to carry our own rations. These did get lighter as the walk progressed...

That all looks utterly ghastly, Mike.

I remember that section of the Pennine Way well. Poor Dixie developed a limp on the uphill slog and needed a rest day afterwards. We had lovely, sunny, summery weather though, not cold, frosty, snowy stuff.

Alan: I blame the photographer. Lucky is very new to digital
Chrissie: Poor Dixie... I used Lucky as a sort of canine tow. He didn't seem to mind although he was pretty knackered at the end.