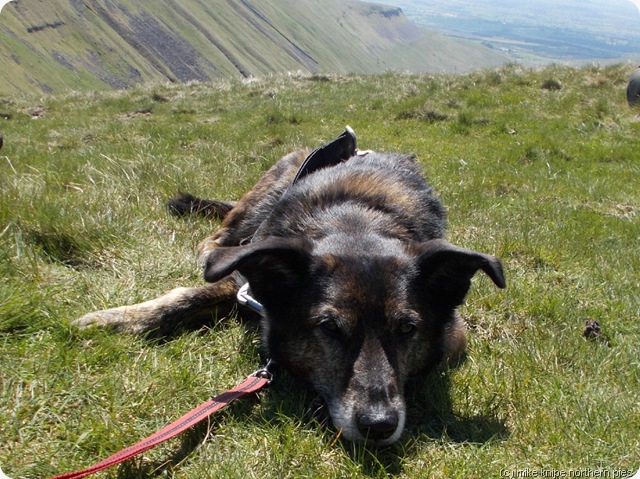 Maybe it’s me. Maybe I’m on a roll of medical emergencies or something, but this walk ended with yet another of my walking partners being shuffled off to hospital in the company of paramedics. (Todays paramedic was much better looking than Dawn’s paramedic on the TGO, though, I have to say…)

Anyway, more of this later. (Not much more, we wouldn’t want to break patient confidentiality here…) 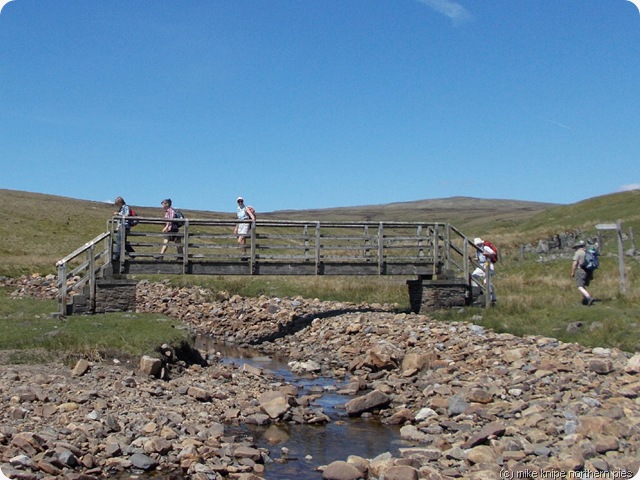 Today’s walk was arranged some time ago and was a result of a conversation with Nurse Kathy during which it was revealed that a certain individual was charging £25 to guide people to High Cup Nick from Cow Green and I said I’d do it for nowt. And so, a  following further discussions amongst leading lights of this informal group , a  new walking group, it appears, has been formed. And more of this later, too. 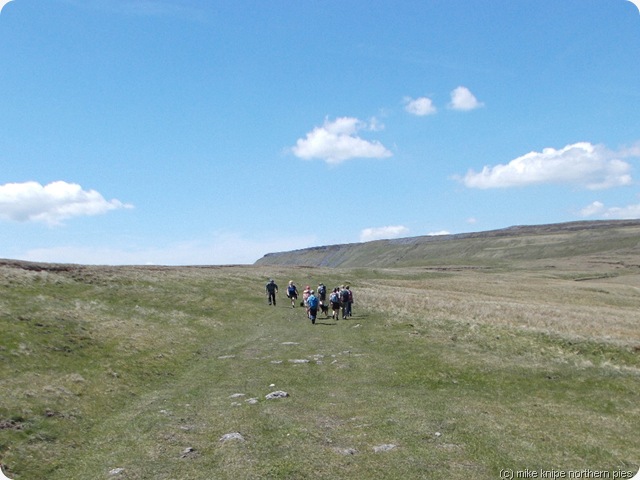 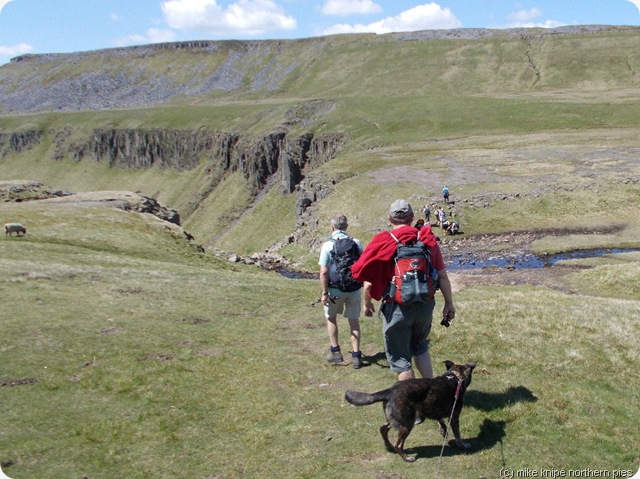 Fifteen of us met in outrageously bright blue early summer conditions in the car park at Cow Green. The party included two dogs – Dot, a  small , furry, fun-filled Jackadoodle and Superdawg who made the mistake of trying to run around after Dot and had to be put back on a lead before he did himself a mischief. (he’s an ageing dog and too heavy to carry over the moors should he run out of steam, showing off after this little floozy). The son-in law came just as far as Moss Shop Mine, so we were down to fourteen. 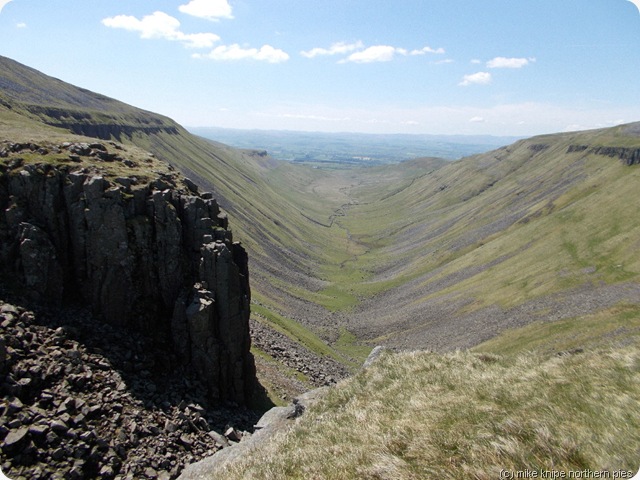 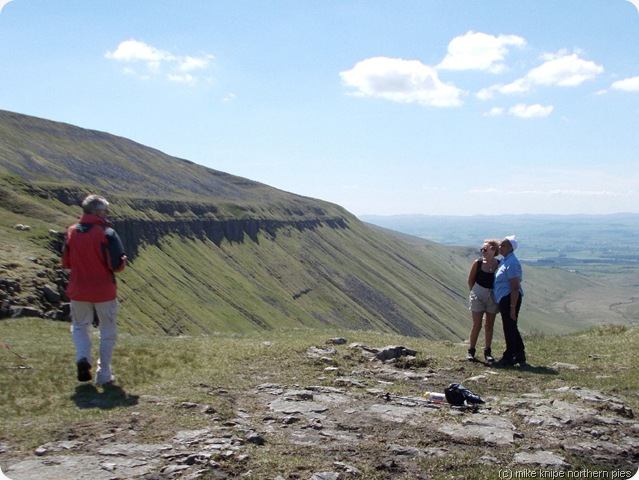 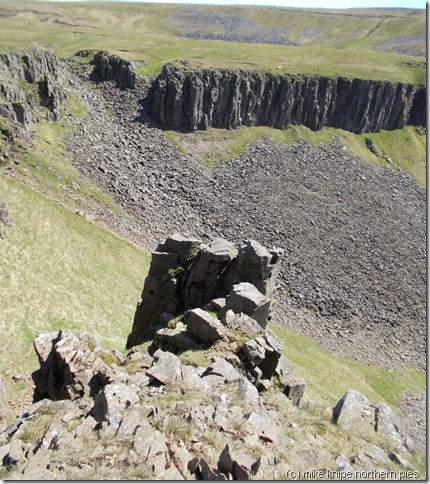 We hurtled over the Pennine Way to High Cup Nick, which appeared, as it does on this walk, suddenly as a huge chasm below your feet. We lunched. There were souvenir photos (don’t step back!) A small breakaway/splinter (what’s a splinter of a splinter?) group returned the way we’d come and the remainder did the small loop that includes the old Pennine Way flood route via the limestone gorge. And, so, now down to ten, we plodded back the way we’d come. This is quite high wastage, I have to say, although the split of the splitters was tactical rather than the result of a spat. 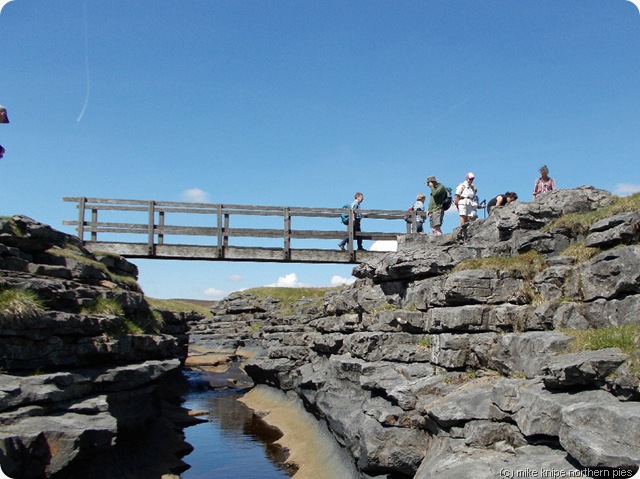 Soon, cars were gathering around the Langdon beck Hotel, where a meeting had been declared. I arrived to find one of the party in a state of semi-collapse and in the process of having a medical emergency. Nurse Kathy stepped in a ministered – making the sensible decision to call an ambulance. And so, Pieman’s second medical emergency in three weeks ended with our patient being driven off towards Darlington. 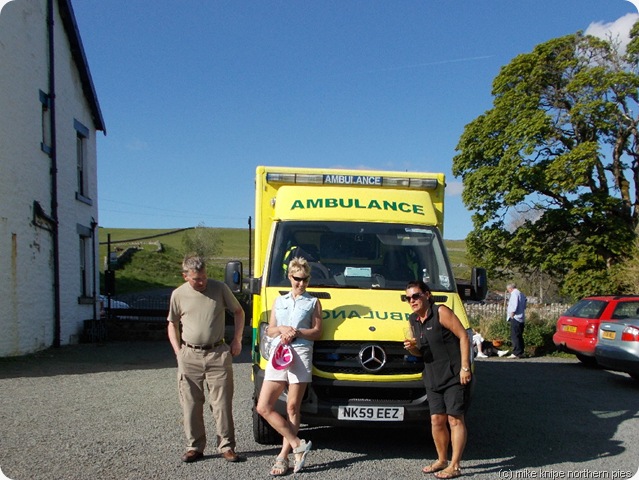 But the new walking group formed and it’s policy is to walk once a month on Wednesdays whenever the Durham County Council walks programme has a suitable gap – suitable being either no walk at all, or just a shortish one. These splinterers need mileage. They need to feel stiff legs and achy knees on Thursday mornings. they need a good excuse for a post-walk pint (or whatever). And the walks won’t necessarily be constrained by County boundaries. “Splinterers” isn’t the name of the group by the way, but I’ve forgotten what it is… I have a notoriously poor memory for…..er……

Superdawg may be in lurve…

Despite the warm conditions (what did we do right…?) there was still a small patch of snow in a gully above High Cup Nick. 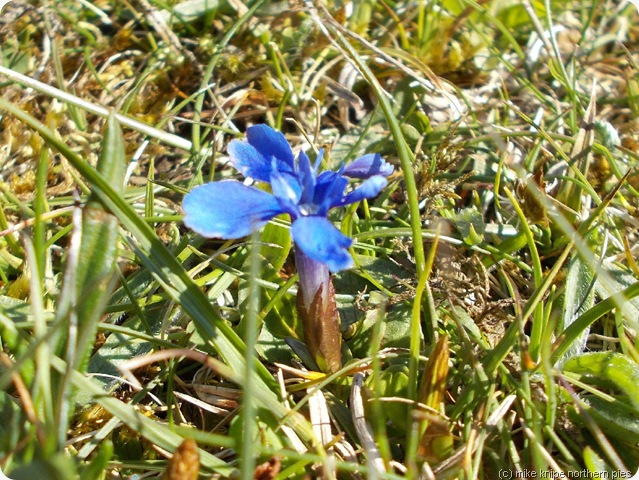 And the Cow Green area is bursting with patches of Spring Gentians. This is the best display for years. Some things obviously enjoy a long and cold winter that lasts till the end of April. 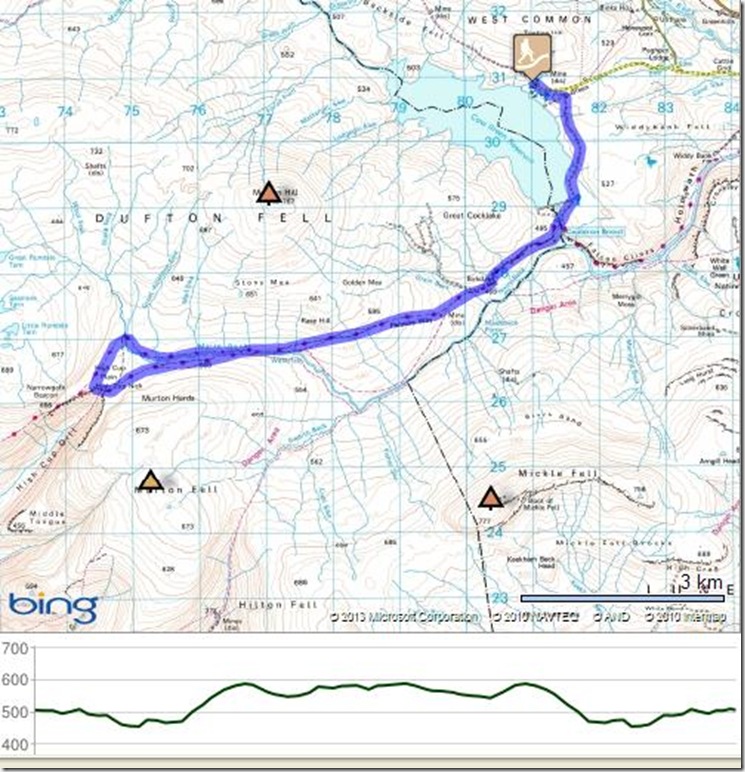 Poor Superdawg. Humiliated in front of his new love by his parent. Have you forgotten how embarrasing parents can be? What if he had embarrased you as you ran around in circles in front of Kylie? He deserves a bone by way of an apology.

Looks lovely. I do like High Cup Nick :-) It's been a few years since my last visit - I shall have to return!

Great post Mike, inspred me to do this walk myself last Saturday and enjoyed it immensely.