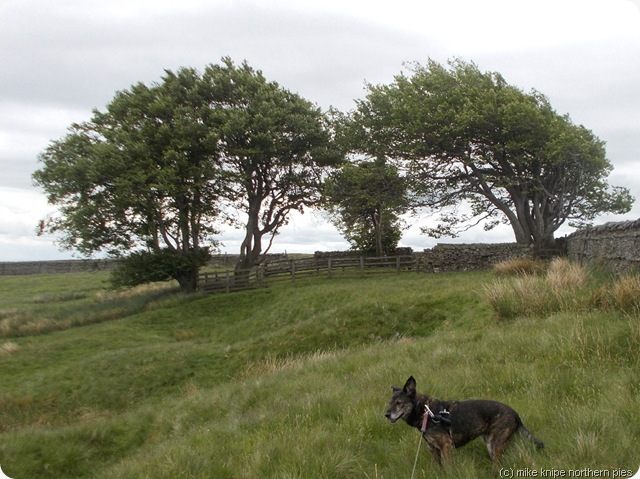 Well, it seemed like a good idea at the time. I first reccied this route on a mild day in January during the few hours when there was no snow. Bruno came too and I ignored his opinion that it was much too rough for a County Council walk and in any case,(according to him)  during the reccy, it became painfully obvious that I had no idea where the path was. 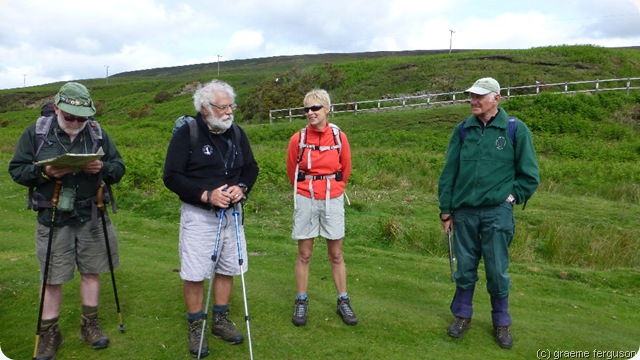 Nevertheless, the route duly appeared on the Durham County Council guided walks programme for this summer (rather daftly timed to coincide with the best time of the year to be a grouse chick) So we banned dogs. Even so, me and a tightly controlled superdawg reccied the walk last Monday and, on Wednesday, 22 dogless people turned up. We didn’t have a Compulsory Dave as a steward this time, but we did have Neville, Doug and Sheila and, just for variety, I stuck in a diversion from the very start. There’s a map of the route at the end of this blog post for anybody daft enough to try to follow this one. If you do, be warned that the middle bit is hard to follow.

We overlapped a little with the previous County walk, around the pretty bit at Fine Gill but then, girded up loins for the rough path over the moors to Little Egglesburn.  Once up on the moor, the gradients on this path are gentle and the path is  much clearer than it used to be, although I’m not sure it follows the line of the right of way very well. It contours around Five Pikes – an easy bag for anybody with a bit of spare energy, and then Pawlaw Pike, with a bit of estate road in between for an easy passage 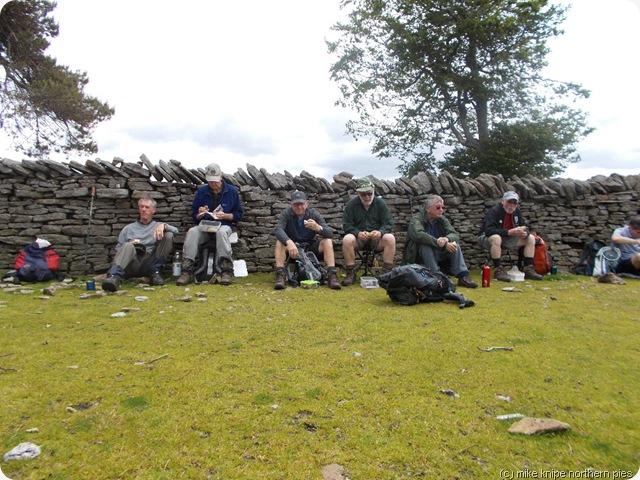 After a brief encounter with the B6278 and some easy tracks as far as Candlesieve Sike, we were eventually faced with the crossing of some rough moorland, consisting of deep heather, short heather, burnt heather, moderate heather and bilberry. (I did mention the amount of heather here…?) As it happened, I’d got a waypoint  of the point where two rights of way cross off the definitive map before we’d set off and this produced a line of march which was remarkably similar to the line of the right of way. Graeme gave a commentary as to how close or not we were to the correct line based on his sat navvy thingy…  On the reccy, Bruno had also pointed out that the path joined up a series of widely spaced and unmapped mine shafts and headed straight for a particular path on a far off hillside. He can be a right clever bugger sometimes…. 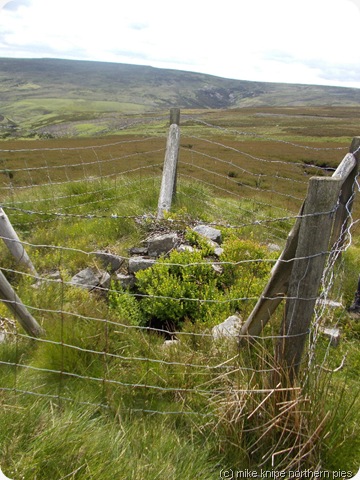 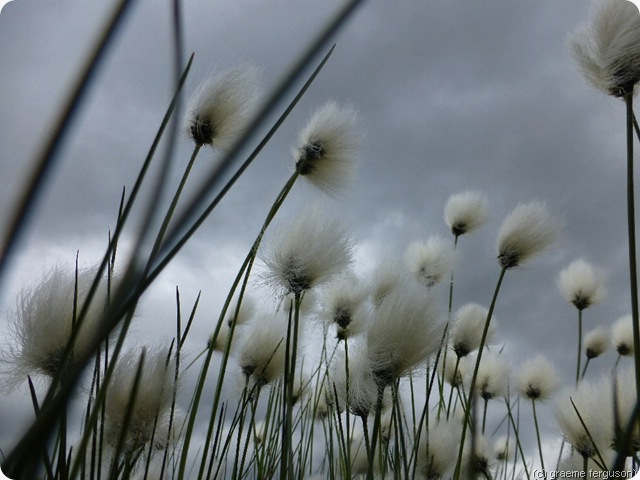 Graeme’s Picture of Some Cotton Sedge

The next section was more difficult. A second waypoint had been loaded into the GPS and this leads, in about a mile, to a spot where the path crosses a fence. A stile across the fence is 400 (ish) metres up the hill to the West. We set off in the roughly the right direction, lead briefly by Neville who was following sheeptracks and gaps in the deep heather. 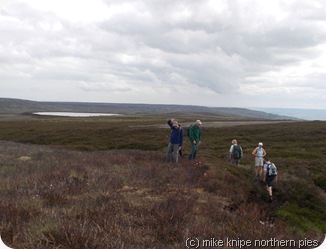 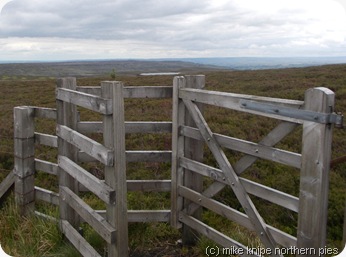 However, aided by more data from Graeme who pointed out from time to time that the path was over there, or, sometimes, somewhere else, we followed the GPS arrow in the general direction of the fence crossing and the public footpath sign on the main road. After a long and energetic, not to say sweaty struggle with yet more heather, a few peathags, lots of cotton sedge and some hidden ankle-snapper ditches, we got to the fence roughly where we should have been although a comparison of our actual track with the line of the right of way shows that whilst we went in the right direction, we were seldom, if ever, on the actual path.  But the ground is so rough here, that to try to follow the path exactly would be harder work than it needs to be. You have to go with the landscape in places like this, y’see…..

Graeme has provided a screenshot of his GPS mappy thingy (sorry for the technical talk here) – which shows where we went and where the right of way is. 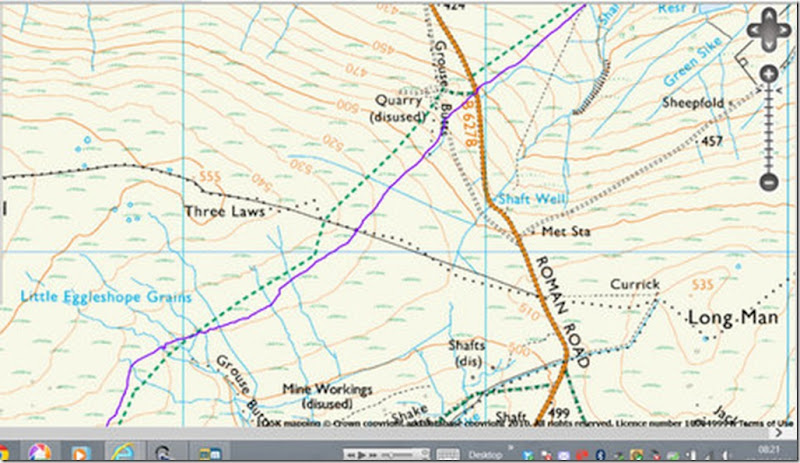 And so, after a little bit more heather and bilberry, we followed the broad ridge down the hill back to the cars, which were all still there…..

Thanks to Graeme for the extra photoes, and to Neville, Sheila and Doug for the stewarding, and to the paying customers who survived with scratched legs, strained muscles and low blood-sugar without  any audible complaint (I was too far ahead to hear much….)

It was either 11.5 or 11.7 miles depending on who’s measurements you want to use. 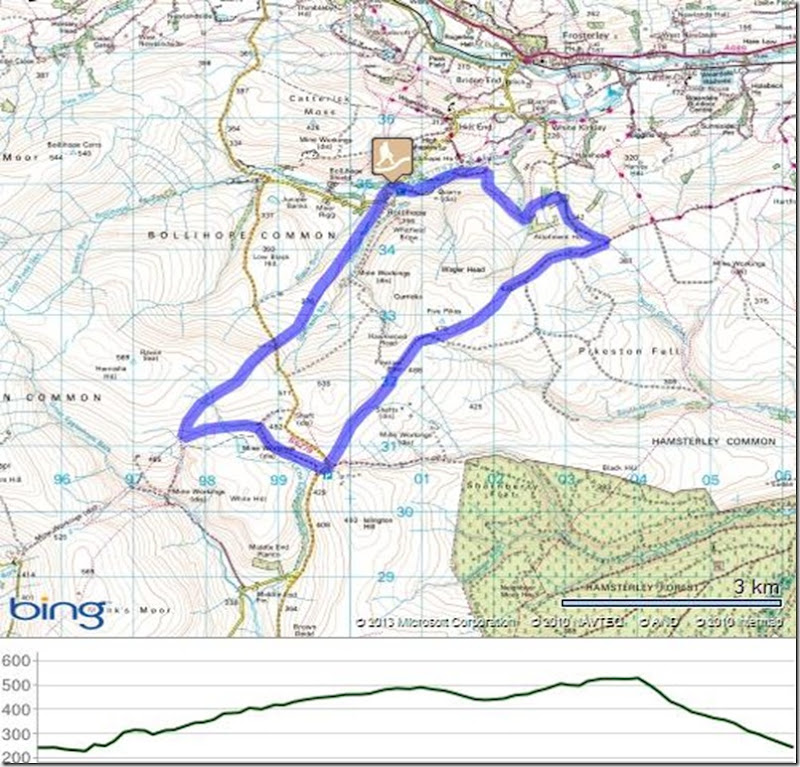 I have never, ever found those little dotted green paths on the 1:25's to be accurate.

The black dotted ones are usually spot on. I reckon they're "eyed-in" by some spotty cartographer on loan from the local college.

Alan - There's a notorious right of way which plummets over Scafell Crag - whereas, the actual path....
Definitive map description probably just says that a right of way goes from here to there....
Dawn - Several characters were enhanced on this mission. It'll be a nice route when the black fly hatch...

Bollihope? Is that not an Indian theatre group.

Oddly enough, Alan, I did once have a walk with a member of Bombay ladies' Rambling Club.
No reason for mentioning it, really...