If It Wisnae fer yer Wellies, Where Wid Ye Be? 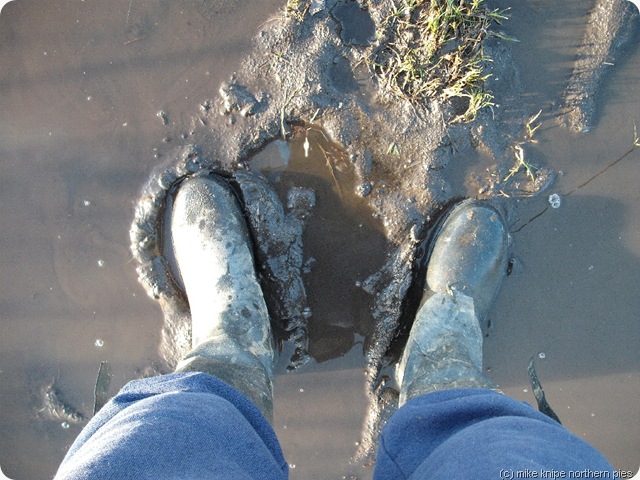 You’d be in the hospital and infirmarie…

Anyway, by this time last year, I’d walked twelve miles, apparently, but due to an attack of Schindler’s Listlessness, I went nowhere yesterday, the most energetic thing I did, being the tuning in of the wife’s new telly. So today, me and Bruno dragged our fat and heaving cadavers out into the warm sunshine to…. justaminnit…. warm sunshine…? 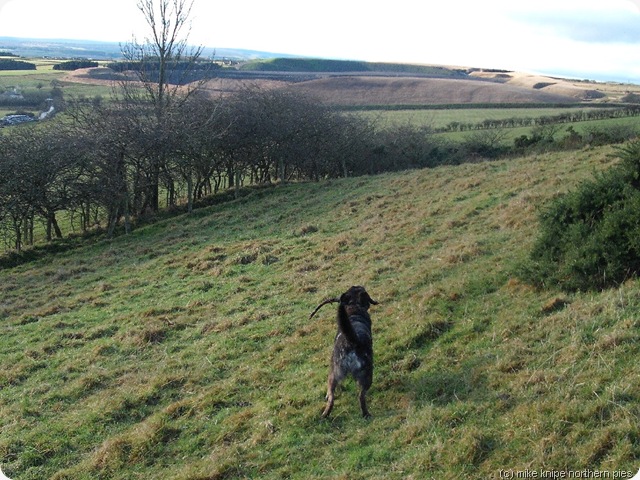 Anyway, it was the day to do one of my adopt-a-path walks. I have two around Crook and I do them twice a year – so that’s four walks.

It was a bit muddy, due to the drought we’ve just been having – in fact, it was still droughting at half six this morning when I let Tammy out of the back door for a wee in the dark. It was droughting so much, in fact, that we all went back to bed with coffee and toast (I had the coffee and toast, the dogs just watched) 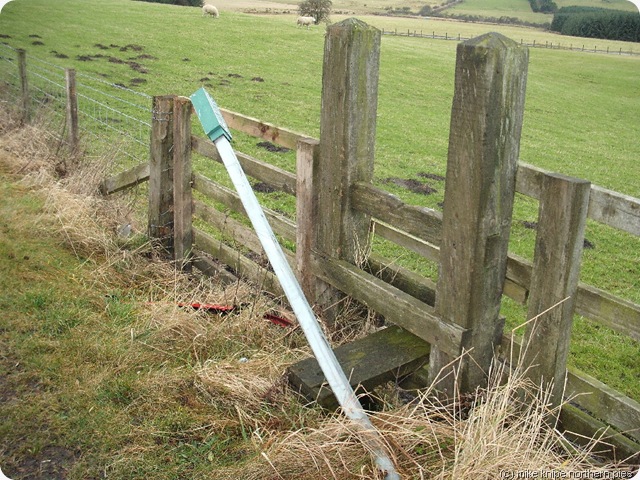 But later, we sallied forth. It was warm. And it was sloppy. And I didn;t find very much wrong with the paths – several of the stiles have been replaced recently and one which had been wired up with barbed wire has been unwired. The only thing I could find was a public footpath sign that had had a collision with a browny-orange coloured car (I could tell it was that colour cos bits of it were still there)

Another stile/wall had also had a collision with a car – maybe the same car – hopefully the same car anyway or else it means that there’s at least two drivers in Stanley Crook who can’t drive around corners. 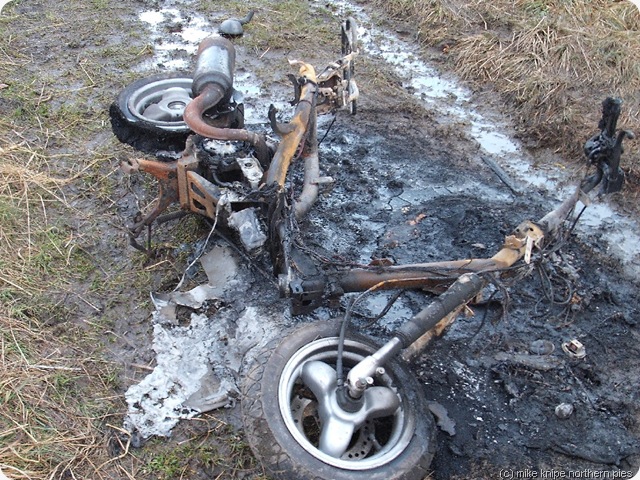 On bridleway 33 (fab views of the Pennines) I also found a scooter that had been badly overcooked (this happens at Christmas, doesn’t it?) I told the cops. They said they’d have a look in case it had been stolen -  although the chap on the reception at Crook cop shop took a picture of his desk, his boots, the ceiling and a street atlas he had out before managing to view the picture of the scooter remains I’d snapped.

I also reported the recumbent signpost to the peeps at the rights of way dept in Durham.

We did about six miles. Bruno destroyed four sticks and an empty lager tin.

Interesting to see your walks summing up. I'm not doing much at the moment, but got some ideas swimming around in my head for future walks.

Wellies a jolly good fellow. We are getting lyrical.

Slaistery. Thats a jolly good word Dawn. A bit deep in the mire for me, i had to go and look it up.

Never mind all that. I am trying to raise money for a 90ft high sculpture of Mike Knipe clutching a pie in each outstretched hand. The Great Pie of The North project needs about, oh..., four-and-a-half-million pounds. So cough up if you want to see a cultural artefact overlooking the Crook branch of Morrisons.

Early days yet, Llona - plenty of time for walkies.
Thanks Dawn - new word, like wot Alan says..
Peter - Hurry up, though, these pies are going cold... I think it should go up along the A1. Scotch Corner.....

Mike, hi, long time reader, first time commenter. Could you plot the location of that turnstile with the broken Public Footpath sign on a map for me? I've written a book called Rolling Over Turnstiles, about drunken rambling adventures, and that'd be an excellent cover photo. I'll credit you in the final print!

Colin - I sent you a message on your website but it did something strange and may not have gone.
Basically, if you email me on my contact email in my profile on the blog, I'll send you a map with the location on it. Be quick, though cos the council may be in the process of putting the thing back up!

Colin - Your email address is being rejected. The stile in question, though is on the road from Stanley Crook school towards Deerness valley - just after the sharp left hand bend after the school.