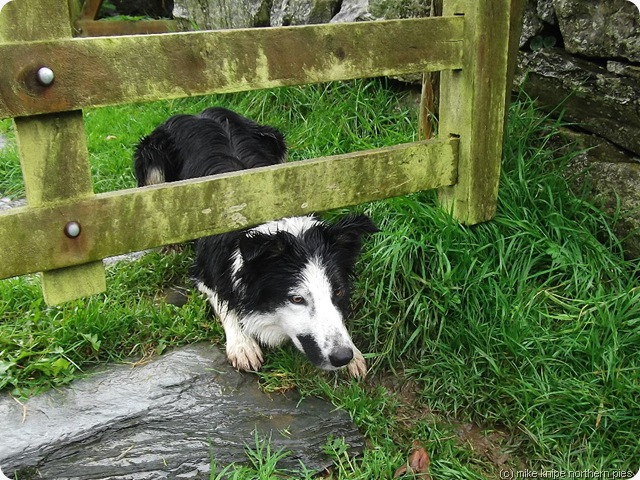 Having developed a bit of a lurgy, a few days off were called for following the efforts on Rhinog Fawr. In order to complete the set , I would, in due course, have to return to Cwm Nantcol and climb Rhinog Fach. In the meantime, Bruno made acquaintance with Argoed’s farm dogs – the veteran meg, who came to nap on our rug, and, occasionally, Bruno’s bed, the Jack Russell, Jack, who just bumped into things, being a bit blind, and Jess, who ambushed Bruno from under the gate, having a nip at his hindquarers as he ran past. Oddly, he didn’t seem to notice this at all and continued chasing the tennis ball we’d found. 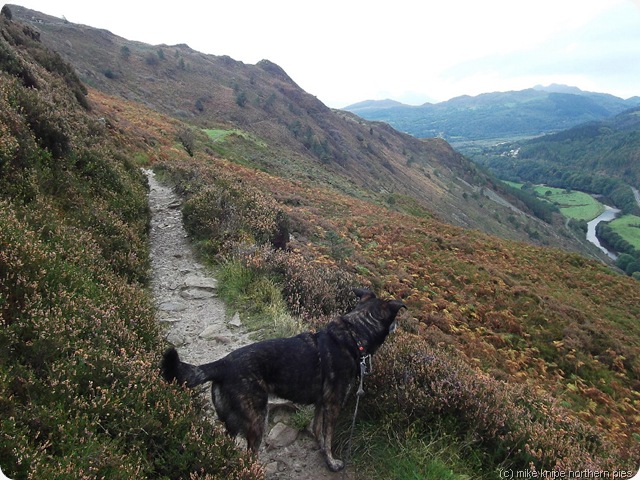 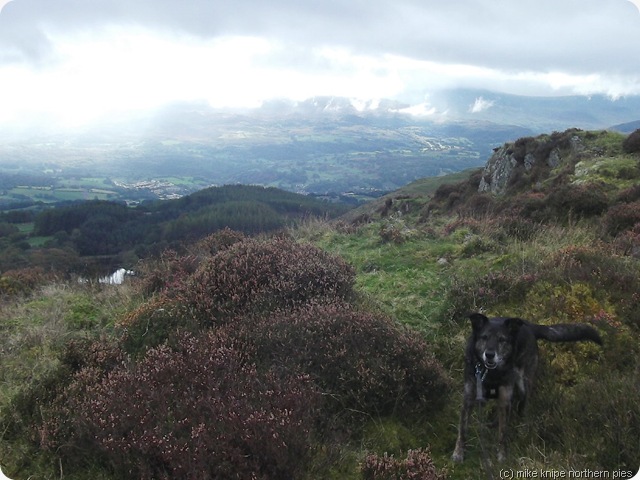 After a few days, and still not really up to par, and the weather being a bit ropey, I contented myself with the bagging of a little Marilyn at Dolgellau – one Foel Offrwm which is short and steep and has a reasonably well-preserved hillfort on the top, and the Precipice Walk – an easy ramble which contours around Foel Cynwych and which, for the effort involved, has some interesting and beautiful situations. We finished by bagging Foel Cynwych. 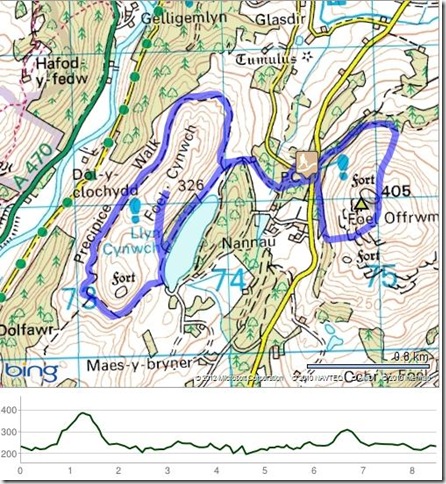 Wanderings around the Precipice walk

And then, three days later, we returned to Cwm Nantcol, paid two quid at the farm at the dalehead for the parking and sploshed off up the soggy path to the bwlch where we’d abandoned six days before. 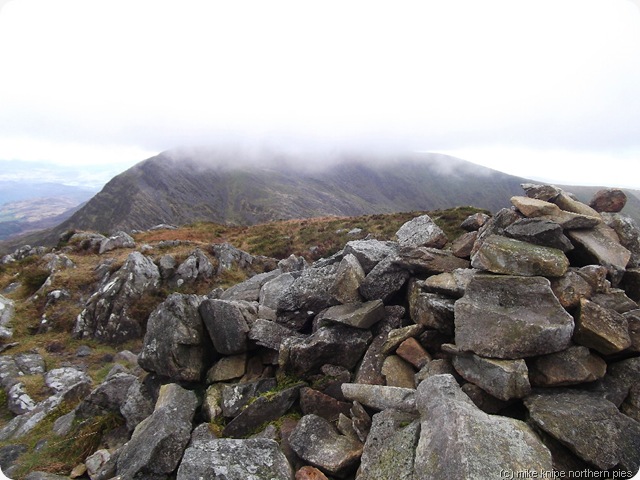 The path from here looks obscure, but on closer acquaintance is perfectly clear. Its very steep for a bit, though, but relents eventually to a more reasonable angle and then, after a final steep lunge for the last hundred metres, it achieves a knobbly summit ridge. 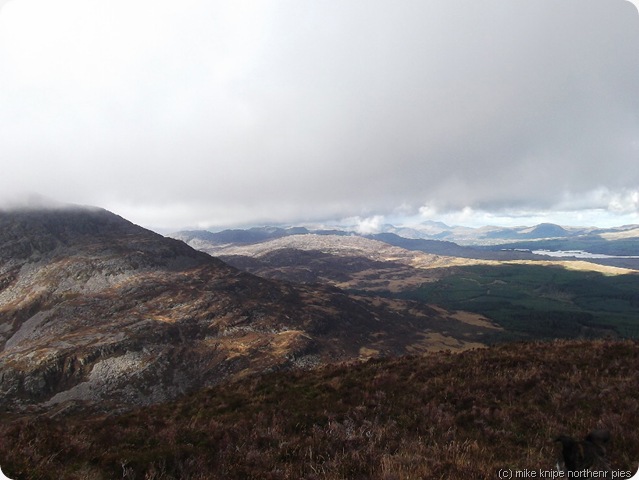 We wandered about on the summit for a while, bagging knobbles, just in case, and watching showers pass by to the North – and we retraced back to the bwlch. I’d thought of descending to the South and making a circle, but the streams were in spate and I’d have to cross somehow to get back to the parked knipemobile. 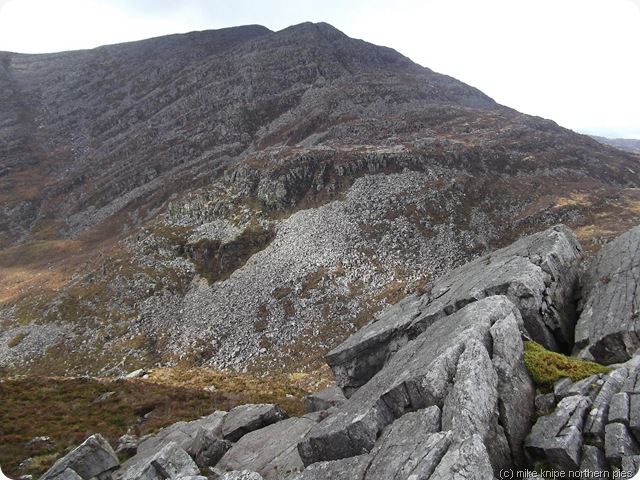 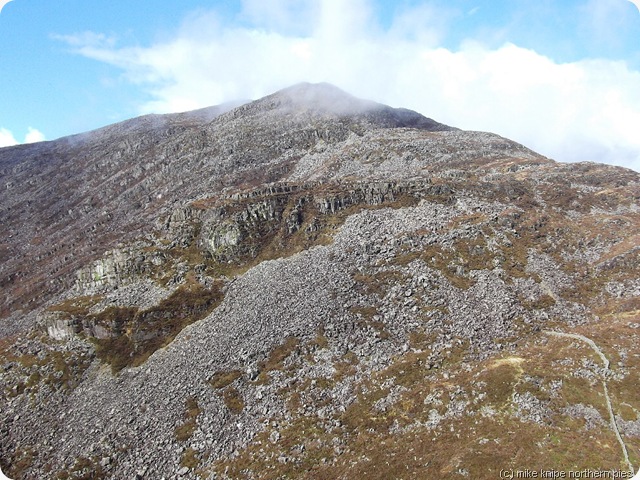 I couldn’t be arsed with this, frankly, and a simple return was called for which allowed Bruno to demonstrate once again his remarkable skill with retracing his route step for step over several miles. His footprints in the peaty bits were testament to his accuracy. This is a trait which could well prove extremely useful in some circumstances, specially if you’ve dropped a tenner and you want to go back and have a look for it.

The return to the Rhinogs was just five miles and about 2000 feet of uphill. 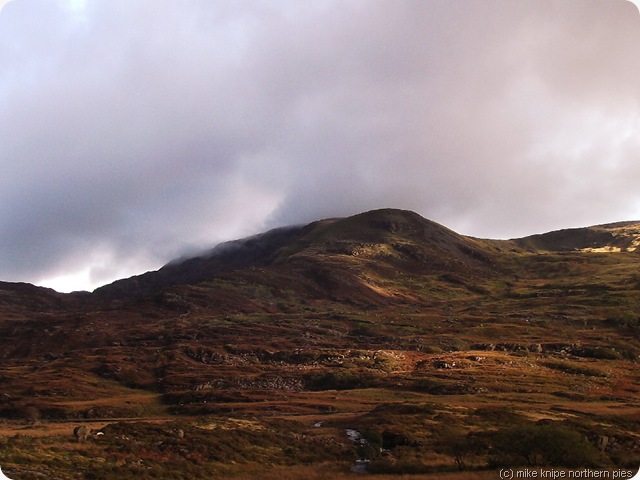 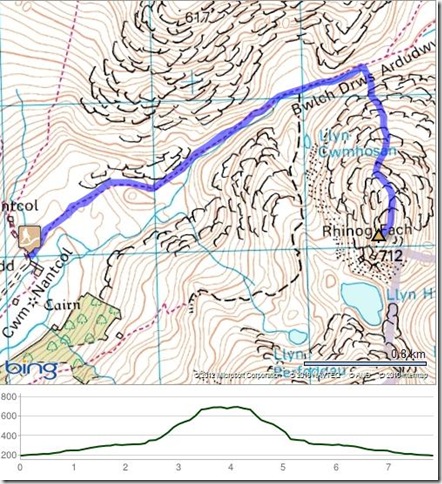 Yes its steep, rugged, slabby, empty backpacking country. Glad you managed the walk in the end.

I enjoyed this area and didn't mind paying the £2 parking.

That is impressive Mike, wonderful scenery, some good wild camping spots too.

Don't think I could rely on Tilly to find a route back, unless we'd lace it with dog treats on the way up.