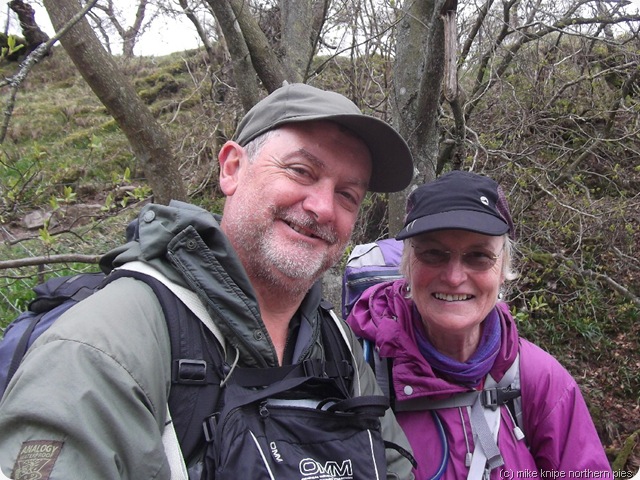 Alan and Fran are TGO challengers and Over the Hill Club members whom I’ve known for donkeys years, in the episodic way it is with TGO Challengers (usually meeting only at random isolated Highland spots once a year and then getting outrageously drunk in Montrose) -  and this year they are walking from Lands End to John O’ Groats and, for the North of England, they’re following the Pennine Way. Their schedule says that today, they will be walking from Middleton in Teesdale to Landgon Beck and me and Superdawg decided to join them, whether they liked it or not.

To complete the ambush, I parked at Bowlees and wandered downstream towards Middleton – so as to intercept them – a strategy which had failed to locate dawn on Jacob’s tea Trail, I should add. 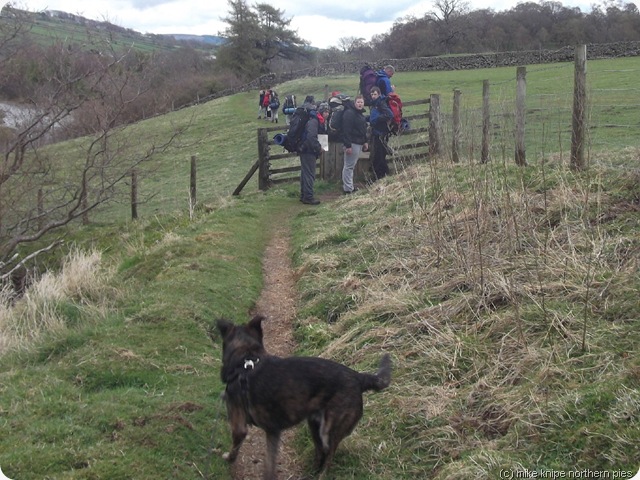 The PW was busy today with a large group from a college (they denied being Dof E and had, in fact never heard of the Duke of Edinburgh , the Queen Mother or the Prince of Thieves and had never ever even considered doing this kind of thing for an award. Or a badge, certificate, tea-shirt, RAB fleece, free Bowmore whisky or anything like that. They’d camped at Holwick and were lumbering just as far as Middleton today. 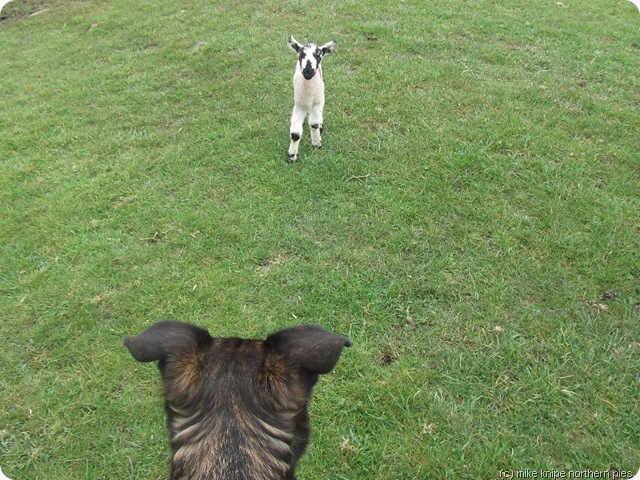 Coming from the other direction was a large group of schoolchildren with some teachers, one of whom had a beard and explained to them how to identify an ash tree, whilst standing next to an ash tree. These sproglets were nice and polite and, apparently enthusiastic about ash trees and their black buds and the lichen and all kinds of other stuff, and almost to a sprog made a big fuss of Bruno which he enjoyed immensely and soon trained several of them to scratch his back in exactly the right spot to produce doggy heaven. Any longer and he would have been eating their sandwiches and crisps. 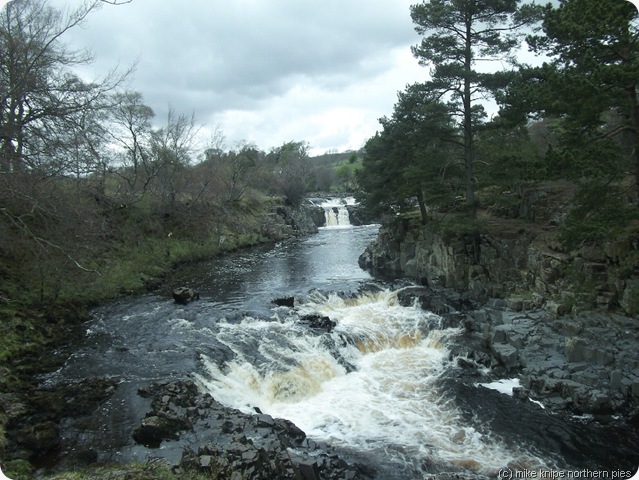 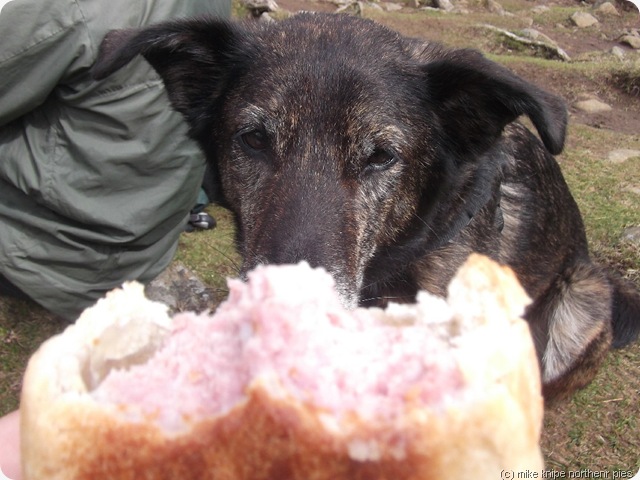 Fran and Al appeared a few minutes later. It was nice to see them. They’re looking slim and healthy and we wandered up the PW past the schoolkids (paddling in a small beck), past Low Force and the stone sheep and up to High Force. We had pork pies for lunch (well, it had to be pies, innit..?) The local robins, chaffinches and bluetits visited and chirped for crumbs. Bruno hypnotised a pork pie with a view to a pastry-based suicidal leap into his warm and comforting jaws – but I rescued it just in time. Hmmmm, pies, dribble…….. 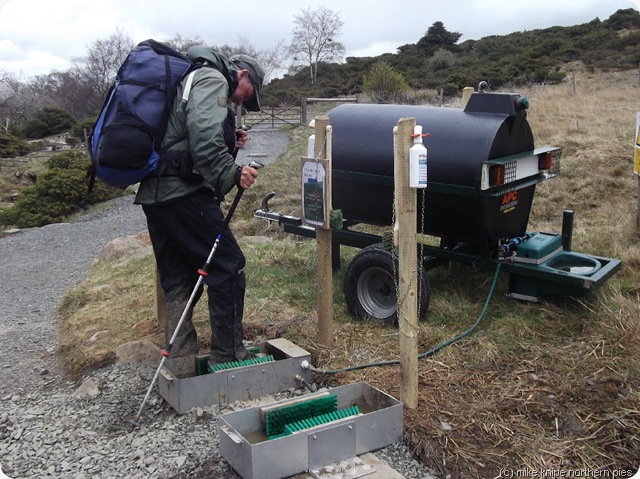 The juniper woods at High force are under attack from a tree-killing fungus and at each end of the wood there’s a boot-cleaning station involving brushes and sprays. We did the necessary, but I guess that some people might not bother – in which case, this might be not much more than a symbolic attempt at control. I didn’t dip Bruno’s paws in the stuff, in fact, not knowing what it was. 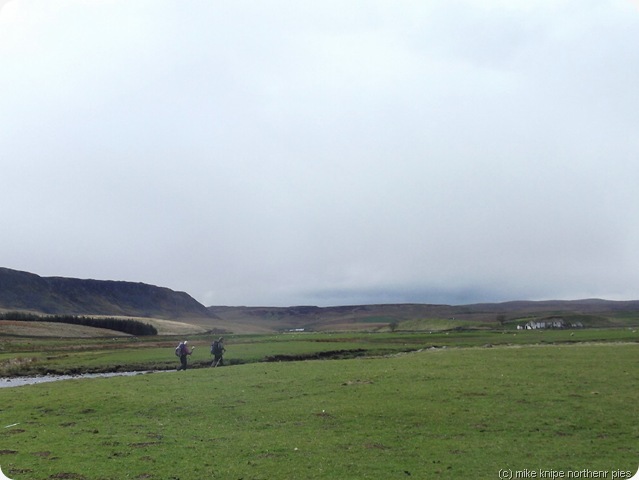 Its been a cold day with just a little rain – good for walking, in fact.I expect Fran and Al will finish their LEJOG – they seem to be going well and there’s friends walking with them on various stretches up the country. It could well be back to reccies for a bit for me. Or I might just slide something Cumbrian into the programme.

I bet they were glad to see an old face, oops sorry, old friend. I'll get me shovel.

Those eyes on Bruno - I was nearly hypnotised myself...almost found myself sorting a food parcel out for him...

what Bruno still wanted a pie after eating a Lamb ?

I've never seen Bruno admit to being full, Dan. It was a fairly new lamb anyway - not much meat on them for the first week or so...