How to Get Really Wet in the Lake District 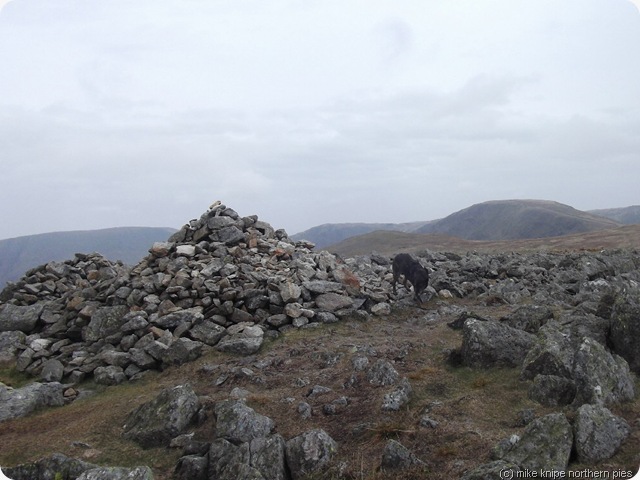 Ignoring, or , rather, avoiding the weather forecast may be a risky strategy when intending to have a walk in the Lake District. The problem is that at the moment, all of the forecasts are so dire that if I take any notice I’ll never get out for a walk, then I won’t use any calories, then Eunice (the Fat Nurse) (not the fat nurse.. the nurse for fatties..) will not be happy and I have an appointment with her tomorrow afternoon….

So, on a grey but dry Sunday morning in Crook, I headed the knipemobile West up Weardale, over the hill (frozen this morning) to Alston, Penrith and Martindale to the little church on the hause above the windy road with the hub caps (this last phrase translates really well into a Welsh place name, by the way) 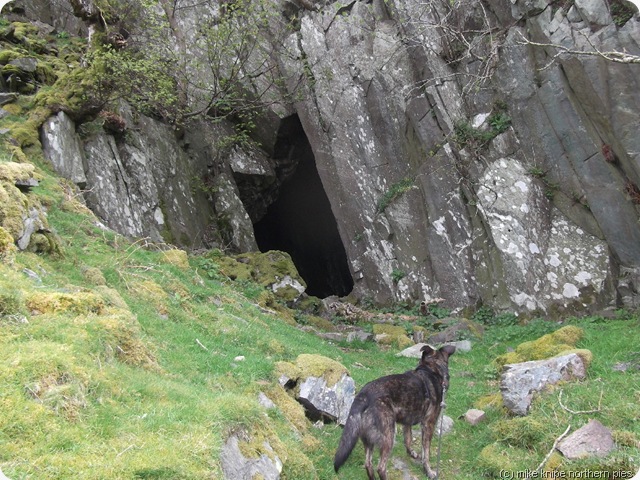 There’s a path from the other church in the  boggy valley with the yew tree which heads up to the High Street roman road and passes very very close to Gowk Hill, an unbagged Birkett, in fact the only unbagged Birkett for miles and miles…

I lost the path early on and found an interesting slate quarry/hole instead. This navigational challenge was soon resolved and not too long later I was standing proudly on the unremarkable summit of Gowk Hill. Bagged. Ding! 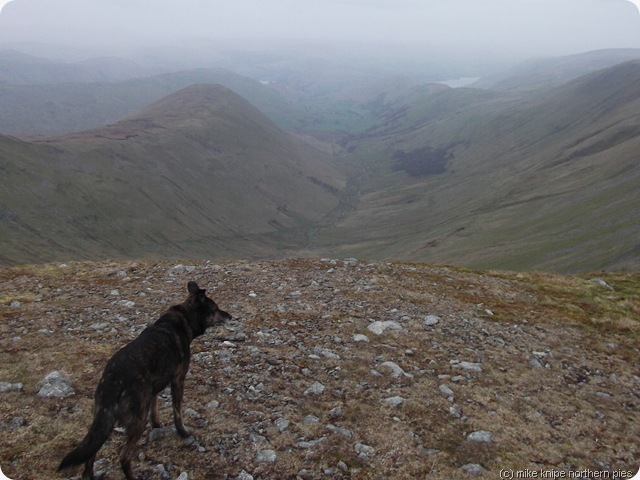 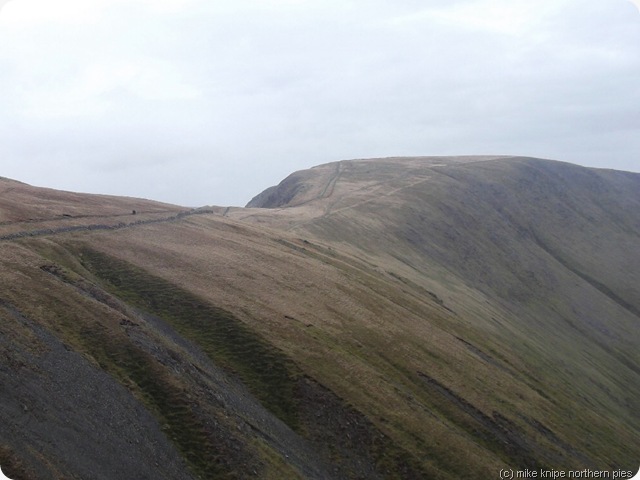 A good path took me up onto Red Crag where it was cold and with just a hint of snow in the wind, and then on to High raise (the Mardale one, other High Raises are available…) where it was sleeting and hailing a bit harder, followed by Rampsgill Head (nithering drizzle) and down to The Knott (cloud base starting to touch higher hills). This deteriorating weather gave me a really good excuse good opportunity to practise finding a quick way off the Fells instead of heaving the aching legs and body up Rest Dodd. 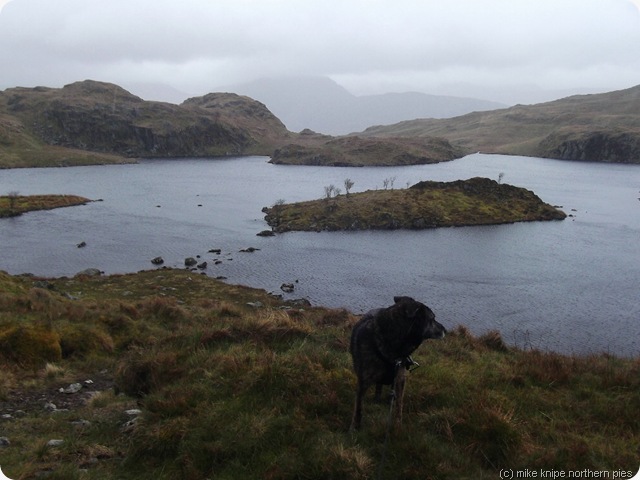 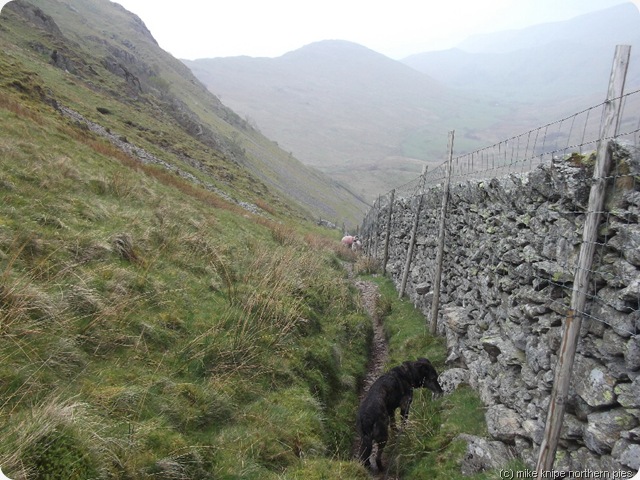 So I followed the path to Angle Tarn and crossed the grassy ridge to find a sheltered path by a wall leading down into the cosy depths of Bannerdale. It wasn’t that cosy, really, in fact, by this time it was chucking it down in a very Cumbrian kind of way. The next few miles were only glimpsed beneath a hood through drippy specs. A farmer with two dogs was very chatty about it all and mentioned how it had seemed to have warmed up over the last half hour… I don’t think it had, really, to be honest…

We returned damply to the car after about five hours, half of which were specially wet hours.

The drive home was interesting too. It seems that the Helm wind may have been blowing today. An HGV was wheels-up in a field and we all got buffeted around.

The walk was about eight fathoms. (11 miles) 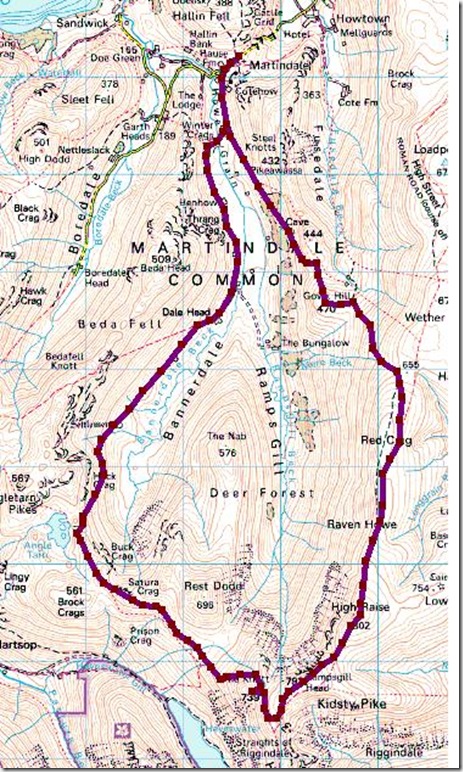 The welsh name is of course "Eglwys Bach ar yr bloodich hubbcapiau". As I'm sure you knew.

Nice walk again Mike, looks very impresive over that neck of the woods. I will have to try and get over there I really must, even though I don't drive I'm determined to get around the Lake District - after all Wainwright did!

We forgott the "Hause" bit Peter. Putting it in gives Bwlch yr eglwys bach a yr bloodich hubbcapiau.
Alf (good grief it's a woman!) Wainwright had the advantage of living in Kendal, of course, Fell Finder. And he had long since stopped bothering with his wife who was only a mill girl whilst he was white collar.
My mum was only a mill girl...

Did you appen to see any deer. You can usually spot them in this area.
We got out of the Lakes mid morning so missed the rain but got a battering from the wind.
I don’t envy anyone who got up high on Sunday afternoon.

Dreich is understating the afternoon, Dawn. I think it probably got a lot worse as well...

I didn't see any deer, Alan, and even only a few sheep and, maybe six walkers.... and three dead sheep and a dead lamb...

Tough luck picking Sunday Mike ,we were up in the same area from Hartsop the day before and it was bright and sunny if a touch windy earlier. Mind you,the Nab and Rest Dodd (rest my *** its steep!)were as boggy as ever.

Still made it to Booths by 5 for the special cake and coffee offer.

Ah well, couldn't do Saturday as we were trying to get the new BT Internet wireless thingy to work. We resolved that one with a wire (dhuhh)
Rest Dodd is one of those ironic names, I think.... (not as big as it looks, though)

Nice looking route, although I have to say that we're really skilled at getting wet in the Lake District too. One of the reasons in fact that we gave the area up several years ago and discovered the wilds of Northumbria instead...and of course it never rains in my birth county of County Durahm...

Ashley, it was supposed to rain today but it didn't.