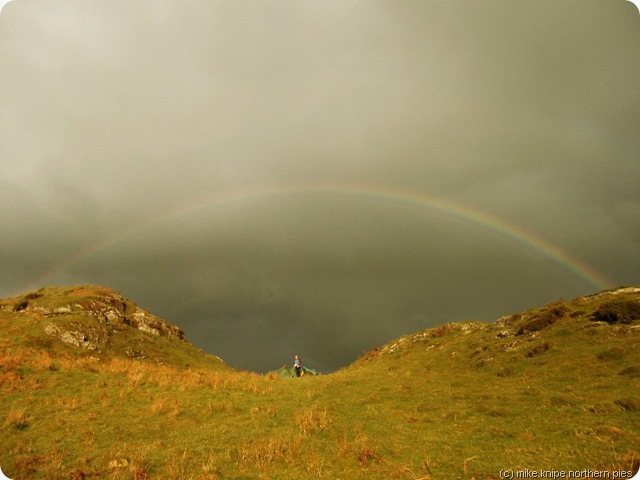 The End of Part One saw our hero and heroine settling in for a quiet if drizzly and windy night in a small conifer plantation in the Wettest Glen in Wales. The night drifted in and dusk settled on the dripping landscape of Mid Wales. Each of us in our cosy dens,  minds turned of, relaxed and floating downstream as Beatle Lennon would have it. Kylie visited. It was during the dark hours of midnight(ish) when the frantic struggle with Kylie’s technical bra clasp was reaching desperation when all the lights went on. “Sorry to disturb you” came a voice, apparently from a tree, “We’ll be very quiet. I’m setting up a bivi at the bottom of the wood.” Voices and lights continued for a bit, then it all went very quiet. Impressive, I thought. Back to the clasp….. 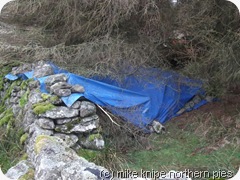 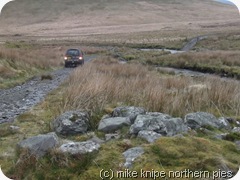 An hour must have passed. The lights were on again and there were voices and laughter and tent poles and pegs being knocked in and clanging and droning  and farting and laughing and rustling and all kinds of stamping about. I had a brew. The noise grew. Kylie had gone home. I anaesthetised with a slug of 40%. The noise grew more relaxed. I went and offered some free advice, partly in the form of an easy quiz. One of the questions concerned how long did they think it takes to put up a tarp? (Correct Answer - Not as long as this is taking) Another was a query as to the identity of the loudest (female) gobshite. A pale-faced waif with a Manc accent stumbled into me and explained, vaguely, that she was  “looking for a boulder”. Puir wee mite…
A very short time later, it went very quiet. Only the wind roaring in the branches and the splatter of yet another shower disturbed the darkness.
In the morning, I couldn’t help noticing that the atmosphere amongst the group was a bit subdued. A  proper “leader” appeared and apologised. i explained that this was the second night of noisy DofE group, the failed struggle with Kylie’s lingerie, the dwindling whisky supply, the rotten weather, the tendancy towards irritability when faced with hoodies in the garden late at night and the itchy bum. We parted in better spirits. I noticed that they had breakfast delivered by Range Rover. Not allowed to drink the water y’see. Health and safety, I expect. 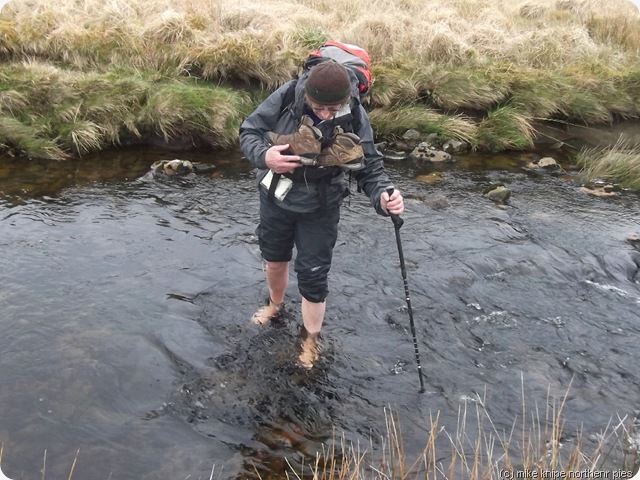 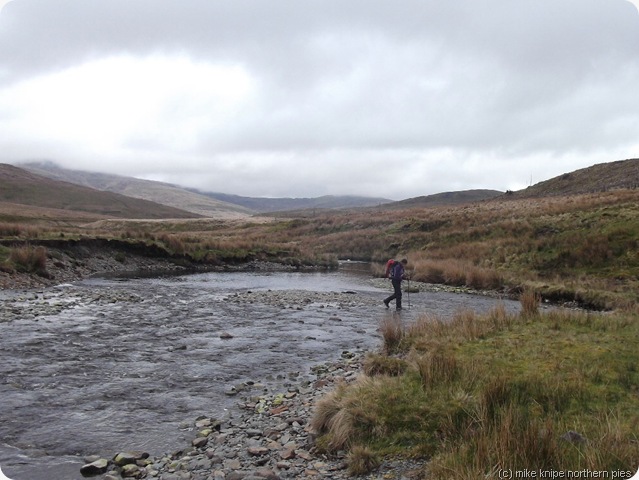 We packed and left and crossed the footbridge and paddled a smaller burn for a mile or so tussle with tussocks before we found a reasonable path, which in turn found a track which took us into the forestry. We had a short day today because the original plan would have had us camping at the other end of Pumlumon, but as it was, we hadn’t moved. So it was a short day. Around lunchtime, we prospected for camping spots but found none suitable (suitable means out of sight, out of mind, flat grass and good water). By early afternoon, in heavy rain, we tipped up at the Angler’s Retreat, a bijoux fishing hut by a small lochan which  provided a secluded camp near a small quarry. When the rain stopped, this proved to be a suntrap. An afternoon of luxuriating and brewing developed. 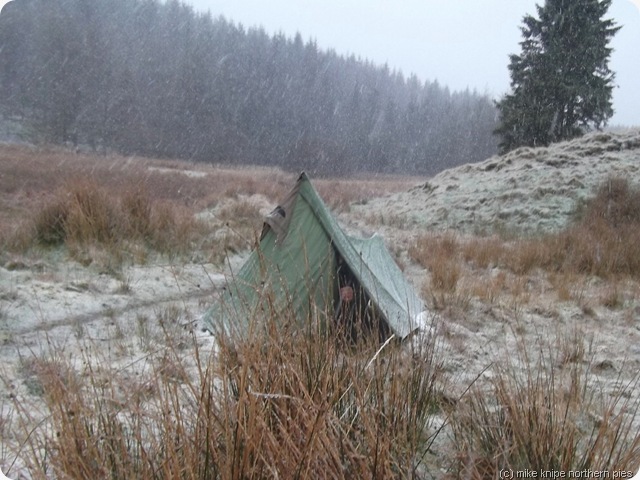 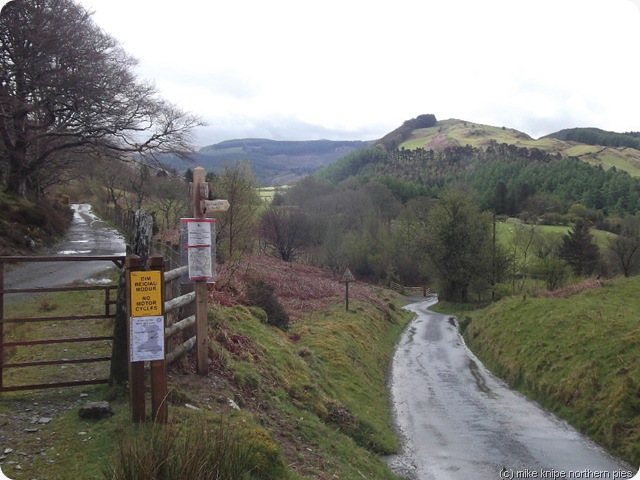 Friday was going to be a short day anyway, so we didn’t have to hurry the setting off. The morning was cold but dry and the process of breakfasting and packing was relaxed until…..  heavy rain burst upon us. This soon turned to large hail, which in turn became splattering wet snow. This went on for an hour or so until everything was truly soaked and/or iced. Eventually, I shook as much of the sticky ice off the akto and packed it up and we left for Machynlleth – at first of forestry tracks and then on a pleasant if stony bridleway and then minor roads into the Llyfnant valley where we began prospecting for camping spots once again.
Eventually we ended up at the spot we’d camped at on the first day. This is a pleasant and very quiet place – we only saw one runner and a chap walking his three dogs in the morning. The evening was peaceful and the weather benign. 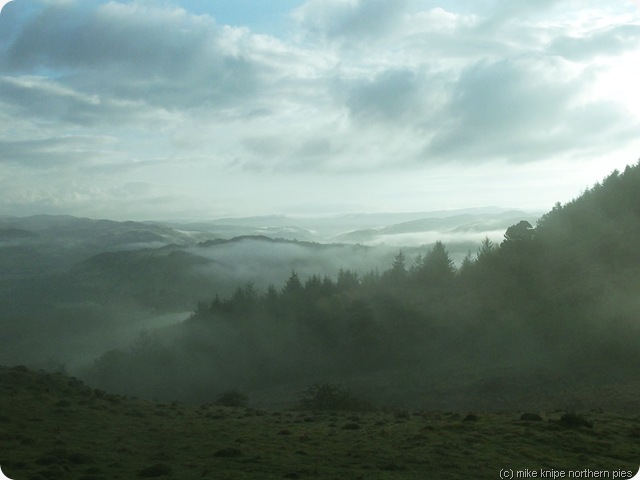 The night was cold, though and the morning brought a cloud inversion over Machynlleth and a typically Welsh broken, misty landscape which for a brief period was warm and sunny and melted the frost on the tents. Then the rainbow appeared and within a few minutes it was raining again. 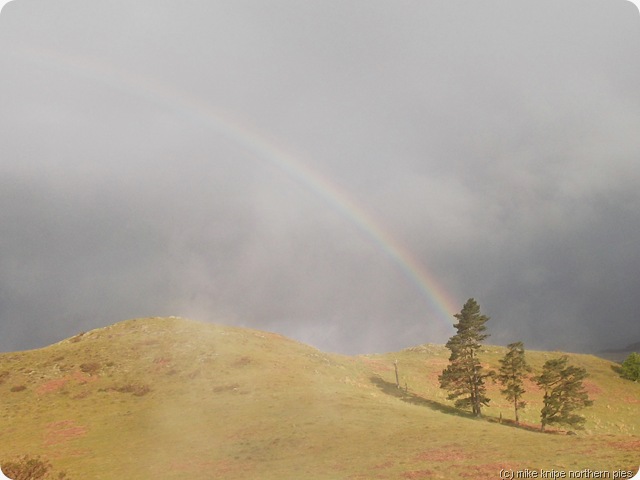 As a pre-TGO shakedown , this was a useful trip. As a jolly jaunt, it was great fun, despite the Duke of Edinburgh’s best efforts and the typically TGO weather. The last two days were short and the middle one was even shorter, but carrying five days food is a good exercise and the approach to Pumlumon made the hill seem very wild and remote (Its not really, if you come from the other side) Thanks to Dawn for the company and specially for the breakfast and the orange chocolate drops – and for worrying about whether or not I was still alive during a pause in the snoring.
Lessons learned – things to do prior to TGO – Proof the tent and mend a hole that’s developed. The stove is great, roars like a jet engine and a 250 gram canister will last five days and a bit more. My boots leak – I have a spare pair which I will need to use extensively between now and TGO time.
I need a new map case. And I carry far too much food. I need to calm down a bit. The Akka down jacket will be going to Scotland. This is a fine and comfy thing and is a great pillow as well as being a cosy jacket for camping in.

Sounds pretty dreich. When you see somebody camping wild you usually give them a wide berth. What are they teaching DofE? Or was it that there was just nowhere else to pitch? Or it was their pre-arranged spot that you and Dawn just happened to pick as well.
Summer eh. Lovely.

Aedan (our eldest son) is doing his practice D of E exped bank holiday weekend. He goes away 14 and comes back 15 and it's only overnight! Around Tomnavoulin and Glenlivet way, should be nice.

Glad you survived! But, after your earlier taunts about water levels, you knew you'd tempted providence, didn't you?

BTW, we've just been in N Yorks, where the weather was OK really.

It was a good trip Mike, most enjoyable. Many thanks.

Alan - It was first week TGO weather - DofE peeps apopear not to have a plan B. In truth, its very soggy everywhere except the wood.
Louise - Tell him not to camp near any old fogies, or he'll come home having learned some new words.
Jules - OK, you can have some water... we've got more than enough now. On the other hand, my lettuces are growing nicely...
Dawn - It was a cracker, actually... and I found a mouse in my food bag..

Glad to hear that Mike. You can't have too much lettuce.

I'll let you into a secret - I did briefly have a stint at training DofE kids for their Gold Expedtitions, but eventually gave it up as I became very disillusioned about a) the things we were supposed to be teaching them, b) the things some of my colleagues were teaching them, c) the way some of my colleagues were covering for them when they hadn't turned up and d) the general attitude of the kids (in my case, very middle class who weren't really interested, just wanted to be able to put it on a CV). Having said all that, I'm sure there are many groups out there who are doing a good job!

Wet walks. Character Deforming stuff. I always carry too much food as well. Deprived childhood.
:-)
I have a few running repairs to do too - I need to sew on some new legs. the present ones are crap.

Jules - Ashley, lettuce is the vegetable of the devil. I'm only growing it because I bought a grow bag on a whim.
Chrissie - Its not a secret now! You could tell us more and beter particulars, though....
Alan - You're right. It is character deforming, so thats good for the chally. Too much food and not enough scotch was the verdict. I didn;t mention the last one in case it confirmed me as a sot.