Pennine Way Bowes to Tan Hill (and back) 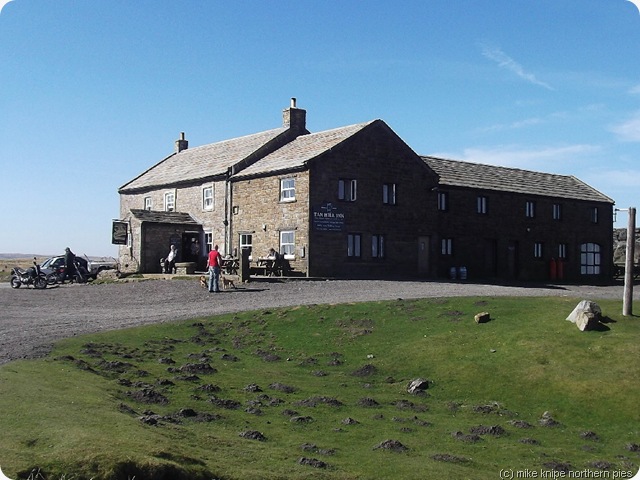 This is the very last reccy of one of the summer guided walks routes, although I’ll have to reccy all the fifteen walk routes the week before they happen. I’d delayed this one till after the clocks sprung forward last weekend – mainly so I had enough daylight. The walking is quite easy, though, so it would have been OK, really…

Anyway, I’d warned superdawg that this walk was a bit longer than the others, so he’d had a few extra doggybix and a drink of tea, and we’d arrived at the village hall car park in Bowes to discover a couple of chaps from Sunderland and Ivy, one of the regular DCC guided walks customers and veteran rambler extraordinaire. (she’s 78 and doesn’t use those new fangled map things….). Ivy was intent on having a ten mile ramble and set off a few minutes before me and the dawg. 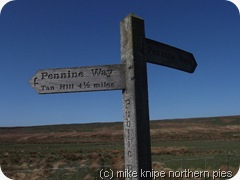 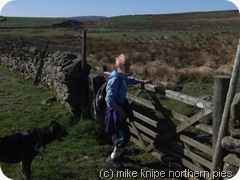 We headed off towards Edale, up past the castle and through the lambing fields where we caught up with Ivy who declared her intention to accompany me for a bit to make sure I didn’t get mugged by a ewe or become lost or attacked by a starving band of disorientated ramblers (such as the ones who live in Crook) 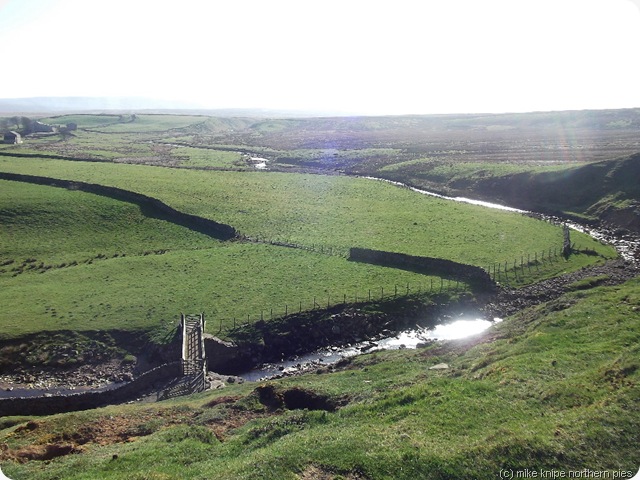 So, we wandered up (or is it down..?) the Pennine Way not looking at maps and only going wrong once. At Sleightholme, where the Way turns off the road to follow Frumming Beck, Ivy turned and headed back towards Bowes, intent on doing “a loop”. She reckoned she’d have done her ten miles for the day. I suspect she was probably right. Interestingly, when you work out the “doggy years” thing, she and Bruno are the same age. Bruno is slowing down a bit, or , at least, calming down a bit, but is still, very much, a daft pup. 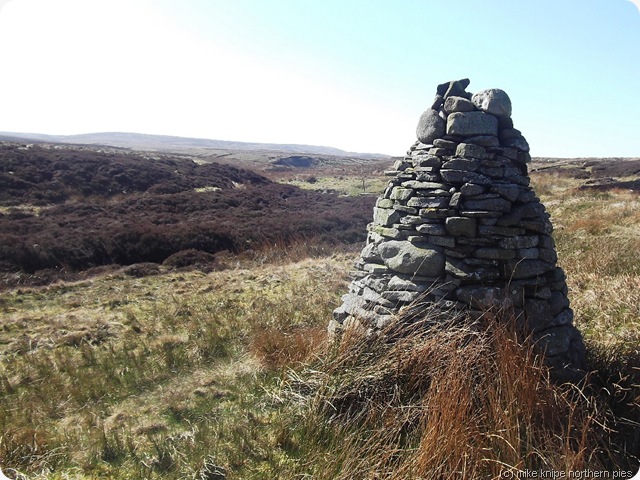 We lunched by the beck and trogged easily up the path over the moors to Tan Hill. This path is notoriously soggy, but not today. Progress was quick and easy over the parched moor and we were soon relaxing in the cool of the Tan Hill bar with a pint of Black Sheep. I copperred up (as my granny used to say) and discovered that I had just enough for a second pint of the same, leaving just twenty one pence for emergencies. Since there were no likely emergencies which would involve spending money between here and Bowes, I opted for the second pint. Had I had more money….. 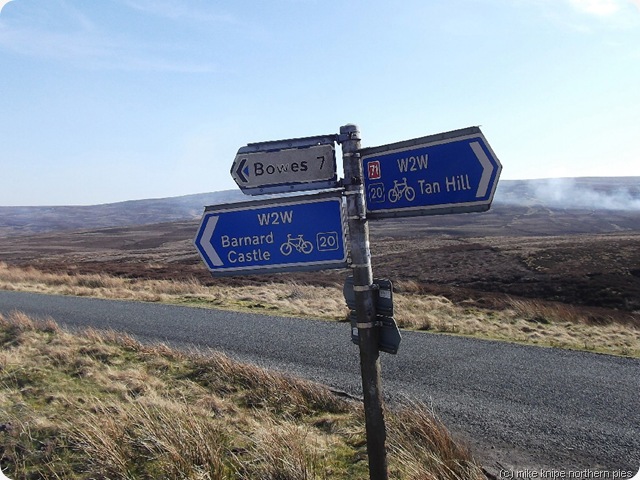 A bit later and in a happy mood, I took the Foul Weather Alternative which involves walking down the road and a track back to Sleightholme – just to see what it was like. I may do this anyway on the actual walk just to introduce a bit of variety and the possibility of a fatal accident with a speeding motorbike. Another option is to use a deep gill running North from the road to join up with the PW below the soggy bits.

The return route was just a long plod in warm sunshine – all very pleasant. I got back to Bowes at six o’clock, which was just about eight hours – seven hours walking and one hour nursing a Black Sheep or two. It was 17 miles and 1500 feet of uphill.

Oh, you're going to be well fit by the Challenge Mike. I won't see you for dust (so you could wear your holey breeks and I'd never know!) and when I do catch up, you'll be on the outside of several pints.

Louise - I must get some new kecks... 'course, if its hot, I can wear me shorts although the rolled-up socks keep falling out of those.
You might be right about the beer, though... you have to stay badly focused on an event like the TGO..

Black Sheep - cracking brew. Only got it in bottles down here in Pastieland, though. I remember havong a few shandies in the Tan Hill when I were a lad.

Make the most of the sunshine before the snow comes...
When Dixie and I were up at the Tan Hill last year, we could hardly walk upright 'cos of the wind. Brill...

Quite a good article in TGO about the swearing landlady at Tan Hill. She is quite a character;)

Yes, the wind can be bad for walking, Chrissie. I recommend Rennies.. Snow coming!
Mark - I've not witnessed any eccentric behaviour at Tan Hill, but then I probably wouldn't notice. One lass (not sure who she was) said "I feel loved" when I ordered a pint back in the summer. I told her I felt loved as well.

Nice one Mike, can see I shall have to slip a few rocks in your rucksack, otherwise I shall never keep up!!!!

I wouln't worry about the speed, Dawn; ,my fast forward button hasn't worked for some time. We'll have none of this loose talk about rocks...!